A little over a month ago I used my weekend column in the San Mateo Daily Journal to make the case for an idea I’d had to help our area’s restaurants to reopen: closing streets and allowing restaurants to use much of that space for outdoor dining, at least until we no longer need to fear the Coronavirus. Great minds think alike, it seems, since I’ve started seeing stories of different cities throughout the country (including New York City) doing just that. Close to home, the city of San Mateo is taking steps to expedite the process for allowing restaurants to utilize both the sidewalk and the parking area in front of their stores for outdoor seating — once the county has green-lit sit-down dining again, that is. In my column I proposed that we close Broadway between El Camino Real and Main Street to vehicular traffic, shift pedestrians to the center of the street to get them safely away from diners, and turn over the sidewalk and parking spaces to both restaurants and retailers wanting to make use of the space. This would not only allow them to spread out their tables so that a safe distance can be maintained, but also to put more people out into the fresh air, where the chance of viral spread is apparently lower. Because restaurants operate on a shoestring, and because their economics require a certain number of customers in order to break even, many are not going to be able to make the numbers work out if they can only space out tables within their existing dining area.

I know for a fact that at least one City Council member read my column, and based on comments at last Monday’s City Council meeting it seems that some, if not all, of the City Council members support the general idea. Ian Bain even noted that we should do this in other parts of the city as well, including in Woodside Plaza, Roosevelt Plaza, and Canyon Plaza (presumably that’s the small shopping center at Oak Knoll Dr. and Canyon Rd., where Sancho’s is). I’m pleased that the city is at least thinking about what it might take to help out some of our most vulnerable businesses, although I do wish that things would move along a bit faster: at the rate that Governor Newsom is relaxing our shelter-in-place order, I worry that restaurants will be back open for in-store dining before the city has a solid plan in place to help. The Council has yet to have an official discussion on the matter, although it appears that it will be on the agenda for the June 8 meeting. Our area has already lost a restaurant or two (The Van’s in Belmont just announced that it has permanently closed, and, from what some of the councilmembers said, it sounds like Milagros in Redwood City is giving serious thought to their own future), and I’d hate to lose any more just because we didn’t move quickly enough. Not that I believe that outdoor dining is a cure-all, but it just may be enough to push some of our restaurants back into the black. And given that we are heading into the summer season, outdoors is a great place to enjoy a meal anyway.

At least one restaurant isn’t waiting for the City Council to take action, it seems. As I walked down Main Street I watched a contractor building a platform in the parking spaces in front of Angelicas, presumably so that they’ll be able to put some of their seating out there, as a number of restaurants along Broadway have done in the past:

I actually have some good memories of eating in the street in front of Angelicas, back in the years when Redwood City held its downtown concerts on a temporarily closed-off Main Street, just across from this restaurant. Good times…

Back on the subject of future City Council agenda items, the Council is tentatively set to hear a “Safe Parking” proposal from city staff in a mid-June meeting. That’s another topic I’ve written about before that seems to be taking a long time to turn into action. For those of you whose homes are on streets where people are living in their cars or RVs — along Stafford Street, for instance — I sympathize. Especially with that giant Kmart parking lot just sitting empty — which is especially poignant given that Walnut Street next to our now-closed Kmart store is one of the places where people are living, in some really awful conditions: 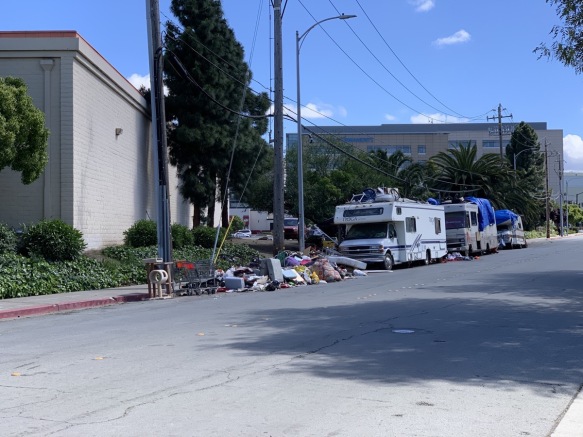 I took the above picture while on a walk this week. I was out to take a look at what, if anything, has been going on across the freeway while we’ve been sheltering in place. I had hoped to sneak under the freeway near where the Highway 101 Underpass project is being constructed at the end of Main Street, but the homeless have moved back in under there, making for a crossing that just doesn’t feel safe. Instead, I ended up using the Maple Street overpass and walking along the path that leads to the Bridge to Nowhere. Unfortunately, though, there was activity along the path behind the LifeMoves shelter that indicated that people may be living there, too, so I decided not to make the full journey. I ended up settling for a view of the Strada project (131 townhouse-style condominiums to be built along Redwood Creek, where Docktown Marina existed until recently), which was put to sleep when construction was first banned and continues to remain idle:

From there I decided to walk back and peek in on our Outdoor Supply Hardware (OSH) store. They, at least, are moving right along: while there I watched two people putting together shelving in the outdoor, garden section of the store, and saw similar activity both inside the store itself and inside the little drive-through area across the parking lot. From what I could see the shelves were being filled with items to sell almost as quickly as they were being built: 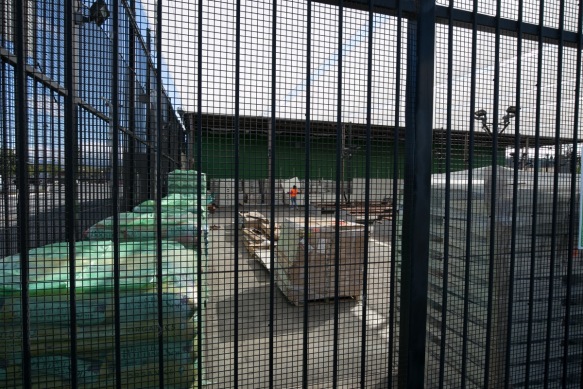 OSH should be opening soon, based on the level of activity I saw. While they aren’t open yet, they’ve already posted what will be their hours of operation: 7 a.m. to 9 p.m. Monday through Saturday, and 8 a.m. to 8 p.m. on Sundays. Although Hassett Hardware in Woodside Plaza will likely remain my main go-to for hardware, these guys will likely be a close second for me.

Other things that have happened while we’ve been sleeping, er, sheltering, include the move of Joby Aviation from Redwood City to San Carlos. Most of Joby Aviation (which is designing a four-passenger electric aircraft that can take off and land like a helicopter) is actually located in the Santa Cruz area, but as I wrote back in March 2018 (in I Want My Flying Car), they opened a small outpost in Redwood City in an old body and paint shop on Broadway near Chestnut Street. Some time ago I noticed that they had opened yet another location on Industrial Road in San Carlos, and this week I noticed that the signs have been removed from their Redwood City offices:

Farther along Broadway I also noticed that, sadly, our EBikes Etc. store seems to be gone: 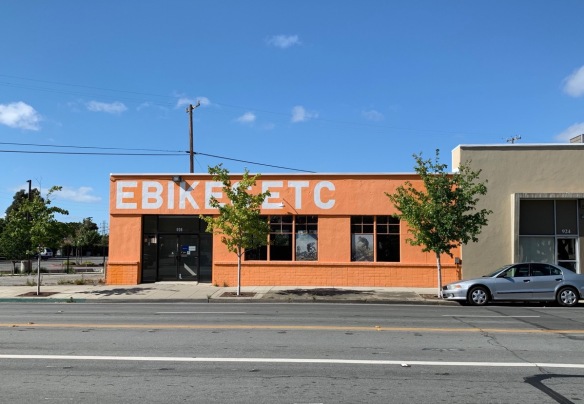 For the last several years this store had been exclusively (I believe) selling electrically powered bicycles. I can’t tell if the company as a whole has gone out of business — I don’t think that they have — but I’m saddened that they appear to have left Redwood City. From what I’ve read, if you are in the market you really want to buy an e-bike from a local store that can provide service. Fortunately, we have one or two more traditional bicycle retailers in Redwood City who sell e-bikes as well, including Chain Reaction Bicycles, so we still have options. Knowing absolutely nothing about how the e-bike business is going these days, I must say that I’m a bit surprised that EBikes Etc. closed, based on the fact that bike sales seem to be doing pretty well during our time of sheltering in place, and because I’m increasingly seeing people on e-bikes as I walk around the city.

It is nice and wide, and in many spots will be separated from the street by planting strips. They’ve used two colors of concrete, making for a sidewalk that is comfortably wide without looking like it. I’ve been watching this project for some time but this week is the first time I’ve been able to actually walk on the sidewalk itself. I can’t wait until the planting strips are filled and all of the overhead wires are removed (one of the main efforts of this project is to underground all of those wires). Middlefield Road is a great way to get to the vicinity of Costco, OSH, and Sigona’s Farmer’s Market, and this sidewalk will go a long way towards encouraging many people to leave their cars at home when taking a shopping trip.

In another part of town, I noticed that the Hallmark House apartment building (which is being rebuilt after a years-ago disastrous fire) had received a rather large load of lumber, signaling that the project is shifting from the demolition phase to a construction phase. And the folks behind the Magical Bridge Playground being built in Red Morton Park put out a video tour of the project so far. Note that if you choose to watch it, the audio is pretty uneven: it was shot with a smartphone, and Jill Asher, who is holding the phone, comes through loud and clear while the two women who she talks to during the tour are quite faint. Thus expect to turn up the volume and perhaps wear headphones. But if you are interested in this project at all, check out the video; it shows what a terrific playground Redwood City is getting, thanks to the Magical Bridge Foundation.

Lastly, before I end, I walked back home along Broadway through downtown Redwood City and noted that the restaurant that (cross your fingers) should one day soon be the latest Zareen’s location continues to make good progress: crews were working on the interior as I passed by:

And I although Milagros is no longer open for takeout or delivery, I noted that Quinto Sol (on Broadway across from Courthouse Square) is — and that they have takeout margaritas! They aren’t taking walk-up orders, but their menu is online and they accept orders over the phone. Delivery is available via the Caviar app. So if you need to satisfy your craving for some great Mexican food, don’t forget Quinto Sol…

While we’ve been sheltering, Redwood City has been fairly quiet — but not entirely. Especially now that things are starting to slowly open back up, I’m watching for, and seeing, signs of activity. While I’m saddened by the businesses that we seem to have lost (and I have no doubt that we’ll lose more before all this is over), I’m pleased at the number of restaurants and retailers that are still functioning as best they can during this difficult time.

7 thoughts on “While You Were Sheltering”