At the end of March the San Mateo County Health Officer revised Order No. c19-5b (don’t you love how they name these things?) to tighten up the rules around sheltering in place. While this order has a variety of impacts, including tightening the definition of “essential business activities,” most of us were probably already living within the confines of this new version. Thus, although I read through a summary, I wasn’t all that interested in the details — except for one. One part of the clarification set a limit on how far we are allowed to go when we are out walking, running, hiking, or cycling. Before the clarification I don’t believe that there was a specific distance limit; that the only limit was on the reasons for going outside. As it now stands, though, when we go out for exercise (“outdoor recreation activity”) the number one limitation is this (see section 13.a.iii.1):

When I first heard about this I was thinking how this would limit the walks I take, some of which run to as much as 12 miles. But then it occurred to me to actually read the order, and consider the precise wording of it. Whether or not it is what was intended, I feel comfortable in reading the above limitation as meaning that I can go anywhere with a five-mile straight-line distance from my home. That is, if I take a map of our area and draw a circle with a five-mile radius that is centered on my home, I should be able to walk or ride to any point within that circle. Naturally, I then did just that: I took a map of the area and figured out just where I could go while remaining within five miles of my home.

Because I live in the vicinity of Sequoia Hospital, I took as my origin the intersection of Alameda de las Pulgas and Whipple Avenue (an intersection that is easy to find on a map). I love to walk up into the hills, so I first checked to see whether I could still walk up to, say, Canãda College. As it turns out, from my house the college is just under 2.3 miles. How about the easternmost tip of the Friendly Acres neighborhood (across Highway 101 along Marsh Road)? That is only 3.9 miles. OK, surely Redwood Shores is too far, right? As it turns out, it isn’t. The farthest point in Redwood Shores is only 4.8 miles from my house (Shore Dogs Park is 4.5 miles away).

Indeed, all of Redwood City and all of Emerald Hills lie safely within my five-mile limit. So just how far can I go? Well, all of San Carlos, and even all of Belmont are within five miles. I could walk to Hillsdale Mall (4.7 miles). Heading the other way, the intersection of Alameda de las Pulgas and Sand Hill Road is within the limit, as is the point where El Camino Real crosses into Santa Clara County (that is, into Palo Alto). There is a tiny part of Menlo Park that lies beyond five miles, but the vast majority of that city is just fine. According to my calculations I can walk to any point within Atherton or North Fair Oaks while remaining within the legal limit. Woodside is a bit of a problem only in that it extends way up into the western hills: the town of Woodside is easily within range (the intersection of Woodside Road and Highway 280 is less than 3.2 miles from my house) but if I tried to follow Highway 84 up into the hills I’d soon hit the limit.

Even if I could walk in a straight line, I would be allowed to walk five miles out and five miles back, making for a ten mile walk in total. And of course I never do walk in such straight lines; there is usually at least some degree of zig-zagging, and usually quite a bit. Thus, I could walk for quite a bit more than ten miles while staying quite legal. If I were cycling, though, even a roundabout route could easily cross over the five-mile limit. Thus, for all you cyclists out there, you might want to check a map when planning your next ride.

Given our gloomy weather over the weekend, and the glorious California sunshine that greeted us on Tuesday, I decided to put some of my thinking into practice and take a walk up to the Easter Cross. I hadn’t connected my destination to the fact that this was Holy Week before I set out, but seeing that huge hilltop cross up (relatively) close served as a rather large reminder. But the cross itself, although a destination, wasn’t actually the reason I went up into the hills. No, I was really up there to take in the views. Views like this one: 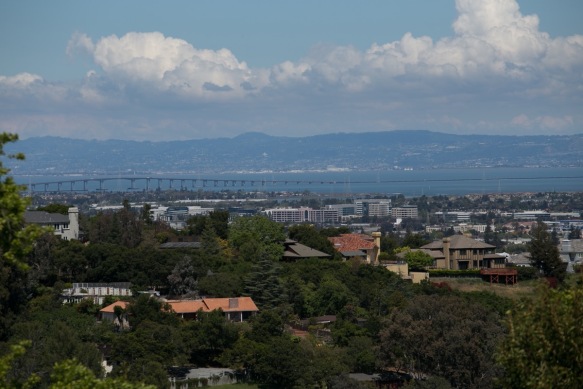 That’s the San Mateo Bridge, of course, along with parts of San Carlos, Belmont and Foster City. I took this particular picture early on in my walk, along Lakeview Way.

Because I had planned on taking in the views, I brought my long lens (I take my walks with a digital SLR camera, and I bring the lens or lenses I think will be appropriate). That allowed me to get a nice view of Stanford University, which I took while standing just below the cross: 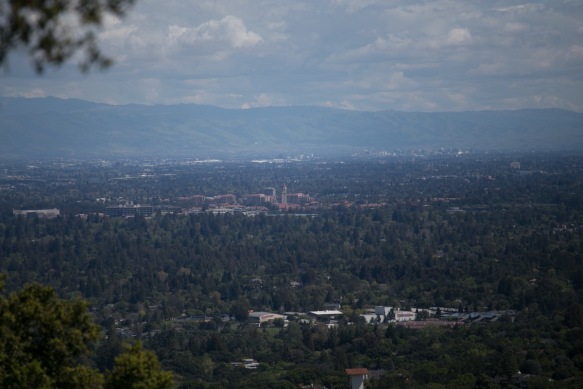 You may want to zoom in on this one (click it for a version you can zoom in on). Note Woodside High in the picture’s foreground.

From that same spot I also managed to get a nice shot of Moffett Field and the Shoreline Amphitheater: 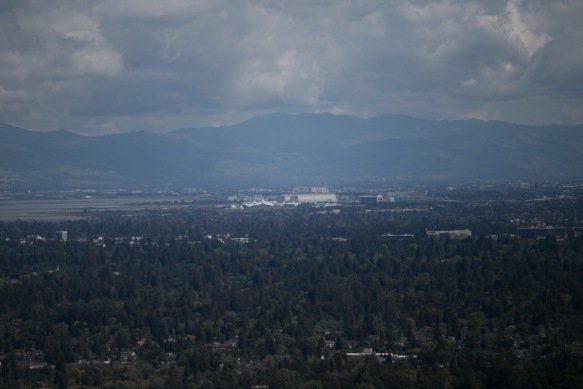 As you can see, the clouds were rolling in as I was taking these two pictures; I’ll have to go back on an even nicer day.

The spot where I took the previous two pictures was on California Way, with the Easter Cross above me and the Easter Bowl below me. As I stood there, looking down into the Easter Bowl, three deer emerged from the bushes and began grazing: 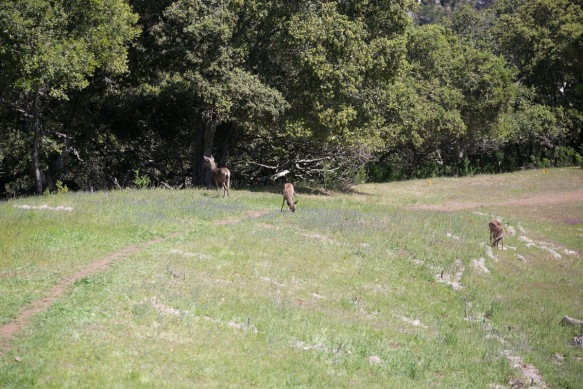 I always enjoy encountering a bit of wildlife on my walks, and Emerald Hills rarely disappoints.

Although my primary aim was to take in the views, I always manage to find things along the way when I’m out walking, and this trip was no different. For instance, early on in my walk I passed the small shopping center in Emerald Hills, where Bonfare Market and Sancho’s are located. I was captivated by the simple way that Emerald Hills Cafe and Roastery set out the safety limits for its customers: 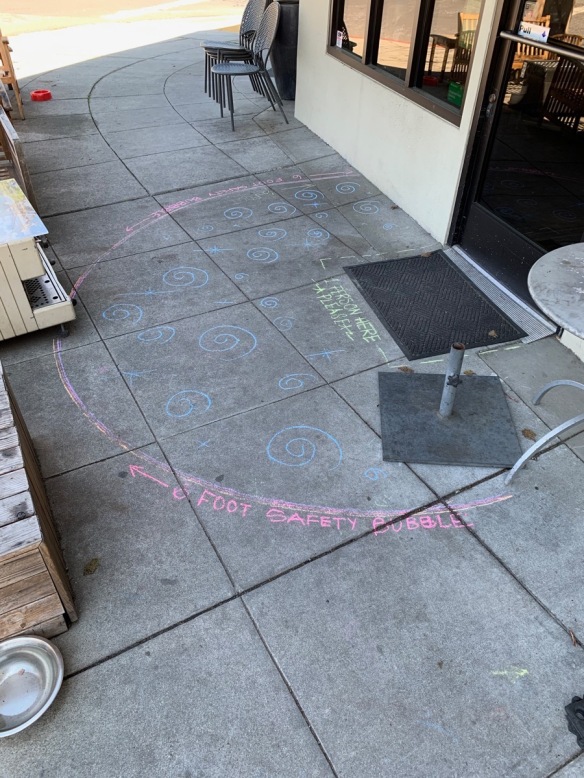 With no more than a couple of pieces of colored chalk, they clearly marked where one customer at a time should stand (on the mat) and the “6 foot safety bubble” outside which everyone else should remain.

Chalk seems to be making a comeback during our current pandemic. Further up in the hills I was delighted to run across this: 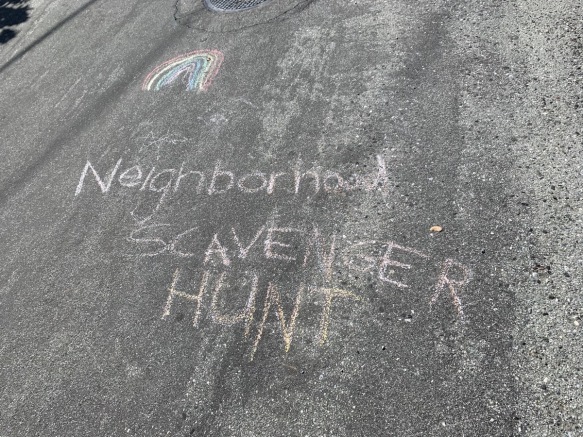 I presume that the above was chalked on the street by an enterprising parent looking for ways to provide outdoor activities for the children in the neighborhood. I noted two of the stops on the scavenger hunt, by the way. Here is one of them: 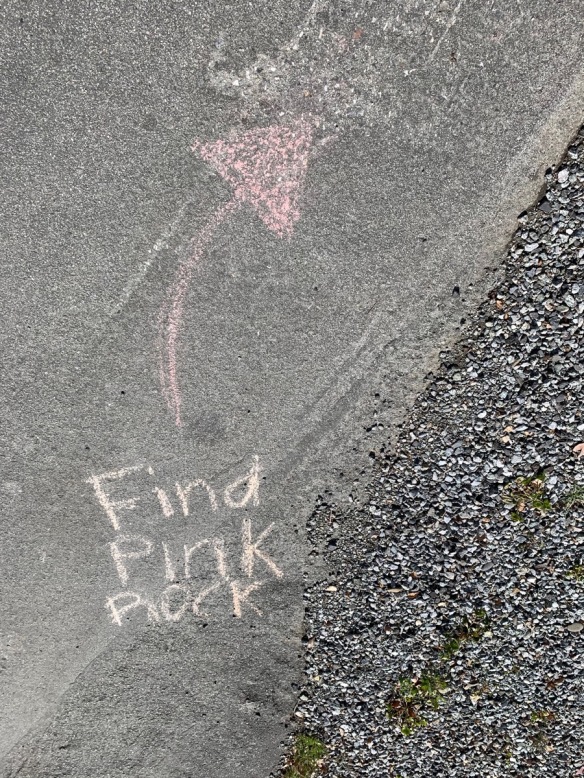 There was nobody around to ask, but I presume that the kids were to look through the gravel on the right and find a (or the) pink rock. Then they were to follow the arrow to the next challenge chalked on the asphalt. Very clever…

I wasn’t explicitly looking for them, but while on my walk I saw a couple of bears. Not real bears, of course, but the stuffed kind. Going on “bear hunts” is apparently a thing to do these days: people put stuffed bears (and other stuffed animals) in their windows or in other prominent places so that kids can “hunt” for them when they are out walking with their families. For me it started with this guy, who was truly hard to miss: 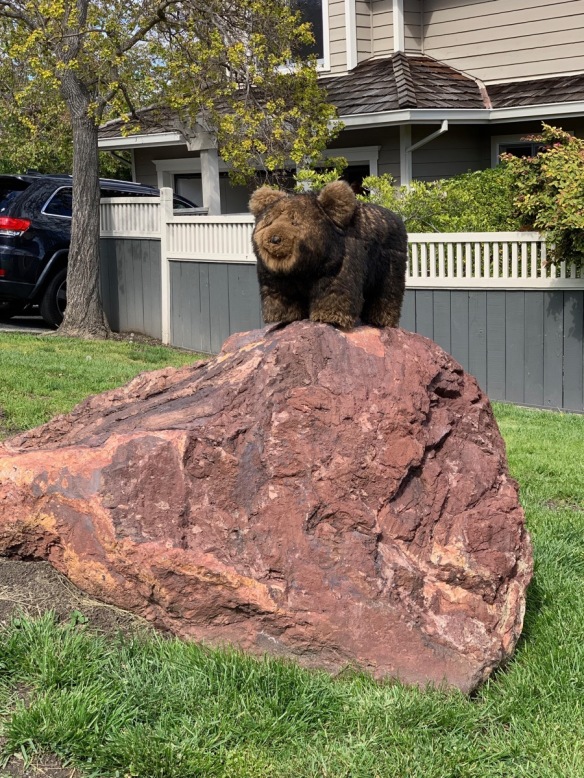 Later on I saw this one (which is a rabbit, not a bear): 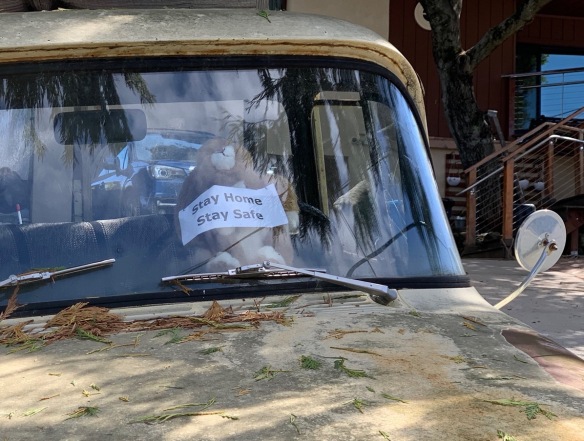 Finally, towards the very end of my walk, I saw this little guy waving from a window: 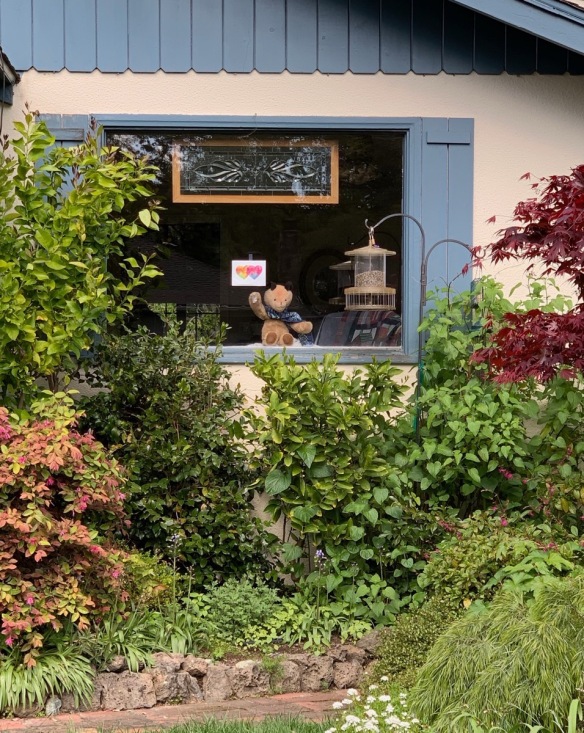 This is a terrific idea. If you have a stuffed animal just sitting around, consider putting it in a window for the neighborhood kids to discover.

On a related note, high up in the hills close to the upper entrance to Edgewood Park I passed these guys: 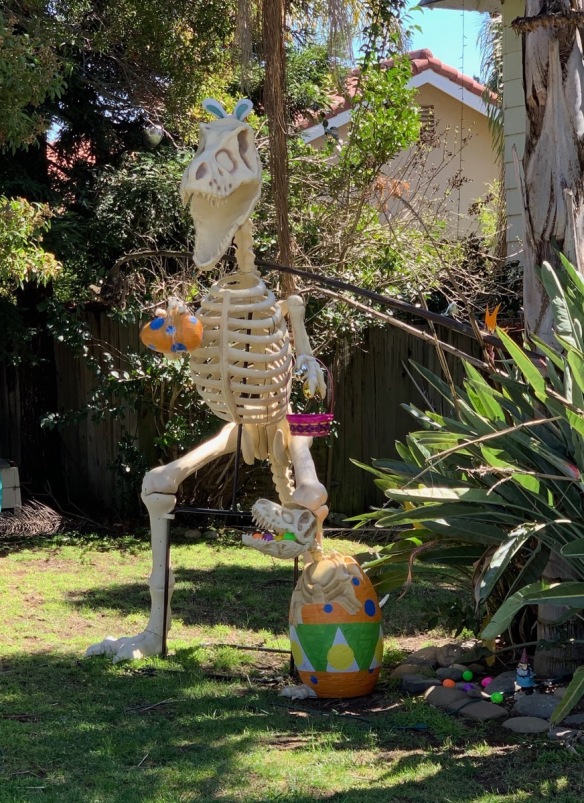 Dug the Dinosaur — the large metal dinosaur that used to live in a front yard off Jefferson Avenue near Alameda de las Pulgas and who was dressed in interesting ways on various holidays — has been gone for some time now (I believe that his owners moved) so perhaps this dinosaur skeleton will take his place (this one is way up in the hills, though, in a much less prominent spot). I don’t know if he’s just out for the Easter holiday — I love the baby dinosaur skeleton hatching from the egg — or whether he’s out all year round. I’ll try and make it a point to go back in a few weeks and see if he is still there, sans Easter accoutrements.

That about does it for my walk this week. I can highly recommend walking up through Emerald Hills, both for the views and for the great exercise it gives you. Be aware that there are very few sidewalks up there, though, so plan to be walking along the side of the street for much of the time. Fortunately, the traffic up there is pretty quiet, especially during the middle of the day. Also, if you aren’t well acquainted with Emerald Hills, be sure and bring a map of some kind (a smartphone with a map app does nicely): the streets up there are rather circuitous, and it is easy to get lost.

For the record, I walked 9.1 miles that day, and I took a rather roundabout route. According to Apple Maps, the shortest walking route from my house to just below the cross is 3.4 miles (as the crow flies, that spot is only 1.9 miles from my house). Thus, taking this shortest route would have made my total walk just 6.8 miles long. But as you can see, if I had followed that route I would have missed out on a great many things. Including having been able to take the following picture, which is of downtown Redwood City and beyond as viewed from the street by Handley Rock Park (which is closed for now, by the way): 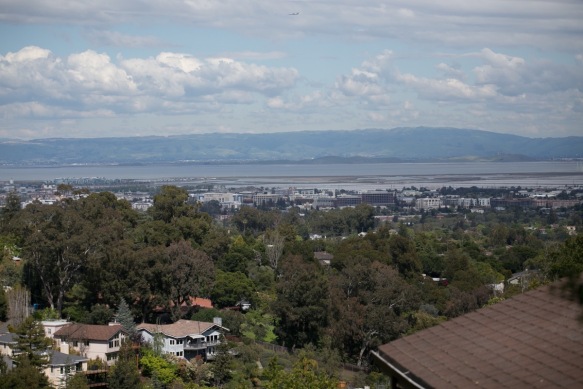 You know what? At least for me, a limit of five miles doesn’t really seem to be a limit at all…