This is my 14th post exploring one of Redwood City’s neighborhoods. (I recently put together a dedicated page with links to the neighborhood posts I’ve written so far; to see those, go here.) Years ago Redwood City staff, in coordination with the City Council, divided the city up into 17 distinct neighborhoods, each with its own unique aspects. Each has a neighborhood association of some form or another, and many have regular meetings that neighborhood residents are encouraged to attend. Others meet only when an issue of concern to that neighborhood’s residents arises. The Edgewood Park neighborhood is one of those that meets on an as-needed basis, and meeting locations are determined once association leaders decide that a meeting is warranted. 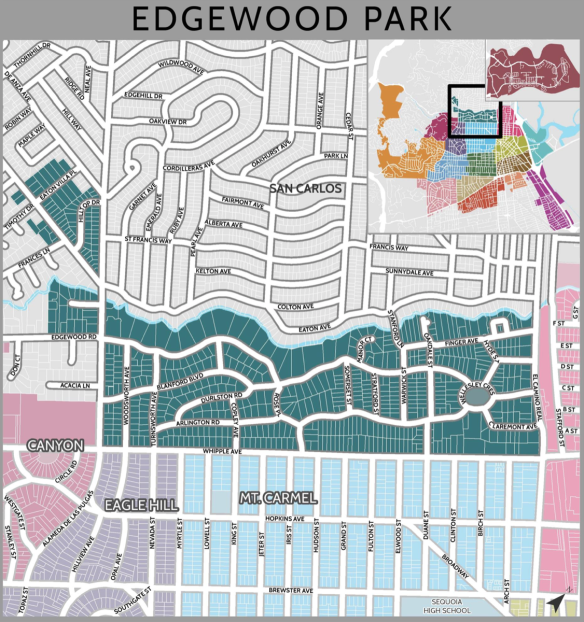 In this map, the Edgewood Park neighborhood is shaded in a dark blue-green. It borders the Canyon, Eagle Hill, Mt. Carmel, and Centennial neighborhoods. Perhaps more importantly, the edge of this neighborhood, which is defined by Cordilleras Creek, also forms much of Redwood City’s border with our neighbor to the north, the City of San Carlos.

Edgewood Park is one of Redwood City’s smaller neighborhoods, but at just over 200 acres in size it is still substantial. Most people probably think of Edgewood Park as the “upscale” part of town, and for the most part it is. Some of Redwood City’s largest and nicest homes are located within the Edgewood Park neighborhood. Certainly some of Redwood City’s largest residential parcels are located here: the largest is roughly 1.5 acres in size, and there are a number of parcels here that are one acre or larger. But if you look carefully at the above map, and pay particular attention to the lines delineating the neighborhood’s various parcels, you’ll see that the larger parcels are for the most part only on the north side of Edgewood Road, and are only between Alameda de las Pulgas to the west and Manor Court to the east. Drive or walk along this part of Edgewood Road and you’ll see that the parcels on the south side of the street, although still substantial, are nowhere near as large as the ones on the north side of the street.

Regardless of which side of the street you are on, however, there are plenty of nice houses in this neighborhood. Unlike some neighborhoods, however, the larger houses here are a bit tricky to photograph: all of that land allows the houses to be located well away from the street, and surrounded by a substantial amount of landscaping. Which is understandable: many homeowners want to do what they can to maintain their privacy. So, for instance, the house at the corner of Edgewood Road and Alameda de las Pulgas is surprisingly hard to get a good picture of. This is about the best I could do: 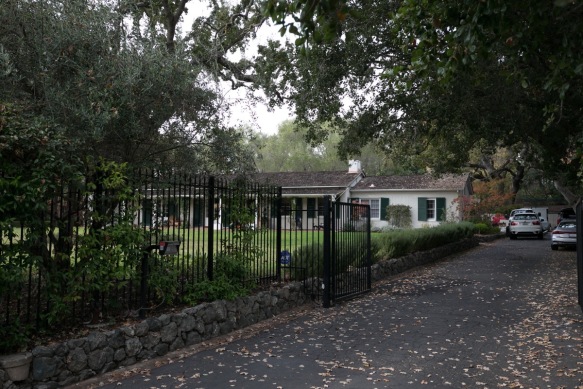 This house sits on the northern side of the street, meaning that the 1.03-acre parcel upon which it sits extends all the way back to Cordilleras Creek. Contrast this house with these that are across the street and just a bit to the east:

These houses look lot like what you’d find in other Redwood City neighborhoods, such as the neighboring Mt. Carmel.

In addition to having some of the city’s largest houses, the Edgewood Park neighborhood has some of the city’s oldest. In fact, it has one house that just might be the oldest house still standing in Redwood City: the house at 90 Finger Avenue. Records are a bit sketchy, and there is a house or two in the Stambaugh-Heller neighborhood that might be older, but this one certainly is up there. According to Redwood City’s Inventory of Historic Resources, the house was “built by Otto, August, and Theodore Finger in 1855.” Unfortunately, it is set well back from the road, and the front part of the property is heavily landscaped, making photography of the house pretty much impossible without setting foot on the property. That didn’t stop me from trying, however, but this is the best I could do:

Speaking of Finger Avenue, not too long ago a developer was able to obtain three properties on the creek side of Finger Avenue, properties that were redivided into eight parcels and developed into something dubbed “The Grove.” The development included a new horseshoe-shaped road, Liberty Hall Lane, that provides access to each of the multimillion-dollar new homes. Interestingly, the developer was unable to obtain one of the older properties that ended up in the middle of the horseshoe. Today the beautiful old house at 54 Finger Avenue finds itself flanked on one side by one of the new development’s homes, and on the other by Liberty Hall Lane itself:

Because houses are a large part of what this neighborhood is about, let me show you one or two more: 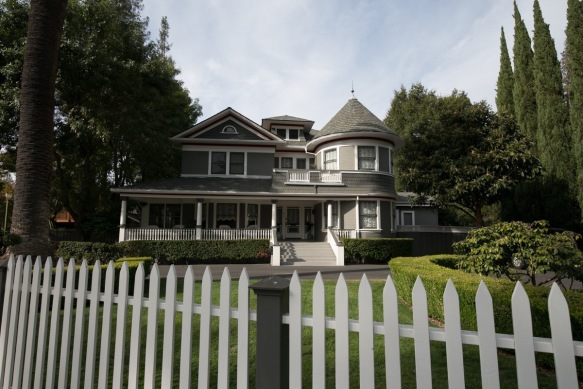 I’m a big fan of the above house (who wouldn’t be?). It is located on Edgewood Road, and fronts onto Wellesley Crescent, the neighborhood’s one park.

For contrast, when walking the neighborhood I stumbled across “Edgewood Manor,” a place that is not nearly as grand as its name:

I definitely need to do some more research on this house, which is located at 516 Edgewood Road. It’s not particularly large. What draws the attention, though, is the fact that it is overgrown and appears to be unoccupied. Given the name, and some neat old gates, this house bears investigating. It doesn’t seem to be listed in Redwood City’s Inventory of Historic Resources, so perhaps it isn’t as old as it looks… 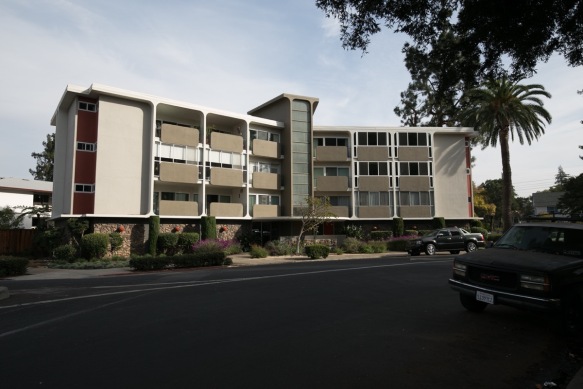 Not all of the apartment buildings are so large, however. The small section of Edgewood Road between El Camino Real and Wellesley Crescent, for instance, is where you’ll find these two buildings: 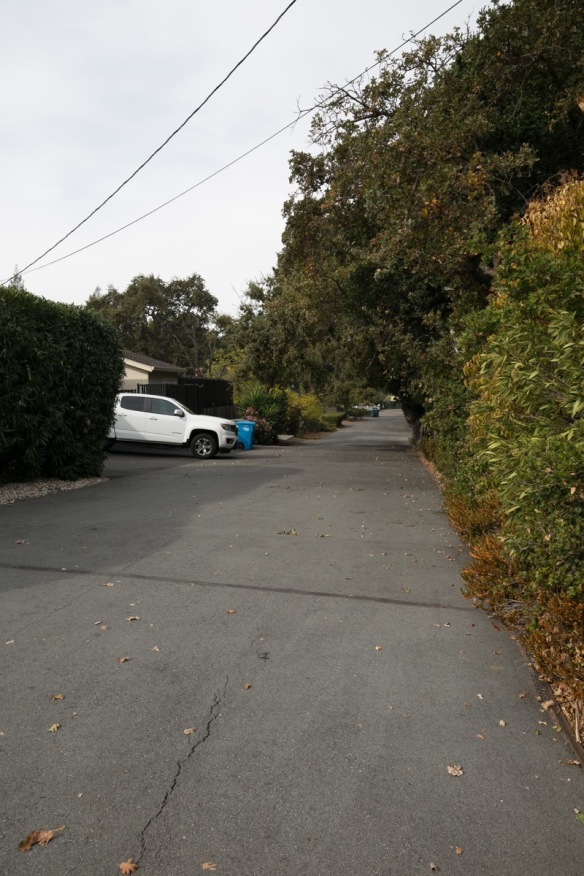 This private drive is apparently called Lamshin Lane. It extends far enough back that it could almost connect up with Maxwell Lane — although that would require that one of the homeowners at the end of that street grant right-of-way across their property, which is probably neither feasible nor desirable.

The other “appendage” is the oddly shaped one towards the upper left corner of the map. The rest of the Edgewood Park neighborhood is essentially flat, whereas this one portion is draped across a small hill. Walk along the aptly named “Hilltop Drive” and you’ll see what I mean. But I find the shape and location of this particular part of Redwood City to be particularly intriguing: it is completely surrounded by San Carlos, and if it is physically connected at all to Redwood City it is only through a very narrow strip along Alameda de las Pulgas. There surely must be an interesting reason as to why some of the homes in this area are in Redwood City, and some are in San Carlos, but I have yet to learn what that reason is. Regardless, the homes in both of these two appendages are a mix of old and new, big and little. Here is one that appears to be both large and somewhat old, at 90 Alameda de las Pulgas:

Speaking of streets, I should highlight Warwick Street, which is the only way across Cordilleras Creek in this neighborhood between El Camino Real and Alameda de las Pulgas. Warwick Street changes its name at the city border, becoming Stanford Lane on the San Carlos side. The dividing line, of course, is Cordilleras Creek. And speaking of which, here is a photo of that creek from El Camino Real:

Within this neighborhood, unless you can talk your way into someone’s backyard, there are only three places to see the creek. You can easily see it from El Camino Real, and you can also easily see it from either side of Warwick Street. If you work a bit you can also see it from Alameda de las Pulgas, but especially on the east side of the street getting a glimpse takes some doing thanks to the vegetation that has grown up along the street there.

I should say something about the neighborhood’s only park, Wellesley Crescent Park. It is about 3/4-acre in size, and has no playground, no restrooms, and no BBQs. What it does have is grass, a number of very mature trees, some benches, and some trash cans. It’s a great place to enjoy lunch or a good book, and I’m sure kids in the neighboring homes do run around and play there somewhat. Plus, people undoubtedly walk their dogs there. But it isn’t a destination park: if you are looking for a place to spend some time with your family, this one shouldn’t be on the top of your list. Although it does have a cool pair of lions guarding the entrance:

Certainly, when people think of the Edgewood Park neighborhood they don’t think of retail, but the neighborhood actually contains a surprising amount of it. Just about all of the neighborhood’s businesses are arrayed along El Camino Real (there is a small office or two on Edgewood Road, just in from El Camino Real). Retail here includes everything from the small strip center at the corner of El Camino Real and Whipple Avenue (where you’ll find FedEx Office, Starbucks, T-Mobile, and Hikari Sushi, among others), the small cluster of retail best known for its 7-11 store next door, and everything up to the single-story insurance office on the north side of Finger Avenue: 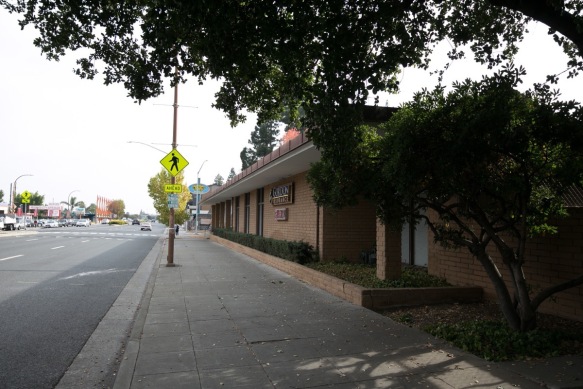 The above picture was taken looking south along El Camino Real, while standing on the sidewalk above Cordilleras Creek.

Between this office and the Whipple Avenue intersection are a couple of other notable businesses, including the now-empty Mountain Mike’s restaurant (soon to become a twelve-unit townhouse-style condominium development to go with the recently completed development next door), a KFC restaurant, Stacks restaurant, the Peninsula Feed Store, and a Best Western hotel:

That’s a not-insignificant amount of retail, all of which is within the Edgewood Park neighborhood, a neighborhood that most people probably think has none at all.

Even I, who have spent a fair amount of time exploring the neighborhood on foot, still have a hard time thinking about Edgewood Park as a neighborhood that has any retail at all. The neighborhood’s large homes make such an impression that they dwarf the majority of the neighborhood, which overall consists of many great homes and apartments. You have to force yourself to realize that this neighborhood is in fact a lot like, say, Mt. Carmel, just with a couple of dozen very large homes added in. Beyond those large homes, what makes this neighborhood somewhat unique is what it lacks: any real amenities (other than the rather pedestrian Wellesley Crescent Park). It has no schools, no churches, and no hospitals (Sequoia Hospital is located in the Canyon neighborhood). But Edgewood Park is a terrific place to live, with relatively quiet streets, mature trees, and a number of homes that touch directly upon Cordilleras Creek.