Like almost everything in the world these days, the medical field is changing the way that it does things. Hospitals are being used less frequently for inpatient procedures: these are now being performed more commonly in outpatient surgery centers, ambulatory care centers, geriatric care centers, and the like. Increasingly, medical office buildings (MOBs) are being built close to hospitals, medical centers, or nursing homes. MOBs are filled with doctors and other health-care related tenants, and most have exam rooms in addition to the needed office spaces.

Here in Redwood City, two of our largest medical centers are either building or are planning to build MOBs. In February of last year I wrote about Kaiser Permanente’s planned MOB; see my post Working for the MOB for all the gory details. Back then construction fencing had been put up around the site and much of the necessary demolition had been done, but construction on the four-story building, above an enormous three-story underground parking garage, had yet to begin. Now, almost two years later, the building is being buttoned up, with the exterior seeming to be weeks away from being completed. Here is a rendering that Kaiser supplied with their project application:

Compare that with a recent picture from roughly the same spot, which is the corner of Maple and Marshall streets:

This project is really humming along. In fact, I have to wonder if it is running ahead of schedule. The plans that were included when the project was submitted to the city included an estimate that this building would be complete in February 2021. That is about 14 months from now, and at least from the outside there is nowhere near that amount of work yet to be done. Of course, although through the windows I was able to see some interior walls and wall framing, I’m sure that a great deal of work has yet to be done in there. Because this building serves such a specialized purpose — a number of specialized purposes, actually — fitting out the interior is undoubtedly more complex than fitting out a typical office building. There will likely be a great deal of medical equipment that will need to be installed, for instance, along with a great deal of communication and safety gear. Fourteen months still seems a long time, though.

Incidentally, the completion of this building will mark the end of “Phase 1” of Kaiser’s project. Immediately afterwards, “Phase 2” begins. This will be a big one: the old hospital out on Veterans Boulevard (which has been serving as a medical office building ever since the new hospital was built) and the small “Oak MOB” (on Maple Street) will be torn down, and a new entryway and surface parking lot will be constructed in their place. All of this will take time: that portion of the project isn’t scheduled to be complete until February of 2023.

Not to be outdone, it seems, back in July Stanford Health Care submitted a planning application for a MOB of their own, to be built next to their existing medical buildings between Broadway and Highway 101, several blocks south of Woodside Road. I wrote a bit about this project when it was first proposed, in my post All in a Row. Back then, the buildings that are to be replaced by this MOB building (and its associated parking structure) were still in use: they were the offices of Stanford University Press and Stanford University Libraries. I paid another visit this week, however, and those two buildings now appear to be empty. All of the signage has been removed from the buildings, and both have hand-made signs taped to their glass entry doors indicating that people needing access to the building must call Stanford Security:

Stanford hopes to replace the somewhat forgettable office building shown in the above picture, along with a smaller building behind it, with this rather impressive structure:

It looks to be a whopper, and indeed Stanford intends for this building to be a signature building within the campus. However, in actual fact this MOB, although being nine stories tall, will only be about 15 percent larger than Kaiser Permanente’s in terms of square footage. Part of the reason that this building looks so large, while having so relatively little space inside, is because a good chunk of the first three levels of the building will contain parking (there will also be one level of underground parking). Behind the MOB, up against Highway 101, Stanford also plans to build a stand-alone parking garage that will be somewhat smaller than, but look a lot like, the one they recently completed behind their existing medical buildings. Thus, altogether the campus will have more than the required amount of parking when all is said and done.

Stanford is placing particular emphasis on the landscaping that will separate this new building from the existing medical buildings next door. Warrington Drive, which currently cuts through Stanford University’s non-medical, non-academic campus on the other side of Broadway, would be extended into the medical campus and would terminate with a landscaped loop, some of which can be seen in the above rendering. This would make for a much more formal entrance into the medical side of Stanford’s property, very much unlike what is there today: a simple driveway into a surface parking lot alongside and behind the two-story office building that will be replaced by the new medical office building.

In the above picture, that building on the left is the one to be replaced by the new MOB. The driveway immediately next to it is what would become the brief extension to Warrington Avenue, and would thus be the main entrance to Stanford Health Care’s campus. The more prominent driveway further along to the right is the one that most clients of the existing Stanford Health Care campus in Redwood City use today; that driveway would be eliminated as part of this new project.

Stanford Health Care’s most recent plans include a terrific rendering that shows what the project and a good chunk of its surroundings would look like from the air. This not only shows the landscaped entry and loop, but the new building and its parking structure (labeled PS-E), some of the existing medical buildings and their parking structure (along the right edge of the rendering) and Stanford University’s campus, along the bottom and left edges. I’ve taken the liberty of including that rendering here; note that you can find the original on sheet A.1-000 of their plans from September 18, 2019.

I’ll write more about Stanford Health Care’s new Medical Office Building in a future post, if and when it gets underway. For now, though, allow me to switch to the other side of Broadway, and drop the medical talk. 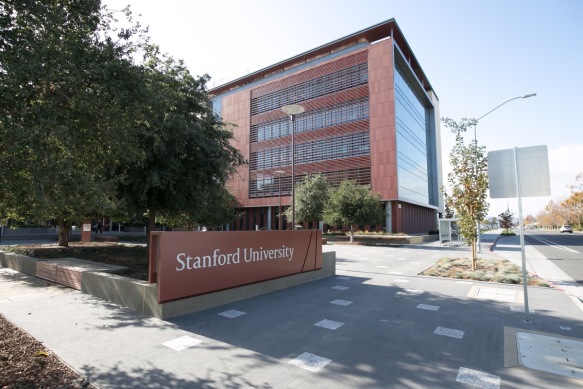 I’ve written a great deal about Stanford University’s non-medical campus in Redwood City. For the moment the campus is complete, although Stanford has plans for additional phases that would add more buildings to their Redwood City campus; assuming all goes well, we’ll see those at some time in the future. I’ve also written about how delightful it is to walk through the campus, but until very recently I had not able to enjoy the largest bit of open space on the new campus: finishing that up was left until last. This week I again walked through the campus, and was able to get the full effect of the campus’s public spaces. I do have to say, for all the objections some people have against Stanford’s Redwood City campus, it is hard to find fault with their grounds. This campus is a really peaceful place through which to walk, and now Stanford has added a large open lawn where people can either relax or enjoy active play:

Frisbee anyone? For those of you who love playing games of that sort with their four-legged friends, I have both good and bad news. The good is that dogs are indeed allowed on campus. The bad? They must be leashed at all times, and the leash can be no more than six feet in length. Thus, Frisbee seems to be out, at least with your dog. But feel free to play here with your kids. Stanford has clearly posted signs indicating that although we must be aware that this is private property, members of the public are welcome to enjoy it as long as they obey certain rules, such as the one pertaining to dogs. Other rules bar commercial or wedding photography — or commercial activities of any kind, in fact — and explicitly ban all drones and other remote-controlled flying devices. Finally, no smoking of any kind is allowed: no cigarettes, no vaping.

As long as you can live with those few restrictions, I can attest to this being a great place to sit and perhaps enjoy one’s lunch. There are some comfortable wooden benches around the paved loop that circumscribes the largest lawn area, plus bins for trash and recycling. The path itself leads to the main one that meanders through the entire campus, and is a great place for a casual stroll (or perhaps a run, but I don’t do that). While I was there I saw quite a few people out enjoying the paths, some getting exercise and some in close consultation with a walking partner or two.

The Stanford Campus’s “publicly accessible private open space area” touches Bay Road just up from Second Avenue, and is wide open there: there are no fences or gates barring access. The open space also connects to the neighboring Andrew Spinas Park: Stanford has extended their path to the fence dividing their campus from the park, and have opened a section of that fence to enable people to pass directly from the park into their property, and vice-versa. Although Redwood City has not yet extended the pathway within the park to this gap in the fence, they’re clearly working on it. And in any case, the park surface here is bark-covered dirt, and is easily navigable at the moment, at least on foot.

Here is one final view of Stanford’s open space area, this time looking from up against the buildings back towards Bay Road (where the tower is) and Andrew Spinas Park (left half of the image, where the farthest large trees are):

Can you tell that I really like this place? I have to think that the people who live in the neighboring areas — both those folks in Redwood City’s Friendly Acres neighborhood as well as the number of people living in the adjacent portion of North Fair Oaks — are going to get a lot of use out of this new publicly accessible private park.

Finally, let me throw in that the campus’s childcare center, which shares the block with the open space area, is now complete as well. Stanford did a really beautiful job here:

You’ll find it on Bay Road, close to the campus’s main parking garage.