I’ve been attending or watching a lot of meetings lately, all of which have been about some aspect of housing in Redwood City’s residential neighborhoods. Perhaps the most interesting was Monday’s City Council meeting at which they considered the Planning Commission’s recommendation on floor-area ratios, or FARs.

Our city leaders are working on ways to maintain character within our residential neighborhoods. Long term they hope to put in place design guidelines for new construction and remodels in our largely single-family areas, but the development of those guidelines is just getting off the ground (on Wednesday the Planning Commission held its first meeting to define the parameters of the issue) and is likely to take as long as two years. In the interim, the city has been looking to put the brakes on some of the out-of-scale projects that we’ve been seeing crop up, particularly in the Mount Carmel, Eagle Hill, and Woodside Plaza neighborhoods. Houses like this one, being built at 1817 Hopkins Avenue:

This is a completely new 3,062 square foot house that replaced one that was 1,488 square feet in size. As you can see, not only does it dwarf the two single-story houses on either side of it, style-wise it looks absolutely nothing like its neighbors. While there are a number of two-story homes on Hopkins Avenue (indeed, as I took this shot I was standing in front of a very large one on a double lot), most of those are somewhat proportionate to the properties on which they stand. As well, their styles tend to better blend in with the remainder of the neighborhood.

The City Council meeting was long, but fascinating. There was a great deal of public comment on the topic, much of which appeared to be somewhat orchestrated by a few passionate individuals. Of the 41 comments that I noted, 24 of them were in favor of the Planning Commission’s proposal, 11 were in opposition to it, and six didn’t take a firm stand either way (one was a representative from TJ Homes, a luxury home developer who currently has 13 projects in the works in Redwood City; because of his rather obvious bias I chose not to count him either for or against, even though he was clearly against the proposal). Although the Council was clearly interested in taking some form of action that night, to my mind they rather quickly dismissed the Planning Commission’s recommendation, which was for a “hard cap” that limited the total floor area of the home (not counting decks, porches, and balconies, and not counting detached structures like garages or ADUs), for both new construction and remodels, to either 2,500 square feet or 40% of the lot size, whichever is greater. Instead, the City Council ultimately voted for a “soft cap” that, rather than establish a firm line beyond which single-family home development cannot cross, draws a line and triggers Planning Commission review of any project that crosses that line (with exceptions; see the actual policy) — adding a degree of flexibility as to which projects might be approved. The line that the City Council ultimately drew was at 3,000 square feet or 45% of the lot size, whichever is greater. Projects that do not cross this line will continue to be reviewed by the Zoning Administrator.

For reference, the above project actually would not have crossed either of these thresholds set by the hard cap or the soft cap: this house sits on a rather large lot, one that is 8,255 square feet in size. Forty-five percent of 8,255 is 3,715. Because this is more than the 3,000 square-foot “floor” (put in place to allow houses of a reasonable size to be built on even small lots), the house on this property could have been as large as 3,715 square feet. Since the house in the picture above is only 3,062 square feet in size, it would not have gone to the Planning Commission for review. Instead, it would have done what it in fact did do: it would have been reviewed by the Zoning Administrator.

Although the above house would have made it under the line, there are a number of currently proposed projects, all of which are for new houses to replace existing ones, that won’t. In Monday’s City Council meeting staffers showed a list of 17 current applications, 12 of which exceed the new soft cap and thus would now need to go before the Planning Commission for review. I’m certainly glad that I’m not on the Planning Commission! They just got a whole pile of work dropped on them.

Located at the corner of Main and Marshall streets, this new quick restaurant is no “cuppa coffee.” They serve coffee, of course — single-estate, Arabica coffee — but they also have a very extensive food and drink menu. Currently their drink list is all non-alcoholic, but shortly they hope to be serving beer and wine. While I cannot judge a place by one visit alone, I did have a chance to sample one of the many items on their lengthy list of breakfast items — their breakfast crepe — and it was terrific. It was a buckwheat flour crepe filled with scrambled eggs, mushrooms, and gouda cheese, topped with avocado. I paired that with their “deluxious” hot chocolate, which was very rich and delicious. My wife, who accompanied me, had a latté, which she certainly enjoyed.

Coupa Café has done a great job with the interior decor, filling it with individual tables, long communal tables, and even a couple of couches. And for those of us who like dining alfresco, there are outside tables as well. I dropped in while on one of my afternoon walks, and saw a number of people on laptops; there are ample outlets and (apparently; I neglected to test it) Wi-Fi, so for those of you who like to work remotely, do check this place out.

In addition to the menu, Coupa Café has a number of “grab and go” items in a glass case, so if you only have a short time for lunch, you can pick something up and take it out with you.

While I suspect that Redwood City doesn’t need more coffee places — we certainly have a lot of them already! — Coupa Café is far more than just a place for coffee. Do check them out! They’re a bit off the beaten path, but only about a block away from the intersection of Broadway and Main Street, so if you are downtown be sure and walk on over. If you are driving, I’ll note that the Marshall Street garage — which has a 90-minute grace period, so most people can park, enjoy lunch, and then leave without having to pay for parking — is only a half-block away.

The Hopkins Avenue Traffic Calming (Pilot) Project is well underway. After reworking the intersection of Hopkins Avenue and Alameda de las Pulgas and then re-striping Hopkins Avenue, workers have been making their way down towards El Camino Real, installing rubber bumpers that, once the pilot has proven out, are to be replaced by concrete. The workers first installed the bumpers around the proposed center-lane islands, and included a number of plastic posts to increase their visibility:

Then, they began installing more bumpers along the street corners where the plans call for curb extensions and bulb-outs: 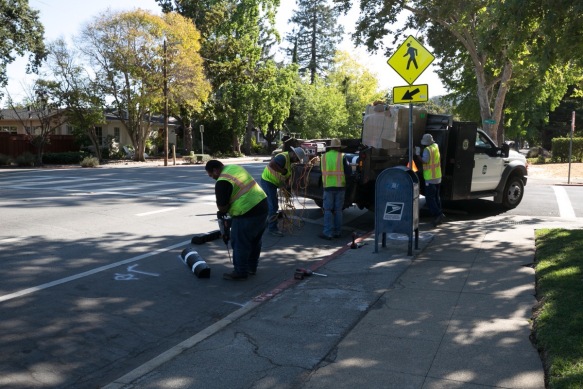 These bumpers are simply bolted to the street (note the guy in the above picture with the very long drill), so that the design can be tweaked to fine-tune its effects. After the bumpers are in place, expect the installation of raised crosswalks at both King and Fulton streets and pedestrian-activated beacons at both King and Lowell streets (the two corners of Stafford Park). I’m guessing that the yellow sign in the above picture, which directs motorists’ attention to the crosswalk, will be replaced by one of those flashing crosswalk beacons. Everything should be done by the end of September.

Two months after the work is complete, the city will collect data and survey the community in an effort to determine how well the pilot is working. So far, though, it appears that vehicles are adjusting to the changes at Alameda de las Pulgas rather well. As for the temporary islands and bulb-outs, those are too new to form an opinion on. I can’t wait for the pedestrian-activated beacons, though; those, plus the two raised crosswalks, should make a real difference in vehicle speeds along this important Redwood City street.