The following map shows both the extent of the Roosevelt neighborhood and its surroundings. The inset shows the neighborhood’s location relative to the whole of Redwood City. Click the map for a version you can zoom in on. 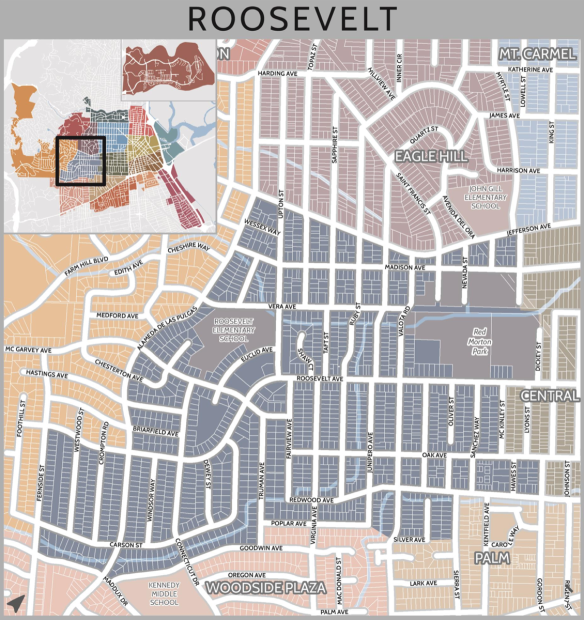 The neighborhood’s boundaries are fairly irregular. To the north, Jefferson Avenue forms a clean border. To the west, Alameda de las Pulgas forms another border, one that would also be sharp and clean except for the three blocks to the west of Alameda that are assigned to this neighborhood. Goodwin Avenue forms about half of the southern border, but then that border zig-zags around somewhat. Look closely, and you can see that in two places the southern border doesn’t follow a street, meaning that a few Roosevelt neighborhood residents have next-door neighbors who are represented by a different neighborhood associations. Finally, the eastern border jogs around so much that I’m not going to even bother trying to describe it in words. Here, a picture really is worth a thousand words! 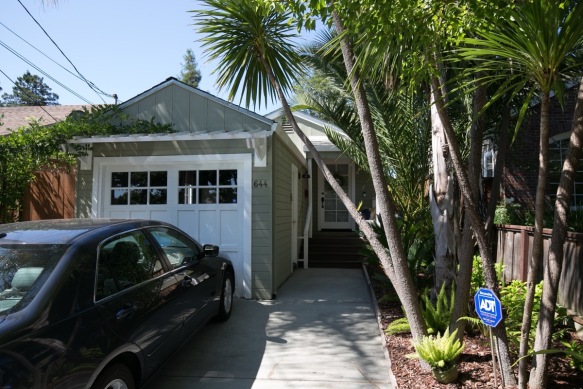 The living space of this particular house is entirely behind the garage; that roof you see against the left edge of the picture is a neighboring house. In case you are curious (I certainly was), this house has two bedrooms and two bathrooms, and is just under 1,000 square feet in size. It was apparently built in 1940, but clearly it has been updated since then.

That house is an anomaly, though; its size is by no means typical of the neighborhood. Most of the houses in the Roosevelt neighborhood appear to be somewhat larger. For instance, here is one that is located in those three blocks west of Alameda de las Pulgas: 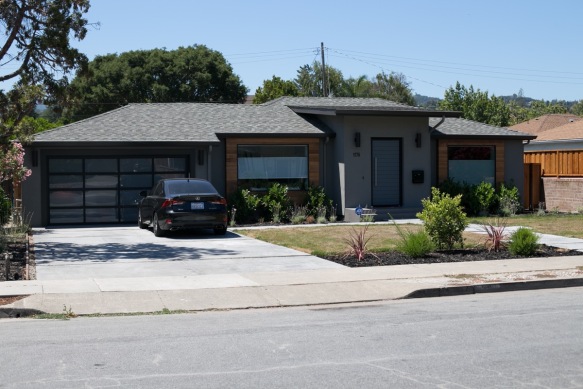 Or, there is this somewhat difficult-to-photograph house over by Roosevelt Center: 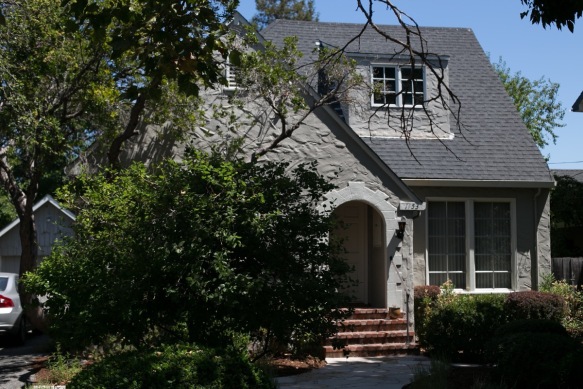 Note the differences in styles; the Roosevelt neighborhood, like most of Redwood City’s residential neighborhoods, has houses in a wide variety of designs. While it doesn’t have houses that I would classify as “estates,” it does have a few really good-sized houses, such as this one, that is still under construction: 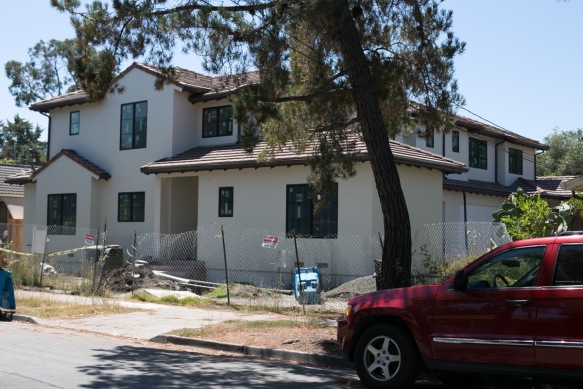 That little house I started off with was built in 1940, whereas this one is brand new. Given the sheer number of houses in the neighborhood, you could probably find a house in this neighborhood built in every year between the two.

Before I finish showing some of the neighborhood’s houses, I though I’d show you at least one duplex. This particular one is on Madison Avenue, close to Valota Road: 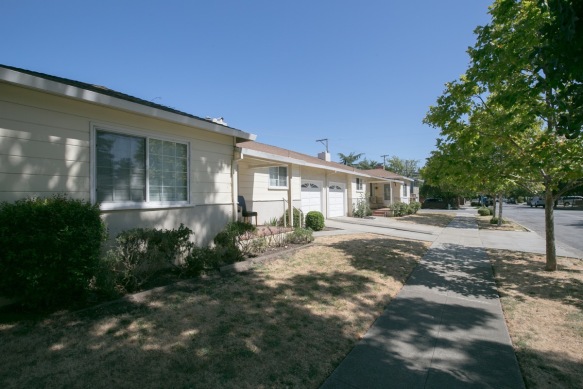 That particular duplex is very close to what has to be the Roosevelt neighborhood’s pride and joy, Red Morton Park. At nearly 32 acres, Red Morton is Redwood City’s second largest park (Stulsaft Park is larger, although, unlike Red Morton, much of Stulsaft Park is fairly natural and wild). Red Morton Park is divided into numerous sections, with multiple sports fields, two playgrounds, picnic areas with BBQs, a skate park, a public swimming pool, a par course, a set of Bocce Ball courts, a new and extensive Community Center, the Parks & Rec offices, and the Veterans Memorial and Senior Center buildings — and that’s not all. This park is well-used by the entire Redwood City community, as it should be, given that it has something to offer for just about everyone. Even for the rose fanciers among us, who can enjoy the park’s beautiful rose garden (adjacent to the Parks & Rec offices on Roosevelt Avenue): 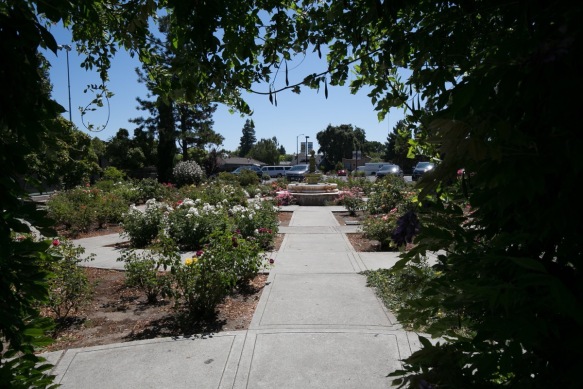 Red Morton Park is expecting two major changes in its near future. One, the Magical Bridge Playground, is well underway and is scheduled to be completed next January. This all-inclusive playground is designed for people of all ages and abilities and should be a wonderful addition for both the park and the city at large. The Magical Bridge Playground is being built at the end of the park along Valota Road, and is replacing one of the park’s two regular playgrounds.

The other major project that likely will get underway in the next year or two is the Veterans Memorial Building/Senior Center-YMCA project. This is a rather complex undertaking, one that is worthy of an entire blog post or two — which of course I plan to get to at some point. For now, though, allow me to simply borrow some of the text from the project web page:

For those interested in this project, Redwood City’s Architectural Advisory Committee will be reviewing the city’s portion of this project on Thursday, September 5, at 6:30 p.m. in the Council Chambers at City Hall. As always, the public is welcome to attend.

Moving on from Red Morton Park, a short walk down Roosevelt Avenue took me to the intersection of Roosevelt Avenue and Upton Street, the location of the Roosevelt neighborhood’s largest cluster of retail. At this intersection you’ll find Key Market, a Shell gas station, a Rite Aid drugstore, and the small Roosevelt Center, which is home to a number of retailers and service providers, including Baskin-Robbins, Little Caesar’s Pizza, Prima Deli, Summit Cafe, Oh Baby Sushi, and a handful of others: 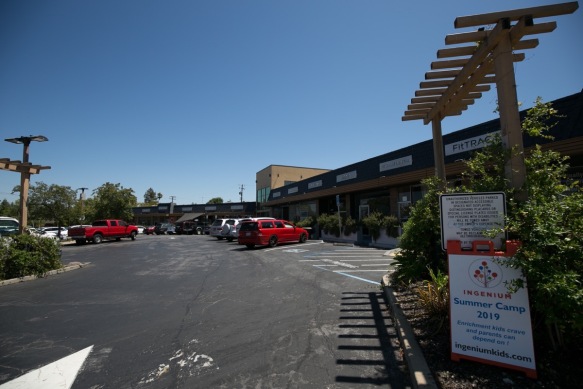 Across Roosevelt Avenue from Roosevelt Center you’ll find Dehoff’s Key Market. If you’ve never been, Key Market is a terrific independent grocery store that just recently became home to a new mural, thanks to CATA (Community Advocacy Through Art): 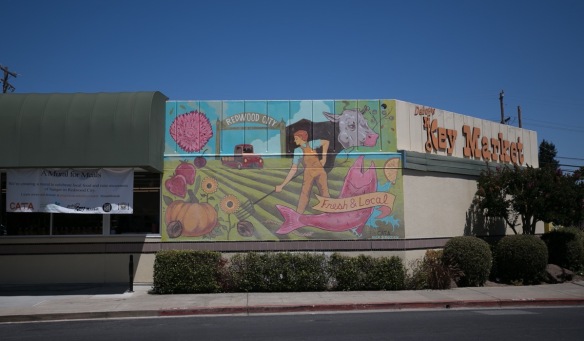 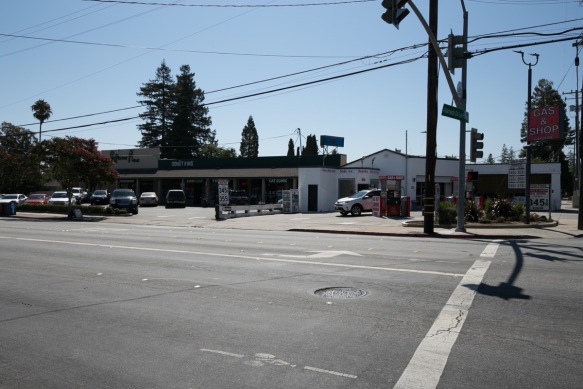 Here you’ll find a gas station next to a very small strip center grandly named “Jefferson Plaza.” Jefferson Plaza includes the small B&W Market, a Mountain Mike’s pizza parlor, the ever popular Donut King, a barber shop, and the Nine Lives Foundation cat clinic. Then, across Upton Street, there is Emerald City Liquors. Emerald City Liquors had the honor of receiving the very first CATA mural in Redwood City. Dubbed “Missing Peace,” this mural is to the left of the Emerald City Liquors entrance, and faces Jefferson Avenue. Here is a picture I took back in 2017, while that mural was being painted: 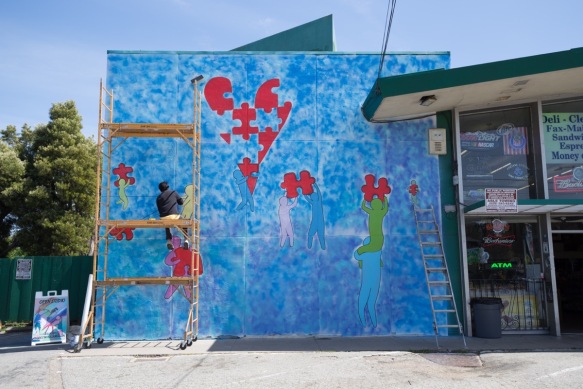 That about does it for retail. As you can clearly see from the neighborhood map with which I began this post, the Roosevelt neighborhood contains one large public school, aptly named Roosevelt School. Roosevelt School is part of the Redwood City School District and serves children in classes from Transitional Kindergarten through eighth grade.

The large Roosevelt campus cascades down the one hill that keeps this neighborhood from otherwise being completely flat. Above the school, at the intersection of Vera Avenue and Alameda de las Pulgas, is one of Incredible Edible’s small public gardens. Down towards the bottom, and over by the Euclid Avenue side of the school, is the Schaberg Branch of the Redwood City Public Library system, a nice little neighborhood library that seems designed especially to cater to the students at Roosevelt School. 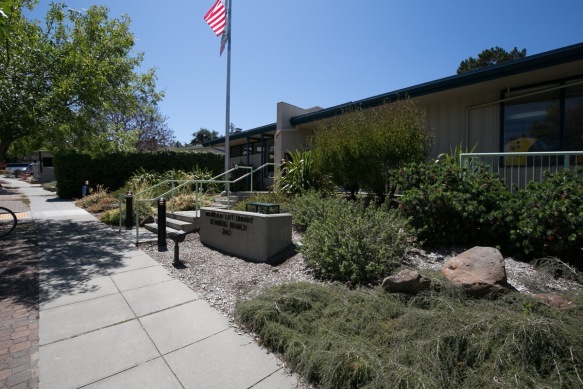 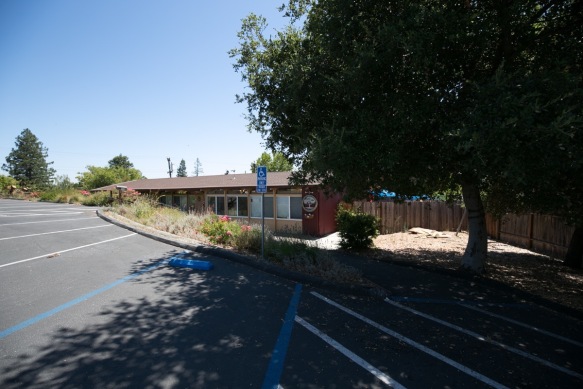