Last week found me in the Pacific Northwest, in Portland and Seattle. My wife is a loyal fan of the Stanford Women’s Basketball team, so we went to Seattle to watch the 2018 Pac-12 Women’s Basketball Tournament (the Stanford women didn’t win, although they did make it to the final game). While I enjoyed the games, I really took pleasure in seeing both Seattle and in Portland. Both are experiencing explosive growth, and I marveled at the number of construction cranes and buildings under construction. Redwood City might be booming, but it doesn’t hold a candle to what is going on in those two northwest cities. And it isn’t just the construction: their traffic has to be experienced to be believed. If you want to see real gridlock, try Seattle during rush hour! Fortunately, we mostly stayed out of that: my wife found a place to stay that was about half a mile from Seattle’s Key Arena, where the games were being played.

Naturally, upon my return I spent time exploring Redwood City to catch up on what I might have missed. After only a week there weren’t too many significant changes, of course. I was surprised to see that the Burger King on El Camino had not yet opened. Apparently they weren’t as far along as I had thought. Surely they are close to being done now, however; I expect those construction fences to come down any day now.

More surprising was something I had almost given up on: the long-empty automobile dealership at the corner of Whipple Avenue and El Camino Real is once again open for business, at least partially. This particular dealership site has been used to sell a variety of different car makes over the years: most recently it was used by the Del Grande Dealership Group to sell Chrysler, Dodge, Jeep, and Ram vehicles. But Del Grande only lasted in this spot for a little over two years, closing in early 2016 and shifting their vehicles to Redwood City’s Boardwalk Auto Mall. Last June I noticed that part of the empty dealership was getting refurbished, and soon Land Rover Redwood City hung fabric signs on the small building closest to the corner—signs indicating that they would be selling used cars there. Ever since I’ve been watching for further signs of life, but until this week there had been none. Finally, however, Land Rover has occupied part of the site:

Although I don’t believe that Land Rover Redwood City will be using either the main showroom or the service bays here (their new car sales and service operation remains on Convention Way), as you can see they’ve parked used vehicles all around the small dark grey sales office and along El Camino in front of the service area. For now the showroom and the dealership’s main lot (which sits between the showroom and the Burger King restaurant) remain empty. Given its highly visible location near one of Redwood City’s busiest intersections, though, I’m delighted that this dealership no longer looks so empty.

Seeing activity at this satellite Land Rover dealership made me want to check up on the construction of the new San Carlos Honda dealership. It still has some way to go, but they’ve made good progress over the last couple of months:

Now that the building’s envelope is nearly complete, the contractors appear to be focusing on the interior spaces. We’re still several months away from a grand opening, at which time the vehicles currently being sold from the Honda Redwood City dealership on El Camino at Hopkins Avenue will be transferred to this new site. Then, the plan is to tear down the Honda Redwood City dealership (at least, the part on the northeast side of El Camino Real) and construct 33 condominiums in its place.

Very close to the site of San Carlos Honda, also on Industrial Road, San Carlos’ giant 887 Industrial Road project has gotten underway. This project, which for a time was known as “Meridian 25,” involves the construction of two six-story office buildings plus a large six-level parking structure (three levels of which will be underground). In total the 887 Industrial Road project will replace six one-story light-industrial buildings with more than 525,000 square feet of office space. While I was gone demolition of those six smaller buildings took place; when I went by this week the ruins were being sorted into recyclable components:

The 8.4 acre site sits between Industrial Road and Highway 101, and extends from Commercial Street up to Bransten Road.

Heading back to Redwood City, I checked in on one of my favorite projects, the twelve-unit condominium development being built on the long-empty lot at 150 El Camino Real (next to the empty, rapidly deteriorating Mountain Mike’s Pizza building). The foundation forms are in, and the project looks ready for a big concrete pour: 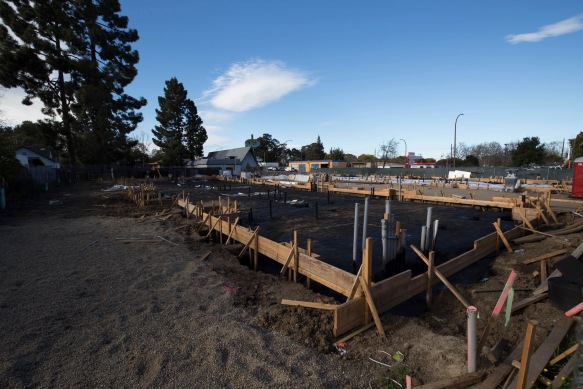 Expect to see framing begin soon. And hope that someone will soon come forth with a viable project for the Mountain Mike’s site: that building is looking worse by the day, and needs to come down.

Before heading out-of-town I had noticed a pair of cherry pickers on the fenced-in site of the future 1409 El Camino Real (“Greystar IV”) project, so upon my return I headed over there to see what was up. The cherry pickers are gone, and for some reason a number of the trees on the site have been wrapped in some sort of netting:

This one has me puzzled: protecting the trees during the demolition of the surrounding buildings makes little sense, given that the 350-unit apartment building that has been approved for this site will occupy nearly the entire property, and thus the trees will be coming down along with the buildings. Perhaps this is to prevent birds from nesting in the trees prior to the trees being taken down? Or perhaps this somehow makes the process of taking the trees down easier? If anyone reading this knows what this netting is for, do let us all know in the comments. Otherwise, I’ll ask around and see if I can learn what’s going on here.

Incidentally, I had presumed that demolition of the buildings on this site was waiting for the completion of the new W. L. Butler headquarters building being constructed behind Broadway Cleaners (at the corner of Main and El Camino Real, near Woodside Road), since the old Butler HQ is one of the buildings slated to be demolished. However, although their new home is still months away from being completed, Butler appears to have moved to temporary headquarters: their old HQ is empty, and the construction fencing that surrounds the rest of the 1409 El Camino Real project site has been extended to encompass Butler’s old building (which sits along the back of the site, along Franklin Street). So demolition could theoretically begin any day now. But perhaps not: Greystar Development may be waiting to complete their next-door Greystar III project first.

Not all of my investigations this week were on foot. I also watched a couple of Planning Commission meetings online. One of them took place just this Tuesday (I was here, but house guests prevented me from attending in person); that meeting was largely focused on the 125-unit apartment building proposed for 353 Main Street.

I have been following the 353 Main Street project ever since it was originally proposed back in 2016. Since then it has gone through a couple of redesigns, mainly at the behest of Redwood City’s Architectural Advisory Committee. On Tuesday the project came before the Planning Commission, where the developer was requesting final approval for the project. Cutting to the chase, the Commission unanimously approved the project.

The building contains a couple of medical service providers, one of whom owns the existing building. You’ll find it on Main Street not too far from Veterans Boulevard, behind the Carl’s Jr., the Sakura 2 sushi restaurant, and a two-story medical office building. Beyond the 353 Main property is the Township Apartments building. All of these properties back onto Redwood Creek, across which is the Kohl’s Plaza shopping center.

The 353 Main apartment building, when built, will be seven-stories (at its tallest; towards Main the building will be six stories high), made up of two above-ground parking levels topped by four or five floors of apartments. The building will be long and narrow with a 45-degree bend in the middle and a 90-degree bend near the back. It will be positioned so that one end—which will only be about 57 feet wide—sits on Main Street. Naturally this end is where the building’s lobby and leasing office will be located.

Of the building’s 125 apartments, nineteen will be affordable at various income levels. As was clear from watching the meeting, these affordable units made the development very attractive to the Planning Commissioners: they all commented on some aspect of the development’s affordability, and more than one complimented the developer on including the affordable units within the project rather than simply paying an in-lieu fee to the city. While some of the commissioners explored whether perhaps more affordable units could have been included in the design, they nevertheless seemed pleased with what we are getting. I should note that the mere presence of those affordable units is what allows this building to go to seven stories: without them a building on this site would, I believe, be limited to five stories.

The commissioners were also pleased with how this project will add to the in-development Redwood Creek Trail, which runs behind the Township building and which will continue behind this building. From the design and the presentation given at the meeting it appears that not only will we be getting an attractive new trail segment, it will have seating of some sort plus a publicly accessible Bocce court (expect to have to bring your own Bocce balls, however). Between 353 Main and the Township building there will be a wide public access path for the Redwood Creek Trail that doubles as an emergency access lane in the event of a disaster. On the Carl’s Jr. side of the building there will be another path providing public access to the Redwood Creek Trail, along with three public parking spaces for trail users. Although this trail segment won’t be terribly long, it is an essential link in the chain that will hopefully one day make for a great place to walk.

While I was gone a lot of little changes were made that really add up. And I haven’t even mentioned the preliminary results that the Parks consultant presented to the Planning Commission regarding a possible new downtown park! Because that presentation will be made to the City Council at next Monday’s meeting, I’m going to wait until next week before reporting back on what the consultant had to say. As usual, though, Redwood City’s growth continues to provide me with more than enough to write about. Even though the changes we are experiencing are nothing compared with what is going on in Seattle or Portland, I know that for most of us, those changes are more than enough.