When this old world starts getting me down
And people are just too much for me to face
I climb way up to the top of the stairs
And all my cares just drift right into space
On the roof, it’s peaceful as can be
And there the world below can’t bother me
Let me tell you now…

[“Up On The Roof,” written by Carole King and Gerry Goffin]

There’s something special about being up high and looking out on the world. Like most children I loved climbing trees, and once up there I happily would sit and watch the world go by. My folks had a second home with a third-floor balcony, and when we were there it became my happy place: I would sit up there with a book, quietly reading and watching people go by. As long as I remained quiet, no one ever looked up. Although I only saw a narrow section of the street and never saw anything exciting, as a kid I really felt special, sitting on my high perch and watching the world below.

I know I’m not alone in getting a special feeling from high places. There is no denying that the view from up high is just better than from ground level. Thus, when we encounter a high-rise building, naturally most of us gravitate to the higher floors. In Redwood City these days, with our abundance of (relative) high-rises, there are numerous places where people can stand and watch the city below. Unfortunately, though, pretty much none of those places are publicly accessible. Almost all of our new residential and commercial multi-story buildings have balconies or rooftop decks that allow people to get some fresh air and take in the sights, but those areas are almost always reserved for the residents and guests of the building, and are not accessible to the public at large.

When walking around Redwood City to photograph the goings-on, as much as possible I try to take pictures from above: generally such a view allows me to see my subject clear of obstructions. I’ve taken several from up in Emerald Hills, but those are distant shots only: I cannot get a close-up of an individual project from up in the hills. I also take pictures from the top of the few parking garages we have downtown, but those garages aren’t very high and they only afford me a view of projects that are close by. For instance, throughout its construction I was able to get some nice pictures of the office building being constructed at 550 Allerton by climbing up to the top of the County garage—pictures like this one: 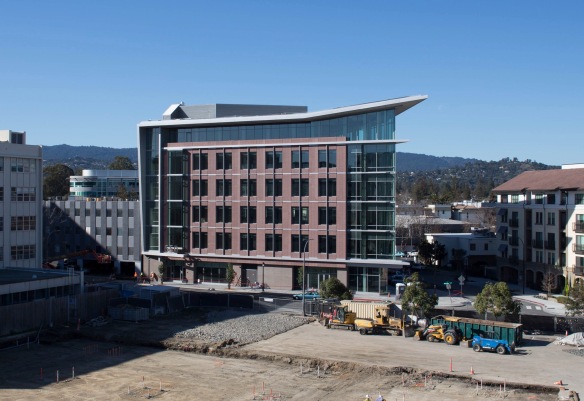 Now that 550 Allerton is pretty much wrapped up I’ll continue to climb that garage to take pictures of the county’s new Public Safety Regional Operations Center, which is being built on the lot in the foreground, above. But other projects don’t have such a convenient, publicly accessible parking garage nearby. While I could conceivably ascend one of our garages just to enjoy the view, I can’t really hang out there as I might if it was the rooftop deck of a building to which I had access. What I really would like is to be able to go somewhere like this:

This is the Franklin 299 building’s rooftop deck. Although the building isn’t all that high—six stories, or about 69 feet—as you can see the view is nevertheless a great one. But while I was fortunate to be able to tour the place with a representative from the builder, normally this view can only be enjoyed by the building’s residents and their guests, so I don’t expect to get up there again.

I must admit that the thought of all of these relatively private rooftop (or close to it) spaces in the various buildings in downtown Redwood City has me a bit jealous. I’m not going to be able to go up and see them all, so I wanted to at least point out some of the more interesting ones.

Apparently there is a smaller deck at the level of the eighth floor, in that little notch you can see in the above photo. Because it is so much higher than the parking garage I cannot see that one directly, but thanks to publicly available satellite imagery it does appear that there are some couches and chairs up there.

You would think that with all its height, the nearby ten-story Indigo Apartments building (the tall blue-and-white building between Middlefield and Jefferson, along Bradford Street) would have a nice rooftop deck, but that doesn’t appear to be the case. Instead, any high views from that building are limited to those you get from within the individual apartments and from their balconies. The complex’s common space appears to be at a low level and entirely surrounded by the high-rise buildings that make up the complex, presumably eliminating any views that might have otherwise been had.

Just a couple of doors down from Indigo along Middlefield, at the corner of Middlefield and Marshall, is the 601 Marshall Street building. This building has a very intriguing round terrace on its top floor, crowning the cylindrical feature that marks this building’s entrance:

If you look closely you can just see the glass panels that serve as the balcony’s railing. I’m not sure what the building’s future tenants plan to use this particular space for, but I should note that at 40 feet in diameter it isn’t huge. But the building has a second, larger outdoor terrace that will presumably see a lot more use by the majority of the building’s tenants. In the above photo you can just barely see this second terrace sticking out from the left end of the building, above the building’s second level. You can see it better from the top of the County Parking Garage:

Here, too, they are using a glass railing to keep people safe.

The round terrace at the top of the 601 Marshall building reminds me of the square one at the top of 201 Marshall. Although this apartment building, has a very different look from 601 Marshall (and, indeed, from just about every other building in Redwood City!), it too has a corner terrace on the top floor:

201 Marshall was one of the first buildings to rise out of our current building boom, along with the so-called “Box buildings.” Although the two Crossing 900 (“Box”) buildings don’t have rooftop terraces, there is one on the “bridge” that connects the two buildings, above the entrance to the internal parking garage: 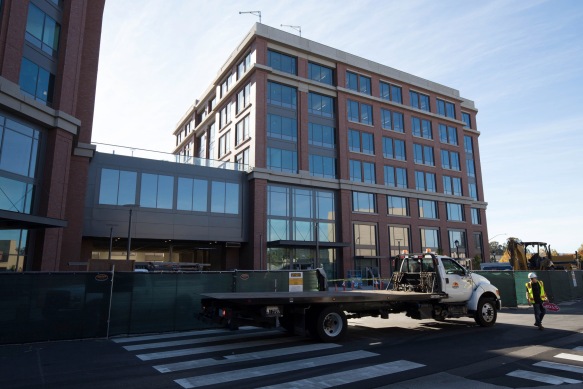 This particular terrace isn’t very high and looks out over the top of Sequoia Station. The L-shaped space is much bigger than it appears from below, however, and seems to be a nice place to enjoy one’s lunch or to take a brief break from work. Here is an overhead view of the terrace, thanks to Google Maps’ satellite view:

In the center of the photo, along the top edge, there is a not-too-recent view of the 815 Hamilton Street project’s own “rooftop” terrace. This one, too, is not actually located on the building’s topmost roof, but instead sits on the building’s third level, above Theatre Way. In the above image you can see the metal framing for the square “gazebo” that will provide protection from the elements to part of the terrace. About the time that this satellite photo was taken I took a picture of the building from ground level; if you peer between the trees you can just barely make out the gazebo’s metal framing:

Today, that framing has been wrapped in brick, making the “gazebo” look more like part of the building itself. It may not look like it today, but there is a 2,700 square foot terrace up there (including the gazebo, which covers about 850 square feet of that terrace).

All of the buildings I’ve talked about so far are relatively large commercial or residential structures. But even some of the smaller buildings in Redwood City are gaining rooftop decks. For instance, the old Young’s Auto Parts building at 929 Main Street is about to undergo a remodel that will add a second story to the back half of the building. In front, above the first floor along Main Street, will be a roughly 2,000 square foot terrace that might be used as an outdoor patio for a restaurant.

Elsewhere in our downtown, on Broadway roughly across from City Pub, the building at 2635 Broadway is gaining a small second-story addition and a small rooftop deck. Unlike with 929 Main, however, the deck will be along the rear and the side of the second-floor space, and won’t extend across the front part of the building. Thus, people using this deck won’t be looking down onto Broadway but will instead be looking over the top of the AutoZone store, and across El Camino Real to the Sequoia High School property. This weeks-old picture shows the second floor addition being added to 2635 Broadway:

That deck may not have the best views, but I’m sure the employees (this deck isn’t large enough to be open to the public) who get to hang out up there will nevertheless enjoy the space.

Before I wrap up I should also note that there will be a rooftop deck on the new W. L. Butler headquarters building being built on Main Street where it angles off from El Camino Real:

Although primarily a commercial building, it is topped by two 1,070 square foot apartments (that little grey rectangle you see at the top of the building in the above photo is one of the apartments). In the above photo the rooftop along the right end of the building, to the right of the apartments, is a rooftop terrace. Presumably the terrace for use by whoever is staying in those apartments, although it may also be for the use of the building’s commercial tenants. That terrace looks out over the Five Points intersection, and over Middlefield Road—not exactly the most exciting view, and one that is likely to be somewhat noisy.

Those who are fortunate enough to live or work in one of the new or remodeled buildings in Redwood City with a rooftop deck or terrace will be able to look at Redwood City from an angle that most of the rest of us likely never will. Like a kid sitting in a tree, they’ll be able to look down and watch as Redwood City goes about its business, secure in the knowledge that those of us down on the ground will likely never look up to see them. Although now that you know that those terraces are up there, look up from time-to-time. You never know who might be up on the roof!

4 thoughts on “Up On The Roof”