Isn’t it interesting how easy it is to fall into a rut? Like many people I am a creature of habit, so when someone suggests that we go out for dinner and asks for ideas, I usually recommend one of a half-dozen or so restaurants. While I feel that you can’t go wrong dining at LV Mar, Aly’s on Main, Timber and Salt, or Vesta, for instance, truly these days Redwood City has many, many other restaurants worth checking out.

Although my first instincts are to stick with the tried-and-true, I do have a natural curiosity. That, coupled with the fact that I am always looking for things to write about, spurred me to try out two places not on my usual list, one that is new to Redwood City, and one that has been around a while.

Before going farther, note that I’ve only tried each of these places once. When doing a full restaurant review I prefer to pay them multiple visits, both to judge their consistency and to let me explore the menu. So these are first impressions only, to be taken with a grain of salt. In both cases I expect that I’ll be going back, and if my initial impressions are proven wrong I’ll certainly let you know. Of course, if you’ve tried either of these places and care to share your opinion, do!

On Friday night some friends suggested dinner out. Since they like sushi—and I am no aficionado—we seized upon the opportunity to try one of our newest Japanese restaurants, Hikari Sushi and Grill. Hikari isn’t too far from home, so after posting last week’s article my wife and I, along with our two friends, walked over. 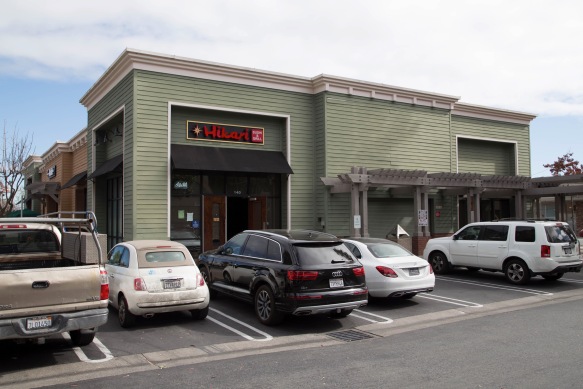 Hikari Sushi and Grill is located in the tiny strip center at the corner of Whipple Avenue and El Camino Real, in the storefront that was once home to Pasta Pomodoro. If you remember that place you’ll feel right at home at Hikari: the layout is pretty much identical, with the kitchen and hostess desk in the exact same places, and the tables arrayed much as they were previously. The decor has changed quite a bit, however: the old Italian photographs and posters are gone and Hikari now has wood planks on the floor, the booths, and most of the vertical surfaces to give the interior a somewhat darker and more intimate feeling.

Upon our arrival at around 6 p.m., the restaurant was about half full. We didn’t have a reservation—they do take them—but that was no problem and we were promptly seated in a booth midway into the restaurant, opposite the kitchen. Our server arrived promptly, and helped us select a sake. They have quite a variety, and I was pleased to see that they’ve helpfully listed them on a scale from dry to sweet.

Our server was eager to take our food order, but we had to send her away a couple of times so that we could sufficiently study the menu. Hikari’s menu is quite extensive, and thus should have something to satisfy just about anyone. Because my wife and I are not big sushi eaters—she can’t eat shellfish and isn’t big on seaweed (which the rolls are wrapped in)—we tend to avoid the category altogether. I don’t have the same dietary restrictions as my wife, however, so I do occasionally try some of the more traditional sushi menu items.

Having given Hikari’s menu the once-over online before we got to the restaurant, my wife thought she knew what she wanted. That is, she didn’t know what it was called, but a picture of an entree on their website looked perfect, so she brought up the picture on her phone and showed it to our waitress. Curiously, the waitress didn’t recognize the entree, and took the phone over to the cooks to see if they could help. They came up with a name for the entree—but it wasn’t something that was on Hikari’s menu. Instead, the waitress suggested something that she thought might do—Beef Yaki Udon—and so with some trepidation what my wife ordered that. I ordered the Beef Teriyaki (which, as a “dinner set” came with miso soup, rice, and spring mix salad) and an order of avocado rolls. One of our friends ordered (I believe) Chirashi Don, while the other ordered a plate of sushi rolls.

Our friends tell me that they enjoyed their food very much. And although she had to push past the fact that what she received looked nothing like what she had hoped to order, my wife says that the Beef Yaki Udon was indeed good. As for me, I thought my Beef Teriyaki was properly cooked and covered with a delectable sauce. Together with the small bowl of rice that accompanied it, I found my entree to be delicious. The salad and miso soup were also quite good: I ate and drank every bit of them. Finally, the Avocado Rolls—rice and avocado wrapped in seaweed—were very good and went well, I thought, with the rest of my meal. All-in-all, we enjoyed the variety of dishes we were served and all agreed that we’d go back.

As for pricing, we paid about $130 for the four of us, including tip but not including the sake (the price of which varies quite a bit, I learned).

By the time we left, every table was occupied and several people were waiting. It’s too early to tell how Hikari will do long-term, but so far, so good. One word of warning for those who have never been to this particular center: there don’t seem to be enough parking spaces to meet peak demand, and the spaces that are there feel a bit tight. Thus, don’t be surprised if parking is somewhat of a challenge. That notwithstanding, if you enjoy Japanese cuisine, this non-expert recommends that you give Hikari a try. I plan to go back, and will write more about them—hopefully after also trying some of their upcoming competitors. Hikari Sushi and Grill is open 7 days a week, from 11:30 a.m. to 2:30 p.m., and from 5 p.m. to 10 p.m.

The second restaurant I was able to try this week is Squeeze In (not “Inn”, as you might expect), a breakfast and lunch place in the Marsh Manor shopping center. Once upon a time my wife and would go to Bob’s Courthouse Coffee Shop in Redwood City when we wanted to go out to breakfast; when it closed we had to search far and wide for a suitable replacement. We finally settled on My Breakfast House in San Carlos, on Laurel just down from Brittan Avenue, but ever since I became aware of Squeeze In I’ve been meaning to give them a try. Last weekend, we finally did just that. 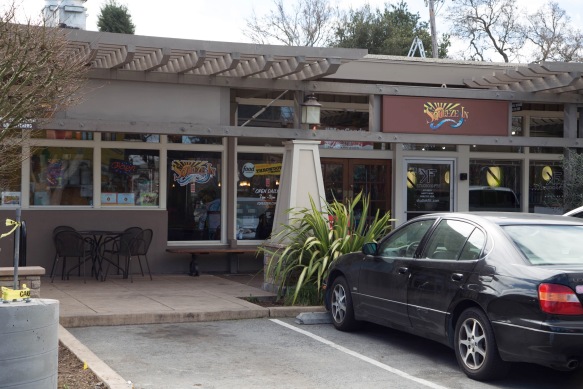 Squeeze In is a small chain with outlets in California and Nevada. Their original location, in Truckee, California, had 49 seats in a space just over 10 feet wide (but fairly deep, presumably!). People had to “squeeze in” to get to their seats, giving the quirky restaurant its name. Squeeze In prides themselves on their omelettes, claiming that they serve the “best omelettes on the planet.” Neither I nor my wife had an omelette on our visit, so I’ll have to defer judgement on the veracity of their claim. Certainly the omelettes served to nearby tables (which were indeed nearby; Redwood City’s location may be bigger than their original Truckee one, but it still isn’t what you would call huge) looked good. Be forewarned that Squeeze In’s omelettes are made with four eggs, and are on the large size. The couple at the table next to us elected to split one, which seemed a wise choice.

Omelettes aren’t the only thing on their breakfast menu, of course. They have many of the usuals, including pancakes, French toast, various kinds of Eggs Benedict (with three eggs), and Huevos Rancheros—which I ordered. Note that most of the menu items have cutesy names and lengthy descriptions, meaning that you’ll need to spend time actually reading the menu (you can see it online here). That’s not an issue for regulars who know what they like, and I’m sure you can just tell your server what you want and they’ll bring you the appropriate item, but it took quite a while for these first-timers to figure out what to order.

My wife searched the menu for waffles, but apparently they don’t serve them. Instead she ordered the “Quintana Roo,” which consists of two large pancakes, two eggs, and bacon. She enjoyed her food, but quickly realized that there was too much of it: for her, one pancake would have been just right. Oh, and she of course had coffee, which she liked. She proclaimed it “strong, but not bitter”—which I guess is a good thing (I don’t drink coffee, myself).

As I said, I had the Huevos Rancheros (or, in Squeeze In speak, “Huevos Montana”). Squeeze In makes them with two eggs, which I ordered poached, and tops the usual concoction with avocado, black olives, and sprouts. The sprouts seemed a little weird to me, but overall I enjoyed my breakfast very much.

Squeeze In seems to have an extensive lunch menu. And they serve “adult beverages,” even at breakfast. So if you want a Mimosa (one table next to us had a pitcher!) or a Bloody Mary with your eggs, head over to Squeeze In.

As for atmosphere, the place is on the small side, and pretty loud: my wife and I had a hard time hearing one another over our table for two. The decor is kitschy, with graffiti-covered walls and old bicycles, skis, and other random items hanging from the walls and ceiling. But it is fun and “hip,” and I’m not complaining. If I have any one issue with the place, it would be the price: our bill, for two entrees and a cup of coffee, came to $33 before tax and tip, which seems steep when compared with our usual places. Given the large portions this may be fine for some, but on a subsequent visit I may find myself looking closer at the à la carte items.

Thanks to Hikari Sushi and Grill and to Squeeze In, this week I managed to dislodge myself from the regular set of restaurants that I, as a creature of habit, seem to have settled into. While I’m not sure that either of these places will get added to my set of regulars—I don’t eat a lot of Japanese food, and I like the prices better at my current breakfast favorite—both have a lot to recommend them, and I expect to be back to both at one time or another. In the meantime, I’ll redouble my efforts to try other new places, and to pull myself out of the restaurant rut I seemed to have been in.

The Impossible Burger—which was invented right here in Redwood City (see my blog post from last May)—is finally available in Redwood City! I haven’t tried it yet, but if you are interested know that you can now get this revolutionary plant-based burger at Main & Elm. 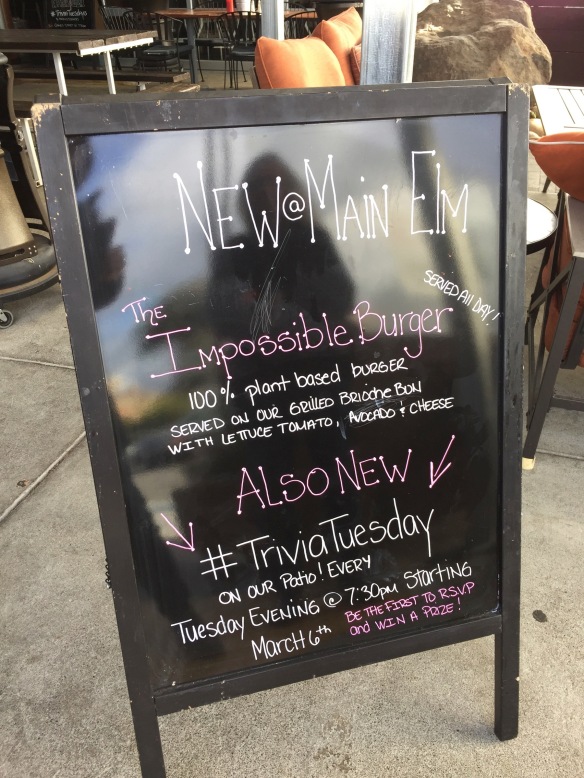 4 thoughts on “A Creature of Habit”