Earlier this week I had a number of people ask what this week’s blog post (the one you are reading now) was going to be about. Before Wednesday I rarely have a solid answer since I usually give my brain the weekend off and only begin thinking about my next column when Monday rolls around.

On Monday I usually take a walk and go online to gather ideas. On Tuesday I start to think about those ideas while going over the long list of things I hope to write about someday. Based on all that I start a preliminary outline and then, armed with that outline, I assemble a list of photographs I might include. Wednesday often finds me out taking pictures and gathering additional ideas, for use either that week or in the future. I spend some time on Wednesday firming up my outline, and usually start on a draft of the post.

Thursday is my big writing day. I try to complete a full draft by the end of day on Thursday, complete with pictures, links, and a preliminary title. That leaves Friday as the day when I can trade my writer’s hat for my editor’s hat: looking at the article with fresh eyes, I tighten it up (my first drafts are almost always too long), play with the wording, and firm up the title. I then upload the post to WordPress.com, tweak the formatting, and re-read the entire thing on the server, looking especially for typos and any formatting problems that might only appear in a web browser. Lastly, I hit “Publish.” I end my work day by sitting back and mulling over ideas for the next week’s post, giving my subconscious something it can chew on over the weekend.

Sometimes my blog posts are about one or two large topics. Other times, as is the case this week, they are about a number of small ones. Whenever possible I try to tie the topics together into some sort of unified theme, but sometimes I just end up with a grab bag. This week is one of the latter; a bit of this and a bit of that.

On my way downtown this week to see if there was anything worth writing about, I didn’t get far before something new caught my eye: 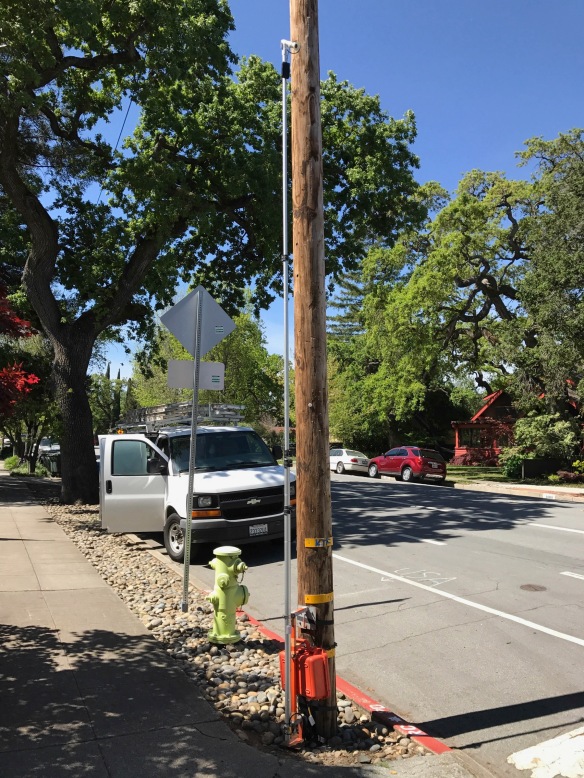 I noticed a couple of these orange boxes at intersections along Hopkins Avenue. These “Temporary Video Surveillance Units” are a more high-tech version of the ones you sometimes see with rubber hoses running across the street: they both count cars. But whereas the rubber-hose variety is limited in what it can count, these camera-based ones (note the small digital camera at the top of the 21-foot metal pole) don’t just count cars: they can count bicycles and pedestrians, too. They are able to observe turning movements, gaps between vehicles, queue lengths, and more. Hoping that they were there in service of the Hopkins Avenue Traffic Calming Project, I checked with Jessica Manzi, our Senior Transportation Coordinator who confirmed that indeed that was the case (they’re gone now).

The Hopkins Avenue Traffic Calming Project is intended to improve safety along Hopkins for pedestrians, cyclists, and cars alike. The city is hoping to encourage more people to walk or bike both to Stafford Park and to other parts of the neighborhood, and making things safer should help with that. It should help with traffic, too; we seem to have far too many accidents in this area, particularly at the busy intersection of Hopkins and Hudson Street. Expect the design to be done and made public later this year. For some idea of what might be involved, watch the nearby Hudson St Pedestrian and Bike Improvement Project, which is currently being constructed; it should be complete by late summer.

For some time now I’ve noticed that our beloved downtown sidewalk shadow art has been getting a bit shabby: all that foot traffic is taking its toll on the paint. After a friend pointed out that recent sidewalk work had cut right through one of the paintings, I headed over to the Century Theatres to check it out. Indeed, on the Broadway side of our downtown movie theaters one of the bench “shadows” has taken a real beating: 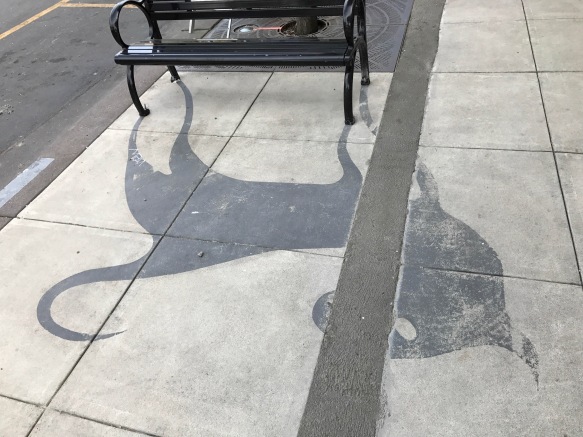 Fortunately, I’m told that these ever-popular downtown works of art will soon be receiving a touch-up.

On my way to see the damaged artwork I noticed that Broadway Masala is finally nearing completion. The restaurant’s exterior is looking great; it lacks only signage and exterior light fixtures to be complete. As for the interior, well, see for yourself: 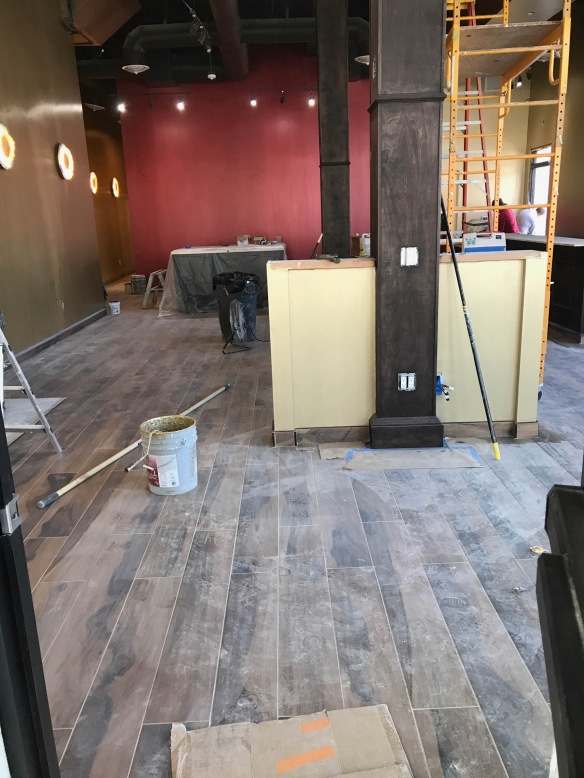 As you can see, they’re getting down to the finishing touches. The floors are in, the walls are painted, the light fixtures have been installed, and cabinets and counters are going in. Those of us who love this place should be eating there again very soon, it seems…

Incidentally, as long as I’m on the topic of downtown restaurants, I had heard that Open Paint—an art event where community members can come together and paint—had suddenly switched locations from Pizza and Pints to Cyclismo Cafe. That had raised my radar, and so I made a short detour over to Pizza and Pints to see what was up. What is up is that they are closed. From a sign on the door it appears that they were shut down by the city’s Building Department for unsafe conditions and for doing work without the proper permits. Hopefully their contractor will make the required changes, allowing Pizza and Pints to re-open soon.

One of my targets for my Monday walk was the shopping center on Veterans Boulevard directly across from Casa de Redwood. The storefront which formerly housed Pet Food Depot (between Hoot Judkins and Party City) is currently being filled with antiques: it is the new home of Antiques Then & Now. 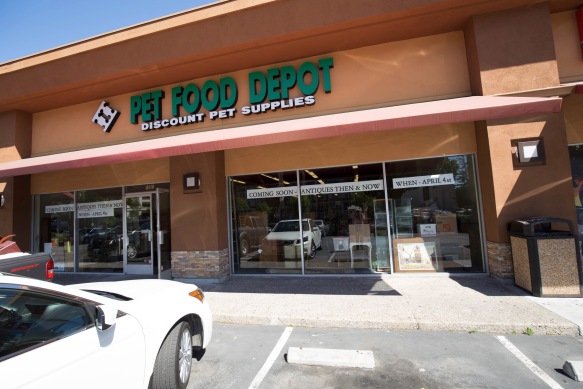 I had hoped to go in, but they clearly were not ready to open. Their window signs indicated that they’d be opening the next day—“April 4st” [sic]—but my wife dropped by on the 4th and was told that they had badly underestimated the effort involved in moving their business from its former location in San Carlos (on Industrial Road near Brittan Avenue, across the parking lot from Office Depot). Originally they had hoped to open their Redwood City location on the first and then the fourth (which is why the sign says “April 4st”; they just changed the 1 to a 4), but now they say they may need another two weeks to get properly moved and set up. So give them a bit of time, and then drop in and welcome them to Redwood City! My wife and I have enjoyed their store in the past and have bought a handful of antiques from them. We certainly will continue shopping there and are pleased that they are now even closer and easier to get to.

After looking in on Antiques Then & Now I wandered over to Redwood Trading Post, which is only a block further down Veterans. In doing so I learned that their neighbor, Tom’s Outdoor Furniture, has recently moved to a larger space in a different part of town: they are now on Haven Avenue, a bit north of Marsh Road on the bay side of Highway 101 (just past the Porsche dealership). I haven’t yet been into their new location, but as I’ve purchased outdoor patio furniture from them in the past I’ll keep them in mind if I need any more. For now, their empty Veteran’s Boulevard location—which is for lease, of course—means that there is even more available parking for those of us who frequent Redwood Trading Post.

Heading back towards downtown I wandered down Maple Street and was delighted to see the progress being made on the transformation of the old Schroeder Sheet Metal, Inc. shop. Until very recently Schroeder’s, which was located at the corner of Maple and Hilton, made gutters, installed heating and air-conditioning systems, installed skylights, and repaired furnaces. Their classic old building, which sits in a heavily residential area, is being converted into a single-family home. The architect wisely preserved the shape of the original building but has replaced the building’s sheet metal exterior with lovely old barn wood and, along the bottom of the exterior walls and around at least one door, steel plates. When finished this house is going to look terrific: 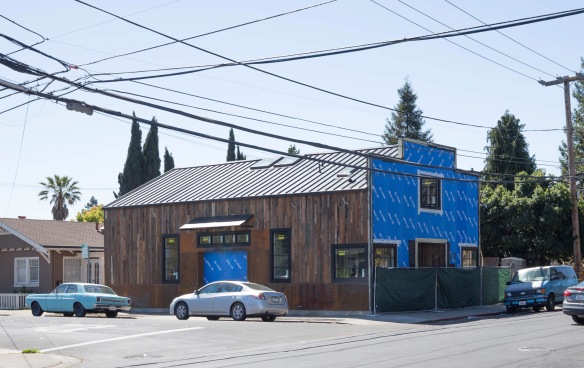 I for one could see myself living there. Kudos to the architect!

Getting away from downtown, I want to provide an update on Linden Park. I’ve written about this little park before: it’s located on the Hetch Hetchy right-of-way just behind University Art Supply, extending diagonally to Center Street (the street that dies into the Target parking lot at El Camino Real). Here is a link to the conceptual plan for the park, if you aren’t familiar with this project. Back in February, when I last wrote about it, the park was basically just an empty lot—but work commenced on the park shortly afterwards, and they’re making great progress: 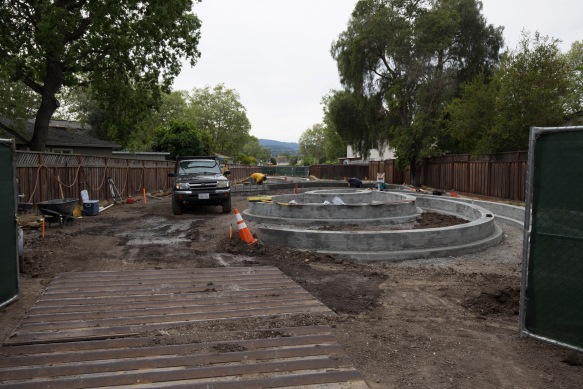 I for one can’t wait to see the final product. According to a sign on the construction fencing, the city expects the park to be open again this June.

From Linden Park it is only a short hop out to Woodside Road and the former location of our Dairy Queen. As I’ve previously noted, the Dairy Queen shut down some months ago. It seems that the franchisee elected to drop their Dairy Queen franchise and instead turn their small casual restaurant into something new. And now we have it: Ohana Express. 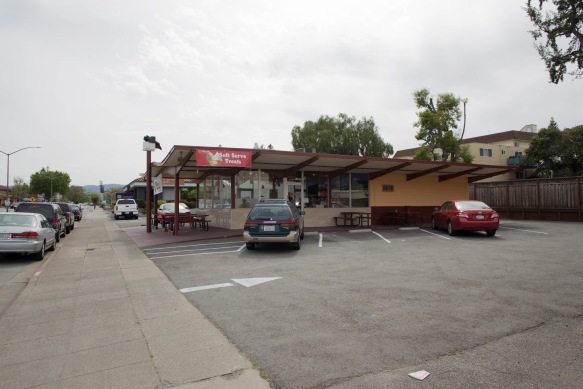 Their banners advertise “Burgers, Bowls, Desserts” and “Soft Serve Treats.” Given their name, and the fact that Yelp classifies them under “Ice Cream & Frozen Yogurt, Burgers, Hawaiian,” it appears that they are both trying to give the public something different—Hawaiian BBQ, it seems—while retaining most of their old clientele. I have yet to give them a try, but will report back if and when I do.

That’s pretty much it for this week, except that I wanted to pass on the news that Redwood City Restaurant Week is coming up. This year it is scheduled for the week of April 20-26 and is being supported by some thirteen Redwood City restaurants ranging from Go Fish Poke Bar to The Striped Pig to LV Mar. Each participating restaurant will be “cooking up a special multi-course, prix-fixe dinner menu just for this event.” For more information, I refer you to the Redwood City Restaurant Week website.