Last weekend I watched with horror as the events unfolded at the Oroville Dam. The sight of all that water pouring over the emergency spillway was bad enough, but the aerial shots of the traffic jam that resulted from the emergency evacuation was even worse. The thought of all of those people stuck in traffic being engulfed by a thirty-foot-high wall of water was terrifying. Fortunately, so far that image was only in my head and not on my television screen. But as I write this more rain is falling. Hopefully Lake Oroville’s water level has been lowered sufficiently so that the incoming flows won’t cause the lake to once again reach emergency levels.

The sheer amount of human destruction that such an event could cause is of foremost concern, of course. But secondarily I find it frustrating that just now, as we are starting to emerge from our multi-year drought, the state’s second-largest reservoir (Shasta Lake is the largest) is being forced to dump millions of gallons of the precious life-giving liquid. Although the water that is held in Lake Oroville doesn’t supply our part of the state—according to Wikipedia it is used to irrigate some 755,000 acres of San Joaquin Valley farmland and to supply potable water to some 25 million residents of Southern California—the loss of a significant amount of that water would affect our food supply and the livelihood of a great many of our fellow Californians. And it would presumably result in the state having to divert water from other parts of the system, which could then affect those of us in Northern California more directly.

California’s water system is complex and has a very rich history. Growing up in Southern California I paid it little attention, but as I got older I came to realize that every resident of a southwestern state would do well to have a basic understanding of how the system works and just where our water comes from. Years ago I read Cadillac Desert, a book that explains how we got to the system we rely upon so heavily today. And of course I’ve watched the movie Chinatown, which, although mostly fiction, has a great deal of fact underlying the movie’s plot. I’ve written numerous blog posts in which I’ve mentioned the Hetch Hetchy right-of-way that slices through Redwood City, but I’ve never really delved into the system upon which we so heavily depend. Thus, even before the Oroville Dam came to dominate our news, I had decided to write about where Redwood City’s water actually comes from.

Redwood City purchases all of its potable water (that is, the water that you drink, cook with, and bathe in) from the San Francisco Public Utilities Commission’s Regional Water System (SFPUC RWS). Presumably due to conservation, the amount of potable water the city purchased in 2015 was the lowest it has been for the last ten years. In 2007, when the service area population (which extends beyond the city limits; Redwood City services not only its residents but also Cañada College and the Emerald Lake Hills area, plus parts of the Town of Woodside and the City of San Carlos) was just short of 83,000 people, total demand for potable water amounted to 13,072 acre-feet of water (one acre-foot is the amount of water needed to cover an area one acre in size to a depth of one foot, and amounts to 325,851 US gallons). In contrast, for the year 2015, when the service area population had increased to just over 87,000 people, total potable water demand had dropped to 8,876 acre-feet—just about 2.9 billion gallons.

So where does all that water come from? 85% of SFPUC water starts as runoff from the upper Tuolumne River watershed on the western slope of the central Sierra Nevada—which is located primarily in Yosemite National Park. That water flows down the Tuolumne River into Hetch Hetchy Reservoir, and then through a series of pipes, tunnels, reservoirs, pump stations and water treatment plants. From there it goes to the various SFPUC customers, Redwood City being one. The remaining 15% of SFPUC’s water (and therefore, our water) is obtained closer to home, from the Alameda and Peninsula watersheds. This water is captured and held in six different reservoirs, two within Alameda County and four within San Mateo County.

Curious to see them for myself, I made a trip over to the East Bay in an attempt to get some photographs of the two Alameda County reservoirs. Unfortunately San Antonio Reservoir and Calaveras Reservoir are very difficult (if not downright impossible) to get to, presumably to preserve the integrity of the system. Both of these reservoirs, which are fairly close to one another, lie near Calaveras Road. However, the only roads I could find leading directly to San Antonio Reservoir lie behind locked gates. And Calaveras Dam, it seems, is undergoing repairs which have necessitated the closure of Calaveras Road just north of the reservoir, so I couldn’t get anywhere near to that one. But I did manage to find a road that wound through the hills north of San Antonio Reservoir, and from the side of the road managed to get a photo of part of it:

As for Calaveras Reservoir, I’ll rely instead on a satellite photo courtesy of Google: 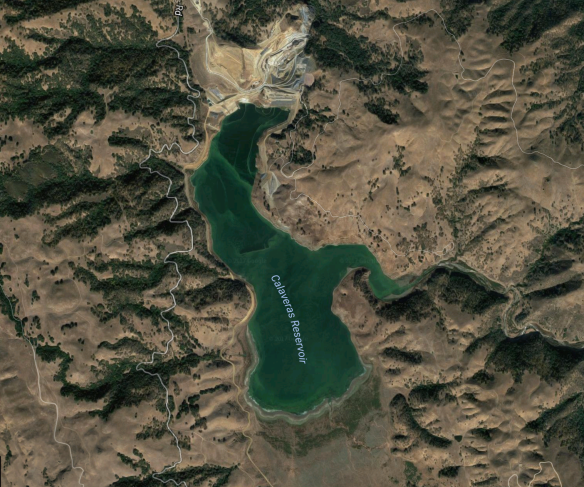 Closer to home, the four reservoirs in our area are:

These, too, proved very difficult to photograph. Fortunately, back in 2013 I was able to hike through the Crystal Springs watershed (you need to be escorted through, since the area is secured to maintain the integrity of our water supply) and thus I have some photos taken from the hills on the west side of the Crystal Springs reservoirs, such as this one:

All six of these reservoirs gather water from their surrounding area (the “watershed”). Some rain falls directly into these bodies of water, of course, but a great deal falls onto the surrounding landscape and some eventually works its way into the reservoirs via creeks, streams, and rivers. The Alameda watershed, which feeds the two East Bay reservoirs, is about 112,000 acres in size (36,000 acres of which are owned by the SFPUC). The Peninsula watershed (which drains into the four local reservoirs) encompasses some 23,000 acres. But as I noted earlier, water gathered from these two watersheds accounts for only 15% of the water we receive from the SFPUC. The bulk of our water comes all the way from Yosemite National Park, through the Hetch Hetchy system. And some of that Hetch Hetchy water feeds into two of our reservoirs: San Antonio Reservoir in the East Bay and the combined Crystal Springs Reservoir not only gather water from the surrounding watershed but also receive water piped from the distant Yosemite.

The pipeline from the Hetch Hetchy Reservoir (which is located within the bounds of Yosemite National Park) runs across the central valley to Fremont, a distance of some 167 miles. There, it splits into five pipelines ranging in size from 60 to 96 inches in diameter. Two of the pipelines run around the southern end of the San Francisco Bay, while the other three cross the bay just south of the Dumbarton Bridge. The pipes come back together near Palo Alto and then make their way up to our local reservoirs and to San Francisco. Along the way, taps enable SFPUC customers such as Redwood City to gain access to the water.

If you walk around Redwood City, as I do, you periodically find yourself crossing the empty strip of land known as the Hetch Hetchy right-of-way, beneath which run the system’s pipelines. Two weeks ago, in my post Setting the Pace, I mentioned that Linden Park lies entirely on a section of that right-of-way, and included a picture that shows just how arrow-straight much of the right-of-way is. Here is a picture I used in an early post, showing the view of the right-of-way from Upland Road:

Although homeowners are sometimes allowed to erect fences and even plant gardens on the right-of-way, it remains the property of the SFPUC and they retain the right to enter the property and tear down anything they find there if needed to maintain the pipes buried beneath. Thus, most of the right-of-way remains empty.

Thanks to the miracle of modern technology, below is a satellite photo showing the area around Red Morton Park. While the park is the most prominent feature in this photograph, what likely catches your eye next is the sand-colored line that crosses the center of the photograph from one side to the other:

As I’m sure you have guessed, that line (which becomes gray in a few instances where roads and parking lots encroach) is the Hetch Hetchy right-of-way. Looking at Redwood City from overhead, as in the above image obtained from Google Earth, the sheer magnitude of the pipeline comes into focus. What is easy to overlook when driving around the city becomes quite obvious when viewed from an angle such as this.

There are a couple of places where the pipes themselves become visible—along Edgewood Road, for instance—and if you know where to look there are a few water tanks scattered about (see my post Tanks a Lot for the locations of those). But for the most part the system lies beneath our feet, silently providing what is likely our most valuable commodity: clean water suitable for human consumption.

So when you turn on the tap, know that most of what is spewing forth first fell to earth high in the Sierras, somewhere up near the beautiful Yosemite Valley. And know that we in Redwood City are fortunate to be on the receiving end of some of the purest, best-tasting water on earth.

14 thoughts on “A Watershed Moment”