Happy holidays! I’m amazed at how quickly this year is passing. I’m tempted to say that I can’t believe that it is almost Christmas, but that would be a lie: I’ve been out there doing Christmas-related shopping and shipping for the entire week and I can tell you that, based on the traffic and the crowds at our shopping centers and malls, Christmas is very near indeed. Whatever you celebrate this time of year, here’s hoping that it’s a peaceful and happy one for you and your loved ones.

The Internet is truly a mixed blessing, isn’t it? I of course use it to do a lot of my research, and for that it is often invaluable. But while I’m doing that research I occasionally find myself veering off onto tangents. Sometimes I end up spending a great deal of time reading about a topic that, although of interest to me, does not add anything of value to my article. Such was the case this week: I found myself chasing down the history of, among other things, the Mercury division of the Ford Motor Company. Fortunately, the prospect of a looming deadline gets me back on topic in the end.

Then again, the Internet isn’t my only distraction. On my walks doing research for an article, I often stumble upon new things that I can’t wait to share. For instance, I headed out to take an updated picture of the Hallmark House apartments (which I’ll get to in just a moment) and noticed that our Dairy Queen (on Woodside Road, near Hudson Street) has closed. Not being a regular patron of theirs I don’t know if they had provided any warning of their impending closure, but their sign is covered up and they’ve started stripping things out of the interior, so it appears that they are well and truly gone.

Another “stumble upon” occurred when I went to take a picture of the graffiti on the old Signarama location. This business moved a number of weeks ago from their very visible location on El Camino Real and Winklebleck Street (close to Broadway) to a small storefront buried within an easy-to-miss shopping plaza at 650 El Camino Real (between Hopkins and Brewster): 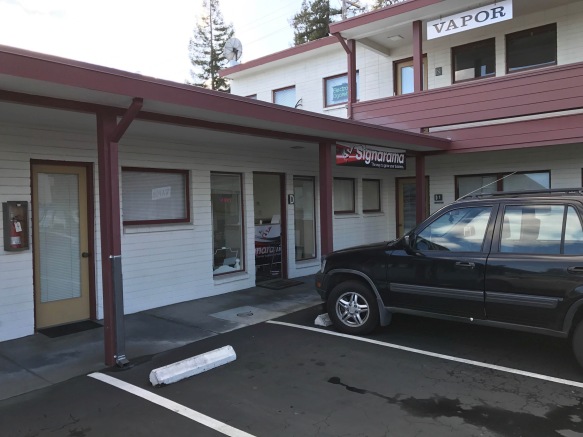 I suppose most people find them online and then visit in person, obviating the need for a location that is visible to passers-by. But in visiting their former location I was delighted to see a crew cleaning off the graffiti that had recently adorned the vacant site. Whether this is to make the space more attractive for potential tenants, or whether it is a sign that someone will be moving in, I’m just glad to see someone standing up to the local gangs.

Finally, while out and about I noticed that Sleep Train has indeed moved into the old Dress Barn space at Sequoia Station. That forced me to check out their location on El Camino Real down by Target; from the outside there are no visible signs that this older location is closing, so their Sequoia Station store may well be an addition to the chain, rather than a replacement for their older Redwood City location.

Enough with the small stuff. Onto some meatier subjects.

The disastrous July 2013 fire that essentially wiped out the Hallmark House Apartments on Woodside Road (near Hudson Street) removed a much-needed 72 units of low-income housing from the pool. For a time the building was undergoing reconstruction, but some two years ago all visible progress ceased and since then the building has been sitting, apparently untouched. As I reported back in February, the owner of the building had had to resolve a lengthy dispute with their insurance company before work could resume. But by February the dispute had been sorted out and the owner was working with the city to obtain the permits needed for construction to recommence. So I expected to see workers all over the building shortly after that. But as those of us who are regularly out on Woodside Road can attest, nothing has happened. What’s the holdup? I checked with the city and it seems that, because the building consists of affordable housing, the owner is waiting on their “tax credit financing.” According to a city staffer, the owner hopes to resume reconstruction in April 2017. In the meantime, they will be cleaning up the property somewhat and will be ensuring that the place is secure. So, unfortunately, it seems that this particular property will remain essentially as-is for another handful of months. Here’s hoping that they really are able to get going again soon; we badly need the low-income units that this building provides.

Switching gears, I finally watched the entirety of this year’s final City Council meeting. This epic five-hour-long meeting was a difficult one to watch: the bulk of the meeting was taken up with a hearing for the “final Docktown Plan,” and the stories and pleas from the Docktown residents—all of whom will have to move sometime next year assuming all goes as scheduled—were heartbreaking to witness. But for today I want to touch on the second major topic of the meeting, which was a hearing of an appeal to the Stanford in Redwood City project. This part of the meeting was not nearly as long—only about an hour and twenty minutes!—and consisted of a presentation by City staff, presentations by the appellant and representatives from the Stanford project, a public comment period in which ten individuals weighed in on the issue, and the requisite discussion and vote by the members of the Council. In contrast with the Docktown topic, in which the City Council expressed their great sympathy for the residents and their reluctance to have to vote for the plan (which they did, unanimously; they really seemed to be between a rock and a hard place on that one), the various Council members were much happier to deal with this topic. Not to support the appeal, mind you: quite the contrary, some expressed their disappointment that the appeal was ever brought to them. But it was clear from both their remarks and their demeanor that they are all solidly behind the Stanford in Redwood City project, and are looking forward to its completion.

Stanford’s Redwood City project is a major one for them, but by no means the only one in our immediate area. Although it is of a rather different nature, Menlo Park residents are close to seeing a Stanford construction project of their own.

Whereas our project will be an “administrative campus” that will be occupied by various Stanford University departments that are not directly involved with teaching (no classes will be conducted in the Stanford in Redwood City buildings), Stanford’s Menlo Park project appears more of a classic mixed-use development that will be leased to outside parties. Whomever ultimately occupies the three office buildings that will make up part of the project, I expect that Menlo Park residents will be cheering the fact that this 8.4-acre “Middle Plaza” development will replace three long-closed automobile dealerships, two of which have been deteriorating and generating no sales taxes for something like ten years now. 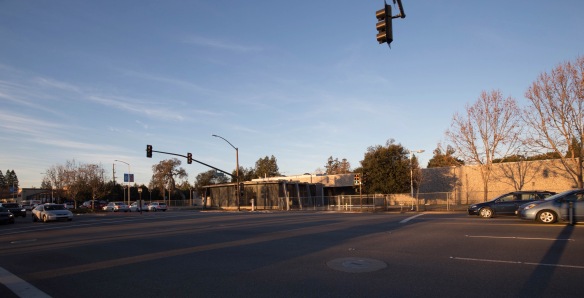 Long-time area residents may remember that back in 2005 Menlo Park had something of an “auto row” along El Camino Real. At the beginning of that year a driver heading south on El Camino would have encountered the following:

Of the four dealerships, three were adjacent to one another; those three are on property owned by Stanford, and all will be replaced by Stanford’s proposed project, which will consist of

The property is squeezed between El Camino Real on one side, and the Caltrain tracks on the other. To the north of the project area (to the left, in the following rendering) is the Menlo Station shopping center with its CVS drugstore and Big 5 Sporting Goods store, among others. To the south (to the right in the rendering) is the Stanford Park hotel.

As you can see, due to the configuration of the properties this project is a long, linear one. The office buildings will be located towards the ends of the project, with the apartment buildings taking up the center. One of the office buildings will be four stories in height; the other two (the ones at the very ends of the project) will be three stories. The residential buildings appear to be four stories of apartments on top of one above-ground parking level (and one below-ground parking level); they will reach 60 feet in height.

Stanford expects the project to go before the City of Menlo Park next spring. Assuming that it is approved, they expect the project to take about three years to build. Clearly they are patient people: they’ve been working on the designs for this project for a number of years. My understanding is that when Tesla’s lease came due, Stanford declined to renew it so that they wouldn’t have to evict any existing tenants when final approval is granted (I presume that Pace is operating under a month-to-month arrangement and is prepared to move at almost any time). Which is fine for Stanford, but has left residents of Menlo Park staring at three mostly empty auto dealerships behind chain link fencing. And it has left Menlo Park without the lucrative taxes that they had been collecting when the auto dealerships were in operation.

Stanford’s Menlo Park project has yet to be approved, but their Redwood City project has gotten the thumbs-up from both our Planning Commission and our City Council; it should get underway soon. In its meeting the City Council noted it was looking forward to working with Stanford both now and in the future. Redwood City’s reputation has been growing throughout the last several years, and I expect our association with the highly regarded Stanford University will further increase our “cred.” Which works for me!

This being the season of giving, please give some thought to helping out with, or donating to, one or more local charities. When thinking about different charities, consider helping fund the Magical Bridge playground. I wrote fairly extensively about this project in my post Of Parks and Parking, but basically it is a playground designed to accommodate children and adults of “varying physical and cognitive abilities.” The Magical Bridge Foundation estimates that the playground will cost some $3.3 million, and although a couple of large donations have gotten them a long way towards their goal—including $1.5 million from the city and $400,000 from the Sequoia Healthcare District—more money is still needed if this worthy project is to become a reality. The hope is to install it in Red Morton Park, replacing this small playground near Valota and the Army National Guard building with something larger, far more interesting, and, well, magical:

See the foundation’s website for more information and a link to make an easy, online donation.

11 thoughts on “Upping our Cred”