If you keep an eye on any of the local news sources, or if you follow the City’s posts via email or Twitter or some such, you’re probably well aware that the City Council, at their December 12 meeting, approved the “final Docktown Plan.” This plan aims to assist Docktown residents in relocating over the next twelve months and will ultimately bring an end to Docktown. I expect that I’ll write more about Docktown in the coming months, but for now I’ll simply direct those of you who want more information to the City’s press release and to this article in the Daily Journal written by four former Redwood City mayors. The Docktown saga has been a long and difficult one, and I wouldn’t be surprised if it isn’t over quite yet. We’ll see what the new year brings…

The last couple of months have been busy ones for me, to the point where I’ve been unable to attend as many Redwood City meetings in person as I would have liked. Thanks to video recordings I can easily catch up on meetings of the City Council and the Planning Commission, so I don’t concern myself too much when a scheduling conflict arises with one of those. But the City holds other meetings that aren’t recorded, meetings where in-person attendance is necessary since they are less about presenting information to us and more about obtaining information from us. These workshops are held on focused topics, and the most recent one—on the subject of the El Camino Real Corridor Plan—was of particular interest to me, given that I spend so much time walking up and down it. I rarely speak up at meetings, but I happily provide feedback at workshops like this. 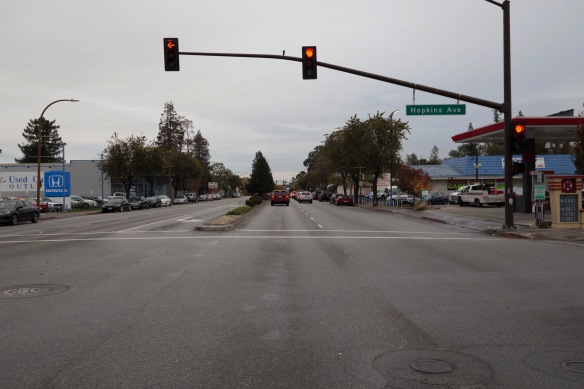 The El Camino Real Corridor Plan is intended to be the outcome of a lengthy process being managed by a ten-person Citizen’s Advisory Group. The plan will provide a comprehensive set of standards for development along (and adjacent to) El Camino Real between Redwood City’s northern and southern borders. It  will also lay out a design for the roadway and the streetscape with an eye towards encouraging walking, transit, bicycling, and economic development. The plan will go so far as to “provide a comprehensive business retention and development strategy, focusing on small businesses,” and will even “identify financing mechanisms and phasing recommendations to implement public improvements.”

So far the City has appointed the ten members of the Citizen’s Advisory Group (CAG), has engaged a team of consultants (Dyett & Bhatia) who have assessed the current conditions within the area of study, and has hosted a workshop to obtain public input. I made it a point to attend this workshop, and I’m glad I did: it turned out to be kind of fun. After a brief presentation, city staff and the consultants fielded a handful of questions before sending us out into the City Hall lobby where a series of stations had been set up. We were encouraged to visit each of the stations; each was looking for input on a different aspect of the project.

One station simply asked us to indicate how we use El Camino Real today. Another had us identify where we lived, and where we worked. A third had us specify how we would allot any community benefits monies (obtained from developers). On a large drawing of the study area, at another station we placed colored dots to indicate areas where we thought safety improvements should be made. And finally, perhaps the most fun station was one in which people got to redo the layout of El Camino Real: within the existing roadway and sidewalk width, we were asked to lay out traffic lanes, bike lanes, transit lanes, sidewalk widths, and a center median. The resulting designs were fascinating to see, reflecting as they did each individual’s priorities regarding traffic, mass transit, cyclists, and pedestrians. Constraining the designs to the available space between the existing buildings—which of course cannot be moved—really highlighted the challenges that the CAG and the consultants face.

The next meeting on this subject will be held on January 18 at 7 p.m. in the City Hall Council Chambers. In it the Citizen’s Advisory Group will discuss potential options for “development standards, land use policies, and design guidelines options to improve and enhance the Corridor.” While this will not be a workshop, it should nevertheless be an interesting discussion.

El Camino Real is a major thoroughfare, one that a lot of people seem to use in lieu of the freeway. When El Camino gets backed up, many people shift to major parallel through streets, such as Alameda de las Pulgas or even Hudson Street. I’ve been keeping an eye on Hudson lately; the City has been resurfacing parts of it, and recently they restriped the section from Jefferson Avenue to Hopkins Avenue. Normally such a project would be no big deal, but the way that the City has striped this section of Hudson is something I haven’t seen before, and something that isn’t immediately intuitive. Here’s a picture: if you were driving down the street, riding a bike along it, or parking on it, how do you think the various lines are meant to guide you?

If it isn’t immediately apparent from the picture, that lane between the curb and the solid line is a narrow one: note the cars parked further down the street.

Because I could only guess how this street is intended to be used, I checked in with the City to find out what their intentions are. I got a very lengthy response from staff member Jessica Manzi that cleared things up for me quite nicely. In it she noted that “with any new installation, especially an unusual one like this, it takes time for people to get used to the new conditions.” She also stated that Redwood City is putting together a flyer for area residents that will help explain the design. For those of us who live outside the immediate area and thus may not receive the flyer, however, I thought I should go over the new roadway layout here.

First off, one thing I had missed is the fact that along this section of Hudson (between Jefferson and Hopkins) cars are not allowed to park during the major commute hours: between 7 and 9 a.m. and between 4 and 6 p.m. These restrictions have apparently been place since 1965 and are not changing. What is changing how the street is used during those hours. As I understand it, during commute hours, when no cars should be parked along the street, the lane between the curb and the solid white line will serve as a bike lane. Drivers are free to use all of the space between the solid white line and the center line, essentially ignoring the dashed white line.

The City hopes that this new design will have a couple of outcomes. First, by taking away some of the traffic lane during commute hours and giving it to cyclists, the narrower driving lane will likely cause drivers to slow down, making things safer for everyone. And the dedicated cycling lane gives some added protection to cyclists—many of whom are children making their commute to one of the area’s schools. Secondly, during the non-commute hours the City hopes that the new striping will discourage people from parking on the curb, as the vehicle towards the left in the above picture is doing.

Prior to this project the only striping on this section of Hudson was the yellow center line, which left the issue of how much of the road was for drivers and how much was for parked cars up to the imagination. Hopefully, once everyone has learned the new rules, Hudson Street will be a safer and more organized place for all. 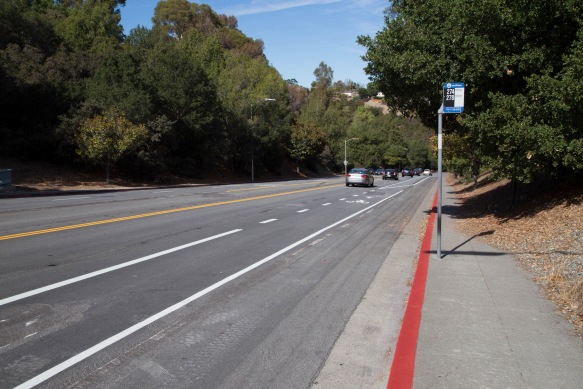 On the subject of roadway striping, this seems like a good time to point out that the grand experiment that is Farm Hill Boulevard is continuing. The pilot project was scheduled to end last month (with the current configuration being made permanent) and indeed at its October 5 meeting the Complete Streets Advisory Committee voted to recommend making the pilot permanent, albeit with minor tweaks to improve traffic operations and with the caveat that the City would continue to monitor the area and make any necessary adjustments. The City Council, with this recommendation in hand, then took up the discussion at their November 7 meeting. They heard passionate comments, both pro and con,  from the public. Based on those comments it does appear that the project may have adversely affected some surrounding streets, including McGarvey and Fernside, something that the Council appeared to have heard loud and clear. After hearing comments the Council discussed the issue. They then voted to continue the pilot for another 10-12 months, countering recommendations from both city staff and the Complete Streets Advisory Committee. They also directed city staff to work with the Complete Streets Advisory Committee to:

So, for the next year or so at least, expect Farm Hill Boulevard and the section of Jefferson between Farm Hill and Alameda de las Pulgas to operate pretty much as they do today. While there will likely be some minor changes, I’m guessing that any changes that do occur will be primarily aimed at keeping people on this major commute corridor and off the smaller residential streets that surround it. Late next year the Council will again hear from the Complete Streets folks and city staff, and will again consider what to do with this vital traffic artery.

At the moment Redwood City is experiencing so much development activity that it can be easy to forget that we also need to work on our roads. Regardless of whether the high levels of traffic are due to new residents and new places of business within our borders, or are simply the result of our booming economy, we need to address the heavy volumes of traffic our roads are seeing these days. While I suspect that we could use a few more such projects, efforts to deal with the immediate problems along Hudson and Farm Hill are a good start. And planning for the long-term, as is being done along our section of El Camino Real, is a wise move. Restriping can only go so far; major thoroughfares such as El Camino Real need to be completely rethought to remain viable in the future.

10 thoughts on “Hitting the Streets”