When you are a parent there is a time when your kids look up to you, thinking that you know almost everything. Until your kids learn how the world really works, sometimes you can anticipate their thoughts and make them think that you are omniscient. Eventually they wise up, however, and the fun (for the parent) stops. Me, I milked this period for all it was worth. Even to this day I tease my (now adult) children, claiming to know more than I actually do. They of course know better and tease me right back.

Having written more than 130 blog posts on the subject of Redwood City, some might consider me an expert. While I likely know more than the average citizen about the city, by no means do I know everything. Seemingly every time I take a walk I or watch a meeting I’m reminded of this fact. This week was no different: during a Planning Commission meeting someone casually mentioned something that I had been completely unaware of, prompting a site visit and a lengthy investigation. And while out walking this week I came across a sign that let me know of a fun local activity that ran for six months—an activity that I completely missed. So even I miss some things, often to my regret.

For proof that I do catch many things related to Redwood City, no matter how small, there’s this: I regularly read a dozen or so different newspaper comic strips, including one named for its title character, Luann. I find it interesting because, unlike with many, the characters age and go through the different stages of life. A while back Luann’s comic-strip brother got engaged, and this week he’s getting married. Leading up to the wedding the strip’s author and a fan site held a contest to have readers design the bride’s wedding dress. And believe it or not, the winning design was submitted by one Philip Gust of Redwood City! See the winning entry at http://luannfan.com/contest-voting/, or simply check out any of the Luann comic strips from this week, beginning with December 4, 2016.

I’m pretty proud of that somewhat obscure catch, but of course I began by admitting that I do miss some things. This week the second item on the Planning Commission agenda was a proposed classroom building to be constructed on public land in Sandpiper Park (in Redwood Shores). While a member of the public was speaking they casually mentioned something I had completely missed: the Sofitel Hotel has a new name! It seems that sometime over the last year the name of this 421-room luxury hotel was changed to Pullman San Francisco Bay Hotel. I did some digging and learned that although ownership of the hotel changed in late 2015, it appears that the company that manages it—Accor Hotels Group—has not. Accor Hotels Group consists of a number of hotel chains, including Sofitel, Pullman, and the recently acquired Fairmont hotels. So this renaming simply signifies a shift from one Accor sub-brand to another. But now I’ll need to get in the habit of referring to the former Sofitel as the Pullman Hotel…

The second thing I missed—something I really regret not having discovered sooner—I found while out walking. On Monday I took a long walk over to Woodside Plaza and then down to Hudson Street. It was there, in the park next to the YMCA’s current location, that I nearly walked right by this sign affixed to Palm Park’s fence: 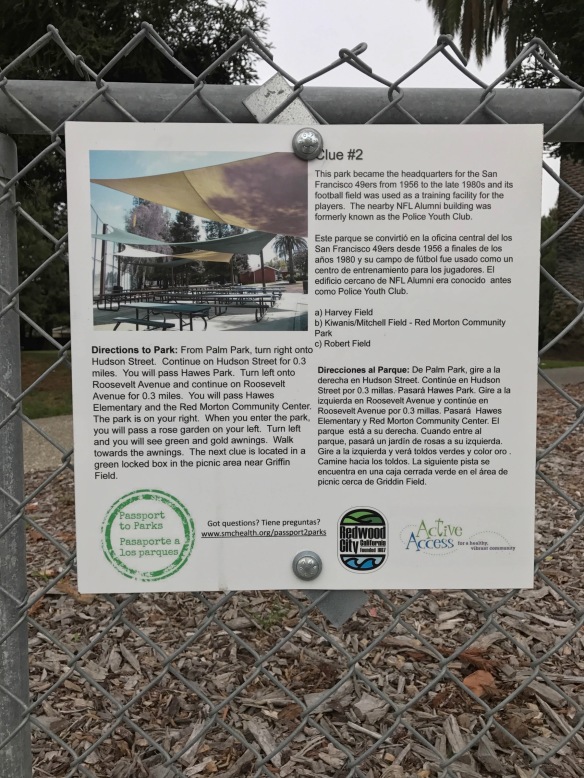 I don’t often walk back via Hudson—I usually go all the way to El Camino Real—but by the time I got to Woodside and Hudson it was getting late and I wanted to get home before dark. Hudson is shorter for me, and since I hadn’t walked along it in a while I made the turn. I passed the YMCA, and then the park, but turned around to take a closer look at the above sign. By itself the sign is a tad cryptic, but I guessed it was part of a scavenger hunt-type activity. After following the URL on the sign I learned that I was basically right: this was part of a county-wide effort to better acquaint people with their local parks (and provide some exercise). The activity has you solving puzzles and visiting three separate parks. The first puzzle is on the website; when you solve it you go to the indicated park and find the sign (like the above) with the puzzle leading to the next park.

The signs are still up, as is the website, but the opportunity to win a prize for completing the challenge expired last September. At least we can still enjoy the (not too difficult) puzzles and the parks to which they take us.

Although I wish I’d known about the parks challenge while it was going on, I’m glad I found out about it. And I’m glad that I took the walk I did; it gave me an opportunity to check in on some things. For instance, walking down Woodside Road I made a short detour down Kentfield Avenue to see how La Palma was coming along. I was just in time, it seems. The project is nearly done, and six of the twelve single-family homes in the development have already been sold. When I was there one of the homes was for sale; the remaining five were being finished and readied for listing.

Although I haven’t had the chance to go into one of these two-story homes, I like how they look from the outside. The insides look nice, too, based on the pictures on their website. Given that they seem to be selling almost as quickly as they are listed, people must think that their approximately $1.4 million asking prices are appropriate.

Incidentally, while on the subject of small single-family home developments, I just got an update on the Classics at Centennial Place development (on Brewster, between Warren and Allerton). This eighteen-unit project wrapped up some months ago, and fourteen of the eighteen homes have been sold. The remaining four range in price from roughly $1.15 million to $1.36 million. I had a chance to tour some of the units, and while they are nicely done and are well-located—just blocks from Redwood City’s downtown—residents should be prepared for a lot of stairs. Each unit is a free-standing three-story building perched on top of the subterranean garage. Thus, from your car to the master bedroom (on the top floor, naturally) you go up three sets of stairs. There is little common area and almost no amenities (no pool or gym, for instance), but if that fits with your lifestyle and you don’t mind stairs, these homes are definitely worth checking out.

Getting back to my walk, as I passed the newly rebuilt apartments at 926 Woodside Road I was delighted to see that they have leased out their small ground-floor small retail space. The tenant is MVCode Clubs, a place where kids can learn to program and build robots. MVCode Clubs offer coding camps (both in summer and during the school year), plus they work with schools to offer both after-school and in-school programs. 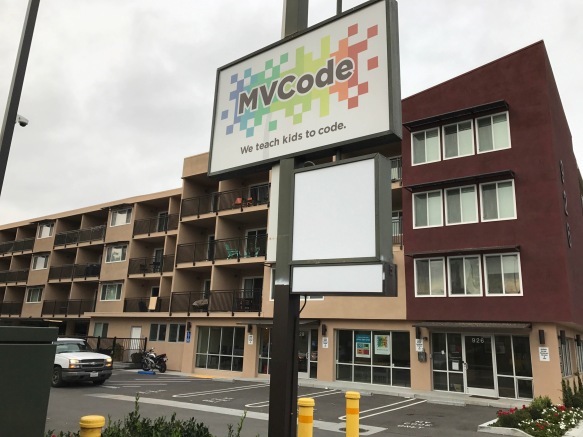 Continuing down Woodside Road, I was saddened to see that Milagros de Mexico is gone. Milagros de Mexico, which used to be located in the small shopping center at 730 Woodside Road, sells health and wellness products to the Latino community. I never went inside, but the store looked quite nice. I’m not sure why this one had to close, but I’m somewhat consoled by the fact that they still have a presence in the Redwood City area: they have an older store at 3147 Middlefield Road. They also have stores in Oakland, San Jose, San Francisco, and Hayward.

I took a separate walk around San Carlos to check up on a few downtown projects, and was both delighted and saddened to see that demolition for the Wheeler Plaza project has begun. Delighted because I love to watch heavy machinery, and saddened because they started with the old Foodville store. From Laurel you couldn’t really tell what was going on, but I wandered around to the parking lot where the view was quite different:

I took the above picture on Tuesday; I need to go back and see what has transpired since then. The buildings along San Carlos Avenue that are slated to come down were surrounded by construction fencing; perhaps they’re being demolished. If not yet, they will be soon.

Before I close, allow me to circle back to this week’s Planning Commission meeting. The meeting had two main topics, one of which I already mentioned. The other was aimed at defining the scope of the EIR (Environmental Impact Report) to be done for the proposed Veterans Memorial Senior Center/YMCA project. I was interested to hear the public comments on this item, which were decidedly mixed. Although there isn’t a concrete design for the project yet—indeed, an architect has yet to be chosen—for the purposes of determining impacts the city has put forth its “worst case” plan for the center. Then, if the impacts are minimal or can be satisfactorily mitigated, a project of that magnitude or smaller won’t require a new EIR. That “worst case,” though, is fairly large; it would expand the square footage of the buildings on the Madison Avenue side of Red Morton Park from their existing 88,000 square feet (total) to more like 120,000 square feet and would add a parking structure to hold roughly 260 cars. Most this extra square footage would be due to the addition of the YMCA to the campus: the project would be done in conjunction with the Y, which is currently located on Hudson Street but is looking to move. At this time the city is looking for input on which areas should be covered by the EIR (noise, traffic, light pollution, etc.); if you have suggestions get them in by Friday, December 16. See the Notice of Preparation on the city’s website for background information and instructions on submitting comments.

As much as I’d love to be an all-knowing authority on everything—or, on Redwood City, at least—I’m actually quite happy to settle for what I actually am: someone who knows a bit more than average about Redwood City, and who knows where to look for information on most of what I don’t already know. True know-it-alls are actually somewhat annoying to be around, anyway. Fortunately I have yet to hear from my children that I’m annoying. I wonder if they’ve caught on to the fact that I don’t really know everything?

The December 12 City Council meeting will cover two very important topics: the Docktown Plan and an appeal of the Stanford in Redwood City project. Due to the large number of speakers expected during the public comment period, the meeting will start 30 minutes earlier than usual: at 6:30 p.m. on Monday, December 12 in the City Hall Council Chambers. Interested residents may want to attend, or at least watch the proceedings live online at http://www.redwoodcity.org/city-hall/city-council/city-council-meetings-agendas-and-minutes.