Not too long ago many of us were eagerly looking forward to the sight of a rare supermoon rising over Redwood City. On the evening of November 14, 2016, I made it a point to be outside my house with my camera, eyes glued to the horizon in anticipation of this infrequent cosmic event. Honestly, though, what I saw was less than impressive. The moon that night was nice, to be sure, but it didn’t look particularly super to me. And not having done much astrophotography, it proved difficult to capture; I’ll need to work on my camera technique in advance of the next one. From my front porch, by the time it cleared the neighboring houses and trees perhaps it had lost whatever makes a supermoon special, so next time—and according to Wikipedia the next one will be on December 14 of this year—I’ll try to position myself so that I can see the moon much lower on the horizon, perhaps juxtaposed with a building or bridge that will show it to its best effect.

While many of us were eagerly waiting for the moon that night, I suspect that not so many were out by the Bay that morning to witness another fascinating natural phenomenon, one that has a much greater capacity to impact our lives here in Redwood City: a king tide. Because I was unable to witness the last couple of king tides in person, I made a special effort to see this one. As you can see from the above photo of the Seaport Conference Center (which, old timers will remember, used to be a Charley Brown’s restaurant), it was a foggy morning which made for some great pictures. From the picture it’s hard to tell how high the water is, but the fact that the pier is horizontal—it usually angles downwards quite a bit towards the surface of the water—is one giveaway.

I moved around quite a bit that morning taking pictures and trying to see how the extremely high tide affects those parts of Redwood City that border on the Bay or on one of Redwood City’s creeks. This next picture shows the bridge that spans Redwood Creek and connects Main Street to the Toys ‘R Us end of the Kohl’s Plaza shopping center; it gives a pretty good impression of how high the creek is: 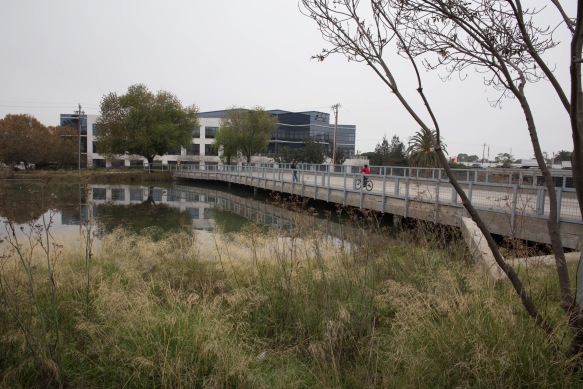 Normally you can kayak under that bridge. Not during a king tide, though!

Just east of this bridge, the creek dives under Highway 101. Where it does, the city has a project on the books to build a pedestrian undercrossing that will allow people to easily walk or bike between the east and west sides of the freeway. This will be a huge boon to the residents of One Marina and the other communities on the east side; giving them a safe and easy way to walk to our thriving downtown will make their lives much easier. As I learned back when I started walking around the city, their only options now are neither safe nor easy. Currently, driving is their only option. This new path—which, incidentally, will be paid for largely from funds supplied by the developer of the One Marina project—will be great…except during a king tide. When the water gets this high, the path will likely be under water. For times like this, when the water is so high that the undercrossing will be impassable, the city plans to close gates on either side of the path to prevent people from attempting the crossing.

The following picture, taken from the bridge featured in the previous one, shows where Redwood Creek makes its way under the freeway. The undercrossing will be built just to the left of the creek (if you look closely, you can see an orange shopping cart and what appears to be part of a couch; that is where the undercrossing will go). As you can probably tell, there is very little headroom there when the tide is this high.

Having finally witnessed a king tide, just this week I was able to check another item off my list of things to see in Redwood City: up until now for various reasons I’ve been unable to watch a tower crane being erected at one of our downtown construction sites. I was expecting the crane for the 601 Marshall Street project to go up last week or the week before, but for whatever reason it was delayed until Monday of this week. Fortunately, I was downtown that morning and spent a good amount of time on top of the Marshall Street parking garage watching the construction of the crane’s tower. It was fascinating to watch the carefully choreographed operation in which, as one section of the crane was being lifted into position by a large truck-mounted crane parked on a blocked-off Middlefield Road, the truck that had delivered that section pulled out and another carrying the next section moved into place. As men rigged this new section for lifting, the section dangling from the truck-mounted crane was swinging into position, where it was bolted in place by a handful of workmen. Once the section was secured, the workmen then climbed to the top of that section to await the next one.

As you can see from the above picture, three truck-mounted cranes were on site that day. The tallest was performing the actual work of lifting the tower crane sections into place, while the smaller one to its left assisted in the process of unloading the sections from the flatbed trucks on which they were delivered (in the picture you can just see the next section lying on its side on a flatbed truck just to the left of this smaller crane). The crane in the foreground parked along Jefferson Avenue, meanwhile, was not involved in the assembly of the tower crane. It appeared to be transferring construction materials from the street level to the bottom of the job site, which will eventually be the bottommost floor of the project’s subterranean parking garage.

On the subject of parking garages, in last week’s post I mentioned that I was investigating a few things down in the vicinity of the intersection of Charter Street and Bay Road, and that I’d report on them in this week’s post. What I was doing down there, among other things, was checking on the progress of the two projects on which Stanford is currently underway.

You’ve probably all heard of the Stanford in Redwood City project, and if you’ve been reading this blog for a while you may remember my post There’s Always Canãda in which I spent some time discussing Stanford’s plans for the majority of the former Mid-Point Technology Park, which occupies the block bordered by Broadway, Douglas Avenue, Bay Road, and Second Avenue. This project was approved by the Planning Commission on October 4, but that approval has been appealed. Thus, it will need to await resolution of the appeal before proceeding. In the mean time, though, Stanford has erected construction fencing around the property: 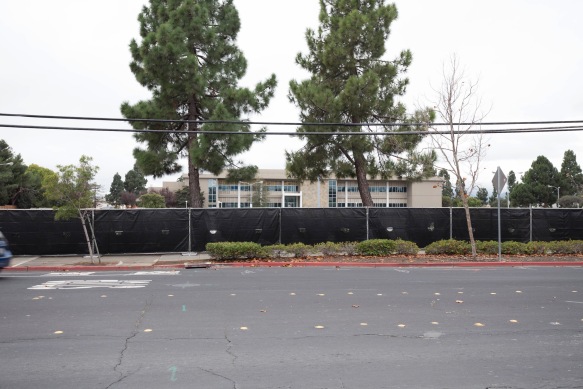 Stanford plans to construct an administrative campus on the property. It would not have teaching on-site, but instead would be a set of offices for use by support departments such as business affairs, human resources and property management. Stanford’s plan is to build the campus in phases over a period of years; they hope to complete the first phase sometime in 2019. Ultimately Stanford plans to demolish eight existing buildings on the property and replace them with a total of thirteen new buildings. As well, the project would include 2.4 acres of open space that would be accessible to the public. Once complete, the full campus is designed to support some 2,500 employees, which would make Stanford Redwood City’s third largest employer.

As you drive down Broadway coming from downtown Redwood City, the Stanford in Redwood City project is on your right. On the left is a second Stanford project that, unlike the Stanford in Redwood City project, is well underway. Here Stanford is remodeling one of the four buildings that make up the existing Stanford University Medicine Outpatient Center: the building closest to Second Avenue, at 420 Broadway. On the city’s website the project is described as “exterior improvements for Pavilion D” (Pavilion D is the building at 420 Broadway), and the plans do indeed show a number of exterior changes. While I was on site, however, it appeared that the building has been emptied out and is having its interior reconfigured:

Modifications to this building are actually not the largest part of this project, however. Wander around to the backside of the property, as I did, and you’ll see the main reason for construction on this site: 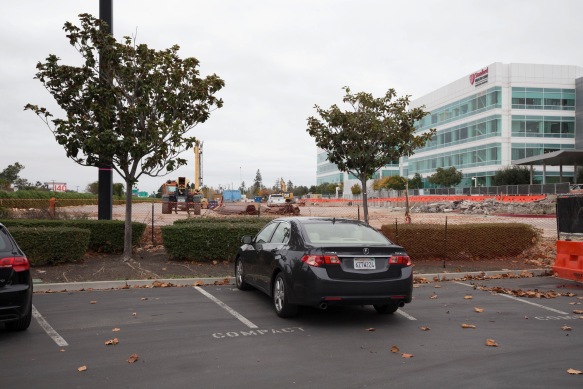 Between the healthcare complex and Highway 101 (on the left, in the above photo) crews are in the throes of constructing a 216,000-square-foot, four-level (one underground, three above-ground) parking garage designed to accommodate 565 cars. Since this new garage is replacing a portion of the complex’s existing surface parking lot that provided some 297 spaces, the garage will result in a net addition of 268 parking spaces and will bring the medical center’s total up to just under 1,400 spaces.

I have yet to set foot in this particular medical center, although I recently was referred to a doctor that practices there so soon I will be able to experience the place first-hand. My appointment is routine, but I’m actually somewhat excited about going in and seeing Stanford’s Redwood City operation in person. While I could of course just step inside and observe the public spaces, I figure that seeing it as a patient is better; as much as possible I try to experience buildings as intended, rather than as an outside observer.

It never ceases to amaze me just how much there is going on in Redwood City. If you, like me, enjoy watching construction there continues to be no end of projects to sit and watch. Of course, finding a good vantage spot to watch some of these projects can be difficult: the 601 Marshall Street project is one of the rare ones where there is a spot with a clear line-of-sight from which an observer can safely watch most of the goings-on. Other projects, such as the Stanford in Redwood City project, are trickier since the construction fencing makes ground-level viewing difficult and there are few (or no) publicly accessible high-rise buildings nearby from which one can look over the fencing. I will persist, however, and continue to hone my techniques for watching both the transformation of Redwood City and the so-called supermoon. And naturally I’ll continue to keep you up-to-date on what I see.

7 thoughts on “The King of Tides”