This week I took a nice long walk to a part of town that I hadn’t been to in a while: the area around the intersection of Charter Street and Bay Road, which lies between Hoover School and the Stanford in Redwood City project. I had a couple of reasons to head down that way, one being that in that area the city’s border gets really crazy, and I hoped that by going there I might figure out why.

I walk through downtown and write about it fairly regularly, but I don’t get down to “lower Broadway” nearly as often. That fact was brought home when, along the way, I noticed several new businesses on Broadway between Maple and Chestnut. I occasionally head to that part of Broadway to patronize one of the many businesses there, but honestly very few hold my interest. Indeed, I can only think of three that I visit:

On my walk this week, though, I found three additional businesses that may be worth checking out. First, Taza Deli & Cafe at 1796 Broadway: 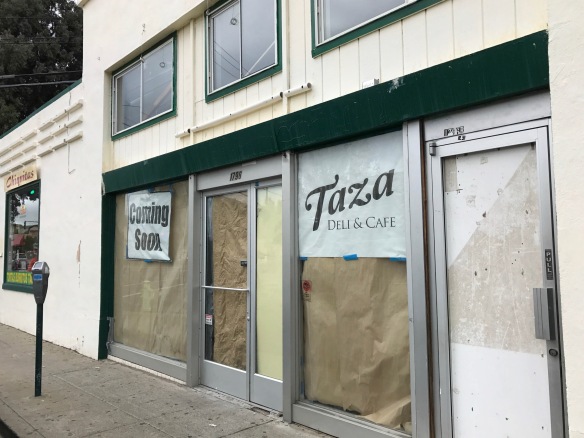 As you can see they are “coming soon.” They have a small presence on Facebook at the moment which reveals little beyond the fact that they’ll serve “oven toasted subs, coffee and Gelato.” I like submarine sandwiches, and I like Gelato, so once they open I’ll certainly give them a try.

Just a few doors down Broadway is the next new business: Decorating Den Interiors, a provider of in-home decorating services. I need to go back to talk to them about their business model, and to find out just who is running this particular franchise. While I’m not sure I have a need for their services at this time, with so many new apartments being built around here they’ve likely come to the right place. You’ll find them at 1780 Broadway.

Lastly, just beyond La Viga, at 1766 Broadway, is Redwood Barber Co. I have a regular place where I get my hair done, and this isn’t it—but the 19 reviews on Yelp give this place a five-star rating (and the reviews themselves are positively glowing) so I may just have to give them a try. I certainly like the look of the place: 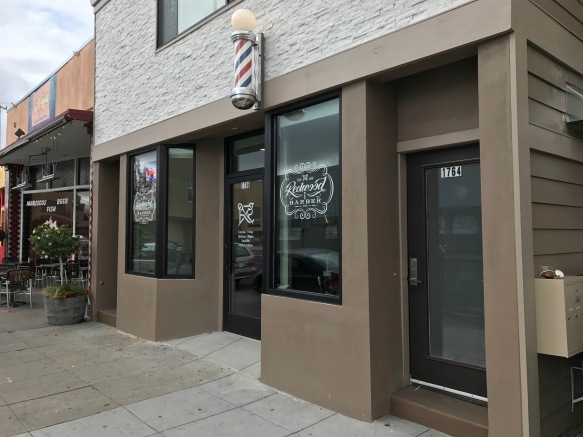 Redwood Barber Co. has apparently been in this location since June; I don’t know how I’ve missed them. In any case, if you or your kids are male, and you, like me, lean towards supporting small independent businesses, give this one a look-see.

Walking down Broadway I can’t help but wander through the shopping center at the corner of Broadway and Woodside: the one with the Big Lots, Foods Co. and CVS Pharmacy. I’ve shopped here in the past, but not at any of those businesses. Instead, when I’ve headed to this center it was because I was either going to OfficeMax or to Radio Shack. Unfortunately, as I discovered this week, both of those businesses have vacated the premises. Back in 2013 OfficeMax and Office Depot merged, and it seems that our area cannot now support two stores. Thus, the company has closed the Redwood City OfficeMax and is directing customers to the Office Depot on Industrial Road in San Carlos. Radio Shack, too, cannot seem to sustain two stores within little ol’ Redwood City: they’ve closed this one and are directing customers to their Woodside Plaza location. For now, both storefronts sit empty; I’ll keep an eye on them to see if the shopping center’s owner can fill those spots. However, The Sobrato Organization has proposed a project for this property that would replace this center with a blend of housing (400 multi-family residential units), some 420,000 square feet of office space, and a small amount of retail that will largely consist of a new CVS drugstore. (The Denny’s and the Jack in the Box restaurants would not be touched; they lie outside the bounds of the proposed project.) I’m thinking that how aggressively they pursue new lessees will reflect Sobrato’s degree of confidence around getting this project approved.

As I said earlier, one of my principal targets for this walk was the intersection of Charter Street and Bay Road: there is a lot going on there that I wanted to investigate. First of all, I had heard that there was a new veterinary clinic on this corner, and indeed there is: 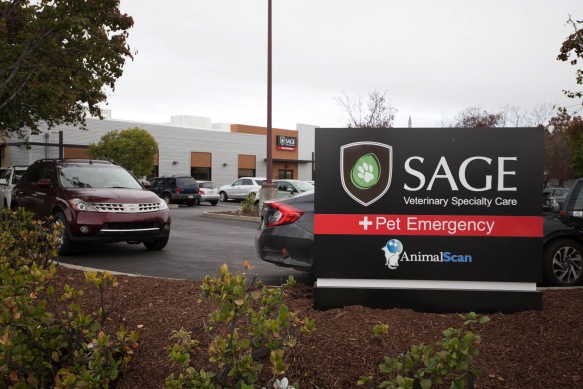 For those of us who have pets, this seems to be a really good find. SAGE is a 24-hour emergency veterinary clinic who also provides a number of specialty services. Among other things they specialize in cardiology, oncology and neurology, plus alternative medicine in state-of-the-art facilities. I have yet to go inside—I understand that they give tours—but based on the building’s exterior, this appears to be a top-notch veterinary facility. If you or someone you know has need of their services, do check out their website at http://sageredwoodcity.com, or pay them a visit at 934 Charter Street.

Kitty-corner from SAGE, at 2300 Bay Road, you’ll find Pita Hub. This location formerly was a Schlotzsky’s sandwich shop, but after a lengthy remodel—during which I watched and wondered what would finally emerge—we now have a new source for Mediterranean food. I have yet to try them but I will: I do love a good shawarma!

These new businesses aside, what really attracted me to this part of town is the city’s border. Rather than try to explain, allow me to show you what it looks like in this neck of the woods: 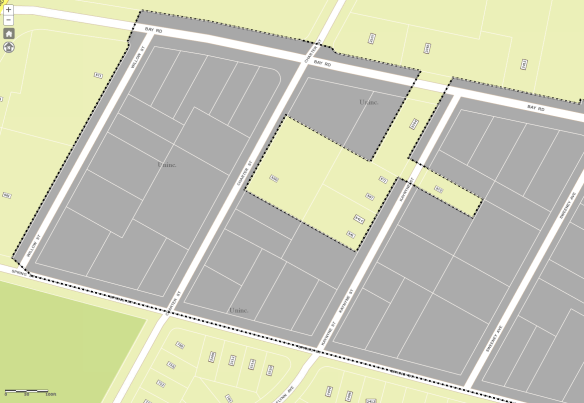 In this image, the dotted line represents the city limits. The parts in yellow (and green) are within Redwood City’s boundaries, while the bits in gray are in unincorporated San Mateo County. While I have to wonder why any of the properties on this map are not within the city limits—why the city surrounds this area on three sides and does not include these particular blocks—what really drives me nuts is wondering why the seven properties in the middle (which are identified by their street numbers) are within the city limits. Why those properties, and no others?

The intersection of Charter and Bay is at the top of the above image, in the center. The first yellow box above and to the right of this intersection (labeled 2307) is the parking lot in front of the SAGE veterinary clinic. As you can see, it lies within the city limits. Kitty-corner from SAGE, though, is the parcel where Pita Hub is located. Although the Postal Service has assigned them a Redwood City address, they are actually located just beyond the edge of the city: they’re on land controlled by the county.

Then there are the two parcels along and to the right of Charter Street below Bay Road. The first, as you can see, is gray, and is thus on county land. The second is in yellow (and is identified by the numbers “860”; this is the property at 860 Charter Street) and is thus part of Redwood City. When you actually go there, this is what you see: 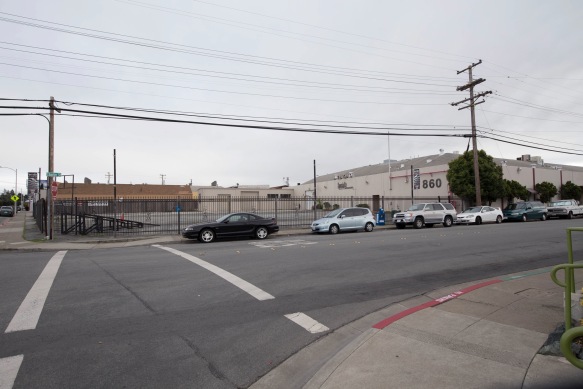 Together the building (with the prominent “860” on the side) and the lot used to house a classic car sales outfit. One day, assuming that they obtain the necessary approvals, these properties will be the home of Rocketship Charter School. Rocketship Education has proposed converting the building into classrooms and offices for a school that can serve up to 480 students in grades K-5, and plan to turn the open lot into a combination play area/driveway/parking area. Whereas the classroom building will be within the city, the playground will not. So as the kids go to and from recess, they’ll be walking back and forth across the city limits.

Something similar occurs with the one parcel on the right side of Kaynyne Street (labeled 872) that is within the city; it, along with the two gray parcels below it, together make up a “doggie day care” business named Planet Pooch: 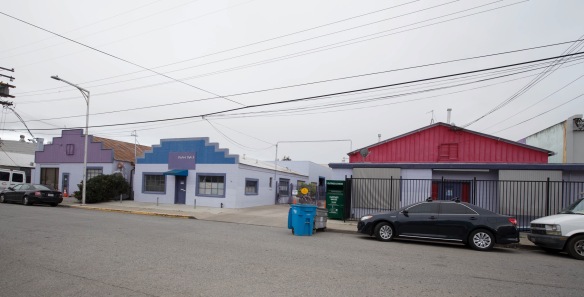 From the fences that span between the buildings it appears that the dogs can move between the three brightly colored buildings that make up the business. And when they do—at least, when they go between the blue building in the center and the purple building on the left—they, too, are stepping back and forth over the city limits.

The remaining buildings that sit within this puzzle-piece-shaped section of the city are either warehouses or light industrial buildings. One appears to be vacant, two appear to be the home of a landscaping business, and one large building spanning the remaining parcels is the home of Rebuilding Together Peninsula, a non-profit that provides “renovation and repair services for the Peninsula’s most vulnerable homeowners—seniors, veterans, persons with disabilities, and families with children and community facilities.” But I defy anyone to stand on Kaynyne Street and, without a map, point out which buildings are within the city and which lie outside its limits. Even I had a hard time, and I did have a map.

My walks often take me to the edges of the city, and almost never do I see a clear line of demarcation between Redwood City proper and its surrounding communities. When the border follows a road or a creek that’s one thing, but when it falls between individual properties within an otherwise cohesive block that’s another thing entirely. Presumably certain property owners saw an advantage to being part of the city, while other neighboring owners did not, but clearly I need to do more research to better understand those advantages. Perhaps then I’ll finally understand why our city limits have the shape that they do. Until then, however, I’ll keep exploring the very limits of our city, trying to make sense of it all.

1 thought on “Heading for the Border”