It is art that makes life, makes interest, makes importance, for our consideration and application of these things, and I know of no substitute whatever for the force and beauty of its process.

Beyond the obvious health benefits, perhaps the best thing about walking—as opposed to driving—are the little details that one notices. A lot of my walks are in the downtown area and along the El Camino corridor, and with repeated visits I notice more and more, particularly those smaller things that I would undoubtedly miss while driving by.

One such “detail” that I constantly pass by without noticing—until recently, at least—are the metal utility boxes that stand on many street corners throughout Redwood City. They contain such things as traffic signal controls, telephone switching equipment, and cable TV hookups. Regardless of their contents, however, they sit there, silently, doing their work and hoping not to draw attention to themselves. And they’re good at it: until you really start looking for them you just don’t realize how many there are. Like this one, at the corner where Broadway meets the Caltrain tracks:

Some time ago I noticed that someone had been painting the utility box in the downtown Bank of America parking lot (at the corner of Middlefield and Marshall). Then, on a later visit while out photographing buildings for my post Before and After, I actually saw the woman (who I later learned was Christine Oliver) painting the box. It occurred to me that I should talk to her, but she was talking to someone else at the time and I was focused on my current task, so I didn’t. When I thought about it later, however, I kicked myself for missing the opportunity to find out just what was going on. I had gotten some photographs of her work, at least, and on a later trip—after the mural had been completed—I took more, including this one:

A week or so later I took a trip downtown to, among other things, get some good pictures of our main library. As I neared the intersection where Main meets Middlefield, I noticed that yet another utility box was being painted—and that the artist was right there working on it. Not being one who makes the same mistake twice, I plucked up my courage and crossed over to where she was working. And I’m certainly glad I did! Meg Stephens—the artist for this particular piece—was happy to chat about what she was up to. She also granted me permission to take her picture as she worked:

I learned from her that our Civic Cultural Commission, along with ARTS RWC and the Redwood City Parks and Arts Foundation, created the Utility Box Mural Program to spruce up some of the bland (and in some cases, downright ugly) utility boxes that sit on various street corners around Redwood City. It seems that in early 2014 the Commission issued a “Call for Artists” to find three artists who would participate in a pilot program to paint three of these boxes. Then, assuming that the necessary funding can be secured (and, presumably, assuming that the three boxes that made up the pilot are well received), additional artists will descend upon boxes throughout the city. A total of ten candidate boxes have been identified so far: eight in Redwood City proper (including the three that have already been done) and two in Redwood Shores.

Oh—and that third box that is part of the pilot? You’ve probably seen it since it sits on the corner of Whipple and Veterans, right before the onramp to 101 southbound:

This one does not appear to be complete as yet, and is as different from the first two as they are from each other. I’d love to know more about it: it has a blend of science, nature, and music that sets one to thinking, which it seems to me is the goal of good art.

The Utility Box Mural Program is just one way in which Redwood City is starting to promote public art. Back in 2013 the city created a Public Arts Master Plan to guide its creation. This plan is good as far as it goes, but it ends with four “next steps,” three (and a half, actually!) of which are concerned with funding future art projects. And from what I can tell, funding has been and continues to be the biggest stumbling block to getting more public art in Redwood City. Whereas other cities have thriving programs—Palo Alto’s “Art in Public Places” program, for instance, claims that they have 326 such artworks around their city—it seems as if we can count the number of “art works in public places” on the fingers of one hand. Let’s see. There are three utility box murals, a metal sculpture in front of the Redwood City police station (The Guardian), and…a bird bath?!?

Yes, a bird bath. It seems that even when there is adequate funding we have problems getting art into place. While exploring the Public Art section of the Civic Cultural Commission’s website, I was drawn to the link for the G.R. Cress Bird Bath project. This project, which was created when Redwood City resident Gene Cress passed away and left his entire estate to the city for this purpose, was funded to the tune of 1.3 million dollars. With one million for projects and the rest for maintenance, you would think that there would be no problem creating bird baths throughout the city, right? But after a 2007 call for artists resulted in the selection of four, for some reason none of them were ever installed. The following year a separate effort did result in the creation and installation of one such “bird bath” (it’s more of a fountain, really, although birds can drink from it and bathe in the basin at the top): the Ray of Light located on the north side of the Redwood Shores Library on Marine Parkway.

While the website for this project indicates that there may be others in various stages of development, it doesn’t seem that any of them have been installed as yet. The commission does appear willing to consider other proposals, however, so if you or someone you know is interested in creating public art at which a bird can drink and/or bathe, send your proposal to publicart@redwoodcity.org.

Other than for the bird bath project, it seems that we simply don’t have a reliable source of funding for public art, and thus you don’t see many statues and murals and such around Redwood City. There doesn’t appear to be any dedicated money in our city budget for public art, and we don’t yet seem to require (or even request) that developers create or at least fund art as part of their building projects. The utility box murals, for instance, have no identified source of funding and currently rely entirely on donations. Thus, unless people donate to the effort, the three we have today may be all we’re going to get. And while Redwood City’s proposed Community Benefits Program—which hopes to extract concessions from developers that will benefit the community at large—may end up generating some funds for public art, that program is still in development and will only apply to future development projects. The large projects that you currently see rising up in our downtown and elsewhere aren’t contributing a dime towards public art, as far as I can tell.

I should note that I’ve been talking about public art along the lines of murals and sculptures. To be fair, Redwood City does have art in the form of paintings and photographs which can be viewed by the public in places such as the main library and the Veterans Memorial Senior Center Building at Red Morton park (where you can see the city’s large collection of Ralph Ledesma paintings, for instance). Also, there are our summer concerts, which of course are public art in another form. Those, too, are funded by donations and need your help to survive.

You can donate to support public art by clicking the appropriate link on the Redwood City Parks and Arts Foundation website. Alternatively, you can use the Amazon affiliate link on that same website to make purchases through Amazon, after which Amazon will donate a percentage of your purchase to the foundation. The Parks and Arts Foundation is the one who accepts donations to support our summer concert series (both downtown and in our parks); again, see their website if you’d like to contribute. Finally, the more passionate among us may want to get involved with a local arts organization such as Arts RWC, a community organization whose goal is to promote Redwood City as a destination for the arts.

On a related topic, for those of you who are interested in creating art, there is the Redwood City Art Center, on Broadway across the street from City Pub: 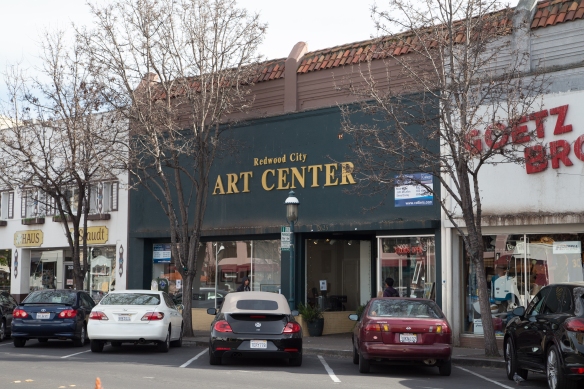 Notice anything? Did those two blue and white signs advertising “Office Space Available” catch your eye? Indeed, I regret to report that we are losing the Art Center; they’ve lost their lease. On the plus side they aren’t closing but are merely moving. On the minus side, they’re moving to San Carlos (to 1700 Industrial Road), which, while close by, is still a loss for Redwood City. And whether or not the storefront’s new tenant (or the building’s owner) covers up the large murals on the side and rear of the building, the one on the side will certainly be lost once the new building proposed for the parking lot behind Gourmet Haus Staudt goes up: 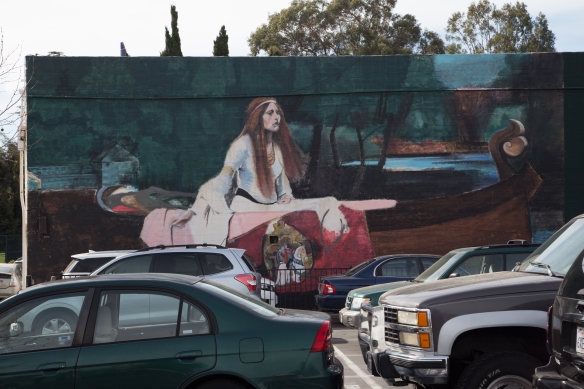 Public art is an important way in which a community can establish and make known its character. A city should be more than just a collection of buildings: the landscaping, amenities (benches and fountains) and public art go a long way towards making a city the kind of place where people want to spend their time. Redwood City has the landscaping and the benches, but now—particularly given the recent good news regarding the city’s budget—we can and should direct some of the city’s money towards the creation of public art throughout our city.

Walking Redwood City is now on Twitter! Followers of @walkingRWC will not only get notified when I post new articles to the site, they will also get occasional short observations from me as I walk around the city. No worries if you aren’t on Twitter, though—I will continue to announce my posts using the existing mechanisms as well.