In a comment to my post “It’s a Living“, reader “davethetallguy” noted that the small apartment building on the corner of Jefferson and Wilson had been boarded up. Because I hadn’t been by there recently, his comment got me thinking that it was time to check on the progress of a couple of ongoing projects around Redwood City. In between storms I managed to do just that, so I’m taking a brief break in my “How Low Can You Go” series to report on my findings. But before I start in on those, I should report on last week’s City Council meeting.

Redwood City’s City Council meets every other week, on Monday evenings. Their most recent meeting, on December 8, had a number of items that were of interest to me. First, there were three residential properties that had been proposed for Historic Landmark status (the City Council approved all three). I hadn’t given much though to landmarked homes in Redwood City before now, and this got me thinking that I should I dig up a list of them and then visit them. I’ve put this on my “to do” list and I’ll report my findings in a future post.

The second item of interest on the City Council meeting agenda regarded the YMCA. The Council approved a letter of intent between Redwood City and the YMCA in regards to a proposal that hopefully will result in the construction of an “intergenerational health, wellness, and recreational facility” at Red Morton Park. The details have yet to be worked out, but essentially the city and the YMCA intend to jointly build a new facility to replace the Veteran’s Memorial Senior Center (VMSC) at Red Morton. The YMCA will lease a portion of the facility and will move from its current location on Hudson (near Woodside Rd.) to this new facility. The City will retain control of the remainder of the facility, enabling it to continue providing programs for seniors, the disabled, veterans, and youth.

The third, and final item of interest on the City Council’s agenda involved an adjustment to the Maximum Allowable Development (MAD) limits spelled out in the Downtown Precise Plan, and was the primary reason I attended the meeting. I have written about these limits before: they control how much new development the plan allows within the downtown area in four categories: residential units, office space (square feet), retail space (square feet), and hotel rooms. The plan limits for each category were set back when the plan was originally written, but as development has progressed it is clear that the initial assumptions weren’t quite correct, and that there is more demand for some categories than for others. For instance, the plan originally limited new office space to 500,000 square feet. Projects currently under construction (including Crossing/900) plus those already approved total nearly 200,000 square feet. Additional office projects currently being proposed add up to much more than the remaining 300,000 square feet. Thus, as I concluded in Time for Some Commercials, either the original limit for office space needs to be increased or developers will have to be turned away. Turning them away would be fine, except that there has been much less demand for the other categories. For instance, of the 2,500 allowable new housing units in the downtown area, projects underway or approved add up to just under 1,400 units. As for retail, there has been little interest in net new retail space in Redwood City’s downtown (while some of the office and residential projects include do retail on their ground floors, that basically cancels out the retail that was lost when the buildings were constructed).

The city staff proposal to the Council was not to increase the overall new construction being allowed, but to simply allow for a shift between categories. Thus, the need for additional office space capacity could be made up by decreasing the allowable amount of new residential units and/or retail space. And the proposed ratios take into account traffic impact, so that decreasing new retail space in favor of increasing new office space shouldn’t adversely impact our (already not great) traffic situation. There were a number of residents on hand to speak out on this proposal; as you might guess most were against it, although there were one or two in favor of allowing the shift. And as I suspected going into the meeting, the City Council did indeed approve the MAD adjustments. So you can expect that some, if not all, of the downtown office projects I identified in Time for Some Commercials will indeed be built as proposed. The comments and the City Council’s discussion on the matter was fairly interesting. If you want to watch it for yourself, you can: go to the City Council Meetings page and click the “video” link for the Dec 8, 2014 meeting. Then, in the index on the left side of the window (below the video), scroll down to and click item 9B.

Enough on the City Council (for this post, at least!). I wanted to report on what I saw on my latest walk. First up, a project that I’ve been writing about since September of last year (first, in my post Broadway Bound): the 24-Hour Fitness is finally rising from the ground on Broadway, below Woodside (just past the main Redwood City post office). This project has been going on seemingly forever. I did a bit of digging and found permit filings from as far back as April 2013. Thus, in just four months—by which time this project will not yet be completed—it will have taken two full years to build a gym. As you can see, while the building will be by no means unattractive, it certainly doesn’t appear to be at all complex (and only the exterior walls are up as yet; currently there is neither a roof nor any interior walls):

Who knows what the holdup was? They do seem to be making good progress now, however, so someday soon this thing should be in operation.

Next up is a property I’ve been wondering about for a long, long time: 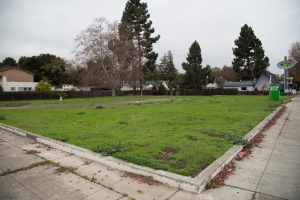 This is the vacant lot on El Camino Real between Mountain Mike’s (to the north) and the KFC (across Avondale Ave., to the south). This lot has been vacant for as long as I can remember—and in the city and county systems the property is indeed listed as “vacant”—although there are bits of concrete that indicate that the property might once have had a structure on it. As well, I found one indication that the property might be contaminated; perhaps there was a gas station here at one time? In any case, this lot has finally caught the interest of a developer, who is proposing to put twelve condos here. Given the size of the property—its not huge—the condos will apparently be packed together into a single structure. But the rendering that the developer has provided looks pretty nice:

Over in the downtown area, I’ve been wondering for a while now about Howie’s Artisan Pizza. If that doesn’t ring any bells, it is because it doesn’t exist yet. This is the name of the operation that will occupy the space that formerly housed Tarboosh. It is on Jefferson, across the street from the Century Theaters complex and adjacent to the little park by the Jefferson Post Office. Tarboosh has been gone for a couple of months now, and although the “Howie’s” sign was pasted up in the building’s windows shortly thereafter, there has been little sign of activity since then. 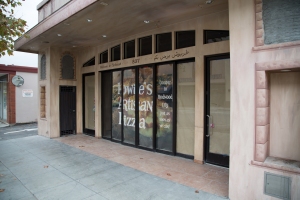 At least, there hadn’t been much activity until recently. On my walk this little addition caught my eye: 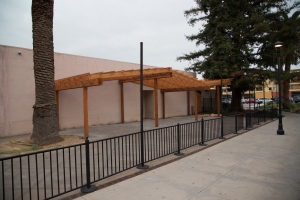 Howie’s will apparently have outdoor seating, which is always a good thing. After all, “Climate Best by Government Test,” right? Just to make sure I wasn’t crazy I checked the permits for this property and found some recent activity, so the project does appear to be progressing. Whether or not we need yet another pizza joint, I’m glad that this property won’t be empty for long.

On to 103 Wilson. This is the property about which “davethetallguy” commented, which caused me to take my walk and then write this post. Sitting on the corner of Wilson and Jefferson, kitty-corner from the Johnny Rockets—which has closed, incidentally!—this nondescript little apartment building is indeed boarded up. Here is the building’s main entrance:

The housing project that will occupy this property will consume more than just the little apartment building. It will also result in the demise of the little blue house next door (on Wilson):

In fact, the entire block will be razed and a seven-story 175-unit apartment building will be built on this site. I’ll write more on that when it gets underway, which likely won’t be until Elan Redwood City (the huge wooden thing looming over Redwood Trading Post) is complete; both projects are being built by the same developer. But I’ll wrap up this topic with a rendering of the building as it may appear when viewed from the corner of Jefferson and Middlefield (the Caltrain tracks are in the foreground of this rendering):

The last place I visited on my walk was a project that almost slipped under my radar. At 1410 Valota a developer has managed to squeeze five good-sized single-family homes onto a single deep lot that formerly contained just one 1,200 square foot home (two bedrooms, one bath!) You can see four of the five new homes in this picture I took as the sun was setting (click to enlarge):

Three of the five have already been sold, at least according to Zillow. The home in the front (on Valota) is still for sale, and is listed at $1,395,000. It is just over 2,000 square feet and has four bedrooms and 3½ bathrooms. The other house still for sale appears to be the second one in, with the stone facing on what I would guess is the living room. This house is slightly smaller—1,900 square feet, three bedrooms, 2½ bathrooms—yet the developer is asking the same price. Presumably this is due to the fact that this house doesn’t sit right on Valota, and is thus a bit more sheltered.

As the sun went down I walked home, thinking marveling at the number of projects underway throughout the city. They reflect the prosperity that the booming economy is bringing to a number of area residents, of course. But not all of us can afford to spend $1.4 million on a house (plus the $14,000 or so in annual property taxes). Maybe, just maybe, some of those 175 apartments that will be built at 103 Wilson will be set aside for lower-income folks. Let’s hope…

13 thoughts on “Time for a Checkup”