In my previous post, How Low Can You Go?, I began my examination of Redwood City’s housing situation by focusing on what it costs to live here. The information in that post came largely from the 2015-2023 Housing Element for the City of Redwood City [pdf], a lengthy document that presents a picture of housing at all levels in the city of Redwood City. Much of the Housing Element is focused on low-income housing; it not only outlines the issues around housing affordability, but also identifies “affordable” housing throughout the city. I found the list of assisted housing developments to be fascinating in both its length and its diversity, and made up my mind to visit each and every place on the list. In this post I’ll show you some of what I saw, giving you a brief tour of some of the options available to low-income households.

I have to admit that when I started looking into this I brought some preconceived notions to the table. I grew up in the city of Los Angeles, a place that seems to have clear divisions between the wealthier and poorer parts of town. Residing as I did within the boundaries of the L.A. Unified School District, until I left for college I attended the public schools that were assigned to my home address. Each morning I rode in one of a fleet of large yellow school buses to and from school, but it wasn’t until High School that I came to realize that those buses weren’t only servicing homes nearby. Indeed, many were transporting their charges clear across the city, a journey of as long as an hour each way. That’s when I came to realize how Los Angeles was divided, with different economic groups largely clustered in different parts of town.

Based upon my experience growing up, I had naively assumed that many or all of Redwood City’s affordable housing units would be grouped in the south and east sides of town, just as they appeared to be in L.A. Imagine my surprise, then, when I plotted out my walking tour and realized that affordable (also known as “assisted”) housing can be found in every part of Redwood City. The south-east corner of town? Check. Emerald Hills? Yep. Redwood Shores? Sure. Along Woodside Road? Uh huh. El Camino? Of course. How about near Sequoia Hospital, close to where I live? Yes indeed!

What I had thought might be one long walk turned out to be four, each heading in a different direction. And given that some of my targets were on the very edges of the city, these were long walks: the shortest was 8.5 miles, while the longest was more than 12. My self-imposed task of visiting each listed site meant that one day I walked all the way up to Canãda College, while the next found me standing on the edge of the bay, at the far end of Redwood Shores.

Not only were the locations diverse, but so were the types of units I found. For one thing, not all affordable housing is rental housing. Indeed, there are five separate “affordable ownership” developments that facilitate home ownership for those who qualify. A total of 65 townhouses and one single-family home (this a Habitat for Humanity project) have been built within the city. As for rentals, as you might expect there are many of them: the Housing Element identifies 680 units in seventeen apartment complexes (on page H-48). Finally, there are thirteen group homes and shared housing units containing a total of 87 beds. I should point out that all of these numbers are for housing units that existed at the time the report was written; I’ll address affordable housing in the buildings currently under construction in a future post.

One thing I was very pleased to discover, in addition to the diversity of locations, was the apparent quality of the assisted housing units themselves. I could only judge from their exterior appearance, of course, but in every case the units appeared to be in good shape and most were very attractive as well.

Two of the more well-known apartment complexes containing some affordable units face each other across El Camino Real.

Nearby, on Main behind the Ford dealership, is an inconspicuous little apartment building owned by the city of Redwood City: 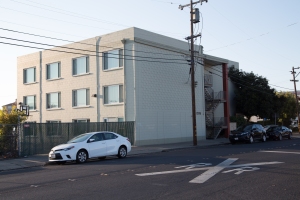 Want something new? Of the 132 apartments in the Township Apartments building, at 333 Main St. (behind the In ‘n Out Burger on Veterans), seventeen are designated as affordable: 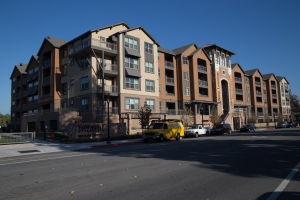 For the most part the affordable apartments listed in the Housing Element appear to be available to anyone with a demonstrated financial need. There are a couple that are further restricted, however. For instance, the 94 affordable apartments (out of a total of 134) in Veterans Blvd’s “Casa de Redwood” are for seniors:

The same restriction applies to each of the 58 apartment units that make up the Redwood City Commons complex on Walnut Street:

And then, for a different type of restriction, there is this place:

I’m guessing that most of you won’t recognize this one, since the above photo shows the front while its most visible face is its backside. This is the building that was constructed on the Canãda College campus a couple of years ago; the one that looms over Farm Hill Blvd. It was built to give Cãnada College faculty and teachers—who presumably earn less than your typical Silicon Valley worker—an affordable place to live. Located as it is near the top of Farm Hill Blvd., it has beautiful views. But if you want to see it, I would suggest either driving or taking the bus: I can tell you from personal experience that the walk up there from “the flats” is a very tough one…

Finally, I just have to mention the Hallmark House apartments. Not because they are restricted in any way, but, well, just look:

This is one of the apartments buildings on Woodside Road that burned in 2013 (on July 7, 2013, to be exact). This building is run by a non-profit: all 72 of the apartments in the building are affordable units. As you can see, it is still being reconstructed, and it appears that it won’t be habitable for some time. I wanted to highlight this one in particular simply because although these 72 apartments are included in the total cited in the Housing Element, they won’t be back online for some time yet.

That was just a sample of the seventeen Redwood City apartment complexes that contain affordable units. Apartments—even subsidized apartments—can still be too expensive for some, however. If that is the case, a more affordable option might be a bed in a shared or group home. But note that nine of the eleven shared or group homes in Redwood City are specifically for disabled adults (primarily, developmentally disabled), and the remaining two are for single-parent families. I visited all of the shared/group homes listed in the Housing Element (on page H-51, if you are interested) and noted that most are simply ordinary-looking homes at which you wouldn’t look twice. For instance, there is this five-bed home on Alameda de las Pulgas, just up the street from Sequoia Hospital:

Or, there is this attractive home on Hilton St., a six-bed shared house in the Stambaugh/Heller section of town:

Not all the shared houses and group homes are so anonymous, of course. If you’ve been to PCC, for instance, you may have seen this place:

On this site, in addition to the training center, are two group homes containing a total of 27 beds. Kainos declares their mission as follows: “provide a wide variety of residential, vocational and related services, with the highest quality training and support, to adults with developmental disabilities”. They operate not only this facility but a couple of others elsewhere in Redwood City; all are for folks with developmental disabilities, though.

If you are extremely lucky, you might be able to buy a townhouse or single-family home—but don’t hold your breath. There are only 65 condominiums and one single-family home (only one, in all of Redwood City!) that were constructed as affordable housing. Of these, the single-family home and 36 of the condominiums were Habitat for Humanity projects. This faith-based nonprofit does great work: the 36 condos they built over on Rolison Rd. (behind the sound barrier on the west side of 101, north of Marsh Rd.) are quite attractive: 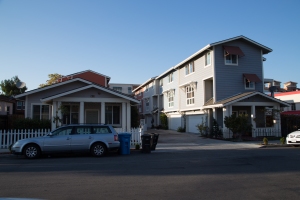 Or, if you have kids and would like to be near a park, there is “Wyndham Place”, which is on the west side of Warren St.; it sits kitty-corner from Mezes Park (and spans the block, with frontage along Whipple Ave.). From the maturity of the trees on the property, you can tell that this property has been around for a while (it was completed in 1994 or thereabouts):

Of course, if you could afford one of these places there would still need to be a willing seller. It does not appear that these properties come on the market very often. For instance, I found mention of one unit in Wyndham Place that came on the market in 2006, but nothing later than that (based on a very cursory search, I must admit).

Regardless of the assisted living situation—rental or ownership, or a bed in a shared house—Redwood City has no lack of variety in both location and style. What we do lack, unfortunately, is quantity. Even if you consider each bed in the shared housing and group homes as a “housing unit” (which might be reasonable, given that most such residents are probably single), Redwood City has a total of 833 assisted housing units (66 for-sale condos and homes, 680 apartments, and 87 beds in shared housing), not counting private in-law units (I don’t have numbers for those). But Redwood City has a total of 29,500 houses, apartments, and condominiums, meaning that only 2.8% of our housing throughout the city has some form of assistance to makes it more affordable to residents. And since almost half of Redwood City’s households fall into one of the “low” income categories (see my previous post), clearly this isn’t enough. Not nearly enough.

So what is the city doing? What can it do? That’ll be the subject of my next post in this series.