In August of 2012 I was laid off from Motorola (along with a few thousand others). Having worked in the tech industry for over 30 years, I decided it was finally time to try striking out on my own, writing mobile device software from my home in Redwood City. I also decided to use some of my new-found freedom to get some exercise.

I have never been a big fan of going to a gym. When you only have a limited amount of time—as I did when I was working in a corporate environment—sometimes that is your only option. And, of course, gym equipment can make it easier to develop and tone certain parts of your body. But the fees gyms charge, and the repetitive routine, are turn-offs for me. As is the guy on the next treadmill over who insists on cranking up the TV volume on a show I don’t care for…

I have always enjoyed walking, and given that I now had the time it was the natural choice when deciding how best to get in shape. Given my distaste for a regular routine, over the past year I have varied my walks, starting at home and heading in different directions and targeting different endpoints. Along the way I couldn’t help but observe my surroundings, paying particular attention to homes and commercial buildings under construction. I’ve always had a bit of an interest in buildings—likely due to my being raised by a father who was a commercial real estate developer and parents who loved to build and remodel houses—and so buildings and houses naturally catch my eye. Although I don’t like to have a set routine when I walk, I do find myself regularly going back to monitor the progress of various construction projects. This home, for instance, was one that interested me in particular, and caused me to return again and again as it was being constructed: 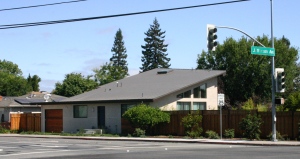 When I started my walks the house previously on this spot (at the corner of Alameda de las Pulgas and Jefferson) had been almost completely torn down—all except for the garage, which had been stripped to the studs. I was curious to know what would go up in its place. I think I was partly drawn by the location, which, frankly, is a pretty poor one for a house, given the number of cars that pass through this intersection each day. In any case, I watched the resulting construction with interest, and visited the site repeatedly. Unfortunately, I was unable to attend a preview when the home was put up for sale; I would have loved to see the inside for myself.

Another construction project that I followed with great interest—one which concluded only recently—was the rather drastic remodel of the old Movie Groove building, on the corner of Jefferson and El Camino. Although I and many of my friends were somewhat disappointed to see it turn into a “Vitamin Shoppe,” I do have to give them credit for doing a good job of revitalizing what was a pretty old, tired building. But while I was speculating about what they were doing to the building and who might eventually occupy it, I was also paying close attention to its next-door neighbor:

This curious little house had a construction fence in front of it all during the Vitamin Shoppe remodel, and a close look reveals that the back wall of the L-shaped “shoppe” actually touches the back of this little house. Thus, both buildings presumably have the same owner, and in fact they may be physically connected. The house appears to be unoccupied, and indeed it was inaccessible during the Vitamin Shoppe construction. I cannot help but wonder why it still stands: why didn’t they tear it down and either use the site for additional parking or expand the commercial building into this space? This is a mystery that I still aim to get to the bottom of.

Finally, one of my other regular targets for my walks was a construction project of a different kind. Over the years I had noticed bits and pieces of the Hetch Hetchy aqueduct throughout Redwood City, but I had never before noticed just how they all connect, and how the aqueduct tunnel carves an almost perfectly straight line through Redwood City. Coming across it on one of my walks, I determined to trace it as best I could, at least from where it crosses El Camino (running through the old Mel’s Bowl parking lot) to where it crosses Edgewood. It was too much to follow it all in a single walk, but over time I explored various segments, ultimately locating every visible segment. The recent retrofit of the aqueduct tunnel, being done to ensure the system’s integrity in the event of an earthquake anywhere along the line, made some sections particularly visible. Other sections proved a bit trickier to find, but once I realized just how straight the tunnel runs, and how no buildings can be constructed on its right-of-way, it just became a matter of sighting along a clearly visible section to see where it must go. Thus, I found where it goes under Red Morton Park, and where it passes beneath Hawes Elementary school. Buildings cannot be constructed on the right-of-way, but fences and parking lots can. Thus, if you really look, you’ll notice a lot of oddly shaped parking lots that lay at funny angles, which suddenly make sense when you imagine a large pipe running beneath. For instance, the Sequoia Christian Church, which fronts onto Topaz St. (near Brewster) has a parking lot that opens onto Harding Ave., largely because nothing else can be built there:

From Harding, looking through the church’s parking lot, as in the above picture, it is clear where the aqueduct tunnel runs.

Redwood City is currently in the middle of a building boom. Numerous large commercial buildings and housing projects are either being built or in the planning stage. I have been watching with keen interest some of the major housing projects that are going up at the old Mel’s Bowl site, at the old Dodge dealership (on Veteran’s), and out on the way to Pete’s Harbor (Marina One). I plan to continue following these projects, and will write about them in future blog posts.

In addition to being a computer programmer, I am a writer: both a technical writer and an occasional blogger (when I see the value in building interest in a subject, such as when Nancy and I went on our most recent cross-country Amtrak trip). It took my good friend Geri Friedman, however, to point out that I should be writing about what I am seeing on my walks. Thus, I give her full credit for the creation of this blog.

My plan is to do a (roughly) weekly column that is focused mainly on what I observe as I walk around Redwood City (and San Carlos; I live towards the northern end of Redwood City, and walking north quickly takes me into San Carlos). Thus, I’ll also be writing about things like The Saltbox, which is a new restaurant that is rising from the remains of the old White Oak Hardware store on Laurel Ave. in San Carlos. Wherever I can get to on foot from my house, I’ll write about. And I won’t just be writing about buildings: I plan to highlight interesting houses, yards, fun walks that others might enjoy, walking tips and facts (such as dealing with areas that lack sidewalks, as is the case in many parts of unincorporated Redwood City). I may even throw in the occasional restaurant review, as Nancy and I enjoy dining out and love to try new restaurants. Whatever I write about, when appropriate I hope to provide additional background detail beyond just my observations. So while I will include photographs and will discuss what I personally experience, I’ll also be searching the web and talking to people to try to better understand just what, for instance, is being built and why.

I hope that this blog proves interesting to you, the reader. While it may not be particularly interesting to anyone not well acquainted with Redwood City, for those of you who live here (or who once lived here, or who hope to live here), if you are interested in watching Redwood City as it continues to grow and change, as I am, click the “Follow” button in the lower-right corner of this window (if you have a WordPress account and are logged in, “Follow” appears at the top of the browser window). Following this blog will cause an email to be sent to you whenever I publish a new post.

6 thoughts on “A little background, please…”