I have been thinking about doing this blog for a couple of weeks now, but I had a two-week trip planned around my son’s wedding that I needed to get out of the way first. It took me a couple of days after returning from that trip to get settled back in, but once settled I resolved to take a walk and check up on a number of projects I had been monitoring. I took a rather convoluted walk through downtown Redwood City, taking pictures and becoming increasingly amazed at all that was going on. I’ll save the bigger development projects for later posts: those probably deserve a more in-depth exploration. However, on my walk I discovered a couple of things that seemed worth pointing out, things that are new and are going to be very visible, very soon.

The first new thing I encountered, in front of the Redwood City library’s main branch, was this:

I’m not sure when these were installed, but I’m pretty sure it was within the last two weeks, when I was away. These are Bay Area Bike Share kiosks; shortly there will be a number of bikes here available for rental. This service started in San Francisco; Redwood City seems to be one of its first expansion points. There are actually six of these setups in Redwood City. In addition to the one at the library, there are also bike rental kiosks at:

Once you have signed up for the service, you use either a keypad-entered code or a credit card to rent a bike for any length of time. The bikes are actually free for the first 30 minutes, and then you pay for any additional time. You can return the bike to any of the kiosks: you could rent one at Caltrain, for instance, and then return it at Kaiser. Bay Area Bike Share could be ideal for people commuting by bus or train from outside the area, who can use a bike to run an errand or get to an appointment. The pricing is such that renting one for a full workday is not economical, however, so people won’t be using these regularly to get to work. Personally, although I already own a bike and thus don’t need to rent one in Redwood City, I plan to sign up and try it out just to see how it works. And who knows? They have a number of kiosks in San Francisco and in other areas around the bay, so perhaps I’ll actually make use of the service.

On my way to check out the bike rental kiosk at the Caltrain Station, I walked through Sequoia Station. I naturally had to check out the progress being made on the Pet Food Express store (which had previously been a Fresh Choice). Construction was still ongoing, as was evident from the contractor vehicles and building materials outside. As I approached, however, I was surprised to see what looked like bags of pet food in the window. There were no barriers of any kind, so I walked right up to the front door (which was open) and peeked in: the store was fully stocked and looked ready to open! 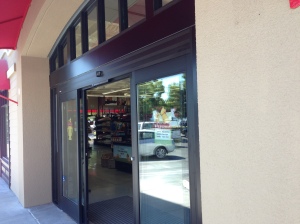 As I walked away, my suspicions were further confirmed by a large semi, loaded with pet supplies, trying to navigate the Sequoia Station parking lot in the middle of the day. Normally suppliers come during off hours, but I suppose that exceptions must be made when fully stocking a new store like this.

I’m guessing that they’re open by now, as I write this. I don’t know why the company feels the need for another store so close to their existing ones (you’ll find Pet Food Express in San Carlos, across the parking lot from Home Depot, and at Woodside Plaza in Redwood City). And I don’t know about you, but I’m not excited about chain stores like these pushing out the little independents. When we had Velocity, our greyhound, we always bought our pet supplies at San Mateo Pet Supply (346 El Camino, in Redwood City), and plan to continue doing so once we have settled on another dog. Pet Food Express might be a tad cheaper, but I’m willing to pay a few cents more to keep Redwood City from morphing into just another town with none of the unique flavor that independent retailers bring.

My last little time-sensitive find isn’t quite as timely: this is something I observed a number of weeks ago, and wondered about until I saw a “Mr. Roadshow” column that addressed it. After you exit 101 at Whipple and you head west, just before you get to El Camino—at the Ben Frank’s hot dog place—is this: 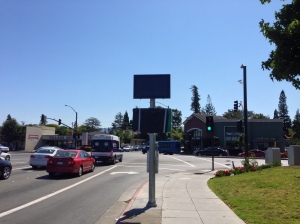 What you are looking at is a small electronic sign, beneath which is a conventional metal sign (currently covered up with black plastic). Here is the back side, in case it isn’t clear:

This isn’t actually the first one I saw; there is one across the street and up El Camino just a bit, in front of the 7-Eleven:

And once you’ve seen one or two, you realize that they are springing up all over the place. So what are they? They are part of what San Mateo County has termed the “Smart Corridor Project,” which consists of these signs, plus cameras, detectors, and the connecting of some 250 signals along a 14-mile stretch of El Camino from San Bruno to Redwood City. In the event of a major incident along 101, these will be used to route traffic around the incident, using El Camino as the major detour route. The electronic sign will presumably just show an arrow or some other directional information, since it is too small to provide much in the way of detail. Oh, and the metal sign underneath? It is simply is a green “101” sign (I managed to catch sight of one before they covered it up). I’m not sure when these will be activated, but keep an eye on them. It will be interesting to see how well they work, and how often they are used. While I’m not on 101 as much as I used to be, and thus probably won’t be gaining a benefit from these signs, I wonder how often they will be dumping additional traffic onto El Camino, and whether I’ll be getting stuck in the deluge…

That’s it for now. As I said, I have my eye on some of the major housing projects going up around the city, and next time will report in some depth on the closest, and in some ways most interesting to me: “201 Marshall.” This is the building that is currently looming over the intersection between Broadway and the Caltrain tracks. I’ll be sharing stats, conceptual renderings, and some basic floor plans, in addition to recent photographs. Stay tuned!