After having spent so much time last Friday watching all of the activity at the County’s Navigation Center project site, I naturally had to go back this week to watch further progress. Because I walked this time, I didn’t have my chair, and thus couldn’t set up my little campsite. However, I found a somewhat comfortable spot perched atop an orange plastic “K-rail” (those low barriers that are used to temporarily separate vehicular traffic from construction projects, pedestrian walkways, street-side dining spaces, and the like) that was located across the street from the northeast construction entrance to the project site. By the time I got there on Tuesday the stacking was done for the day (and, as I later learned, for the week) but I stayed for quite a while anyway, since the crews were preparing to move the large crane that had been used to stack up the residential modules, and I was curious how that was going to go.

To begin with, they had completed the row of triple-stacked modules that will make up the northeastern side of the center. Here is that completed row, as viewed from my little perch across Maple Street:

In last week’s post I included a site plan, but noted that a comparison of the modules that had been installed so far, and the plan, clued me in that the plan was likely not up-to-date. That turns out to be true. For a better indication of just how the prefab modules will be laid out, we need to look to the rendering that is included on a sign next to the project site entrance along Maple Street: 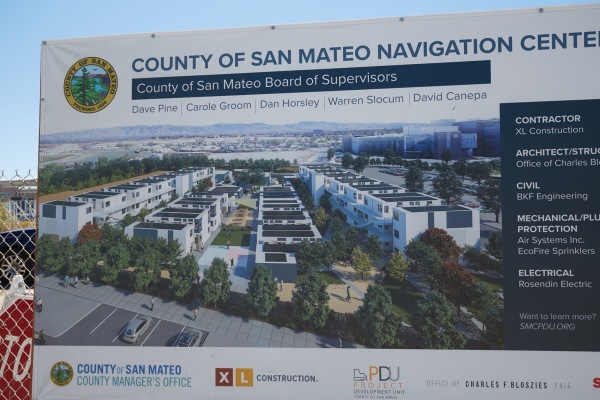 The layout still consists of four rows of varying heights, and the northeasterly row (along the left edge in the above rendering) still has the same number of residential modules as shown in the plans. However, close inspection of the plans shows two stacks of toilet/shower modules interrupting the steady march of stacked residential modules, and those toilet/shower modules are nowhere to be seen in either the earlier photograph or in the above rendering. The toilet/shower modules being missing turns out to hinge on another question I had in last week’s post: what are the two center doors for, where I thought there was supposed to be a third bedroom (look at the right side of the modules in the following close-up image): 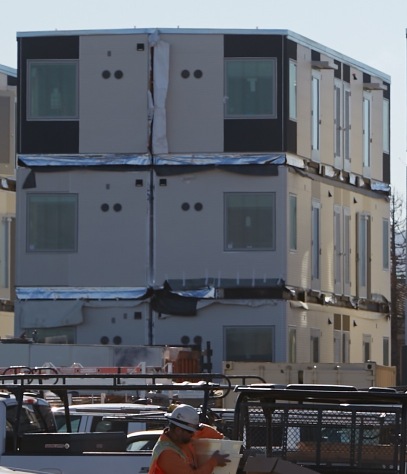 As it turns out, the list of modules, and their configurations, that I got from those early plans is no longer correct. The announcement that the county issued when the project actually got underway includes a better list, for those who are interested in these things (as I am):

From this, it seems clear that there will still be some number of restroom modules, but not as many as shown on the out-of-date plans. And I’m guessing that the mysterious center doors I noticed on the modules may provide access to those “in-unit” restrooms. Either that, or they provide maintenance access to those in-unit restrooms. Either way, the modules that have been stacked up so far appear to be nicer (and roomier) than what was originally planned. The 168 units with restrooms will each be 200 square feet in size, whereas the 78 other units will be half that, or 100 square feet.

It appears that the two outer wings, which apparently mirror one another, consist entirely of modules containing two of the bedroom/bathroom units. I count a total of 42 modules in the northeast wing, for a total of 84 units. If that is mirrored in the southwest wing, we get a total of 168 units with en-suite bathrooms, which is the total number of that type of unit stated in the county’s announcement. Thus, the two inner wings, which are one or two stories high, must contain the remaining 78 units, using modules that will mostly have four units each.

Whatever the final configuration, with the northeasterly wing now in place, the crane that stacked up the modules needed to be relocated to the other side of the development, where it can get to work placing the remaining modules. The relocation process was fascinating; first, the workers used the crane to remove the massive counterweights from itself. Half of these went on one heavy-duty semi-trailer, while the rest went on another. Then, the crane’s boom was lowered, after which the crane was simply driven towards me and onto Maple Street:

I thought that the crane was heading to the southwestern side of the job site, but I followed (it wasn’t moving all that quickly) and watched as it turned left onto Blomquist Street. I didn’t follow it the rest of the way, but I’m guessing it is now sitting down near the corner of Seaport Boulevard and Blomquist Street, on or near the site where the modules had been staged. I was told that no more modules would be placed until next week, so I expect that the crane will come trundling back on Monday or so, possibly to use the (as yet unpaved) Blomquist Extension to reach the southwestern side of the project.

As for the Blomquist Extension itself, the end closest to Maple Street hasn’t changed much in a week or so, but the far end — which will for now drop into the parking lot of the LiveMoves Maple Street Shelter — is looking really good: 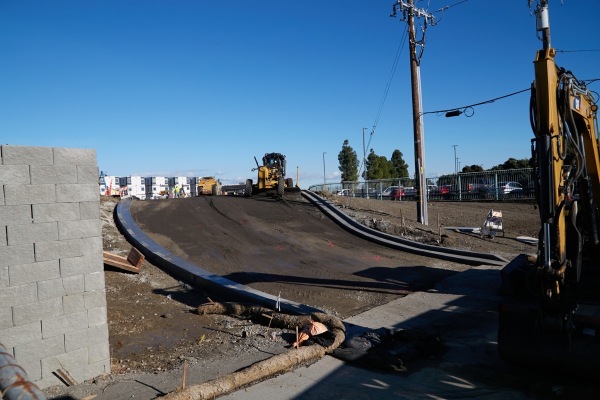 I took the above picture standing in front of the LifeMoves Shelter. Once the residents of that shelter have been moved into the Navigation Center (or elsewhere), the shelter will be torn down and the road will be further extended to the southern edge of Redwood Creek. I’ll be interested to see if that new roadway will be raised up to the level of the two adjacent properties now under development, or whether it will remain at the level of the shelter’s current parking lot.

Next, although the county’s Navigation Center was one of the projects I was most eager to check on this week, it wasn’t the only one. I actually began my walk this week by checking in on the new CVS Pharmacy being built at the corner of Woodside and Bay roads:

I had the good fortune to be able to have a brief chat with one of the contractors in charge of the project. I asked him about the obvious rework that was going on around some of the openings where the windows will soon be installed (here is a closer view of the window to the left of the doorway, showing where the work was being done):

See the right edge of the window, where the concrete block appears to have been chewed away? It seems that the recent changes in our weather caused those steel beams that span the middle of the openings to greatly expand and contract, which caused cracking in the adjacent concrete blocks. The work crews are having to adjust how the two building elements join up, which should prevent similar cracking in the future. It apparently isn’t a huge deal, but I’m sure they’re glad they found the issue as early as they did…

Noting that the project now seem to be making great progress, I asked my contractor friend when the store might actually open. He responded that they were hoping for next June. He also confirmed that once the store was open, the old CVS across Woodside Road would quickly be torn down, and work on the main portion of the Broadway Plaza project would get underway in earnest.

Finally, I walked over to Broadway and then headed to the back of the Smart & Final parking lot, where I could look over the fence and get a good view of the new pharmacy building’s backside. That gave me a good look at where the pharmacy’s drive-through will be located: 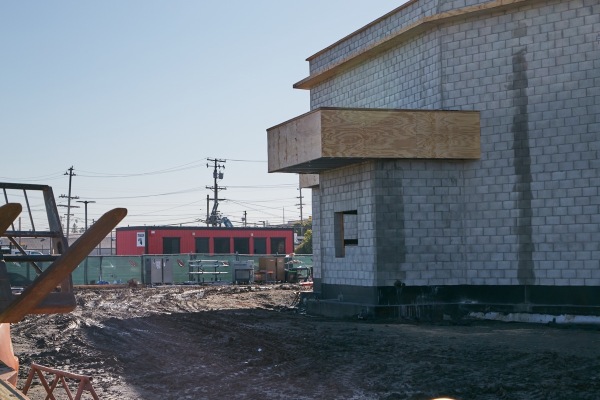 On my walk I also checked in on the ELCO Yards project, and noted that work seems to be getting underway on building out the large subterranean garage that will sit beneath the two buildings on Parcel E (where the roller rink, self-serve carwash, and metal Perry Feeds shed once stood):

While I was there the large crane I included a picture of last week was actively being used to lower materials — rebar, I think — into the pit. The drilling rig wasn’t running, but it does appear to be ready to go.

On my way to Red Morton Park to get some pictures of the progress on the Veterans Memorial Building/Senior Center project, I passed the future site of the Redwood City Discovery housing project, at 1300 El Camino Real. This project, which the Planning Commission has recommended to the City Council for approval (and which is tentatively to be considered for approval by the City Council at its January 23 meeting), would be a six-story, 130-unit for-rent apartment building. It would replace everything from The Record Man to Happy Donuts, and would sit right next to the six-story affordable housing project currently being constructed at 1304 El Camino Real as part of the ELCO Yards project:

Cycle Gear has apparently seen the writing on the wall, and is already in the process of relocating, to 2426 El Camino Real (still in Redwood City, but south of Woodside Road), which was the former home of Sleep Haven Bedding:

That explains why the Sleep Haven building was getting remodeled. But I was curious to note that with Cycle Gear moving out, and with a new project surely to get underway in a year or so, the owner of Cycle Gear’s former location is nevertheless hoping to lease out the space for the interim (note the For Lease sign above the Cycle Gear logo in the earlier photograph).

Red Morton Park and the Veterans Memorial project were my last stop on this week’s walk. Good progress continues to be made, it appears, although from the outside there is little new progress: much of the work seems to be taking place inside and on the roof. But scaffolding on the side of the building facing the soccer field lets me know that the building’s exterior walls may put in an appearance soon, so the building should start to really look like a building in short order.

That’s it for this week. Have a great weekend!