A couple of weeks ago I attended the ribbon-cutting for Redwood City’s Middlefield Road Phase 1 Underground Utility District and Streetscape Project — not to be confused with the project the county has recently started along their section of Middlefield Road in North Fair Oaks (although with many of the same goals). Although Redwood City’s project is not actually quite done — a number of the overhead wires remain, and the new traffic signals have yet to be activated, for instance — Redwood City’s participation in the project largely is, and thus the ribbon-cutting. The remaining work is largely the responsibility of third-party companies such as AT&T and Comcast. 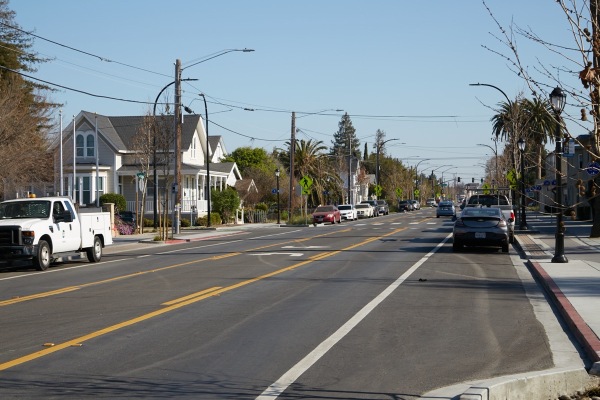 As I understand it, the wooden poles on which all of the wires are strung belong to AT&T. But Comcast first has to come and remove their wires, after which AT&T can take down their own wires and then remove those poles. As for the traffic signals, I’m not quite sure what the hang-up is there. Today, both the old and new signals at Chestnut Street are in place, with the old ones still controlling traffic. Once the new signals have been activated, the old signals and poles will be removed. When that has happened, and when AT&T has removed their poles, the project should really and truly then be complete.

As someone who regularly walks along this section of Middlefield Road, I can attest to the improvements that this project has already brought. The flat, unbroken sidewalk is a great leap over what was there, and the bike lane — a smooth gray ribbon of concrete immediately adjacent to the white sidewalk — should significantly improve cyclist safety along this busy Redwood City thoroughfare. Cyclists and pedestrians will need to be careful to remain in their own lanes, though (gray concrete is the bike lane, white concrete is the pedestrian sidewalk). Anticipating confusion, the city has installed a great many blue signs indicating which lane is for which. And while cyclists and pedestrians still have to navigate the many street crossings and driveways that pepper the route, this project nevertheless already appears to have made Middlefield Road a more popular and attractive route for both.

Although not strictly a “traffic calming” project, hopefully this section of Middlefield Road is a safer place for motorized vehicles using the roadway as well. Elsewhere in the city, however, Redwood City is in various stages on a number of true traffic calming projects. One that has been in the test phase for a number of years now is the one along Hopkins Avenue between El Camino Real and Alameda de las Pulgas. The pilot project — which involved using temporary materials to mock-up the center islands, intersection bulb-outs, and speed humps — has been in place since late 2019. While at the Middlefield Road project ribbon-cutting I took the opportunity to chat with Jessica Manzi (Redwood City’s Senior Transportation Coordinator) about the Hopkins Avenue project. I learned from her that the delays in getting the Hopkins Avenue project permanently implemented have largely been due to some unexpected discoveries beneath the street in the process of drawing up the detailed construction plans needed in order to put the project out to bid. But those issues all have largely been worked out, I was told, and the project should be going out to bid very soon. Assuming at least one acceptable (that is, not outlandishly expensive) bid is received, the bids will be presented to the City Council for approval. After that, the actual construction can get underway.

Lately I’ve been spending a lot of time on Vera Street between El Camino Real and Red Morton Park, keeping an eye on a handful of development projects either underway or up for approval there. Some time ago that street, which had been designated as one of Redwood City’s “slow streets” early on during our COVID shutdown, became the subject of a project to turn it into a “bicycle boulevard” — which will of course have the side-effect of helping to slow down traffic. That project — which consists largely of a number of traffic circles at various intersections plus a lot of painted “sharrows” (chevron-style arrows meant to indicate that bikes share the roadway with cars) — was also mocked-up using temporary materials not too long ago.

The so-called “quick build” was completed in January, and the results will be evaluated and, if necessary, modified, in the spring and over the summer. It actually extends beyond Red Morton Park, running all the way to Alameda de las Pulgas (there apparently is a traffic circle at Ruby Street, and curb extensions where Vera Avenue meets Alameda de las Pulgas). On this project, I don’t know if — assuming the project is deemed to have met its goals — the rubber elements will be made permanent using concrete, or whether the rubber bumpers will simply remain in place. I presume that concrete is planned to be the eventual medium, but I wouldn’t be surprised to learn that to save costs the rubber elements will be deemed sufficient.

Traffic calming will be done in other parts of the city on an as-needed basis. For instance, I believe that as part of the project to build a new Veterans Memorial/Senior Center building, elements will be permanently installed along Madison Avenue and Valota Road where they run alongside Red Morton Park in order to discourage excess traffic and to keep the roadways around the park as safe as possible. And new bike boulevards will be constructed along streets such as Lathrop Street, which parallels Main Street between El Camino Real and Maple Street. This last will be constructed as part of the South Main Mixed-Use (ELCO Yards) project, and should help to get some of the cyclists wanting to ride between downtown Redwood City and areas south of Woodside Road largely off El Camino Real.

If you can’t tell by the shortness of this post (which a few may be cheering!), I’m traveling this week, with today finding me in Phoenix, Arizona. While here I was delighted to discover that an enterprising group of folks has made excellent use of an empty Orchard Supply Hardware space: they’ve turned it into a brewery, distillery, and pub. Orchard Supply Hardware stores, as you probably know, were quite large and had a good-sized outdoor garden center. The brewpub uses the outside space, and a portion of the building’s interior, for dining. The remainder of the interior is, of course, the brewery itself. Here is a picture I took of the outside space:

As you can see, it is quite popular. In addition to the dining tables, there were ping-pong tables, and chairs seemingly designed just for dogs. Yes, this place is quite dog-friendly, as was evidenced by the number of dogs that had accompanied their owners that day (and the pieces of furniture seemingly constructed just for them).

Here is a view showing a portion of the interior space:

This of course looks a lot like a typical brewpub, with plenty of TVs showing a variety of sporting events. Note the high, exposed ceilings that were characteristic of Orchard Supply Hardware stores.

Finally, here is one additional photograph showing a portion of the building’s exterior. Behind these doors is the brewery and distillery; note the large number of metal beer kegs stacked inside the window.

Being a former OSH store, the folks who created this place — creating being the operative word, given how creative the reuse of this space is — called it OHSO – which of course is just the initials of Orchard Supply Hardware, rearranged, with an extra “O” thrown in for good measure. They say that the letters stand for Outrageous Homebrewer’s Social Outpost, but clearly they made up that phrase after determining to use the letters of the building’s former occupant.

In case you are curious, there are four of these places in the Phoenix metroplex. I don’t know if all of them are former OSH stores or not, but the one in Paradise Valley certainly was. Oh, and the food and beer were great, so do consider checking them out if you are in the area and enjoy that kind of thing. And if anyone is really intrigued by the idea and wants to do something similar, I’ll note that Redwood City has an old Kmart store sitting empty…