Redwood City has changed quite a bit over the last decade or so, but we aren’t unique in that. Although Redwood City may have gotten the jump on some of its neighboring communities, these days some of those communities are undergoing some pretty drastic transformations as well. In looking back over my past articles I’m realizing that it is time to do an update on Menlo Park, but you only need drive through that city along El Camino Real to get a pretty good idea of the status of some of the major development going on down there. This post, though, is not about Menlo Park. Instead, I want to put the spotlight on San Carlos. About ten days ago I spent a great deal of time exploring San Carlos’ industrial east side (between the Caltrain tracks and Highway 101), and I left there feeling a deep sense of awe. Talk about unrecognizable: that part of town is transforming quickly, and in a very big way.

Just as developers of high-rise office and residential projects discovered downtown Redwood City, so, too, have developers of life science projects seemingly discovered San Carlos. I’ve written about the Alexandria Center for Life Science before, but allow me to begin with that project, which is essentially complete (and indeed is partially occupied) at this time. That project, which resulted in the construction of two six-story, mirror-image glass buildings along Industrial Road just south of Bransten Road in San Carlos, isn’t the first life science project to be completed in the area, but it has to be the biggest. Plus, it is merely a precursor of what is likely to come.

Now that the construction fencing and temporary barriers have all been removed, I finally felt free to wander into the center of the project, and see what lies just behind these two showy glass structures. Along the back of the property, and clearly visible from the freeway along which it stands, is the project’s parking garage. On this visit, I was able to see it from within the property:

It’s a fairly nice looking garage, but is somewhat deceptive: its three above-ground floors are matched with three additional below-ground ones, providing parking for a whopping 1,500 vehicles. In front of that garage, in the very center of the above photo, is an interesting piece of public art. I get the impression that it may animate, although it wasn’t doing anything when I was there, so perhaps not.

Between where I’m standing and the garage, you can get some idea of the outdoor space that folks working in the two buildings are able to enjoy. The small building along the right side in the above image appears to be an outdoor kitchen of sorts that presumably will be used for special gatherings and, perhaps, to serve lunch in a neighborhood that has few amenities. Here is a better view of what I’m calling an outdoor kitchen:

I mentioned that this development may be a precursor of what is yet to come. That is because Truebeck Construction, who built the grandly named “Alexandria Center for Life Science,” is already clearing a significantly larger space quite nearby for a second phase. Their new project proposal, which has yet to be approved but is going before the San Carlos Planning Commission this Tuesday, July 19, at 7 p.m. (via Zoom, in case you care to watch), is a doozie: 1.5 million square feet (the two existing Alexandria buildings combine for about 530,000 square feet) spread over seven buildings sitting on a 25-acre parcel. This parcel is located kitty-corner from the existing development, and extends all the way from Industrial Road to Old County Road. It is bordered on one side by Commercial Street, and the other by Pulgas Creek. Of that block, only the bit between Pulgas Creek and Brittan Avenue would be spared (one of the buildings on the bit that would remain is the Pep Boys auto parts store). A couple of large businesses occupied this parcel at one time, including Kelly-Moore Paint Company (on the Old County Road end) and L3 Electron Devices, on the Industrial Road end.

Here is a plot plan showing how the developer hopes to lay out the seven buildings and the two eight-level parking garages (which together would have capacity for more than 3,600 cars) on the property: 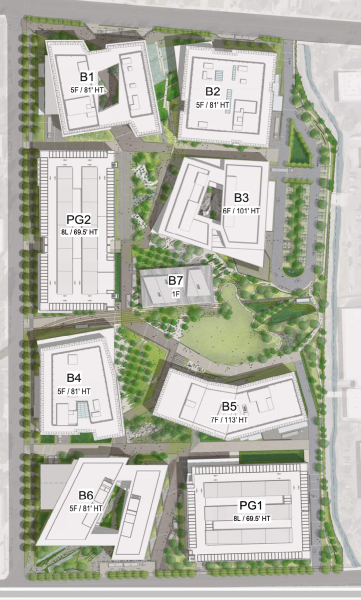 Although the project has yet to approved for construction, when I was there plenty of heavy equipment was being used to clear the Old County Road end of the project site. Because the developer intends to build this massive project in phases, for now it appears that only the portion of the property where the first phase would be built is being cleared. 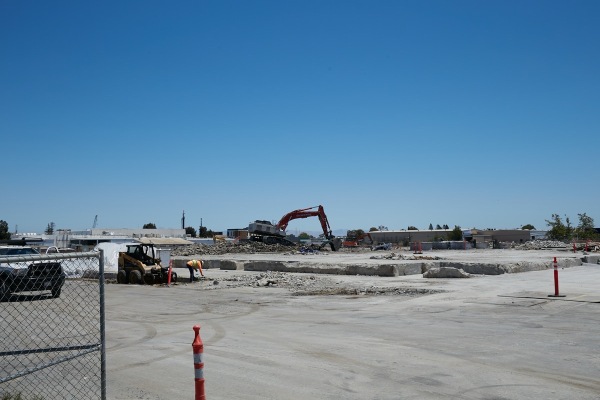 When I was there, the Kelly-Moore headquarters building, which is located midway down Commercial Street, was still standing (they’ve since moved to a new site on Bransten Road). However, it was behind construction fencing and may not be long for this world:

With projects like this, developers often preserve a building for a time to use as a construction office, and at first I thought perhaps that is why the Kelly-Moore building was still standing. However, as I worked my way around the block, I realized that Truebeck is using a different, much larger building for that purpose (one that would be torn down only in the final phase of construction): the old L3 Electron Devices building along Industrial Road:

I’m looking forward to watching this project go through the approval process. It has the potential to really change a part of San Carlos that most people pay little attention to. Next time you are at Home Depot, drive one block up Old Count Road and have a look for yourself. It’s pretty awe inspiring.

This next phase of the Alexandria development may be San Carlos’ biggest, but it isn’t the only such project going on by far. One that is already under construction is located at the very visible corner of Industrial Road and Brittan Avenue:

Those tall crane-like machines are pile-drivers: the three-story life science building that will be built on this site will sit atop a two-level subterranean garage, and these machines are shoring up the sides of where the hole for that garage will soon be dug.

When complete, this should be a pretty attractive building. Here is a rendering of what it should look like as viewed from Industrial Road when completed:

Not yet under construction, because it, too, has not yet been publicly reviewed and approved by the City of San Carlos, is yet another nearby life science project. This one caught me by surprise, given its location:

Yes, believe it or not, the Primo Honda building, which first opened its doors on June 25, 2018, has been sold. The new owner hopes to remodel the existing structure and turn it into a life science office and laboratory building. Their plans call for adding a third story to the existing two-story building (which, somewhat unusually, floats above a mostly open ground floor that is currently used for vehicle service and storage). As I understand it, this building stands upon contaminated ground, which is why the developer intends to minimize the changes made to the existing building: they want to avoid any further disturbances to the ground. But although this is just a remodel, it is a significant one, at least from a cosmetic standpoint. Here is one of the renderings that the developer supplied to the city showing what the new building might look like: 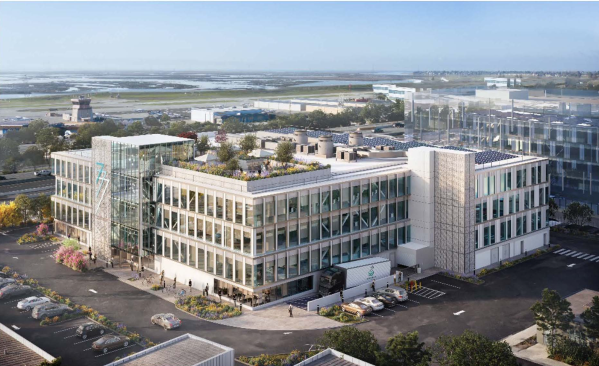 As for Primo Honda, having just constructed and moved into this brand-new building from their former Redwood City site just three years ago, I can’t see them doing it again somewhere else. So I’m guessing that Primo Honda may well be closing their doors for good, assuming that this project gets the go-ahead from the city. I hope they actually do relocate, though: my wife and I obtained two cars over the years from what was then known as Honda Redwood City, and I’d hate to see them go away altogether…

Although it isn’t strictly called out as a life science project, the final building I want to bring up this week is one that would be “a new, three-story R&D structure with one level of below-grade parking,” with “75,782 square feet of laboratory, offices, and event space.” With labs and offices, and being located as it would be next to an existing life science building (the MBC Biolabs building at 930 Brittan Ave.), this new building surely would be marketed to life science companies.

The proposal is to replace an existing two-acre surface parking lot with a new three-story building, one that would look something like this when viewed from Brittan Avenue:

I am not familiar enough with San Carlos’ leadership to be able to judge the likelihood of their approving those of these projects that are not yet under construction. However, given that they are in a part of town that is intended to be used for industrial purposes, there likely will be few objections from neighboring businesses. Given their close proximity to Highway 101, I’m guessing that these projects are not going to have too many traffic impacts on the streets most San Carlos residents regularly use. And given the current high interest in life science projects, and the taxes that the city may take in from the companies that would lease these buildings, there are strong reasons to support them. As I said, though, I don’t know the current mood of either the Planning Commission or the City Council regarding projects such as these, so I, like you, will simply have to watch and see. Starting this Tuesday, with the Planning Commission review of the second phase of the Alexandria project…

7 thoughts on “We Aren’t Unique”