About a month ago, reader Autumn asked if I knew what was going on at the San Mateo County Road Department’s Grant Corporation Yard property in Redwood City on Chestnut Street, where a small building had recently been removed. I had noticed that myself while driving by (part of my weekly Meals on Wheels route takes me down Chestnut Street), but hadn’t yet walked by to take a closer look. In response to Autumn’s query, I walked by and took some photographs of the entire Grant Yard site. However, just from an in-person visit I was unable to tell exactly what was going on. Thanks to the magic of the internet, though, I eventually managed to learn what was planned for the portion of the county site in question, which is on Chestnut Street right about where Hilton Street dead-ends into it.

Because most of us have probably seen this site but may not be able to place it based on the street names, here is an overall picture of the yard: 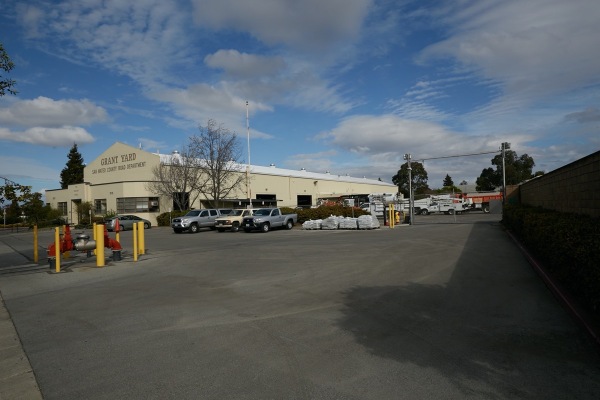 As for what goes on here, according to documents associated with this project, “Operations of the Grant Corporation Yard include equipment maintenance and repair of County-owned larger trucks, vehicles, and equipment, indoor and outdoor vehicle, material, and equipment storage areas, refuse dumping and refueling areas, and incidental offices use.”

Just off the right edge of the above picture is the part of the overall site in question. Here is a picture of what it looked like a couple of weeks ago, when I was visiting: 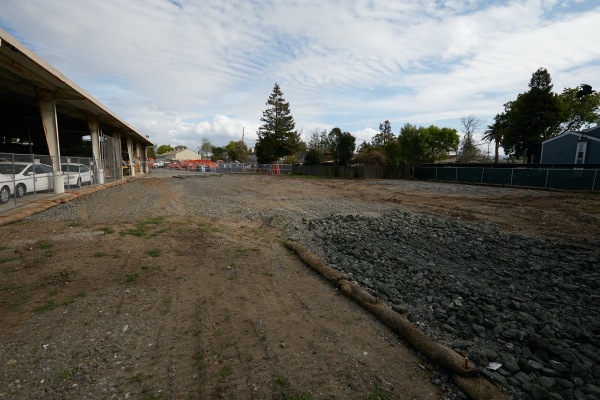 Before it was demolished, there used to be a 2,700 square-foot single-story building here that was used for County pest control services. The plan, though, is to build a new, 13,000 square-foot two-story “radio service facility” on this site. According to those same county documents, “The new building would contain both office space and a service garage to work on County vehicles and radio equipment.” Apparently, the county used to have a radio service facility about half a mile away, at 1320 Marshall St., but that has already been demolished. The old facility was not only used for equipment storage and repair of County radio equipment, it was also where the county monitored communications on the county’s two-way radios. All of this functionality is planned to be shifted to the new, significantly larger facility.

The county has posted some basic plans of the new facility, and those plans include a nice rendering or two. Thus, I can share with you what the county hopes that the new facility will look like when it is complete: 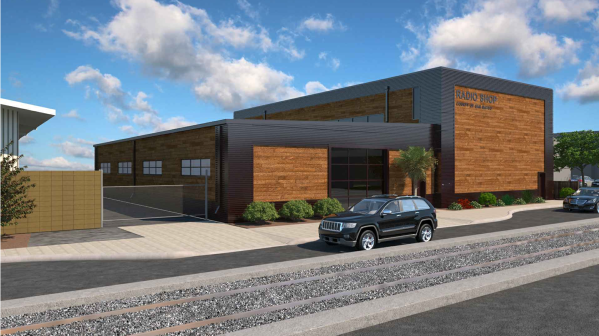 Although the new building doesn’t look anything like the old Grant Yard buildings immediately adjacent, it is certainly an attractive enough building, and should look good to those of us who periodically drive by along Chestnut Street.

While researching the above project, I also happened to stumble across a private project proposed for a site on El Camino Real in North Fair Oaks (which is an unincorporated part of San Mateo County; development projects there need to be approved by the county). Here is the site, which is located at 2567 (and 2561) El Camino Real:

For orientation, the above two buildings are located on the east side of El Camino Real, a few blocks south of the Target shopping center. They are basically across El Camino Real from University Art, if you know where that is. In any case, the proposal is to tear down these two buildings and replace them with a 69-room, four-story hotel. If the renderings are at all accurate, here is what that hotel would look like, assuming it is approved:

This is not a large site, and the rooms and the (lack of) amenities reflects that. Of the 69 hotel rooms, 66 would be quite small: only 165 square feet each. These rooms would be just over eight feet wide and 23 feet deep. That gets you just enough space for one person to get comfortable: each room would have space for an enclosed toilet, a stall shower, and a sink, plus a single bed, a desk and chair, and a small closet. Here is the plan for one of these rooms: 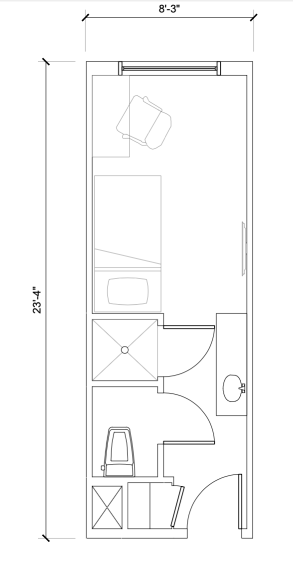 (click the above to be able to zoom in on it)

As you can see, there isn’t a separate “bathroom” in the typical arrangement, although all of the needed facilities are there. Also notice that the room’s television is bolted to the right-hand wall, opposite the bed: a guest would either lie in bed to watch the TV, or sit on the bed or turn the desk chair and watch TV from a bit of an angle.

The remaining three hotel rooms would be about twice as large as one of these “standard” rooms — they would be the hotel’s required ADA rooms, for their disabled guests.

The hotel’s 69 rooms would fill the second, third, and fourth floors of the building. While the ground floor would contain the hotel’s small lobby and lounge areas, the vast majority of this floor would be taken up by the building’s ground-level garage, which apparently would rely on mechanical stackers to squeeze in 51 vehicles (spaces for 48 are required) vehicles. A valet would apparently be on site to store and retrieve cars from those stackers.

This hotel appears designed to have just what a single visitor needs, and no more. Accordingly, I’m guessing that the room prices will be noticeably below the rates charged by other area hotels. Certainly, the hotel would fill what I’m guessing is a gaping hole in our area’s lodging portfolio: clean, but basic lodging for what surely will be a relatively cheap price. Accordingly, I’ve added this 2567 El Camino Real Hotel Project to the list of projects I keep a close eye on, and will write more about it as the project progresses. Unfortunately, I missed the late-February meeting at which public comment was taken; hopefully the results of that meeting will be posted online.

From the “when it rains, it pours” department, after using my previous two blog posts to tell you something about the three newest projects that had been added to Redwood City’s Development Projects list, there is now a fourth: the “Autozone” project that was presented to our city leadership as part of its Gatekeeper Process was just added to that list. So far, the entry on that list for this project only includes a very brief description, and this rendering:

There are no plans as yet, so for the moment we’ll just have to content ourselves with the brief description that accompanies that rendering:

…a seven-story 169,686 sq. ft. office, a two-story 4,462 sq. ft. teen center, and a 4,000 sq. ft. public open space (Chrysanthemum Plaza) on El Camino Real between Winklebleck and James streets. In addition, the project would provide 60 affordable units at an offsite location, which will be a separate application.

Here is the site for which this project is proposed; it is located directly across El Camino Real from Sequoia High School’s sports fields:

The two-story “teen center” shown in the rendering would replace the taqueria you see in the right portion of the above photo. The abandoned Yumi Yogurt building (just barely visible behind the taqueria’s sign, at the end of the long beige wall) would be roughly where “Chrysanthemum Plaza” would be located, and the far-off white-and-orange Autozone building you can see in the center of the photograph would be replaced by the seven-story office building. As for the “offsite location” where the 60 affordable housing units would be constructed, during the Gatekeeper Process presentation they were to be constructed where the A-1 Party Rentals building is today (on Broadway between California Street and the Caltrain tracks). At least one other developer seems interested in that site, however, and depending upon what the city plans to do vis-a-vis grade separation for the Caltrain tracks, that site may or may not still be viable for this particular project. We’ll have to wait for more information to be posted to the city website before we know exactly what the developer has in mind.

One project that has been on the Development Projects list for a little while now is the Arguello Street Mixed-Use Development: the office, below-market-rate housing, and child care center development planned for the large A-1 Rents parcel at Arguello Street and Whipple Avenue. I described that project in some detail back in July (in High-Rise Surprise). Now, the project’s developer is hosting a “virtual community open house” next Thursday, April 8, from 6:00 – 7:30 p.m. Anyone interested in attending that online open house needs to sign up in advance; go to https://1111-1227arguello.com or email community@1111-1227arguello.com to do so.

7 thoughts on “Tuning in to the County”