You just had to know that after Redwood City held its first-ever Halloween home decorating contest, that it would follow that up with — what else? — its first-annual Holly Jolly Home Decorating Contest. The contest costs nothing to enter; you need only fill out the short online entry form no later than 5 p.m. next Friday, December 18. As with the Halloween contest, there are prizes, with first prize being a large yard sign and a $50 gift card to a local Redwood City business. If you are planning to decorate your home anyway (or if you already have, like a number of Redwood City homes have done), what do you have to lose? Entries will be judged on Monday and Tuesday, December 21-22, sometime between sunset and 10 p.m., so you have until then to get your winning display just right. Note that whoever fills out the form has to be the homeowner or the primary renter, and the home must be located in Redwood City, Emerald Hills, or North Fair Oaks.

As I walked around the city this week I saw that quite a few people had already started decorating their homes. I was out during the daytime, though, and was amused by the number of inflatable decorations that were deflated in funny positions. For instance, I caught “Santa Mickey” taking what is undoubtedly a well-deserved rest:

Similarly, over on Junipero Avenue a pair of side-by-side houses each had inflatables inside their front-yard trampolines. There, I caught Frosty the Snowman taking his daytime break:

I did take a walk down Redwood City’s own “Candy Cane Lane” — Dewey Street — and saw one homeowner actively putting up decorations. Many of the other homes already had some of their elaborate displays either fully or partially installed, such as this place:

Dewey Street always puts on a good show. For some great Christmas cheer, take a drive down this one-block-long street some evening the week before Christmas. (Dewey Street runs from Roosevelt Avenue to Carson Street; head east on Roosevelt Avenue from Alameda de las Pulgas, and you’ll see it where Roosevelt just starts to turn.)

I made my way to Dewey Street after first paying a visit to the Magical Bridge Playground, which has been open for about two weeks now. Having watched every step of the project’s construction process, I of course wanted to see the playground in action. While the city is still doing some landscaping work on a section adjacent to the playground itself, the playground seems to be fully open — at least for the moment. I was pleased to see so many children having such a great time on the playground’s accessible equipment (Magical Bridge is a playground designed for people of all ages and abilities, and allows the disabled to enjoy the playground’s diverse activities alongside those without a disability). 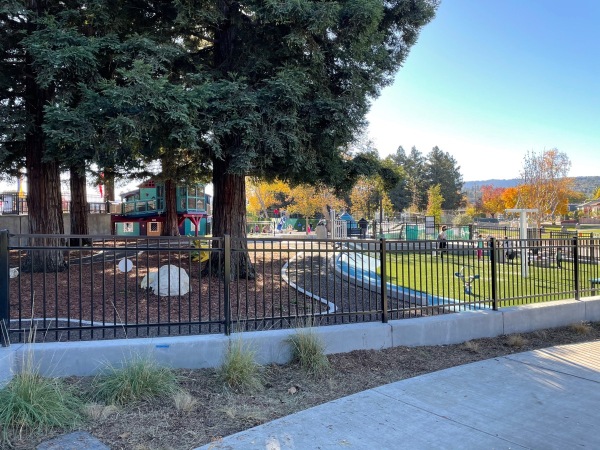 One special feature of the park that I particularly enjoy — Palo Alto’s Magical Bridge playground has one, as do we, but you won’t find it in a typical city park — is the Magical Harp. This innocent-looking arch is a “laser harp” that you play by interrupting the virtual strings that are made possible by a set of sensors embedded along the arch. You can walk along the harp, or run your hands through it, to play music through the structure’s integrated speakers. While I was there I was delighted to see a young man having so much fun with it while his mother looked on:

I’ve fiddled with the one in the Palo Alto playground, and look forward to playing with this one as well.

If you haven’t yet visited the Magical Bridge Playground, I highly recommend that you do so. This playground was largely funded by private donations, but is open to all. And right now it really is open — but depending on how COVID-19 progresses in our area it may find itself temporarily shut down soon. So don’t delay!

My walk this week was largely structured around doing some follow-up to last week’s post, in which I discussed a number of single-family home builds being done by developer Thomas James (TJ) Homes. This week I visited two sites that I knew about but had not yet seen, and I checked on the progress of a number of others. I also looked in on a couple that I suspect may be TJ Homes projects, but don’t have the usual trappings. But in the process I came across a couple of other home projects, not associated with TJ Homes, that really caught my eye.

One of the things I really like about living in Redwood City is the diversity of houses in its residential areas. Unless you live in Redwood Shores, where many of the houses look rather similar to their neighbors, most of the single-family homes in the rest of Redwood City are clearly distinct from one another. Pretty much all shapes, sizes, and styles of house can be found here in Redwood City. Colonials? We’ve got ‘em. Do you like Spanish-style haciendas? We have those, too. Castles? Well, I’ve written about those before; we have a number of more modern homes with round tower-like features, and then we have places like this one that actually does look something like a real castle:

How about log cabins? We have those, too. There is a great old one on Orchard Avenue that was built back in 1989, and then there is this monster up on Woodland Place:

We of course have many Victorians, and, lately, a lot of sleek modern homes like this one over on Atherwood Avenue:

I’m used to see homes being built with traditional techniques, but increasingly I’m seeing new homes (and significant remodels) being built with structures made of steel. I was pleased to see this week that work on the steel-framed structure over on the 400 block of Iris Street has finally resumed, after a delay of at least a year, I believe. But this week there was plenty of work going on, and a great deal of steel has now been added to the portion of the structure that had been starting to become engulfed in weeds while the project sat idle:

When it is complete you probably won’t be able to tell that this house has a steel skeleton, although steel presumably allows you to have features such as extra-large windows that would serve as a tell-tale to someone well familiar with architecture and building techniques. And I presume that this house will be particularly resistant to earthquake damage, so there’s that. But not all metal-framed houses get clothed in a conventional exterior. I was fascinated to see one that isn’t afraid to show its roots over on Virginia Avenue (1657 Virginia, if you want to go by): 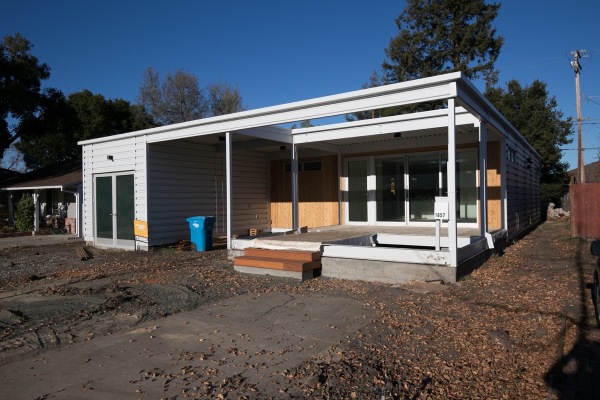 This is actually a prefabricated home made by a company called Connect Homes. I’ve written a bit about this company elsewhere, but not here, yet. Connect Homes is one of a number of companies that have sprung up to, as they say, “reconstruct an outdated industry.” They want to bring modern methods and materials to the homebuilding industry, starting with constructing their homes from standard modules made in their San Bernardino factory. Once the modules have been completed, they are trucked to your site and quickly assembled into a finished home like the one you see above. Connect Homes claims that it can build a home in less than half the time it takes to build a fully custom home (Connect Homes are based on a set of standard models that can then be customized to a limited degree). Currently their standard models range in size from a 460 square foot, one bedroom, one bathroom home suitable for use as an ADU (Accessory Dwelling Unit) up to a 3,200 square foot, two-story, four-bedroom, three-bath home.

In addition to ADUs and full-sized homes, Connect Homes also makes what they call Connect Shelters. Connect Shelters are a line of relatively inexpensive modular homeless shelters built inside 8-foot-by-40-foot metal containers that can be trucked to a site and then made ready for habitation in as little as one day. Connect Homes can build these units, which range in configurations from two to four rooms, with or without private bathrooms, for as little as $20,000 per bed (for a four-bedroom unit with no bathroom). These shelters are particularly of interest to us here in Redwood City, since the County of San Mateo plans to purchase 135 Connect Shelter modules and place them on the current site of the Women’s Jail (which would be demolished) at 1580 Maple Street. In fact, Connect Homes recently brought a three-bedroom module to the County Center in Redwood City, to give county staffers and others a chance to see what Connect Homes provides: 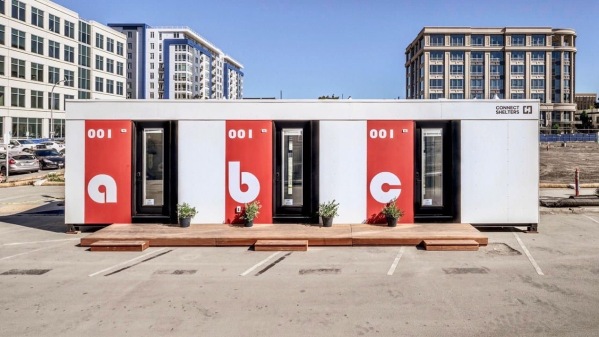 [the above photo is courtesy of Connect Homes]

This appears to be a fantastic way to quickly assemble a sizable navigation center for many of our area’s homeless. (A navigation center is a homeless shelter providing short-term housing along with services that help them to find permanent housing, jobs, health services, and the like.) Thus, we soon may have a small community of homes of this type on the other side of Highway 101 just behind the Redwood City Police Station.

Modular or prefab housing is an interesting solution to the high cost of housing here in the Bay Area. Land is still expensive, unfortunately, but solutions such as that provided by Connect Homes can meet a variety of needs while significantly reducing the cost of building a conventional house on that land. Thus, I wouldn’t be at all surprised to see more homes of this type spring up in our area. And given the diversity of home styles we have here in Redwood City, they’ll likely fit in just fine.

2 thoughts on “A Home Connection”