I enjoy eating out and trying new restaurants, but as you all know, COVID-19 has forced big changes onto our restaurant scene. Since March I’ve probably eaten out (somewhat literally; all but one time by sitting just outside of a restaurant) a half-dozen times or so. Fortunately, pretty much all of our area restaurants were able to pivot, eventually, to some form of delivery or takeout service, allowing my wife and I to continue enjoying restaurant meals, albeit from the comfort of our own home.

While most restaurants seemed to have successfully made the pivot, that does not mean that they are making a profit — or even breaking even. Some were lucky to get PPP money to aid them in hanging on, and the ability of many to serve seated guests outdoors, on our sidewalks and even in our streets, has helped somewhat. But only a lucky few, it seems, have been able to continue dishing up enough meals to ensure that their income is greater than their outflow.

The restaurant business is a tough one. Restaurants fail all the time, for all kinds of reasons. But these new challenges are affecting otherwise well-run restaurants that would, in normal times, be doing just fine. You, like me, are probably seeing stories in the news of restaurants closing throughout the country, along with dire predictions for the future. For instance, this article from early August in the New York Times estimated that roughly 2,800 of that city’s small businesses had permanently closed — and that about a third of those 2,800 small businesses were restaurants. Thus, as of the beginning of August, New York City may have lost around 1,000 restaurants. For good.

That got me to thinking about Redwood City’s own restaurants. On its way to becoming the (self-proclaimed) “entertainment hub of the San Francisco Peninsula,” Redwood City had created a thriving restaurant scene. Friday and Saturday nights found downtown teeming with people, wandering the streets and eating and drinking in the area’s wide variety of dining establishments. These days are a very different story, however. While the closed-off streets and outdoor dining (and now, a limited degree of indoor dining) have brought more people back to our restaurants, the crowds are not nearly what they once were. Wandering throughout the city during prime dining hours these days reveals that we are not immune from the wave of closures sweeping the nation. We, too, have indeed lost a few of our dining establishments.

We’ve lost some, but, to be honest, not as many as I would have guessed back when all of this started. When our shelter-in-place was first imposed, and all restaurant dining — both in-store and outdoor — was prohibited, some restaurants quickly began focusing on delivery and takeout, while others, not used to that type of service, closed temporarily while they worked out how to adjust. Back then, I spent some time running around the parts of the city where we had the most restaurants, putting together a list of which restaurants were open for takeout or delivery, and which were not. I had had thoughts about creating a master list of all of the city’s restaurants along with their operational status, but, after thinking about how much work would be involved in keeping such a list up-to-date and accurate, decided against making the list itself public. I did, however, get a blog post out of it: Out From Under the Shelter. And I kept the list.

Last week, as I was thinking about restaurant closures, I realized that I could use that list of restaurants as something of a baseline. By running around the city again, and checking each restaurant against my list, I could see which ones have so far survived, and which ones didn’t. This time I decided to be a bit more thorough, and so I walked by (I believe) every single Redwood City restaurant, operating or not. I had to do some research to determine whether restaurants on my new list, but not on my old list, had existed back in March, but that turned out to be not terribly difficult. So now, I believe I have a complete list of every restaurant in Redwood City, its current operating status (as of last week, when I paid them a visit) and a rough idea of their status back in March. From this list, I can clearly see which restaurants have closed since COVID-19 first disrupted our lives. Because I’ve been keeping an eye on the restaurant scene for quite some time now, I think I can make a pretty good guess as to why each restaurant that closed did so.

Before I start, a brief word about what I classify as a restaurant. I’m counting anywhere that isn’t a bar (only) or a store, like Whole Foods. Some places ended up being judgement calls. Dunkin’, I counted. Also Baskin-Robbins. I counted bars if they actually do serve real food, and not just pretzels and peanuts. Thus, Ghostwood Brewing, which did indeed close during the pandemic, didn’t count. But places like 840 Wine Bar and Cocktail Lounge (at 840 Brewster Avenue) and Cru, both of which serve enough food to qualify them in my book, did. 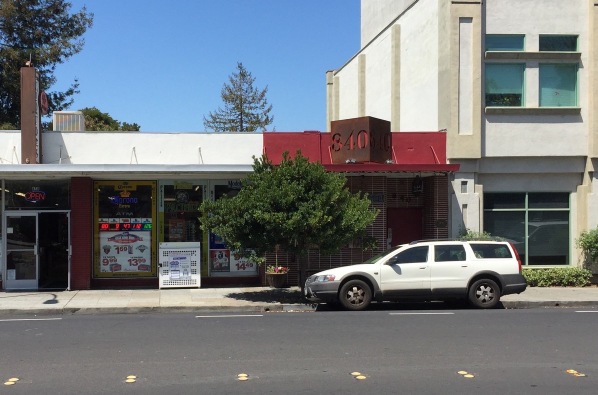 To begin, back in mid-March, I count Redwood City as having 201 restaurants. A significant number of those are downtown, of course, but there are a number of pockets throughout the city. There are the restaurants in Redwood Shores, for instance. And then there are the ones in and near to Woodside Plaza, plus the ones arrayed up and down Woodside Road. We have restaurants in a number of our smaller shopping centers, including Marsh Manor, Roosevelt Plaza, and even the Emerald Hills shopping center. I even made sure to find all of the ones along Veterans Boulevard and down Middlefield Road — in addition to El Camino Real and Broadway, of course. All told, we had 201 of them back then. Now, I count 193.

On the surface, the math is simple: 201 minus 193 means that we’ve lost eight restaurants, right? Not quite. You also have to take into account that, even during the pandemic, a handful of new restaurants have opened in Redwood City. Zareen’s is the latest, of course. But I also include Dunkin’ (on Woodside Road), Vons Chicken (which replaced The Bap, on Broadway in downtown Redwood City), and Gourmet Gyros & Kebabs (which replaced Pita Hub, at the corner of Bay Road and Charter Street).

The other thing making the math complicated is the meaning of “closed.” Some restaurants truly did close for good — Thaibodia, at 910 Woodside Road, disappeared in the interim, although they closed because of an impending development project and not because of COVID-19 — while others are less clear. Nam Vietnamese Brasserie, for instance, has closed, but hopes to reopen early in the new year. While I truly hope that they do — my wife and I enjoyed the couple of times we did takeout from them — for now their doors are closed, so I’ve had to count them as such. The same goes for The Old Spaghetti Factory, which is closed for now but plans to return. Froyola, in one of the small kiosks on Courthouse Square, is closed, but from all appearances they hope to return. Yoho Yogurt, on Theatre Way, closed back on March 17; I don’t know what their future plans are. And then there is Alana’s Cafe, on Main Street near the main branch of the public library. They closed, most likely for good — but there is a hint that once things improve they might be back. While I am not holding my breath on that one, they are truly missed, and I hope that they figure out a way to reopen someday.

So just which restaurants did we really and truly lose for good, likely due to the pandemic? I count four (or five, if you include Alana’s):

Out of some 200 restaurants, that’s only about 2.5%. Not bad, really. Redwood City’s restaurants appear to be doing a remarkable job of hanging on. For how much longer, I cannot say, especially if no additional aid from the government is forthcoming.

Our restaurants are a key part of what makes Redwood City great, and of course collectively they are major employers. Thus, as long as they are there for us, we should be there for them. As much as you can, give them your business, and help them to hang on.

I can’t have a blog post without at least a few more pictures! I spent last week looking at restaurants, but this week I wandered over to Red Morton Park in order to check on the progress of the Magical Bridge Playground. On the way, I passed by this house at 411 Topaz St: 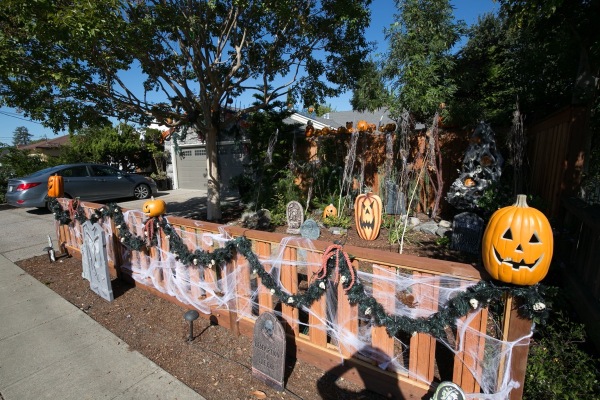 A sign on their fence indicates that they synchronize their lights to a musical track of some sort; go by on a Friday, Saturday, or Sunday night between 7 p.m. and 10 p.m. to get in on the fun.

Once I got to the park, I noted that the main part of the playground itself appears to be pretty much wrapped up:

The landscaping still needs some work, though, particularly between this part of the playground and Valota Road: 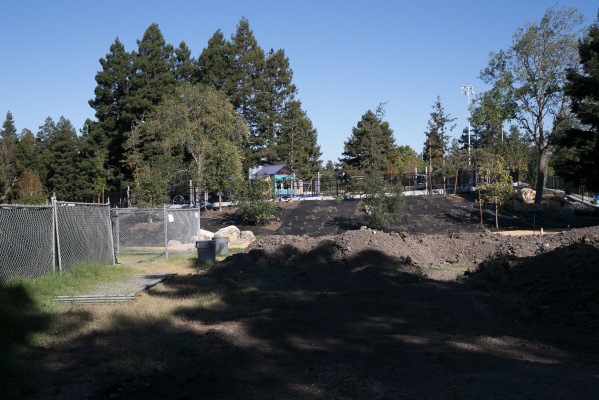 I didn’t see a lot of activity on site when I was there, but I know that they are trying to get this thing open in another couple of weeks, so presumably this will all get cleaned up shortly.

Finally, I pushed on past the park to check out a comment from reader Donna, who indicated that there is indeed one of those giant skeletons here in Redwood City. And indeed I found him, right where she said he’d be. This guy stands at the corner where Redwood Avenue stops and Fairview Avenue begins: 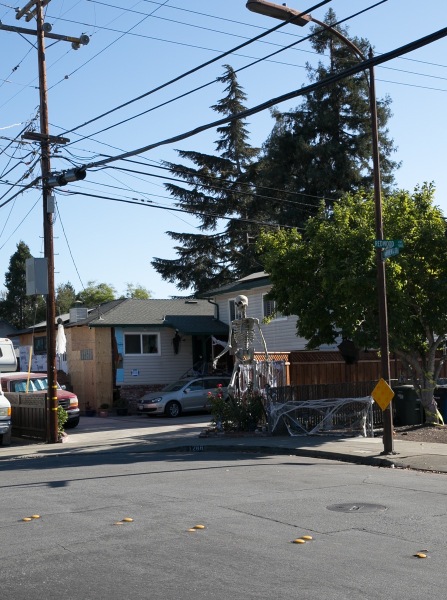 If you want to pay him a visit, Fairview Avenue runs alongside the Roosevelt Plaza shopping center, on the left side (where Baskin-Robbins is) when facing the center. Starting at Roosevelt Avenue you need only walk (or drive, or bike, or whatever) two long blocks to where the street ends and Redwood Avenue begins. And that, of course, is where you’ll find this guy.

Any other good tips? Let us all know by leaving a comment.

4 thoughts on “Hanging On”