I really enjoy going to the movies. Thus, it is with mixed emotions as I’ve watched the slow deterioration of the movie theater industry over much of my lifetime. When television was first invented people sounded the death knell for theaters, but thankfully that death has been a long time coming. Not that it is necessarily here yet, either — but thanks to our current pandemic I expect that it has suffered a serious, if not mortal, blow. At the moment our theaters remain closed, and I am not sure when they’ll reopen. Seeing the closed theaters, and seeing sites that formerly were theaters as I walk around Redwood City, San Carlos, and Menlo Park, it occurred to me that they were worthy of a blog post. This blog post, in fact.

I should begin by mentioning that for this post I consulted the book “Images of America: Theatres of the San Francisco Peninsula” from Arcadia Publishing. That book has a number of great old photographs of local theaters that are now long gone (and a very few that are still with us); if this subject interests you, I can recommend the book. It documents a number of area theaters that predate my moving to Redwood City, which I found very interesting indeed.

I’ve been thinking about writing this post for a while, but it was my recent walk through San Carlos that really moved it to the top of my list. While exploring Laurel Street to see how the city is coping with our current orders from the San Mateo County Health department, I passed this apartment building at the corner of Laurel Street and Central Avenue: 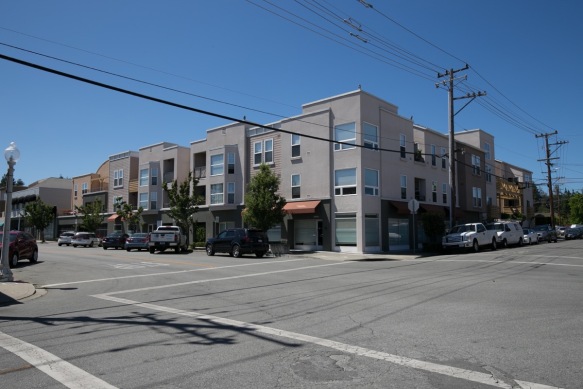 I only saw one small sign identifying the name of the building — the Laurel Theatre Apartments — and that was one that provided leasing information. Thus, many may not realize that as recently as 1985 this was the site of the Laurel Theatre, a somewhat ornate 900-seat single-screen movie house. According to the book, the theater’s sign tower (which had giant neon letters spelling out the word “Laurel”) was preserved when the theater was eventually torn down, and was supposed to be reinstalled on the new apartment building. But of course that never happened…

Although I never saw a film in the Laurel, I remember the theater well; it wasn’t torn down until 1998, more than eight years after I moved my family to Redwood City. I even remember discussing with my brother and sister-in-law, who lived in San Carlos at the time, what it might take to revive the theater, possibly as a place where one could get dinner and a movie. Regretfully, our deliberations never got very far.

The Laurel Theatre was the only theater I actually remember from San Carlos, but apparently there were others at one time. For instance, the San Mateo County Transit District building, on San Carlos Avenue at Laurel Street, was built on a couple of parcels, one of which used to house the Carlos Theatre. The Carlos Theater was built in 1941 and operated until 1976, when all of the buildings on the block were demolished to make way for what then was the new headquarters of Eureka Federal Savings.

The book also confirmed something I had always suspected. If you’ve ever been to the Town restaurant on Laurel Street, you may have noticed that it is located in the “Tivoli Building”: 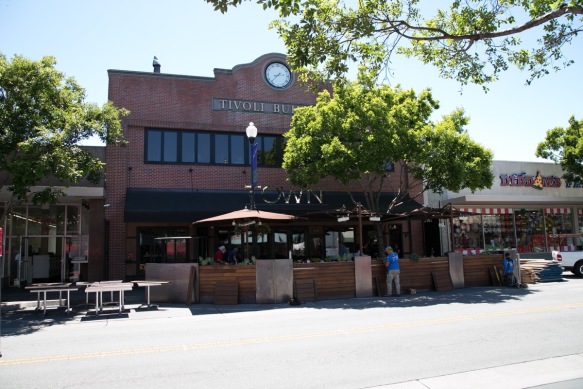 I don’t know about you, but the only time I’ve heard the name “Tivoli” is in connection with a theater. And indeed, between 1965 and 1982 this building housed the Tivoli Theater (later rechristened the “Tivoli Twin,” I presume that the theater’s one screen was split into two).

I never saw a film at any of San Carlos’s movie theaters, but I would be remiss if I didn’t mention a San Carlos theater to which I did go on a handful of occasions: the Circle Star Theatre. Located between Industrial Road and Highway 101, the Circle Star was a venue for live entertainment, and was built “in the round.” The theater’s circular stage was located in the center and was completely surrounded by the audience. That stage slowly rotated throughout the show, giving everyone a chance to look head on at the performers. My wife and I saw a couple of different bands performing at the Circle Star, which operated between 1964 and 1993. After that the building sat empty until it caught fire and was torn down in 1997. Today there are a couple of office buildings and a hotel on the site: 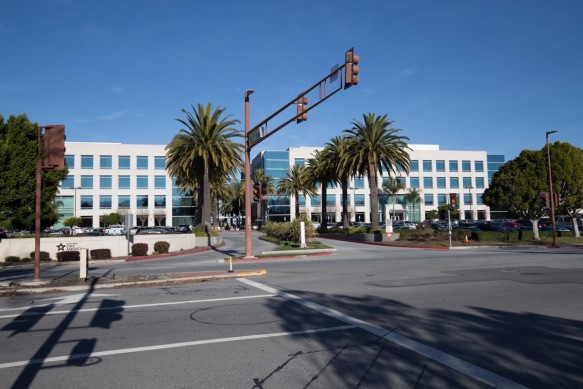 Before getting to Redwood City, I want to give a brief shout-out to Belmont’s (former) premier indoor theater, the Belmont, at 100 El Camino Real: 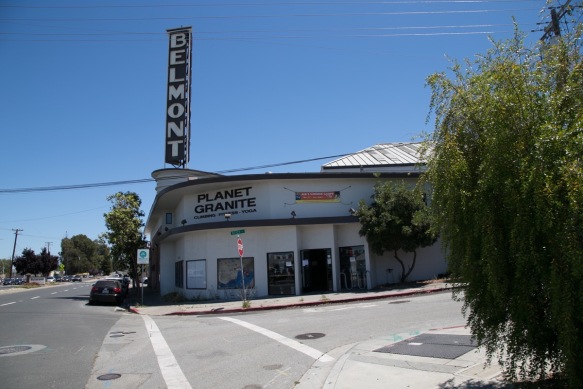 Nowadays this is a Planet Granite climbing gym, but I’m pleased that this place still looks like a theater. I have clear memories of seeing films here back when it was a (then rather ordinary) theater, in its latter incarnation as the Belmont Cinemas Three. The theaters closed in 1997.

Redwood City has had a number of theaters over the years, the earliest of which opened for live performances back in 1896 as the Alhambra. The Alhambra building still stands today, and is one of Redwood City’s lovingly preserved historic buildings on Main Street: 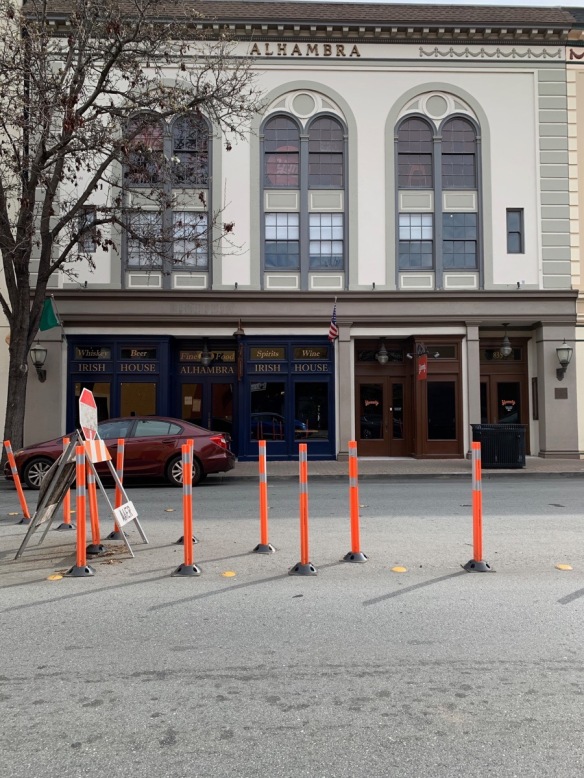 Today the ground floor of this building houses the Alhambra Irish House, an Irish restaurant and bar that I keep meaning to visit (I’ve heard good things).

After the construction of the Alhambra, a handful of other, long-gone theaters opened nearby, leading up to the opening of the Sequoia in 1916. Although the Sequoia had a small stage, it apparently was designed to show films. It was located in a somewhat narrow space that many of you probably visit regularly today (I don’t, as I don’t drink coffee): 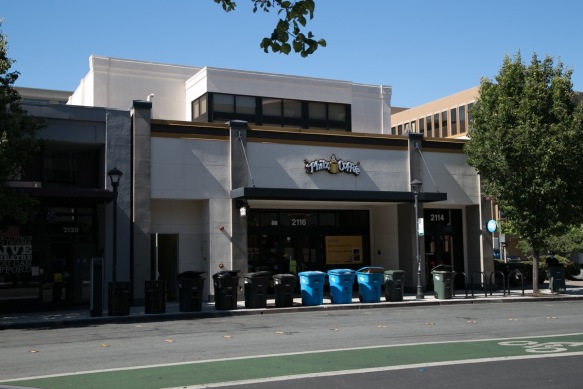 The Sequoia operated here as “Redwood City’s leading motion picture emporium” for ten years, until the proprietor opened their larger, more ornate “New Sequoia” just down the street, in a building that all Redwood City residents are well acquainted with: 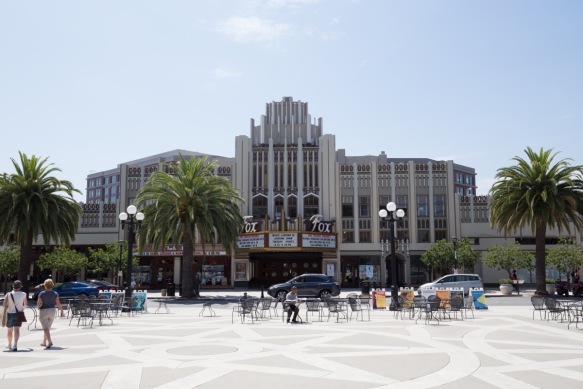 This newer incarnation of the Sequoia kept its name until 1950, when it was remodeled and rechristened as the Fox. It stopped being a movie house years ago, of course, and now is a venue for live entertainment.

Thanks to “Theatres of the San Francisco Peninsula” I learned that the AutoZone auto parts store at the intersection of California and Winklebeck streets was, from 1933 to 1955, the site of the Redwood Theatre, a small movie house. 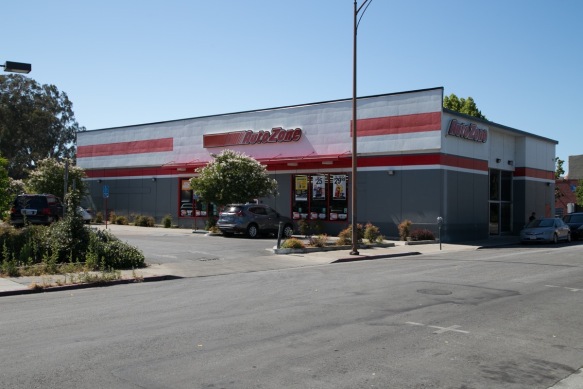 Another long-gone Redwood City theater at which I actually saw a fair number of movies was the UA Redwood 6, a six-screen theater located on Walnut Street in a building that stood where Evernote has their headquarters today: 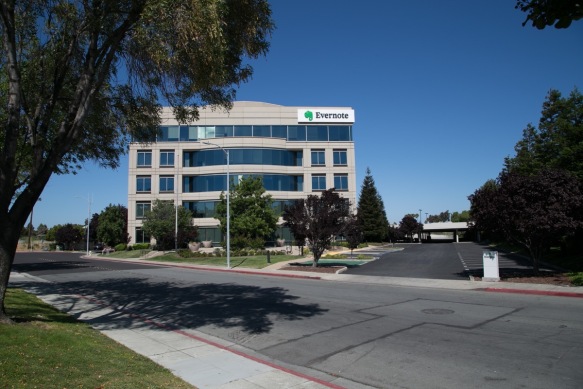 I should mention that although the theater building is gone, the theater’s original two-level parking garage still stands and is being used by Evernote employees. You can see it in the above photograph, just to the right of the office building.

The UA Redwood 6’s six screens were of course no match for the larger complex on the other side of the freeway, the Century Park 12 Theatres: 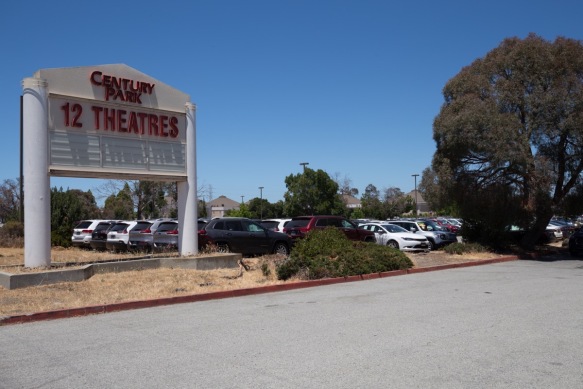 I have many fond memories of going to movies in these theaters with my wife, and this is where we took our kids in 1997 when the original three Star Wars movies were re-released in movie theaters. However, the Century Park 12 theaters have been closed since 2008. Although the domed buildings that housed the 12 screens still stand, since then the buildings have remained unused, while the parking lot has become an inventory storage lot for some of the nearby automobile dealerships. The property’s owner, SyRes Properties, currently is trying to get its latest project proposal for the site approved, which would bring a 480 unit multi-family development and a 97,101 square-foot sport club to the former theater location.

Long-time residents will likely remember that prior to the construction of the Century Park 12 Theaters — which opened in May 1990 — the property was the home to the Redwood Drive-In, which had been built in 1961. According to “Theatres of the San Francisco Peninsula,” when the Redwood Drive-In opened its single screen, at 90 feet high and 130 feet wide it was supposedly the tallest outdoor movie screen in the world. By the mid 1970s the theater had added three more screens, for a total of four. It was finally torn down in 1987, to be replaced by the Century Park 12. Later, the Century Park 12 itself was supposed to (and eventually was, after some back-and-forth with the city) be replaced by the Century 20 Downtown Redwood City theaters: 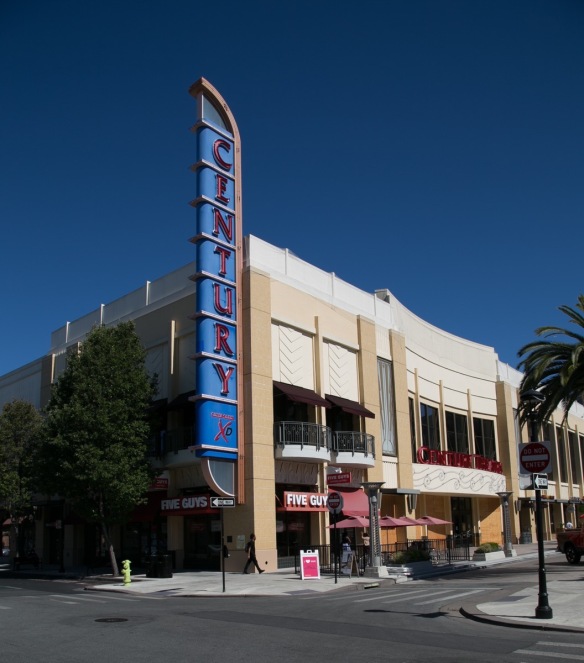 Today this 20-screen movie house is the only commercial theater operating in Redwood City. And of course at the moment it is currently not open for business by order of the County Health Officer.

Just as Redwood City’s theater scene has evolved over the years, so has Menlo Park’s. My wife and I used to enjoy seeing (mostly independent) films at the Guild theater in Menlo Park, which was the last of that city’s theaters to be torn down:

Back in 1923 the theater that until recently stood here — then dubbed the Menlo — was constructed. When El Camino Real was widened in 1947 the theater closed and was remodeled; it opened the following year with a new look and its new name. Although the Guild is no longer with us, I believe that the plans are to construct in its place a new music hall, one that will host live concerts. So at least we haven’t lost a classic — and historic — theater to yet another restaurant or office complex.

The Guild was a single-screen theater, but it wasn’t Menlo Park’s only one. Between 1947 and 2014 the Park stood just down the street, at 1275 El Camino Real. But it, too, recently succumbed to the wrecking ball, and its replacement — a mixed-use three-story building with parking and a commercial space on the ground floor, office space on the second floor, and three residential units on the top floor — appears about ready to open its doors: 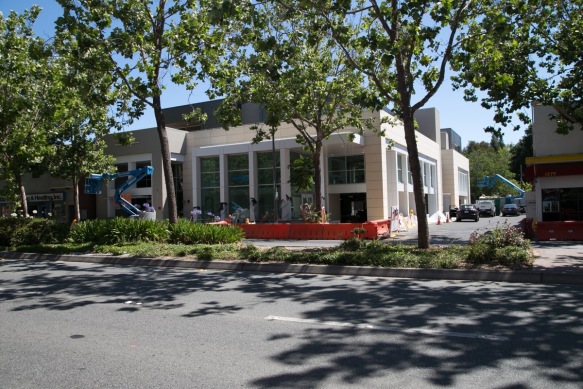 I don’t recall ever patronizing the Park. Nor did I ever patronize the other two theaters that at one time called Menlo Park home: the Burgess Theatre, at 601 Laurel St. in Burgess Park, and the “new” Menlo, which stood at the corner of Santa Cruz Avenue and Doyle Street, where the Left Bank Brasserie does business today: 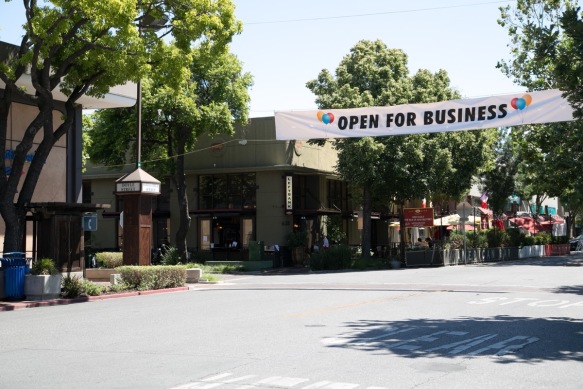 It is sad to think about how many theaters have come and gone in our area. I am especially fond of the classic theaters such as Redwood City’s Fox with its art-deco styling. And I do wish we still had a drive-in or two in our area (for those of you who are similarly nostalgic, I note that on select nights an empty parking lot at the San Mateo County Fairgrounds in San Mateo is temporarily being used as a drive-in theater). I guess I’ll just have to settle for Redwood City’s Fox Theatre — which somewhat worryingly seemed rather quiet even before the shelter-in-place — and its downtown Century 20, which I’m hoping and presuming will reopen at some point. And until they reopen safely, I’ll have to content myself with that other theater-killer, my high-definition television…

17 thoughts on “It’s Curtains for You”