Ever since they closed, I’ve been thinking and writing about possible alternative uses for Redwood City’s Orchard Supply Hardware store. Back in 2013 the entire Orchard Supply chain was bought by competitor Lowe’s, who, five years later, shuttered Orchard Supply completely. Redwood City’s store closed at the beginning of November 2018, just about a year and a half ago. With OSH out of business, I figured that someone would eventually come along and move into Redwood City’s empty OSH building, but I also figured that it would take a while for that to happen. Thus, my most recent proposal for the property — to use it as “safe parking” where people living on our streets in their cars and mobile homes could bed down for the night with some sense of security — was intended to be temporary. Once the building had been re-leased, I figured that the city could find those folks a new location in which to park (I’m looking at you, Kmart).

Orchard’s property was never used as safe parking, and now, it seems, it’s too late: OSH is coming back! I took a walk over there this week, and the first thing I saw was this sign:

OSH is now hiring. And although our revitalized store should look quite familiar, with its large green-and-white signs, it isn’t Orchard Supply Hardware that is hiring, but Outdoor Supply Hardware. Same initials, slightly different name. It seems that a company called Central Network Retail Group (CNRG) is in the business of operating hardware stores, home centers, and lumberyards under a variety of names. In our area, they’ve purchased the original OSH’s brand and intellectual property, and have been snapping up some of the old OSH locations and opening them as Outdoor Supply Hardware stores (they may yet use the name Orchard at some point; as of January they own it). Our OSH, it seems, is one of the ones that they plan to open.

While I was there I observed a couple of guys working in the fenced-in area that OSH used for plants and outdoor materials. The doors to the store were open, and I observed someone sitting at a table doing paperwork — it looked as if he might be preparing to conduct interviews. I also saw some evidence that work was underway to reinstall checkout stands. Outside there were a couple of guys drilling holes into the side of the building, presumably so that they can install lights, signs, or cameras. 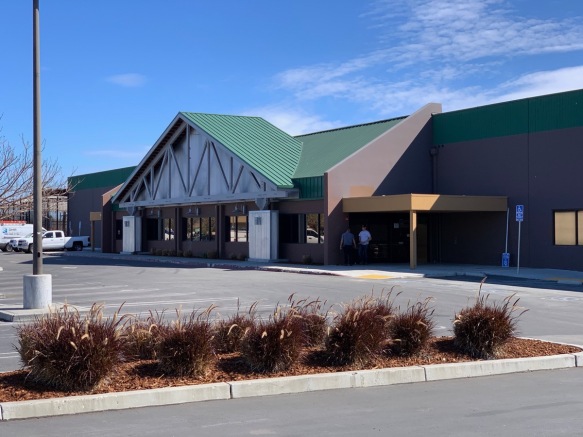 So, good news! One of our large empty retail spaces should soon be empty no longer. Although I’ve developed something of a loyalty to the Hassett Ace Hardware store in Woodside Plaza, on rare occasions they don’t have something I need so I’ll likely be using Outdoor Supply Hardware as a fallback. Anything to avoid going to the Home Depot in San Carlos…

Speaking of long-empty buildings showing new signs of life, how about the old Signarama building on El Camino Real near Broadway?

It appears that this building is being repurposed as a restaurant, one that will apparently be named “Maizz.” At this point I know nothing more than that, but I’ll certainly keep an eye on this site. Of course, with everything going on this seems to be a terrible time to be opening a new restaurant, but hopefully things will have calmed down by the time the construction work is complete. And if they do takeout — which is a good possibility given the small size of the building — they might do OK even with our current troubles. After all, even those of us who are staying home as much as possible can use a break from home-cooked meals now and again.

Then there’s the 33-unit condominium project on the former site of Honda Redwood City. The last time I wrote about them I noted that the building along El Camino Real appeared nearly done, at least from the outside, and I included this photograph:

That was more than a month ago. These days, that building looks something like this:

I’m not sure what went wrong, but the construction crew tore off major chunks of the building’s front facade and appear to have rebuilt many of the building’s balconies. Here is a close-up showing a peek beneath the wind screen: 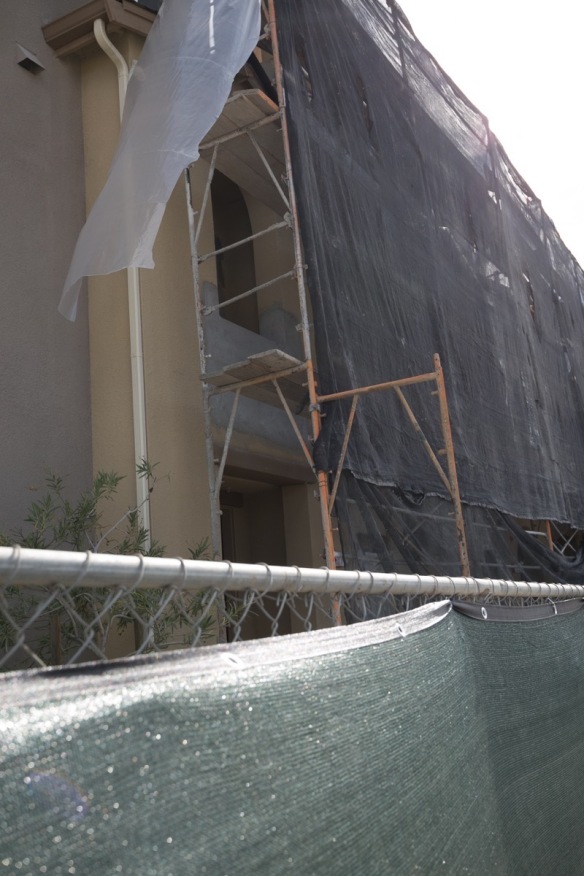 You can see the unpainted stucco beneath that second-story opening, which appears to be a shallow balcony in front of a window. I have no idea what the real problem was — perhaps the building was experiencing leaks, or perhaps they neglected to have the proper inspections done, or something — but this appears to be a rather costly fix. Fortunately the repairs appear to be nearly done, and soon the scaffolding, screening, and privacy fencing should once again be gone. I presume that whatever the issue was, they learned from it and are applying what they learned to the remaining buildings in the complex, which are at an earlier stage of completion. (The complex consists of five buildings, and the construction of those buildings is being staggered. This was the first of the five buildings to be constructed.)

Finally, thanks to an article in Wednesday’s Daily Journal, I learned that The Sobrato Organization (the folks behind the giant mixed-use development slated for Broadway Plaza) have spoken to the Redwood City Elementary School District’s Board of Trustees about a redevelopment project that would occupy not only the property where the district’s offices are currently located (at 750 Bradford St.) but also the next-door parcel at 603 Jefferson Ave. You may recall that this latter parcel is where The Pauls Corp. had at one time hoped to build an eight-story building with 92 condominiums and 4,500 square feet of ground-floor retail.

Apparently, Sobrato would like to replace the school district’s two-story office building with a six-story residential building containing 67 workforce housing units for teachers and other district faculty. Here is what the district’s building, which stands on Bradford Street directly opposite the under-construction seven-story MidPen Housing project looks like today:

To the left of the district’s office building, at 780 Bradford St., is a three-story apartment building. Directly across Bradford Street from the district offices is where the seven-story MidPen Housing project, which will contain 117 for-rent apartments for low-income seniors plus an 8,000 square foot daycare center, is currently under construction. So housing on this parcel would fit right in with its surroundings.

To the right of the district offices (and not really visible in the above picture) is the parcel at 603 Jefferson Ave. Currently it contains a small single-story commercial building that is home to UnifyID, a company that aims to “strengthen user security while elevating the consumer experience.” On this parcel Sobrato would like to build a seven-story building that would consist of 170,000 square feet of office space above ground-floor retail.

Here is one additional image of the subject properties, taken from across Jefferson Avenue:

This shows the back side of the district office (the bright white two-story building just to the right of center) and the front and side of the single-story commercial building (to the left of center). Note the MidPen Housing project, under construction, looming up in the background.

The two existing buildings are partially surrounded by surface parking. Much of that space would be consumed by the two new buildings, although Sobrato plans to retain some amount of surface parking, presumably for the retail space. Parking for the residential and office tenants would be located in a single underground parking garage, and would be shared between the office and residential uses.

This project is still in the discussion stages, and has yet to be officially submitted to the city. Even if it does get submitted, don’t expect it to get going for several years — until the city updates its Downtown plan, at the earliest.