Last weekend I had occasion to drive along Woodside Road from El Camino Real to Alameda de las Pulgas, and along the way I noticed a number of empty spaces and a couple of interesting changes. Thus, when I set out on my primary walk this week, I made sure to include Woodside Road on my route. But before I get to that, at the beginning of this week I also learned that my beloved Kristi Marie’s, the wonderful little coffee shop/grab-and-go eatery located at the corner of Broadway and Marshall Street (kitty corner from Peet’s Coffee) is closing after gracing Redwood City with its presence for almost five years. In fact, by the time you read this it will have already closed: its last day was Friday, February 28.

My wife and I had incorporated Kristi Marie’s into our regular Friday routine. On Fridays we drive for Meals on Wheels, and before heading to their kitchens in Menlo Park we first would drop into Kristi Marie’s to get coffee (for my wife), hot chocolate (for me) and an “OG”: a wonderful breakfast sandwich composed of egg, sausage and cheese between English muffins. Suspecting that there’d be crowds on their last day we got there a bit early on the 28th, and I’m glad we did: the lines were definitely longer than usual and things were selling out quickly. As it turns out, we got the last two OG sandwiches that Kristi Marie had ingredients for! 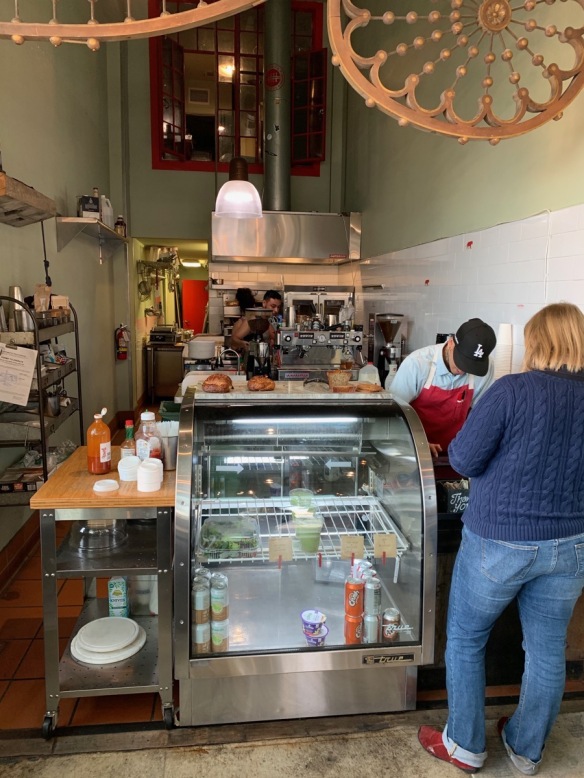 I hope to write more about Kristi Marie’s, plus about Kristi herself, her husband Zu, and their other business, BottleShop, in a future post: I’m currently working on setting up an interview with the two of them. In the mean time, I wholeheartedly endorse what Kristi Marie wrote in her farewell message: “Please keep supporting the independent shops, in Redwood City or in any city for that matter. It is all much harder for the smaller guys.” Personally I’m glad that we still have BottleShop to go to, although that is of course an entirely different business. But my wife and I now find ourselves having to seek out a new place to go for our regular Friday morning treat: let me know if you have any great suggestions. Next week we’ll be seeing how the lines and the selection are at Mademoiselle Colette — my wife likes their coffee, and we’ve had many good lunches there — but if anyone knows of any other independent places, preferably in Redwood City, that we might enjoy, please add a comment to this post.

So, Woodside Road. I began at the “western” end (it is really the southern end), at Alameda de las Pulgas, and walked towards El Camino Real. First up, Woodside Plaza. I looked in on what is intended to be the Club Pilates space and was a bit surprised to see how far behind schedule they seem to be. They had previously announced that they would be open by February 20, but they still seem to have a fair amount of work to do. On the positive side, they are at least making some visible progress. The same can’t be said for the space that will become Ralph’s Vacuum & Sewing, but then again I don’t expect visible progress there yet. According to Ralph Garcia, they’re hoping to start work on May 1, with the aim of opening in their new location just after the Fourth of July.

Across from Woodside Plaza is the recently re-opened Woodside Deli. I finally managed to have lunch there, and although I’m by no means a food critic I can say that I enjoyed my sandwich very much. And the many deli items that they sell look great. Hopefully this bodes well for this, the latest incarnation of a storied Redwood City business.

At the corner of Woodside Road and Massachusetts Avenue the Citibank building, which has been sitting empty for more than two years, suddenly has a fence around it: 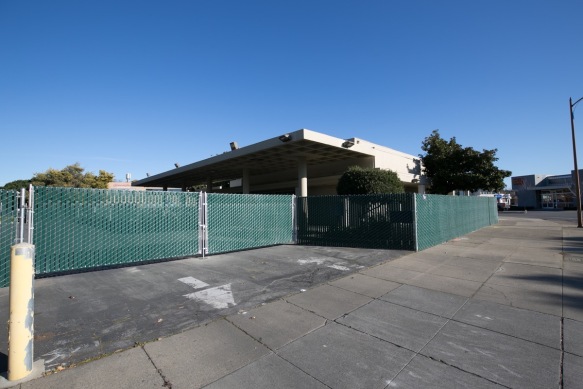 This isn’t your usual construction fencing, which tends to be temporary. Here, the poles are firmly implanted into the ground, and the material threaded through the chain link to make the fence mostly opaque is far more durable — and, I presume, expensive — than the typical polyethylene mesh netting you see on other construction fences around the city. This seems to hint that the building is going to just sit, as-is, for quite some time…

Moving down the street, I next stopped at 910 Woodside Road, home to Thaibodia, a “bistro” serving “authentic Thai cuisine.” On two separate occasions a 10-unit condominium project has been approved for this site, and yet Thaibodia continues to do business here. The developer of the condominium project apparently has yet to receive their building permits, which certainly would explain the lack of construction activity. I will note that, unlike with many projects we see around the city, Thaibodia is being allowed to continue in operation seemingly until the last minute. Kudos to the property owner for that: too many times when a project is approved (or sometimes, even earlier) the existing tenants are kicked out and we are left staring at empty retail spaces for months or even years before the project gets going. 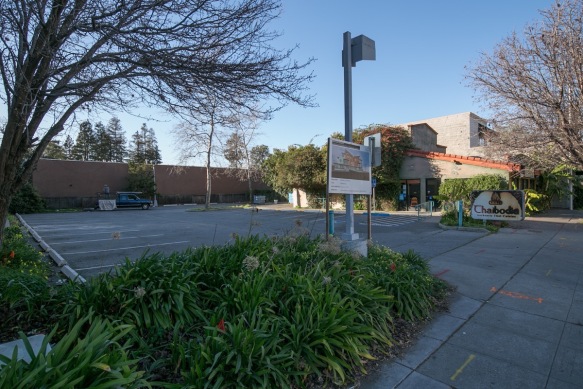 Further down Woodside Road, the small drive-thru that last was Espresso Lane continues to remain idle. Espresso Lane closed around the end of June 2018 and has been sitting empty ever since. No one has proposed any projects for the property, so presumably the owner is continuing to try to lease the space.

Next door, Redwood Chapel — a funeral home — recently closed. The building is being advertised as a potential restaurant, retail, or office space. It actually does look like it would make a nice high-end restaurant, at least from the outside. I’m not sure how much work it would take to renovate the interior, though.

The building itself looks to be in good shape, and it sits on a fairly large parcel: just shy of a full acre in size. There are some outbuildings along the back of the property, but the rest is simply a good-sized surface parking lot. So I’m guessing that if the owner doesn’t find a tenant, they may instead find themselves receiving offers from developers interested in doing something entirely new with this property.

Now, for something new: 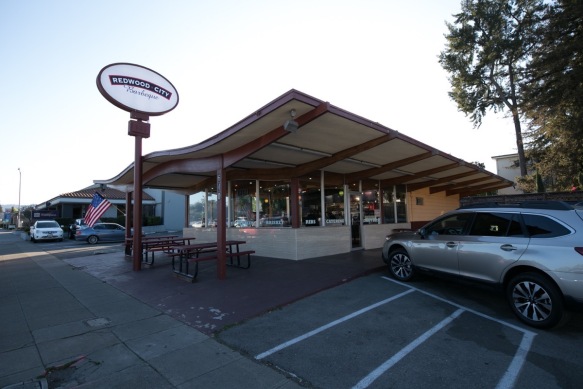 Just a couple of weeks ago Ohana Express (which previously had been a Dairy Queen) became Redwood City Barbeque. I didn’t go in on the day I took this picture, but went back later in the week with my wife to give it a try. We had a nice lunch, sitting outside on the bench tables in front.

Redwood City Barbeque should be a nice addition to Redwood City’s rather limited barbecue scene. These folks serve a wide variety of meats, either as sandwiches or as meals, which come with your choice of two sides and a slice of garlic bread. Using a smoker that sits in the parking lot they prepare tri-tip, brisket, pulled pork, pork ribs, chicken, and hot links. They have the usual sides: beans (which tasted to us more like a somewhat spicy chili), coleslaw, potato salad, and the like. They also serve beer, although my wife and I settled for iced tea. Oh, and for those folks who still miss the old Dairy Queen, they continue to serve shakes, floats, soft-serve cones, and chocolate-dipped soft-serve.

We were there on Wednesday at noon, and they were doing a really good business. All of the inside tables were full, and by the time we left the outside ones were all pretty much full as well. Fortunately they also do takeout, something that many of the customers were taking advantage of.

As someone who enjoys good barbecue, I’ll definitely be back. Sometime I might have to do a proper comparison between Redwood City Barbeque and places like Old Port Lobster Shack, which serves a variety of barbecue items in addition to its many seafood items at both its Woodside Plaza and downtown locations.

Continuing down Woodside Road, I came to the Hudson Street intersection. Here, the Shell gas station has been completely torn out. The two signs along the Woodside Road side of the property still stand, however, signaling that they are probably just building an all-new gas station here.

Across Woodside Road from the missing Shell station I peeked into the Dunkin’ (doughnuts) space. I have no idea what is taking them so long to convert what was a dry cleaners into a Dunkin’ store. I managed to get a look inside, and the space seems ready for fixtures and cabinets: 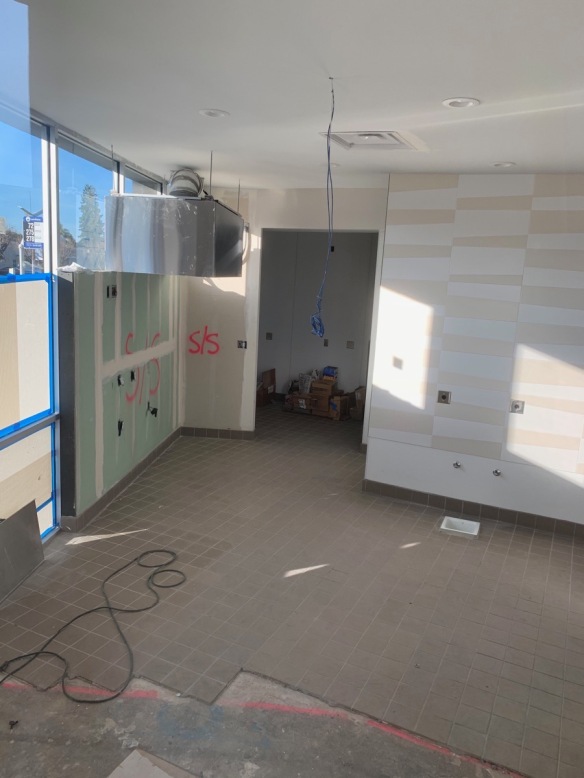 I haven’t noticed any activity here for quite some time, but that might just be that I haven’t been by when work was going on. This transformation has been going on for a full six months now, something that normally shouldn’t take so long. Then again, if the former tenants were actually doing dry cleaning on this site (as opposed to an offsite location) the site most likely had to be cleaned and cleared by the EPA, which would account for at least some of the delay.

Just down from the Dunkin’ store I just had to take a peek at the Hallmark House Apartments building. Building permits have finally been issued for this long-idle project, and the city’s latest blog post on the subject says “construction is expected to commence in May 2020 with an anticipated completion date of June 2021.” I didn’t really expect to see any activity yet, and I didn’t. But I’ll keep watching! I’ve been keeping an eye on, and writing about, this 72-unit affordable housing building since July of 2013, when a fire resulted in some 75 residents having to scramble to find new homes.

I didn’t see much to write about on the rest of my walk to El Camino Real. I did see some things on El Camino Real itself, but I’ll hold those for another post. I do want to mention one other empty space along Woodside Road, one that I didn’t get to on my walk that day but noticed later in the week. The Broadway Plaza project seems to be moving ahead, not so much on the main site (although I’m starting to see some activity there as well) but on the site across Woodside Road that is slated to become our new CVS drug store. This site: 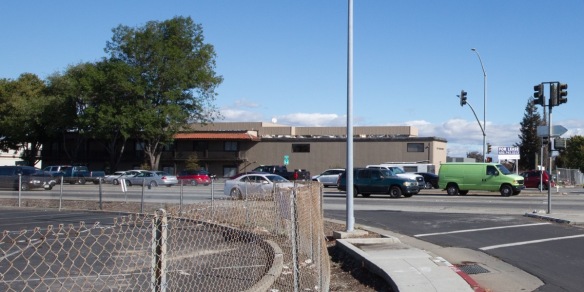 The above is an older picture showing what was on the site. Go by there today, however, and it looks very different. That small two-story office building (which sits right next to Redwood City’s Smart & Final store) is now completely gone. This is an essential early step in the Broadway Plaza project, since the CVS drug store on the main site will remain open for business until they can move across to their new location. And that means that although the three residential buildings that will make up part of the Broadway Plaza project can begin construction just as soon as any needed soil remediation has been completed, the three office buildings will have to wait until CVS has moved. Thus, the removal of this office building is the first in a sequence of steps that will result in the three new office buildings being built behind the Denny’s and Jack in the Box restaurants located at the corner of Broadway and Woodside Road.

It’s interesting how many things one can find by walking along just one of Redwood City’s major streets. The big projects tend to grab one’s attention even if you are just driving by, but try getting out and walking: you’ll be amazed at what you discover. In particular, watch the empty spaces, and, like me, be among the first to learn what new things are coming to Redwood City.

27 thoughts on “Watch This Space”