Things are fairly quiet in Redwood City at the moment. Not that there isn’t a lot going on, but that the ongoing projects continue to, well, go on, and projects in the planning stage are all still in the planning stage. There was a Planning Commission meeting this week, but it was a relatively quiet one (it ran less than an hour and twenty minutes, which is quite a rarity). The Planning Commissioners did give their input on what should be included in the Environmental Impact Report (EIR) for the South Main Mixed-Use project, and that serves as a reminder that if any of you want to suggest areas that should be considered when studying how this large project could potentially impact life here in Redwood City, now is the time to do that. Comments need to be submitted to the city by the end of next week: by Friday, February 28. Submit your written comments to Lindy Chan (the Principal Planner assigned to this project) at lchan@redwoodcity.org or 1017 Middlefield Road, Redwood City, CA 94063.

For reference, the South Main Mixed-Use project is the six-building office and residential development being proposed by Greystar Development for the blocks occupied by Hopkins Acura, Towne Ford, the now-shuttered Redwood Roller Rink, and Main & Elm (this last hopes to occupy a space in the new development, assuming that it actually gets built). The proposal has been altered several times since its initial inception. As currently envisioned it would include 530,000 square feet of office space (down a bit from the previous proposal); 540 residential units, 147 of which would be affordable at a variety of income levels (both figures are up significantly from the previous proposal); about 29,000 square feet of retail; and an 8,400 square foot child care facility. The development would also include a seventh building at 1304 El Camino Real (just about a block south of Jefferson Avenue) that would contain 39 of the affordable units. Within the project would be about 40,000 square feet of public open space, some of which would run between Redwood Creek and the development, from El Camino Real to Lathrop Street. The biggest chunk of open space would be located around the metal Perry’s Feed shed located at Shasta and Chestnut streets. The metal shed itself would be recreated as some sort of retail space — most likely a restaurant.

The above rendering shows the main part of the project as viewed from the south end, looking north. El Camino Real runs along the left edge of the picture. The Perry’s Feed shed ls the small pink building near the lower-right corner of the image. The two buildings towards the back in the left half of the image are the residential buildings; the remaining four are office buildings (with some retail within). The childcare center would be located in the leftmost of the buildings in the foreground: behind the trees in front of that building is a small grass area that would be a private garden dedicated to the childcare center.

You’ll hear much more about this project in the months and years to come, and will have many more opportunities to comment on the merits of the project itself. For now, the city will be preparing a report on the proposed project’s environmental impacts. With that report in hand, we will all be able make a more informed decision as to whether or not this is a project we want to see in Redwood City.

This week I dropped by the site of the Magical Bridge Playground, which is being constructed on the Valota Road side of Red Morton Park. Various delays (some related to weather) have caused the opening date to be pushed back. The Magical Bridge Foundation now anticipates that it will be complete and open to the public sometime this spring. Although the play equipment and the playhouse have yet to be installed, the project is certainly looking impressive:

They’ve already started planting some of the new trees, and appear to be taking good care of the ones that were preserved during construction. And the Redwood City Parks and Arts Foundation has gotten in on the action: they’ve commissioned a local artist who is designing what appears to be an absolutely gorgeous mural for some of the playground’s the concrete retaining walls. The mural will be implemented as a mosaic, and will “depict the natural beauty of native California Flora and Fauna.” They’re looking for sponsors to help defray the costs (sponsors will be recognized on a plaque near the mural). For some images of what the finished mural might look like, and for a link through which you can donate, see the Redwood City Parks & Arts Foundation web page.

Although it isn’t actually in Redwood City, as the article’s title states, I want to bring your attention to a recent article in the San Jose Mercury News by which I learned of the likely closure of the Bayshore Villa mobile home park at 3499 East Bayshore Road (on a small parcel of unincorporated land that probably should be in Redwood City). The parcel sits close to Highway 101 on the bay side of the freeway, just up from Marsh Road. 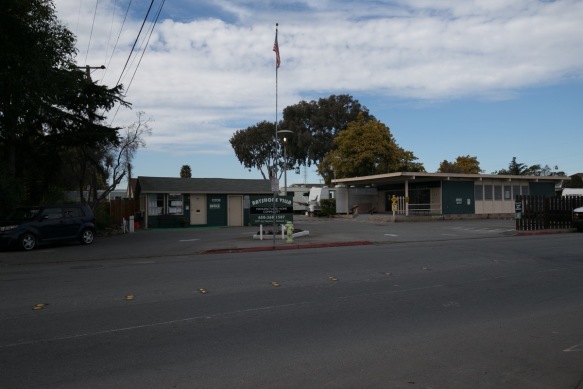 According to the article, the company that manages the property “recently told residents it’s moving forward with conversations started four months ago to sell the mobile home park to a developer who plans to build an apartment complex there.” Given that many of Bayshore Villa’s residents are low-wage workers or retirees, if forced to move they have few good options. Plus, some of the residents own their units and lease the space upon which the unit sits. Thus, if forced to move they’ll have to find another park that can accommodate their trailer. In our current environment, that can’t be easy.

Supervisor Warren Slocum is on the job, and hopefully the county can work something out that’ll keep these folks right where they are. Mobile home parks are an important part of our housing picture, a part that we can’t really afford to lose. Over the last couple of years two large luxury housing developments were constructed along East Bayshore (pretty much across from the Porsche dealership that you can see from the freeway) so it’s no wonder that developers are starting to explore the area for potential project sites. Fortunately, it appears that the county has some time, and perhaps some political leverage. But we all should keep watching, and support the residents of not only this park but any others that are threatened in the future as well.

One thing that was not so quiet was last night’s meeting at Redeemer Lutheran School at which the city presented the results of the survey on the pilot design of the Hopkins Avenue Traffic Safety Project. Although it was intended as a meeting in which the city would simply present the results of the survey and of the traffic studies that were done (these were posted on easels; there was no formal presentation), and where they would show off some changes that they are proposing based on those results, the room quickly filled with people who seemed eager to express their opinions. The city has yet to post those results to the project web page, so if you are interested and weren’t able to attend last night’s meeting, keep an eye on the web page for updates. I also expect that the results will be presented to the City Council at some point, so you might also watch out for that.

One last head’s up: at next Monday’s meeting the Redwood City Council will consider initiating proceedings to amend the Redwood City General Plan and the Downtown Precise Plan (DTPP) in light of the creation of a new Transit District (around Redwood City’s Caltrain station) and of the proposed redevelopment of the Sequoia Station shopping center. Amending these plans would be the first in a long series of steps that could conceivably see the shopping center replaced with some sort of mixed-use development, perhaps along the lines of what Lowe (a property developer) is proposing. Note that Lowe has yet to actually submit any concrete proposals. Also note that they have already amended their initial trial balloon: they’re deleted the 17-story building from their rough proposal, and are apparently agreeing to abide by the height limits as currently laid out in the DTPP.

The discussion during next week’s meeting should be interesting. Feel free to attend in person, or at least watch online (you can do so here, either live or after the fact).

7 thoughts on “All’s Quiet on the Redwood Front”