Aloha! Early this week I returned from a ten-day trip to Hawaii. The weather was great, with 80-degree days and only a small amount of rain. The state of Hawaii is a lovely place to visit, although truly I wouldn’t want to live there. But of course I’m extremely thankful to be able to visit.

I wouldn’t want to live in Hawaii, but I’m of course delighted to live here in Redwood City. Although, coming back late on Sunday night to temperatures that were in the 40’s did give me a moment’s pause. Regardless, our recent daytime temperatures are comfortable enough, as long as one wears the appropriate clothing. And when I get moving, as I did when I took a walk to see what I might have missed while I had been gone, I get downright comfortable.

This week’s walk took me first to the 33-unit condominium complex going up where once Honda Redwood City did business. The complex will ultimately consist of five separate buildings, but those buildings are being built in an overlapping sequence. From the street the first building, which fronts onto El Camino Real, looks nearly done.

Presumably work continues to finish off that building’s interior. Nearby, the second building, which stands perpendicular to the first and is located along the property line that this parcel shares with the next-door American Legion Post, appears fully framed and sheathed, ready to be prepped for stucco.

Finally, thanks to this project, this week some of you may have had to deal with a bit of extra traffic nonsense on El Camino Real at Hopkins Avenue: as part of the project, three of the intersection’s four corners were to be rebuilt, and indeed the two corners on the project side of El Camino Real already have been. Now, work on the third corner has begun:

The new corner will “bulb out” to the pink lines drawn on the street. This will have a number of benefits, primarily (for me, on foot) lessening the amount of time I’m actually in the street when crossing at this intersection. In the interim, though, I of course cannot cross here.

I next followed the arrow towards downtown, on my way swinging by the small project at 55 Perry Street. However I saw no activity and thus have no progress to report on that project. Over at 821 Winslow St., though, the former home of Pizza and Pints (and, before that, Pizza and Pipes) is looking really good:

They’ve turned what over the last several years was a somewhat grungy building into something that looks pretty classy. I particularly like the brick that is now framing the entrance (click on the above image for one you can zoom in on). I also like the trim colors, used on the crown molding up top and around the four new windows installed on the building’s front facade. This building is looking more and more like it is becoming office space.

Over on Bradford Street, the Arroyo Green project is humming right along. With the first two concrete levels (which will largely be a parking garage) solidly in place, the upper five floors are now quickly being constructed using conventional wood-framing: 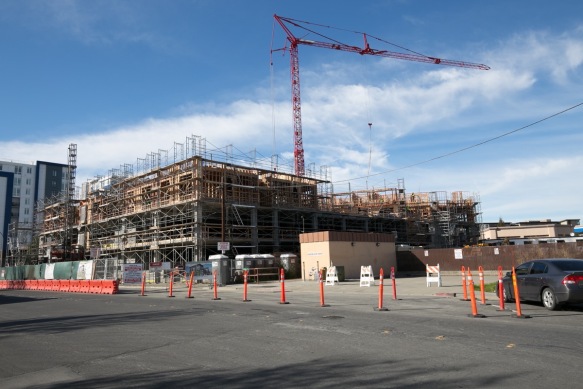 Ultimately this seven-story building will contain 117 apartments for seniors at the Very Low affordability level. On the ground floor, facing Redwood Creek, it will also contain an 8,000-square-foot daycare center. And there will be a path along the creek in front of the building, open to the public.

One day we’ll hopefully have a continuous trail that follows the creek from downtown out to the other side of Highway 101, with the path that is being built as part of the Arroyo Green project as part of this trail. Another portion will be constructed as part of the 353 Main Street project, which is underway on the other side of Veterans Boulevard, beyond the Carl’s Jr. and Sakura 2 restaurants. Unfortunately that project’s section of the path will not extend beyond the project boundaries — although it will connect to the one very short section of path built some years ago as part of the next-door Township apartment building. Hopefully the city can and will put some pressure on the folks who own the Sakura 2 and Carl’s Jr. buildings to extend the path (or let the city extend the path) out to Veterans Boulevard. As for heading in the other direction, towards Highway 101 and the underpass that the city is having built there, the city is doing what it can: 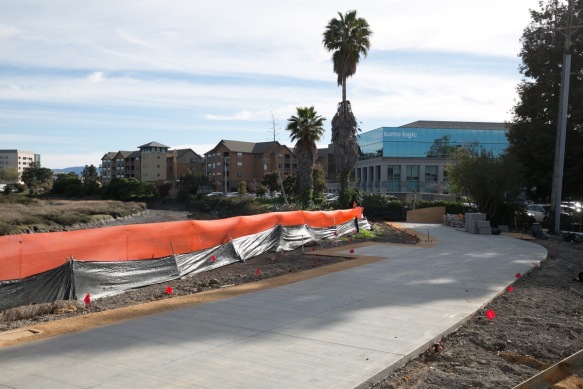 You can’t walk on this yet, and in any case it doesn’t really go anywhere, but this part of the trail is turning out very nice. Unfortunately, between this segment and the one behind the Township apartments (the building to the left of the two palm trees in the above picture) is the office building with the glass upper floors (home to “Sumo Logic,” apparently). In order for the path to connect it seems that part of that building’s parking lot would have to be removed, which I’m guessing isn’t happening any time soon. So for some time we’ll be left with a handful of short, unconnected segments that only a couple of die-hards such as myself will use.

Speaking of the Highway 101 underpass, work there seems to have stopped, at least temporarily.

I wasn’t able to use the underpass, of course, to cross the highway, but fortunately there is a serviceable path on the other side of the creek. Some time ago the homeless people who lived under there were rousted out, and for a while the way was clear. At least one person has moved back in, but they are far enough off the path that you can walk by without causing a stir. Otherwise you need to cross over the freeway either at Whipple Avenue or Maple Street, either of which involves a lot of extra walking. I elected to take the direct route, both so that I could check on the underpass’s progress, and so that I could check on Docktown.

Docktown, as you probably know, is the floating home community that for years existed along this part of Redwood Creek. Although there may be a small number (likely, in the single digits) of people still living there, Redwood City, who is charged with managing the creek and who is operating under the legal understanding that private homes are not a proper public use of the creek, has been working to relocate the former residents. Much of this involved buying the floating homes and demolishing them (the city has had only limited success in selling them). For a long time many of the homes continued to sit, boarded up and unoccupied, making Docktown still look somewhat like it always did. But the city is finally making real headway on removing or demolishing the floating homes and boats: today very few remain. Back when it was a thriving community, Docktown looked like this (this picture was taken in December 2017):

(Note that the tide was out when I was there; that is a normal part of the cycle of Redwood Creek.) Here is a view looking the other direction, back towards Highway 101:

One or two Docktown residents continue to fight for the right to live there; seemingly it is up to the courts to decide its ultimate fate. But even if some measure of floating homes are allowed to remain, it seems pretty clear that what once was Docktown will look, and be, very different from what it once was. Aloha, Docktown…