There are a number of building projects around the city at various stages of development. This week I looked in on a couple of projects that are just approaching the foundation stage. Because my wife and I drive for Meals on Wheels, we end up making a weekly trip down to Menlo Park (where the food is prepared). Along the way I keep an eye on the various projects going on along El Camino Real between Redwood City and the far side of Menlo Park. One that I’ve been waiting for recently put up construction fences, and this week I noticed heavy equipment on the site starting the demolition phase. Thus, earlier this week I grabbed my camera and headed down to the corner of El Camino Real and East Selby Lane in order to take a good look.

The above picture shows two excavators, one of which had just begun tearing into the building that most recently was the home to John Bentley’s restaurant. This particular project spans six parcels, giving the developer a total of 1.4 acres to work with. Most of that space had been paved and used for surface parking lots, both for the John Bentley’s building and for this small office building at the corner of El Camino Real and East Selby Lane, which will also be torn down:

Three of the parcels are along El Camino Real, while the remaining three are in the rear, on Markham Avenue. Only one of these rear parcels had anything on it; that one had a small single-family house that apparently was the first thing to go:

If you look carefully beyond the pile that was once the small house (click the image for a version you can zoom in on) you can see that although the house is gone, the brick chimney is still standing. Perhaps the chimney is to be taken down more carefully, so that the bricks can be recycled. After all, used bricks are in demand these days.

Once the property has been entirely cleared, the heavy equipment will get to work preparing the site for the new building’s foundation. So just what will they be building? A Sunrise Senior Living center. Sunrise has a number of senior communities in our area, and I assume by this project that they are doing well. This particular center will be a residential elderly care facility providing assisted living services for as many as 127 residents. The building, which will vary between two and three stories in height, will contain 90 residential units: 53 studios, 19 doubles, and 18 semi-private units. It will sit above an underground garage that can accommodate 63 vehicles. There will be gardens behind and alongside the building, helping to provide a small buffer between the residential care facility and the neighborhood of single-family homes that are located immediately behind. There will also be a small rooftop garden on a portion of the building’s roof, providing additional outdoor space for the building’s residents and staff.

Based on the renderings provided to the county (this project is located a short way beyond the Redwood City border, in North Fair Oaks, and thus falls under the county’s jurisdiction) along with the preliminary plans, the resulting building should be a fairly attractive one:

The above view shows what the building will look like from the corner of El Camino Real and East Selby Lane; this is pretty much the same view as the picture I included earlier. Note the garage entrance along the right side of the building; resident vehicles will enter and exit the garage through this opening, from East Selby Lane. Delivery vehicles and the like will not use this entrance, but instead will access the “back” of the building using a separate driveway that comes off of El Camino Real. This driveway will separate the Sunrise facility from the next-door Planned Parenthood building, and will run right through where the John Bentley’s building stands today.

Note that this project should not be confused with the nearby project that is by now well underway a block or two to the north, next to the former Eco Green Auto Clean car wash on El Camino Real. There the developers are building a four-story affordable housing project on the site that previously housed an Enterprise Rent-A-Car facility.

After walking all around the Sunrise Senior Living center site in an attempt to get good pictures of the action, I next headed over to the corner of Harrison Avenue and Cleveland Street, where California Communities’ Harrison Avenue project is well into the demolition phase. If those street names aren’t familiar to you, Harrison Avenue meets El Camino Real alongside Roy’s Drive-In Cleaners and our Whole Foods Market, and runs west to where North Star Academy and McKinley Institute of Technology are located. The Harrison Avenue project is located towards the west end of Harrison Avenue, across from North Star Academy. California Communities is tearing down seven single-family homes (and one accessory dwelling unit!) and in their place plans to construct 17 three-story townhomes.

As you can see, the houses are largely gone; only some of their foundations remained when I was there. The above picture was taken from the alley that runs parallel to Harrison Avenue and looks across the property towards Harrison. Note the school buildings in the background.

The townhouses will range from 1,532 up to 1,924 square feet in size. All will be townhouses, meaning that their two-car garages will be on the ground floor along with their main entry, and the bulk of the living space will be on the second and third floors. Depending upon the configuration, the ground floor might also have either a bedroom and bathroom, or a den. The largest units are slated to have four bedrooms, while the remainder have three. All units will have an entry porch and a small second-floor deck.

California Communities has obviously received permission to tear down the existing homes, but has yet to receive building permits for the five new buildings that will make up this development (which is actually identified as “515 Cleveland St,” incidentally). Thus, don’t be surprised if this soon-to-be-empty lot sits empty for a while.

While I was in the area, I ran over and checked on a similar, but smaller, project that is slated for three parcels at the corner of Vera Avenue and Adams Street. This project, which was approved by the Planning Commission last December, completed its demolition in June, but since then the site has sat idle. A lot of weeds have grown up since then…

The developers have applied for construction permits, but those are still under review. I’ll write more about this project once it is underway, but for the record the idea is to build ten townhomes on this property, arranged in two rows of five with a central driveway.

Lastly, I headed over to the other side of Highway 101 in order to check on the progress of the mighty 1548 Maple Street (Strada) project. This is the 131-unit townhouse project that will be built along Redwood Creek on the bay side of Highway 101. Demolition of the few buildings that had existed to serve the residents of the adjacent Docktown Marina was completed some time ago, and ever since then various pieces of heavy equipment have been piling up and then moving around soil, in an effort to raise the site and fortify it against projected sea level rise.

Because of its proximity to the bay, of course, this project requires a great deal more site preparation than the others. Grading of the site is anticipated to take a full 12 months, so it’ll be a while yet before the project moves into the phase where building foundations are constructed. All told, construction of this project should take some 33 months, or just shy of three full years.

If you are interested in watching heavy equipment do their thing, you can get pretty up close and personal right now: 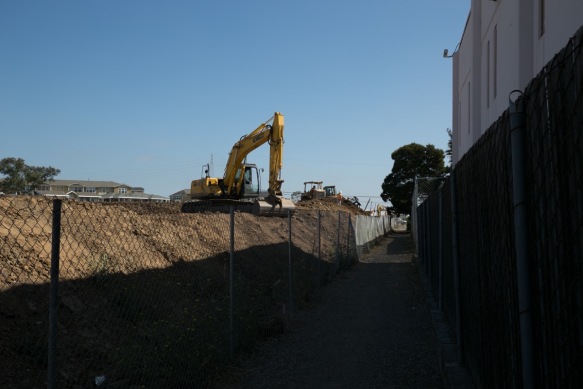 While I was in the area I naturally checked in on the Highway 101 Pedestrian Undercrossing project. Although I did remember to bring my long lens with me this time, getting a good photo of the progress thus far is still a bit tricky. But as you can see, the new pathway beneath the highway, which will run from the end of Main Street to the traffic circle in front of the Boardwalk Auto dealerships, is coming right along:

(That pile of dirt in the foreground makes it hard to see just how deep the pathway has been dug, but it’s looking very good.) Personally, I can’t wait for this project to be completed; I’ll certainly be making good use of it to get back and forth. Of course, I’m sure that many, if not most, of the folks who currently live out on that side of the freeway will be even more excited than I. This pedestrian and bicycle path will give them an easy way to get to downtown.

Development in Redwood City continues apace. Although the large projects, such as the giant Greystar IV apartment building being built at 1409 El Camino Real, tend to get most of the attention, there are a number of smaller projects such as those on Harrison and Vera Avenues and some relatively out-of-sight projects such as 1548 Maple Street that are also worth monitoring. These may be just approaching the foundation stage, but will provide some much-needed for-sale housing to a city that desperately needs it.

3 thoughts on “On a Firm Foundation”