It’s funny: I never would have anticipated, back when I first started this blog, that one of the biggest challenges would be to constantly come up with unique titles. I like to make them somewhat whimsical, relevant to the main topic of the post, and unique. After nearly 270 blog posts (this one is number 268), continuing to make them unique causes me on occasion to have to wrack my brain to come up with something new. Because unique titles are my top priority, with being relevant a close second, I don’t always succeed at making them properly whimsical. I guess that’s just the price of success…

This week I elected to spend the best part of a day walking around Menlo Park, checking in on the great many projects that are currently underway down there. I largely focused on projects that are on or near El Camino Real, plus a couple of projects in the vicinity of the intersection of Marsh Road and Bayfront Expressway (Highway 84), figuring that many of you occasionally drive through these parts of Menlo Park and probably wonder what all the buildings are about.

First up, allow me to begin with Stanford’s Middle Plaza project, down near Menlo Park’s border with Palo Alto.

The work on this 8.4-acre parcel is going slowly, but it is indeed proceeding. The lot has been graded and leveled, and it appears that some basic utility work has also been done. Those two piles of material clearly visible in the above photo are fairly new, and although they’re not terribly visible due to the length of the property, at the far end, down by the Stanford Park Hotel, there are a handful of backhoes and other heavy equipment.

I’ve written about this before, but in case you haven’t read that, or simply don’t recall, this project will produce “approximately 10,286 square feet of retail/restaurant, 142,840 square feet of non-medical office, and 215 residential units.”

After taking pictures of Stanford’s nearly empty lot, I next headed up towards the intersection of El Camino Real and Ravenswood Avenue (near Kepler’s Books), where a handful of projects are in various stages of development. The first is not actually on El Camino Real itself, but is pretty visible from there: the office/housing development being constructed at 650 Live Oak Avenue. 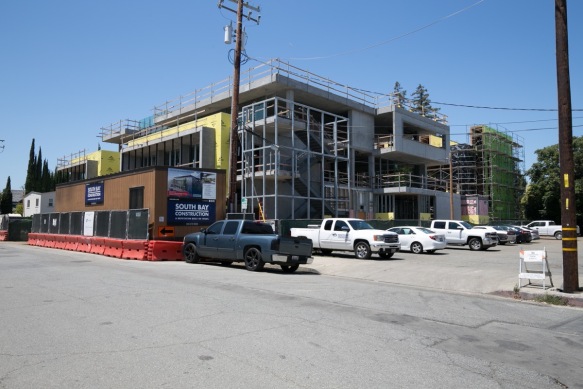 Plans call for 17,000 square feet of offices and 17 for-rent housing units organized into one three-story combination office/residential building (visible above), one three-story apartment building (towards the right side of the picture), and a pair of two-story apartment buildings (located to the left of the office buildings, but not visible, in the above photo). There is apparently a two-story parking garage beneath at least some of the buildings. And of the 17 apartments, two of them will be affordable.

Heading up El Camino Real, I came to the biggie: the Station 1300 project. This project, which sits on 6.4 acres near the corner of El Camino Real and Oak Grove Avenue, will result in approximately 220,000 square feet of “commercial uses” (office, restaurant, and retail) and 183 dwelling units. All of this will sit above a massive subterranean parking garage. So far, the garage has been constructed, and the buildings are being framed. The first of the “commercial use” buildings is rising at the northern end of the property, and is being framed with steel:

The residential buildings, on the other hand, are being built at the Oak Grove Avenue end of the property, and are being framed with wood:

Across the street there are two smaller projects underway. One is at 1275 El Camino Real, which is the former site of the Park Theatre. The contractor is building a three-story building that will contain four condominiums plus office space and a small retail storefront. 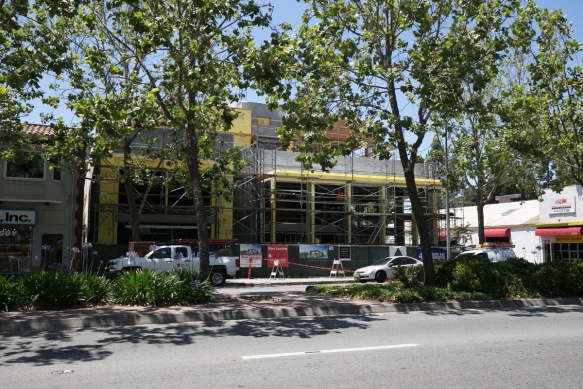 Two doors down is the other project, one that is nearly done. When complete it will consist of a three-story building with approximately 1,906 square feet of commercial space and fifteen apartments. It sits on two parcels — 1281 and 1285 El Camino Real — and has a nice design, with a “bridge” connecting what otherwise would be two separate buildings:

The fifteen apartments in this development are all two-bedroom, two-bathroom units, and all appear to be about 1,000 square feet in size.

After checking out the projects directly along El Camino Real, I headed back towards Kepler’s. There are two additional projects very near that store that are within a block of El Camino. First up, the project at 505/556 Santa Cruz Avenue: 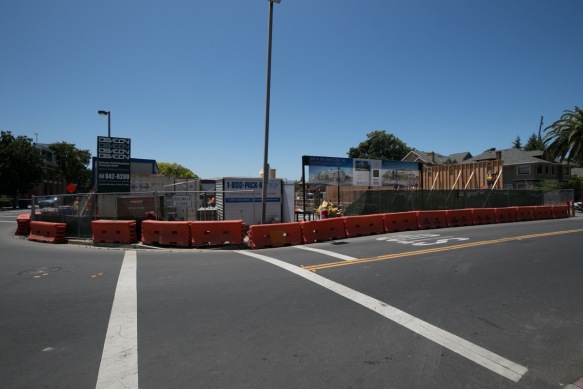 You may well be familiar with Santa Cruz Avenue, but know that this project is on the Caltrain side of El Camino Real. Indeed, I took the above picture while standing close to Menlo Park’s Caltrain station. This project actually consists of three buildings on three separate parcels, two of which will stand upon a two-level underground garage. Towards the right in the above photo, where the new wooden wall currently stands, will be a four-story building that will contain a parking garage and some office space on the ground floor, more office space on the second floor, and two side-by-side, multi-level apartments occupying levels three and four. Each apartment will have two bedrooms, and each will be just under 1,700 square feet in size.

Along Santa Cruz Avenue (which is along the left edge of the picture, above) there will be two buildings. The first, which will sit at the corner, will be four stories tall and will contain about 10,500 square feet of office space, a 3,600 square foot cafe, and, entirely on the fourth floor, three dwelling units with varying sizes and configurations. The second building will stand end-on to Santa Cruz Avenue, and will be closer to El Camino Real. It will be three stories tall, with a small (1,050 square foot) retail space on the ground floor, some 6,700 square feet of office space on the second floor, and four dwelling units, again of varying sizes and configurations, on the third floor.

Crossing the Caltrain tracks and wandering over towards Ravenswood Avenue brought me to the project that is closest to completion: the office building that will house the Schmidt Family Foundation, at 1020 Alma Street. According to Wikipedia, the Schmidt Family Foundation is “a private foundation created in 2006 by Eric Schmidt, the Executive Chairman of Google, and his wife Wendy Schmidt, to address issues pertaining to sustainability and the responsible use of natural resources.” The building they are constructing is three stories tall, with two levels of underground parking. The building itself looks basically done, with landscaping now underway along with work on the building’s interior.

As one might expect for a building being constructed for such a foundation, the aim is to make the building generate as much energy as it uses over the course of the year (it does, or will, have a number of solar panels on the roof, for one thing), and the plan is to achieve a LEED Platinum level of certification, which is the highest level for a so-called “green” building.

At this point I hopped in my car (although I walked throughout Menlo Park, I hadn’t walked to it from Redwood City) and headed up to Marsh Road, where I then drove over Highway 101. I managed to find a space to park, one that was well-located for an exploration of the area on foot. Although I primarily intended to check on the progress of the giant Menlo Gateway project, my attention was first caught by another nearby project: the new home of the new TIDE Academy.

This fascinating campus is set among the many light industrial buildings in the area, and can be found at 150 Jefferson Drive in Menlo Park. TIDE stands for “Technology, Innovation, Design, and Engineering,” and according to their website it is “a small school that prepares students for STEAM careers through Computer Science, Early College Program, four-year math requirement, and interdisciplinary curriculum centered around design thinking and project-based learning.” TIDE Academy is part of the Sequoia Union High School District, and is not a charter school. It is in fact a small (with 115 students in this fall’s inaugural class, and an expected 400 students once the school is in full operation) public school with a very tight focus. Some college courses are being offered on the campus, meaning that students have the opportunity to complete up to two years of college while earning their high school diploma.

Turning to the Menlo Gateway project, most of us are well acquainted with its first phase, which resulted in a modern eleven-story hotel and an eight-story office building both flanking a multi-story surface parking garage, all lined up along Highway 101 just south of Marsh Road. These buildings are located between the highway and Independence Drive, on what the developer terms the “Independence Site.” Close by is the “Constitution Site,” a similarly sized parcel located between Constitution Drive and the Bayfront Expressway, which is also known as Highway 84. Phase II of the Menlo Gateway project is nearly complete on this second parcel, as you can see here:

Here the configuration is a bit different: this part of the project consists of two side-by-side eight-story office buildings flanked by a pair of multi-level parking garages. The above view shows the Bayfront Expressway side (from the Chrysler Drive end). The buildings and the garages will be accessed from Constitution Drive, however, a side of the project with a similar appearance:

The two office buildings are nearly identical in size: both are about 250,000 square feet. In total the two garages can park just over 1,500 cars, and there is parking for an additional 145 cars in two surface lots.

All told the two phases of the Menlo Gateway project supply some 700,000 square feet of office space along with the roughly 175,000-square-foot hotel and the nearly 70,000-square-foot “Club Sport”. Clearly this is a substantial project. My understanding that Facebook is already occupying the office building on Independence Drive, and apparently also plans to occupy both office buildings on Constitution Drive. Given the development’s close proximity to Facebook headquarters (which are just a short drive down the Bayfront Expressway), this should surprise almost no one.

Thanks to the San Mateo Daily Journal, I learned that Martin’s West, the Scottish-themed “gastropub” at 831 Main Street in Redwood City, will be ending its 10-year run on Saturday, June 22. Before anyone panics, though, know that just two days later, on Monday, June 24, the restaurant will reopen as Alhambra Irish House (it is located within the historic Alhambra building) with, as you might guess, an Irish theme. The transition will apparently be a gradual one, with the menu showing few changes at first. But expect the restaurant to grow over time to resemble the St. Stephens Green Irish Pub in Mountain View, the owner of which is the new owner of Alhambra Irish House. Personally, as someone who has a real fondness for Guinness stout, I’m delighted with the change, and look forward to giving the new place a try.

The Fourth of July is nearly upon us, and that of course means that Redwood City will be putting on its usual parade, festival, and fireworks show. I’m not going to even begin to list all of the many activities that will be taking place on that day; I’ll leave that to the folks organizing the various events. Fortunately, everything you need to know can be found beginning on a single web page: www.parade.org.

2 thoughts on “Walking Down South”