The phrase “a man’s home is his castle” is used as shorthand for the Fourth Amendment’s guarantee of one’s right to be secure in their own home (and these days, other places, such as their cars), and to prevent unreasonable searches and seizures. I generally stay well away from politics on Walking Redwood City, though, and this post is no different. I’m using the phrase as a title for something significantly more whimsical: on my walks around Redwood City I’ve encountered a number of homes that literally look like castles, or have elements that remind one of a castle, and this week I thought I’d keep things light and show you a couple of them.

[And before anyone gets their dander up, I should also note that even though this phrase uses the words “man” and “his,” I’m well aware that there are many, many women who own homes in Redwood City, and that some of them probably love the idea of living in a castle, too. Although I’m using the phrase as is, because that’s the traditional version, I freely acknowledge that it really should be more inclusive.]

The more interesting aspects of a stereotypical castle — moats and drawbridges, or gatehouses and battlements — make no real sense for a house, and thus aren’t really what I’m finding out there. What I am finding are round towers, or at least houses with noticeably round elements. And some houses are covered in stone, further evoking a medieval look — although that particular feature is rare, of course.

I’ll begin with one that I’ve written about before, but long ago. I stumbled across this house at 829 Edgewood Road back in early 2016, when it was first undergoing reconstruction. The house itself was interesting, but what really caught my eye was the tower, nestled up against one of the wings of the house:

When this project was undertaken, the house that previously stood on this spot was almost completely torn down. The one element that they preserved from the original house, along with the framing that defined the front entrance, was that tower. Here is a picture that I took shortly after demolition was complete (and the garage framing had been started; as you can probably tell, that part is new):

If you compare the two, you’ll notice that they added a window or two to the tower. Oh, and if you want to know what it looks like completely finished, well, here you go:

Towers are neat features, but from an interior design standpoint they can be a real nightmare. Just try to furnish a room that consists largely of round walls! Most furniture isn’t built that way, and the stuff that is most likely has the wrong curvature. Fortunately, most houses that have towers use them much as, I believe, castles largely did: they put staircases in them. In the case of the house above, for instance, look at how the windows are positioned on the tower (and look at the relative position of the front door to that tower). From an exterior examination it appears that this unusual architectural feature houses a spiral staircase that enables access to the house’s second floor.

A bit more recently, in 2017, another major remodel (more likely, a complete teardown; I didn’t seem to record in-progress photos of the earliest stages of this project) over on Brewster Avenue transformed a small two-story house into a larger one. From Brewster Avenue it looked like this during a later phase of construction:

Turn the corner, though (this house is located on the corner of Brewster and Hillview Avenues), and today you see this:

As you can see, the tower in this house is a much more significant architectural element. Given the placement of that front door, and the fact that the second story windows on the tower element are on a level with one another, this house may well have a round (well, partially round) room in the upper half of that tower element. This is another house I’d certainly love to see the inside of…

Just down Brewster Avenue, tower fever seemed to be catching. I noticed this place begin construction shortly after the one above: 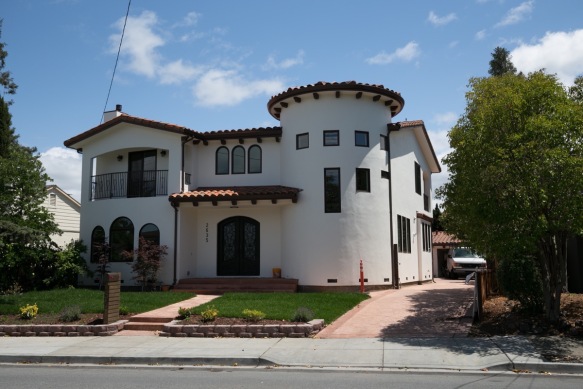 That front door seems suited for a castle, and I love the roof elements on the tower. Here the windows in that tower suggest that it houses a staircase, incidentally.

Recently I was out walking along Jeter Street and came across this house at 166 Jeter. Although it doesn’t have a round tower, it does have a partially octagonal room that very much suggests a tower:

Squaring off the sides of a round element in this way certainly make the room somewhat, although not entirely, easier to furnish. My parents certainly thought so: when they planned out their “retirement” home (my Dad, who is 90, is as busy as ever), the architect included two octagonal components. One houses the front entry and the main staircase, while the other serves as my Dad’s home office: it has bookshelves lining the walls and a desk in the middle of the room. Getting back to the house above, I would think that the view from the inside of that bump-out, with all of the window coverings open, must give the homeowner a slightly omniscient feeling: those windows provide a full 180 degree view, one that, upstairs, isn’t blocked by the neighboring houses. That would make a fantastic home office!

This house is fairly old, having been built in 1926, so it appears that people have been thinking about building castles for a long time here in Redwood City.

These three homes look somewhat castle-like, and certainly catch the eye. However, no enumeration of Redwood City’s “castle” homes would be complete without the magnificent one up in Emerald Hills, which sits at the corner of Highland Avenue and Laurel Way. From the intersection you only get a hint of what is to come, since the most interesting architectural feature of this house (a tower!) is largely hidden by a large tree:

Continue up Highland, however, and you see this:

Now that is a castle. Of course, if you really study the house you realize that for the most part it seems to be a typical two-story suburban home, just one with a really interesting appendage. That tower, along with the entryway and the stairs up from the driveway, are covered in stone (real or fake, I can’t tell from the street) to really emphasize this home’s signature element. And again, from looking at the windows in the tower it appears that there is a staircase within, as well as a round room at the top of the tower. Lest you get the idea that this house is really old, I should note that it was built in 1981…

Round towers on houses are by no means unique to Redwood City, of course. But places like these just go to illustrate the incredible variety of home styles that can be found here. Really, there is something for everyone, if you just look hard enough. Towers are unusual features these days, and thus they really catch the eye. They generally aren’t very practical, but if you really want the world to know that your home is your castle, you know what to do…

Redwood City’s Friday night downtown concerts (Music on the Square) have been going on in Courthouse Square for about two weeks now, but for those of us who prefer to enjoy our Music in the Park, that concert series will be starting on Wednesday, June 12, and will continue each Wednesday until the final concert is played on August 14. As usual the concerts will be played in Stafford Park (on Hopkins Avenue, between King and Lowell streets) and will run from 6 p.m. to 8 p.m.

1 thought on “A Man’s Home is his Castle”