At the end of last week’s blog post I ended the penultimate sentence with “…there are plenty of single-family homes being built or being drastically remodeled throughout the city.” Reader Adrian noted that although there are plenty of single-family homes being rebuilt throughout the city, the number of new single-family homes being added to our existing supply is close to zero. He’s right in that, largely because within the city limits there is very little open land upon which single-family homes can be economically built. On the open land that does exist, such as the parcel out on Maple Street east of Highway 101, developers are instead choosing to build multi-family developments consisting of townhomes. The higher density you get from a townhouse development makes more sense for some areas of the city, especially those close to transit (like the 33 units that are being built on El Camino Real at Hopkins Avenue).

Before I continue I should clarify that when I refer to “single-family homes” in this particular post, I’m really talking about “single-family detached” homes. That is, free-standing homes that are not connected to one another. Townhouses are of course single-family homes, but they are attached to one another. For purposes of this post I’m lumping those in with multi-family developments such as large condominium and apartment buildings. Not technically correct, I know, but I didn’t want to have to keep throwing in the word “detached” all throughout this post. Please forgive my imprecision here…

When I wrote that sentence at the end of last week’s post, I was primarily thinking about all of the housing projects throughout the city where an existing home is completely torn down and a new, larger one is built in its place. For instance, I’ve been keenly interested in this house being built at 1817 Hopkins Avenue:

Prior to the construction of this rather large house, the lot held a single-story, 1,440 square-foot home that featured three bedrooms and two bathrooms. The original home was built in 1925, and probably needed to be updated (although I seem to recall seeing various remodeling projects being done on that home over the years). But the above is no remodel: the home was completely torn down and the foundation was ripped up, after which the 8,255-square-foot parcel was re-graded and construction of the home you see pictured above got underway.

Another recent example, one that is a bit farther along in its construction, is this home at 16 Hillview Avenue, just two doors down from Whipple Avenue:

West Valley Ventures, the developer, is building a four bedroom, 3-1/2 bathroom, 3,100 square-foot home (with a single car attached garage on the right side; it isn’t visible in the above picture). The home is nearly complete and will be put up for sale very soon now (the listing, which doesn’t have a price as I write this, can be found here). Here, too, to build this house the contractor had to first tear down the 1,500 square-foot, three-bedroom, two-bathroom home that until recently could be found at this address. Certainly, it looked to have been a fairly ordinary little house: 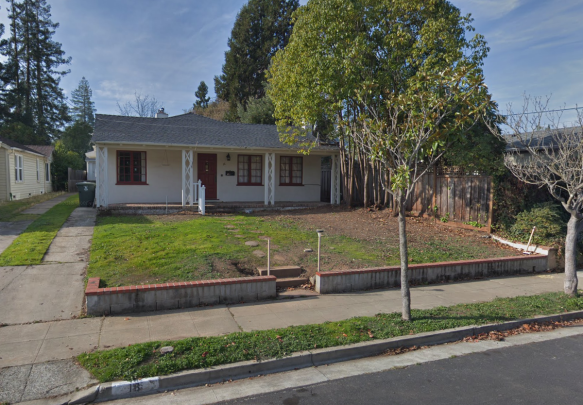 Projects like these are what I was thinking of when I wrapped up last week’s post on multi-family developments. However, Adrian’s response to that post got me thinking about places where additional single-family homes really were being built within the Redwood City limits. I didn’t come up with a lot of examples, but I did manage to think of a few. As I noted earlier, although there is very little open land upon which to build new single-family homes, there have been, and still are, a number of parcels with a single home on them that are large enough for subdividing.

For one, there was the very deep lot at 1410 Valota Road. This lot used to contain a single 1,150-square-foot home (two bedrooms, one bathroom!), a home that was pretty hard to see from the street:

That home was of course torn down, and the lot was subdivided into five parcels. Five large single-family homes were then built on those parcels, and put up for sale in 2014. Here is what that same parcel looks like today (for point of reference, notice the tall tree towards the right side of both pictures):

Because the property was so deep, a new road, Lauren Lane, was built to provide access to the four homes that are arrayed behind the one home in this development that fronts onto Valota Road. Because one home was torn down and five were built in its place, this particular project resulted in a net addition of four new single-family homes, all within the Redwood City limits.

The above project was completed in 2014. More recently, a developer did something similar with yet another large lot that again contained one single-family home, at the corner of Canyon Road and Bain Place. Prior to the new development that particular property was always hard for me to photograph, since the homeowner had lined the perimeter of the property with trees and bushes that over the years had grown into a very effective privacy fence. Technology almost always has a way, however, so thanks to Google Earth and its satellite-mounted cameras we can see just what that property used to look like when viewed from overhead:

In this case the original house (with the dark roof, just below the open field) appears to be a medium-sized one. There also appears to have been an outbuilding or two, and I note that the property had driveway access to both Canyon Road and Bain Place. But as anyone who owns a single-family home on the San Francisco Peninsula knows, the vast majority of their home’s value is not in the house, but in the land. And a parcel as large as this one had to be incredibly valuable. Thus, it was divided it into four parcels and four houses of varying sizes (from large to very large) were built on the land. Due to the shape of the property, three of the houses face onto Bain Place, while the fourth faces Canyon Road. This one is located at the corner, and at 4,000 square feet, is one of the largest:

From the outside, at least, it is a beautiful home. This four-bedroom, four-bathroom home sold in December 2017 for $3.2 million, according to Redfin. The other homes in the development are roughly comparable in size, and sold for comparable prices. I was glad to see that the developer styled each home very differently from the others, so that there is no feeling that these four homes were built as a set. For instance, here is the one that fronts onto Canyon Road: 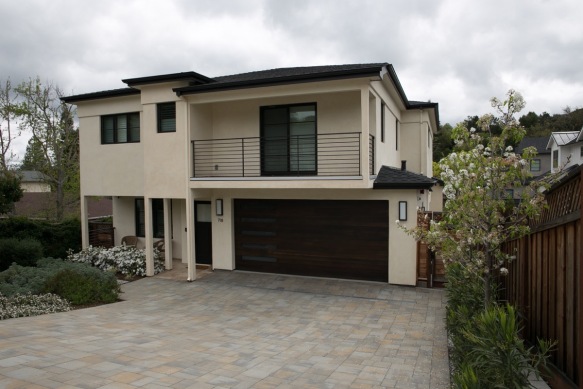 It may not look all that big, but don’t let appearances fool you. The house is actually quite deep. Like the other, this home is also 4,000 square feet, and has five bedrooms to go with its four bathrooms.

So again, this is an instance where a one single-family home was torn down to make way for four new ones, a net addition of three.

Next up, there is The Grove, a development on Finger Avenue that combined and then re-divided a handful of parcels that (I believe) originally contained three homes. The resulting development, complete with a horseshoe-shaped road (“Liberty Hall Lane”) that provides access to the new homes, consists of eight brand-new, single-family homes. Here is a picture of just a couple of them:

The developer seems to have done a pretty good job of retaining some of the mature trees that have clearly been growing in this area for years. Here, too, the homes vary in style (note the one with the round tower feature on the left), helping to reduce the feeling that they were all built as part of a single development. Although I’m pretty sure that Liberty Hall Lane is a private road, and that the homeowners all belong to a road association to keep that road maintained, so each of the eight the homeowners will always have that small reminder, at least, that their home was indeed part of a planned subdivision.

This home, which is located just a couple of parcels beyond the Bonfare Shopping Center up Oak Knoll Drive, is also hard to see thanks to the thick trees that hide it from the street. From what I can tell the house is in terrible shape and is a complete tear-down. But it sits on a remarkably large (for the area) .91-acre lot, and the current owner has plans to tear down the house, subdivide the lot, and build three new single-family homes on the parcel. The above picture is very recent (but the property hasn’t really changed in months; I don’t believe it is currently occupied). In mid-February the owner (who appears to be a contractor) went before the Historic Resources Advisory Committee to make sure that this house, which was built in 1920, is historically significant. Assuming that it isn’t, he will request permission to subdivide and then develop the property. Assuming it is, this will be yet another net addition to Redwood City’s stock of single-family homes — although it will of course be a very small net addition.

The above are just the developments I can think of off the top of my head, developments that came about since I began this blog (and that lie within the city limits; I know of at least three more that fall just outside those limits). I’m probably missing some, though, and I expect that there will be a couple of more of these over the next several years as homeowners with very large properties decide to sell and as developers get wind of those properties. But I will be the first to admit that although these have all resulted in a net addition of detached, single-family homes to Redwood City, that addition is a very small one. If I’ve done my math right, the above projects resulted in a total of 17 net new homes, which compared to the approximately 15,000 single-family detached homes that existed prior to them, is just a drop in the bucket.

At next week’s City Council meeting (Monday, April 8, at 7 p.m. in the Council Chambers) Redwood City’s Council will once again be looking at, and possibly choosing, the One True voting district map for the 2020 City Council election. If this subject interests you I highly recommend that you either attend the meeting in person or follow along online (either in real time or after the fact). The agenda for the meeting can be found here. (The item relating to this subject is labeled 8.A. Click on that item to see a list of links to the proposed new maps and related documents.) Alternatively, you can find links to the maps from the web page devoted to the District Elections Process. (See the section titled “NEW! District Elections Update- APRIL 1, 2019.”)

18 thoughts on “Single, Not Attached”