Some time ago — I was a bit surprised to realize that it was more than a year ago — I wrote a post called Southern Developments that described the various development projects then in active development in Menlo Park. Because my wife and I continue to drive for Meals on Wheels, and because the kitchen where the meals are prepared is in Menlo Park, I continue to make the weekly drive between Redwood City and Menlo Park. As I do, I keep an eye on the projects along El Camino Real (which is the route I take). Since I wrote that blog post, a couple of the projects I wrote about have made significant progress. As well, Menlo Park has approved a couple of new ones that are now getting started. Thus, this week I thought I’d once again dedicate a blog post to Menlo Park and the numerous development projects that are currently underway in that city.

First up, one project I didn’t mention in that earlier post, but that I have mentioned in others, is the condominium project being built on the former Encinal Avenue site of Roger Reynolds Nursery . After the nursery closed the buildings sat idle for quite some time, but by mid-2017 the site had been cleared and made ready for construction. Things seemed to stall again for quite some time: I visited the site several times and saw little evidence of activity. However, after not dropping by the site for quite some time — it isn’t exactly on the way to anywhere I normally go — I went by this week to see if the project ever got off the ground. And indeed it did: 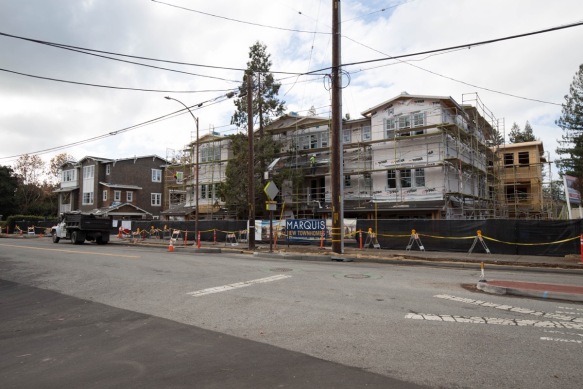 It appears that the project changed hands: originally it was to be built by Hunter Properties, which likely explains the delays in construction. In any case, the project we have today, as you can see if you look closely at the sign, is being built by Pulte Homes. The project itself is called “Marquis”; you can find photos and pricing on the Pulte website. In short, though, the project consists of 24 townhouse-style condominiums grouped into seven buildings. Twenty of the condos will have four bedrooms each, while the remaining four will be three-bedroom units. All will have garage space for two cars. Prices range from $1.95 million to $2.16 million, and as approved three of the units were to be affordable — and I presume that the original agreement for those affordable units is still in place. As you can see, the units are well on their way to completion. One building — the one to the immediate left of the condo complex’s driveway — appears to be complete; presumably that will be the “model” that prospective buyers will tour while the remaining buildings are being completed. That particular building contains four of the complex’s condominiums. 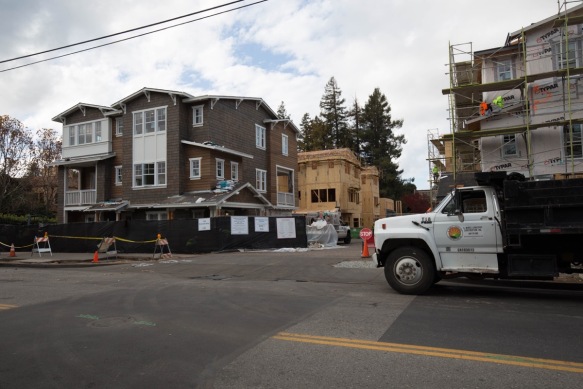 More than two years ago I wrote about how Treadmill Outlet had moved to Menlo Park. They used to be located on El Camino Real in Redwood City, but had to move in order to make way for the eight-story, 350-unit apartment building that is currently being constructed at 1409 El Camino Real. Treadmill Outlet had moved into the empty building previously occupied by Beltramo’s, the long-time wine and liquor store that had closed some time before. As I said, Treadmill Outlet had been operating out of their Menlo Park location for about two years, but no more: they’ve moved back to Redwood City! Today they are once again on El Camino Real, but this time they are located between Brewster Avenue and Hopkins Avenue, in the space that was most recently “99 Cents and Up.”

I’m happy that they are back in Redwood City, but this post is about Menlo Park. So what’s going on where Treadmill Outlet (and before them, Beltramo’s) was located? Construction, of course: 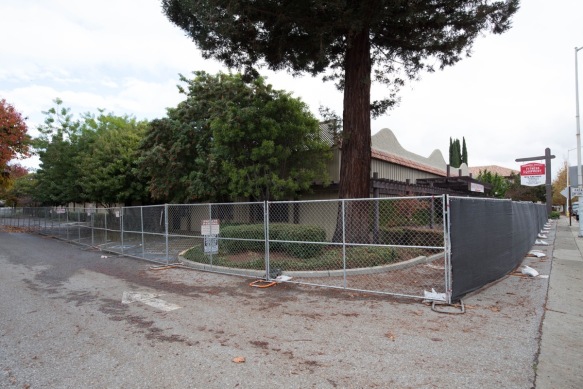 The old one-story retail building, which you can see in the above picture, will soon be torn down, to be replaced by two buildings: a two-story, “non-medical” office building along the front of the property, and a three-story residential building sporting 27 units along the back (which will face onto San Antonio Street, a street which parallels El Camino Real and runs along the back side of the property). Beneath both buildings will be a large underground parking garage accessible from a driveway off El Camino Real.

Across the street and down about three blocks we come to the mixed-use project being built at 1295 El Camino Real. Where two buildings housing Dancer Dejour, Susan’s Nails and private offices once stood, today a project to bring a single building consisting of 15 apartments “geared for corporate workers” above and behind 2,000 square feet of ground-floor retail is well on its way to completion: 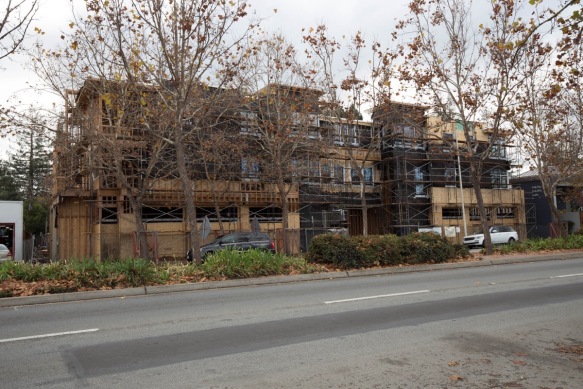 Two doors down from that, we come to the former site of the Park Theater, now slated to become a very-mixed-use building. 1275 El Camino Real will have commercial (retail or café) space on the ground floor along with parking for the building, non-medical office space on the second floor, and three residential units on the top floor. Here is what the site looks like today: 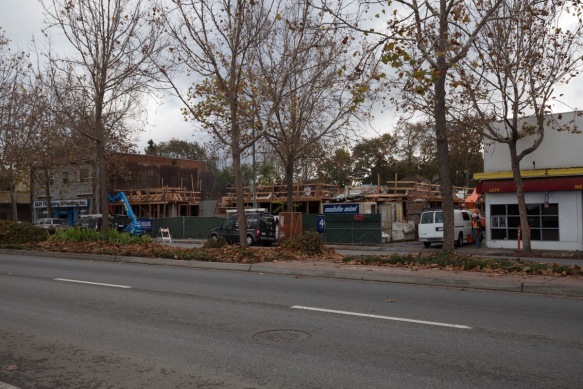 Clearly, this project has a ways to go.

Across the street from both of these two projects is the site of one of Menlo Park’s largest projects directly on El Camino Real: the Station 1300 project. Slated to bring 220,000 square feet of commercial space and 183 apartments (a mix of one, two, and three bedroom units), this project sits on a giant 6.4-acre site. The complex will consist of three separate buildings and a large multi-level underground parking garage that apparently spans almost the entire site. The commercial space will be mostly non-medical (you have to wonder why none of these projects allow medical) office space, but there will also be roughly 19,000-30,000 square feet of “community-serving” space: a mix of retail, restaurants, financial institutions, and service businesses.

This project has been underway for some time now, and currently if you peek over the construction fencing, as I did, you’ll see that the underground garage is nearing completion: 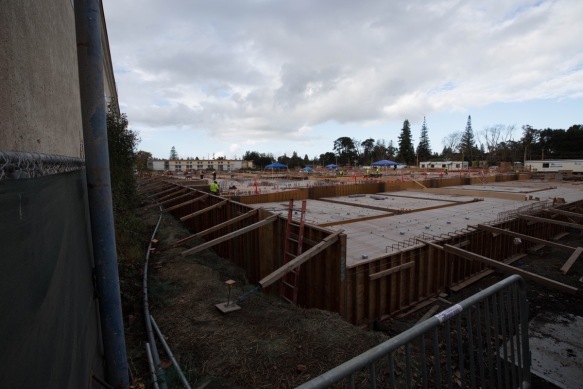 Given the size and complexity of this project, I don’t expect it to be complete next year; it’ll be at least 2020 or 2021 before we see this one open to the public. But Station 1300 is located very close to Menlo Park’s Caltrain station, making both its residential and its office spaces very attractive to commuters.

From Station 1300 I headed over towards the Menlo Park Caltrain Station. On the way, I passed the site of one of Menlo Park’s newest projects, one that I had not previously noticed. The site, which is directly across Santa Cruz Avenue from the building that houses Kepler’s Books and Café Borrone, used to have a couple of small retail/office buildings. Those buildings have been torn down, though: 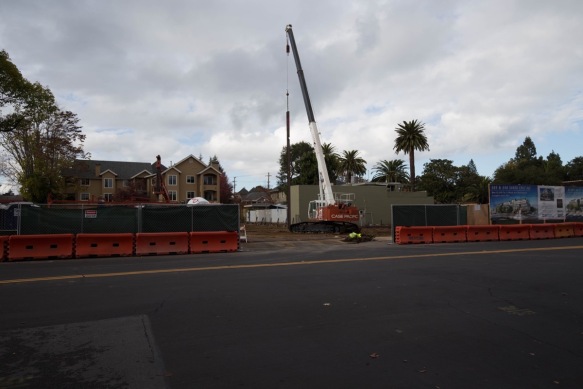 (I took the above picture while standing next to the entrance to the underground garage beneath the Kepler’s Books building; to my left, beyond the edge of the picture, is El Camino Real; to my right is the Caltrain station.)

After spending some time watching the activity on the Santa Cruz Avenue project, I crossed the Caltrain tracks and headed down Alma Street to near where it intersects with Ravenswood Avenue. This is where the building that will house the Schmidt Family Foundation is rapidly nearing completion: 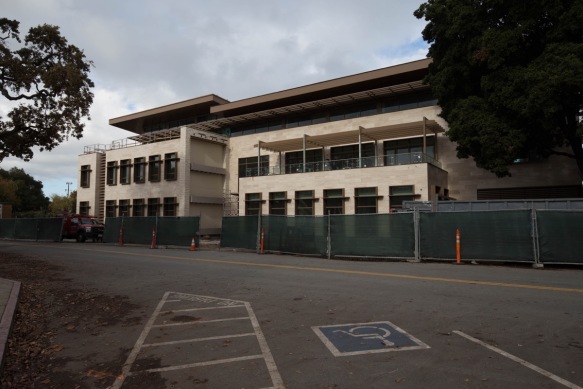 It’s a very nice looking building, and a very “green” one as well. I’m still curious to see the “public plazas” that this building will include; from looking at the plans they are really just small patios that sit between the building and Alma Street (one of them serves as the entrance to the building). There is supposed to be a “coffee kiosk” on one; I’ll be interested to see how that goes. Certainly, once the construction fences come down I’ll head down there and see how comfortable it is for a member of the public to enjoy those plazas.

Lastly, here is a recent picture of the site of Stanford’s Middle Plaza at 500 El Camino Real project (this project sits where Middle Avenue dead-ends into El Camino Real, adjacent to the Stanford park Hotel): 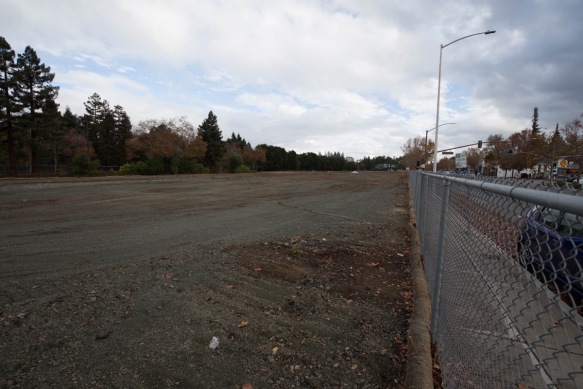 As you can see, Stanford’s contractors have done a nice job wiping away all signs of the automobile dealerships that once occupied this long, narrow site squeezed between the Caltrain tracks and El Camino Real. Well, not all signs; it seems they left one: 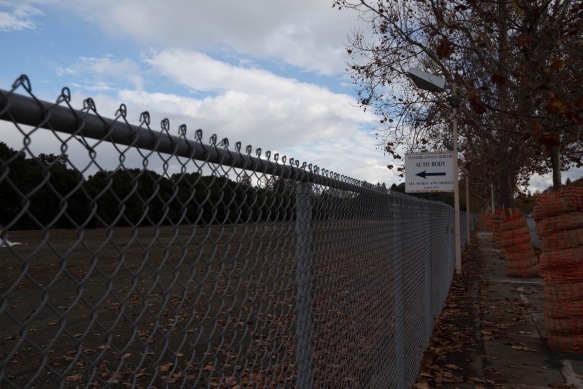 (Click for a larger view, but the sign points to where Stanford Lincoln Mercury’s auto body shop once stood.)

With demolition complete, construction is scheduled for early in the new year (2019) with an estimated completion date of late 2020. As a reminder, Stanford will be building three non-medical office buildings, 215 for-rent apartments and a large public plaza with a 10,000 square foot cafe/retail facility on the 8.4-acre site.

Development-wise, Menlo Park has a lot going on right now, and this isn’t by any means the end. There are a couple of more projects in the pipeline: projects that I’ll report on if and when they actually get underway. For now, though, I hope that this helps you understand just what is going on behind all those construction fences both along and near El Camino Real in Menlo Park.