With Halloween fast approaching, I’ve been on the lookout for houses that really celebrate the holiday. Because Halloween is still almost a week away, I know that many have yet to put up their decorations. Operating on the theory that most of the people who are seriously into the holiday put up their decorations well in advance of the big night, though, I spent some time this week covering as much ground as I could, looking for homes decorated for Halloween.

Halloween displays are best viewed at night, while I of course do most of my exploring during the day, so when I see a house that has been decorated I sometimes have to use my imagination. Especially when some or all of the decorations follow recent trends and consist of inflatable black cats, spiders, ghosts, and the like: many of those seem to be on timers, and only inflate during the evening hours. And more and more houses are using strings of holiday lights colored for the season: Christmas lights, basically, but ones that contain predominantly orange bulbs. Those are hard to see in the daytime, since they are not illuminated. But I did see plenty of homes that, even in the daytime, proudly display their Halloween spirit.

For some, like the amazing display in front of the house at the corner of Whipple Avenue and Turnsworth Avenue, imagination just wont do: such places can be only appreciated in full darkness. Knowing what that particular place was going to be like based on a visit last year, I made a special nighttime visit over the weekend: 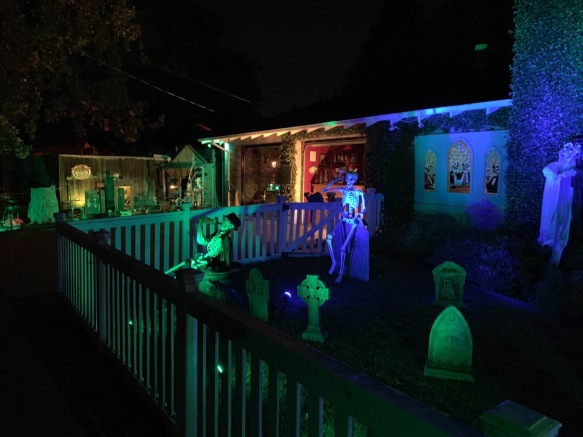 I mentioned this house in a blog post last year, and it’s definitely worth a re-mention. It really has to be seen to be believed. If you have kids, I recommend you to take them by any night between now and Halloween; they’ll love it — as will most adults, I suspect. There is so much to see and do there. Follow the instructions on the signs, and look for the tethered laser pointers in front of the display to the left of the driveway; you’ll need them to highlight the targets that trigger those animations. As for the part of the yard towards Whipple Avenue, do be sure and listen to the skeletons playing poker; they’re pretty funny:

Not everyone needs to put up a rich interactive Halloween environment such as the above, though. I found a number of houses that focused more on quality over quantity. For instance, this somewhat simple display on Hopkins Avenue catches my eye every time I go by:

That ghostly bride figure is extremely well done. It appears that her internal framework is made of chicken wire, with some sort of gauze draped over it. Relatively simple, but highly effective.

As for inflatables, I noticed this house up on Farm Hill when I was on my way up to Cañada College to research a recent column I wrote for The San Mateo Daily Journal: 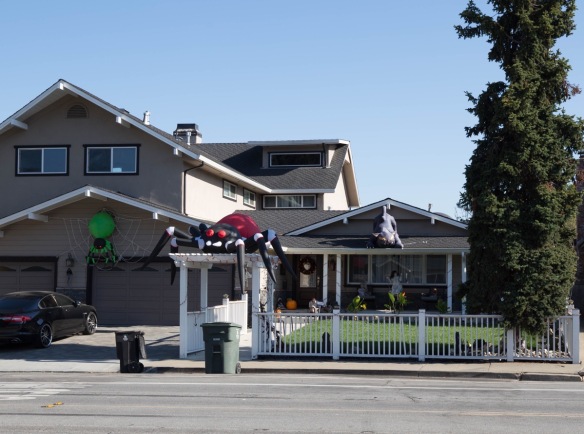 They seem to be keeping their decorations inflated all day long. The black-and-red spider particularly caught my eye, but when I stopped to take a picture I noticed the cat on the roof, who moves his head back and forth. The green spider over the garage appears to have light-up eyes; I’m guessing that they may be motion activated. And finally, I really like the skeleton on the porch swing.

In a simpler vein, I couldn’t help but notice this guy, who I believe was on Edgewood Road:

Some people go for a bit of whimsy. In addition to a rather nice graveyard, these folks (who I think were located on the corner of Avenue Del Ora and James Avenue) have two skeletons on lawn chairs enjoying drinks while taking in the sun, along with their little skeleton dog, who is standing by the cocktail table:

If you read last year’s column where I mentioned a Halloween house or two, you may recall that I was particularly enamored with one house over on Massachusetts Avenue, across from Henry Ford School. Rather than going for bats, skeletons, or witches, they went all in on one thing: pumpkins. Lots and lots of pumpkins. They’ve done it again this year, I’m happy to say: 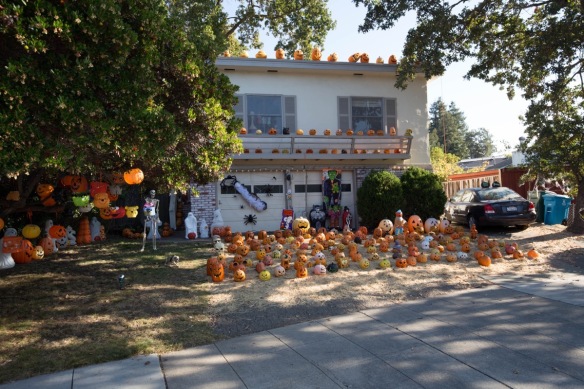 They do have a couple of other decorations up against the garage, but clearly these folks have a thing for pumpkins. Although they did add one large new element this year, I believe (at least, I don’t recall seeing it last year): they’ve added a small cemetery between their pumpkin display and the fenced-in Redwood Creek, which runs alongside their property:

The whole display is so over the top that for some reason I find it charming. I for one hope that they keep it up!

Of course, no roundup of holiday displays would be complete without checking in on Dug the T-Rex. Dug is a large metal T-Rex who “lives” in the front yard of a house on Jefferson Avenue, just a little way up from Alameda de Las Pulgas. Dug’s owners seem to delight in dressing Dug up in various costumes throughout the year, and Halloween is no exception. This year he is dressed up as what I can only assume is Gene Simmons from the band Kiss:

I grew up building haunted houses with my best friend in his family’s garage, and my favorite Disneyland attraction is the Haunted Mansion, so naturally I’ve always loved Halloween. For some reason, though, I never really got into decorating my own house — as much as my kids wanted me to! I did enjoy taking them around the neighborhood on Halloween night when my kids were younger, though. It gave me a chance to see and admire the various Halloween setups that various neighbors had, and I enjoyed running into friends and neighbors out taking their own kids around.

Halloween is a somewhat polarizing holiday: it seems that people either really love it, or they don’t care for it at all. Fortunately, those that don’t care for it need not participate, whereas the rest of us can enjoy the fun that comes around but once a year. With my kids long out of the house, Halloween doesn’t have quite the same impact that it once did, but I’m still happy to pass out candy to those kids who still find it magical.