Some time ago one of my readers suggested that I write about “dog-friendly Redwood City.” Other topics kept arising that seemed to be more important, but the suggestion remained. But it has finally worked its way to the top of my queue, so here we are.

Back when my wife and I had a dog I was more well-versed on the subject, but our dog—a rescue greyhound named “Velocity”—passed away a couple of years ago and we have not yet gotten to a place where we feel we can replace him. There was a time when we walked around town and visited dog parks with Velocity, and thus could speak with some authority as to the experience, but a lot has changed over the last couple of years. Thus, I’m hoping that those of you with dogs will add comments to this post, letting us all know the best places in Redwood City to go with dogs.

Although I don’t currently have a dog, I certainly can report on Redwood City’s various dog parks. Walking to and through those parks is of course right up my alley, so this week I visited the Main Street Dog Agility Park, Stulsaft Park, and Shore Dogs Park. But first, let me put in a plug for a park that, although not within Redwood City’s borders, is very near by, and is a great place for dogs: the Pulgas Ridge Open Space Preserve.

Pulgas Ridge Open Space Preserve is a 366-acre park very near the intersection of Edgewood Road and Crestview Drive. Head up Crestview from that intersection and make the very first left you come to, onto Edmonds Road. Follow the road to the well-marked parking lot.

Pulgas Ridge has six miles of trails, all of which are open to dogs who are on a leash. As well, near the center of the park there is a 17.5-acre off-leash area where your dogs can roam free. Note that the off-leash area is not fenced; although there are signs and some minimal fencing at the entrances to the off-leash area, the bulk of the area is not surrounded by fences. Thus, you’ll only want to take the leash off your dog here if they are well-controlled. And note that there is plenty of wildlife in this park! If your dog is apt to chase squirrels or deer or such, you might want to keep them on leash. Finally, although the off-leash area is somewhat clear (unlike most of the rest of the park, which is thick with trees and bushes), don’t expect a wide-open, well-groomed lawn. Here is what it looks like, so you know what to expect:

The views from Pulgas Ridge are great, though, and the trails are in good shape and pretty well-marked. Walk them, and you’ll get in good shape too: the bulk of the park is located on the sides of a fairly steep canyon, so expect to be doing a lot of climbing (and then descending) on your hikes.

If you are looking for something a little safer for your four-legged friend, pay a visit to Shore Dogs Park in Redwood Shores. We used to take Velocity there, and he loved it. Your dog will find plenty of canine companions pretty much any time you visit, and the park is thoughtfully divided into two parts, one for larger dogs (35 pounds and over) and one for smaller dogs. This dog park is nicely fenced, so we had no hesitation letting our greyhound off leash here. Back when we used to visit there was little in the way of amenities, but since then the Shore Dogs Association—who apparently manages the park for the city—has added a shaded picnic bench (for us humans, of course) and some equipment for agility training:

Other than that, the large dog area is just a fenced, wide-open space with no trees or grass; it looks much like you see above. The smaller dog area, on the other hand, has a decent-sized grass section that is nicely shaded by one large tree:

You’ll find Shore Dogs Park on Radio Road, which is out near the east end of Redwood Shores Parkway. There is a fair amount of parking both along the road next to the park and in the small parking lot just beyond it.

If the idea of agility training your dog interests you, by all means take your dog to the Main Street Dog Agility Park. This small park is, as you might guess, on Main Street, just a couple of blocks north of Chestnut Street (it lies between Beech and Elm, very near the ever-popular Main & Elm Restaurant). Due to the park’s relatively small size, it was designed for “agility practice and socialization of dogs (and their humans)”. The dog agility course, which is entirely fenced, is fairly extensive. Adjacent to the agility area is a small dead-end section of Beech Street that has been closed to traffic. That closed-off section of road (which has bollards to keep cars out, but is not fenced) has a painted course that dogs are presumably trained to follow:

At different points along the circuitous route, there are colored symbols indicating where the dog should take a particular action (“Sit,” “Stay,” etc.).

The park itself has one or two shaded places to sit (along with a number of places that aren’t shaded), water fountains for both humans and animals, and, of course, the ramps, tunnels, stepping-stones, fences, etc., that make up the agility course.

You don’t have to be training your dog to bring them to this park, of course, although the equipment looks like it’d be fun. Some dogs seem to come just for the socialization aspects. The fact that this is an off-leash dog park makes it particularly valuable, especially for people who live in some of Redwood City’s nearby apartments and condos.

My wife and I are fortunate to live in a single-family home with a backyard, so our dog had a safe, fenced area in which to be whenever he wanted (or needed) to go outside. Back when we had him the Main Street Dog agility park had yet to be constructed, so we have yet to try this park out for ourselves. For socialization purposes we did take him to Shore Dogs Park, though, and he always had a great time there. Visits to that park were the only times we actually saw our (former) racing greyhound get into high gear and really run—although the relatively small size of the park, compared to a racetrack, meant that he only did so for a moment. Still, the joy he expressed when running free with other dogs made the effort to haul him out there well worth it.

If you’ve only seen the Farm Hill Boulevard side of Stulsaft Park—with its playgrounds, water feature, picnic tables, restrooms, and other such amenities—you may not be aware that it has a large off-leash section as well. Stulsaft Park, which at 42 acres is the largest public park in Redwood City, has something of a split personality. The north side, along Farm Hill, appears to be your typical neighborhood park. Head south (and downhill!) along its hiking trails, though, and suddenly you’ll find yourself walking among trees and bushes, and crossing a delightful little creek (Arroyo Ojo de Agua). On the south side of that creek the trails become dog-friendly: here they are open to off-leash dogs.

Before you go, be sure you are well aware of the rules. In particular, make sure you know just where your dog is allowed off-leash, and where they are not. And note that when the day camps are in session some of the trails—those closest to the creek—are closed to off-leash dogs (your dogs can still use those trails; you just need to keep them on a leash there). You can find the rules online, and you’ll find them printed on signs within the park as well. And if your dog can read, as this little guy appears able to, make sure they know the rules: 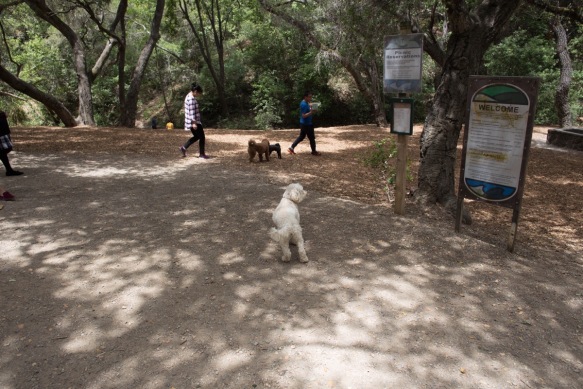 Seriously, though, this is a great place to walk with your dog, as evidenced by the many people and dogs my wife and I encountered while walking the trails. A strict reading of the rule “south of the creek” implies that off-leash dogs are not allowed in the creek itself, but we saw a couple of them playing in a secluded part of the creek, and they certainly were having fun. In any case, if you are bringing your dog, the main entrance to that part of the park is from Recreation Way. Park your car near the intersection of Maddux Drive and Mitchell Way, and walk in from there (Recreation Way is a short extension of Mitchell Way).

While exploring the park this week I learned that there are at least two other entrances to the park, although the main ones (Farm Hill and Recreation Way) probably make the most sense for all but locals. I’ll just note that there is an entrance from Parkdale Way, off Foothill Street, and another from Silver Hill Road.

There are picnic benches near both main entrances, including some that can be reserved. I believe that the park’s only restrooms are at the Farm Hill end of the park, in the children’s play area. And although the trails are very wide (wide enough for a service vehicle, in fact) and the adjoining bushes seem to be well-trimmed, note that there is some poison oak in Stulsaft Park, so keep an eye out—and keep your dog out of it!

Redwood City’s three dog-friendly parks, plus Pulgas Ridge, give Redwood City residents some good options for enjoying the great outdoors with their canine friends. I know that a number of businesses throughout the city are also great places to enjoy with one’s dog, although I again have to confess that I’m not the best person to ask for such a recommendation. We used to take Velocity up to Canyon Coffee; is that place still dog friendly? Here is where those of you with dogs can chime in: add a comment and let us know where you and your dog are welcome. I’ll certainly be interested in what you have to say; one of these days my wife and I do hope get another dog. Certainly, our home is much emptier without one.