I was planning to do an update on San Carlos—and I will, in just a moment—when I received notice that Steve Penna, publisher of The Spectrum Magazine, had suddenly passed away. Because Steve has been including some of my blog posts in his magazine over the past three years, I cannot let his passing go without some acknowledgement. This won’t be an obituary; I’ve left that to others who knew him far better than I (see The Daily Journal for one).

I didn’t know who Steve was when I began this blog in the summer of 2013. I first learned of him when he sent me an email: he had concluded that what I was doing with my blog aligned well with his goals for The Spectrum, and asked how I would feel about him publishing one of my articles from time-to-time in his magazine. After meeting with him in person we agreed to give it a try, and thus began a professional relationship that lasted for almost exactly three years.

Steve first published one of my articles in mid-2015, and every issue of The Spectrum Magazine since has included one of them. Because I write a new post every week, whereas The Spectrum is a monthly magazine, each month Steve was able to choose one from among my several recent articles. Thus I suddenly found myself in print, exposed to a whole new audience. Although the print versions of my articles were lightly edited—primarily to ensure that they fit within a two-page spread—he never requested that I make any changes to what I was doing. I kept expecting him to steer me towards certain topics, but he never did; he was a hands-off editor, something for which I was very grateful.

Our arrangement was an informal one, which suited both of us just fine. That seemed to be Steve’s style: I first learned that he had submitted some of my articles for consideration by the San Francisco Press Club when he sent me an email informing me that I had won something and inviting me to the awards banquet. Thus, I not only have Steve Penna to thank for seeing my blog in print, but I also have him to thank for my two Press Club awards (I won First Place in the “Magazines/Trade Publications, Series or Continuing Coverage” category in both 2016 and 2017).

I occasionally ran into Steve while I was walking downtown; he was a part-owner of “Stuff on the Square,” a tiny shop in one of the pavilions that flank Courthouse Square, and he regularly held court in front of his shop. There I was privileged to watch him gather information (well, gossip, really) from, and pass information to, some of the many long-time Redwood City residents who dropped in to say hello to him. He was full of stories about current and past Redwood City activities and people, and I learned a lot from watching him operate. I will miss the cheery greeting he always gave me whenever I walked by, and I suspect that for some time to come I’ll instinctively look for him sitting there in Courthouse Square.

Thanks, Steve. It was a pleasure working with you, and a pleasure getting to know you. Regardless of the fate of The Spectrum, my blog will continue—and thanks to you it will be a little bit better than it was.

I’m actually traveling this week: as I write this, I’m sitting in a hotel room in Franklin, Tennessee, which is just outside of Nashville. In anticipation of my trip I spent some time wandering around San Carlos, taking pictures and checking on the progress of that city’s many development projects. Unusually for me, I didn’t start from my house: one of the projects I wanted to check on is near Carlmont High School, and the trip from my house to there and back simply would have taken more time than I had available. Thus, I had my wife drop me off near Carlmont, and I walked from there through San Carlos and back to my home in Redwood City.

The project I was aiming for is the Gateway San Carlos housing development. At the corner of San Carlos Avenue and Club Drive, on a site that until recently housed a church, Clarum Communities is building eleven single-family homes. A banner on the construction fencing announces that these are “Modern 3 & 4 Bedroom Single Family Homes From Low $2,000,000s”. Based on their exterior appearance, they are indeed modern:

The houses are being built in phases, and apparently the first phase (the handful of homes pictured above, I presume) has already sold out.

It seemed to take a while for this project to get to the point where the ground-floor concrete was poured, but as you can see that has been done and the framing for the first set of housing units is now well underway.

This project sits close to the massive Wheeler Plaza development that will occupy most of the block bounded by San Carlos Avenue, Laurel Street, Cherry Street, and Walnut Street. That project is at a similar point, with the underground garage and the first floor—which is also a set of poured-concrete commercial spaces—pretty much complete, with wooden framing for the upper residential floors well underway. I walked all the way around the Wheeler Plaza project and was awed by the amount of scaffolding that this project is using:

Next, I turned north to see how the Trestle Apartments are doing. Anyone who drives along El Camino cannot help but notice the six three-story residential buildings and two commercial buildings (one on each side of San Carlos’s historic railroad depot) that will ultimately make up this development. Although the foundations for the two commercial buildings are now well underway, the bulk of the work so far has been concentrated on the residential buildings. One or two of the four buildings just north of Holly Street are complete and are leasing; the others are just about done. Now the main focus is on the two apartment buildings just south of Holly, between Holly and the historic depot:

North of Holly, the narrow strip of land between El Camino Real and the Caltrain tracks upon which part of the Trestle development is being built had largely been empty. South of Holly, though, the land had previously been used for parking. In order to make this project possible, that parking had to be shifted to the South, to an otherwise empty strip of land just beyond where the Trestle development is rapidly springing up. That parking lot was largely completed a month or so ago and is now in active use. But one final piece that will provide easy access to this new parking lot is just about ready: the intersection of Cherry Street and El Camino Real, where the entry to the new parking lot is now located, is gaining a traffic signal. When I went by the hardware was in place, although it had yet to be activated: 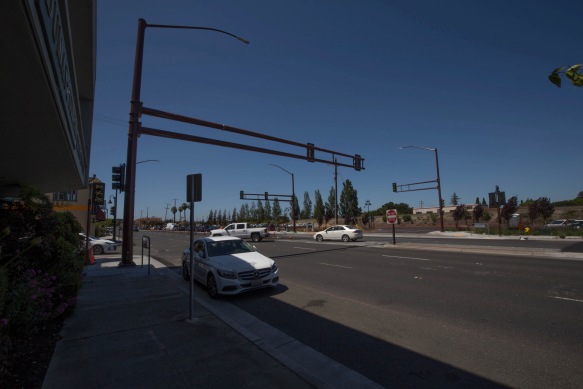 I’ll be curious to see how this new signaled intersection will affect the traffic on El Camino Real.

From El Camino I headed up Cherry Street to Walnut and then turned south, to take a look at the mixed-use project that was recently completed at 777 Walnut. The three-story Walnut Place development boasts twenty condominiums and a small commercial space on the ground floor; it looms over the mid-block parking lot behind the Bank of America. In case you haven’t been back there in a while, here is what it looks like now that it has been finished:

Next, I headed over to check on the progress of the project taking place at 1336 Arroyo Avenue. This large site used to be entirely occupied by a church complex, but that church apparently decided to squeeze its buildings onto just a portion of their property and sell off the bit at the corner of Arroyo Avenue and Elm Street. That corner parcel was large enough that a developer was able to construct three single-family homes on it, leaving the church with enough remaining space to construct an all-new sanctuary (the original had to be torn down in order to make way for the three homes) and a separate building that will contain both the church office and a rectory. All of the construction appears to be nearing completion. The following picture shows the original “community assembly building” (on the left) plus the new sanctuary building (in the center) and the combination office/rectory building on the right: 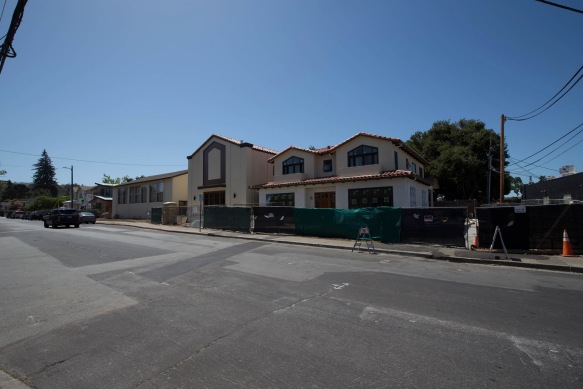 To the left of these three is the parcel where the homes are being built; as you can see, those, too, are nearly complete:

Throughout my journey I observed a number of small projects in various phases of completion. There are quite a few houses under construction, almost all of which appear to be remodels. For instance, I had a very nice chat with the owner of this house on Brittan Avenue (just up from Laurel), which I had assumed was a complete teardown and rebuild: 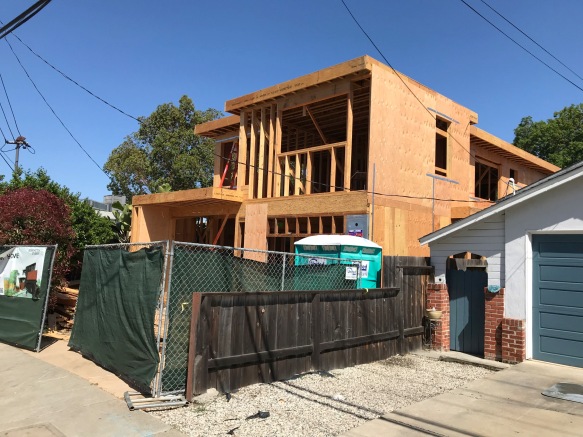 He set me straight, though. He is doubling the size of the 1200-square-foot house that used to be on this property. After living in it for a few years he realized that remodeling made much more economic sense than buying a new house elsewhere.

Toward the end of my wanderings, as I approached the Redwood City border, I cut up to Alameda de Las Pulgas. That new traffic signal at Cherry Street and El Camino isn’t the only one that San Carlos is adding: although there is no visible evidence as yet, the city has taken bids for a new traffic signal to be added to the intersection of Alameda de Las Pulgas and Eaton Avenue, which will of course replace the four-way stop controlling that intersection today: 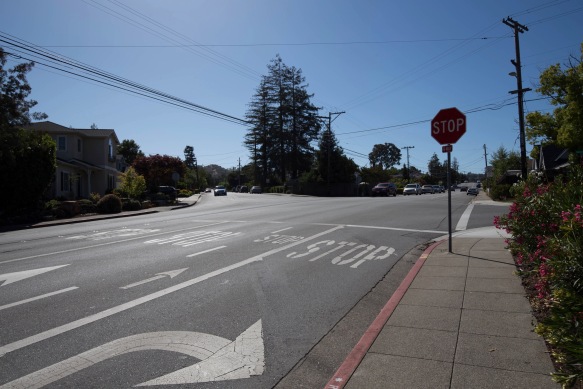 Given the heavy commute-hour traffic that rolls through this intersection each weekday, I’m hoping that this new signal will help improve the traffic flow. Certainly for those folks who use Eaton to get to and from their homes, this will likely be a welcome addition.

San Carlos is certainly growing up! The sheer amount of new housing and new offices that San Carlos is adding will presumably cause a shift in the city’s demographics, lowering the average resident’s age and greatly increasing the number of high-tech and biotech jobs. It is already changing the feel of the city, making it less of a village and more of a proper city. There are a lot of advantages to that, although I can sympathize with those who like San Carlos as it was, and don’t want so much change. For those of us who live in Redwood City, it’s a familiar tune…

2 thoughts on “This Time, it’s Personal”