Although my title is only somewhat related to today’s blog post, I love whimsical wordplay and the title of this week’s post is a famous palindrome: something that reads the same backwards as it does forwards (ignoring the spacing and punctuation). And as you’ll see, it does have some relevance to this week’s topic…

Back in February I wrote a post called Some Assembly Required in which I suggested that the city consider turning the Main Street parking lot (which sits in the middle of the block surrounded by Main Street, Middlefield Road, Jefferson Avenue, and Broadway) into a downtown park. That parking lot has been an important part of the downtown Redwood City parking picture, but that picture could be changed in a way that would eliminate the need for this valuable piece of downtown real estate being a place to park cars.

Back when the 168-space Middlefield Road parking lot was eliminated to make way for the Box buildings, parking in Redwood City’s downtown area took a hit. To help alleviate the problem the city made the county garage (on Middlefield Road, near Veterans Boulevard) available to the public at night and on weekends. Given that the 800-space county garage has more than four times the capacity of the lot we had lost, it theoretically made up for the loss, and then some. It didn’t help the lunch crowds, but it at least added more than enough capacity during the city’s busiest times: on Friday nights and on the weekends. However, even though the city placed a number of signs throughout downtown directing people to the county garage, whether it was due to a reluctance on people’s part to walk the four blocks to the center of downtown, or whether people just didn’t notice those signs, I still heard plenty of grumbling about our downtown parking situation.

Once the Box buildings were completed that project’s internal parking garage was also opened to the public on nights and weekends. Suddenly we had a real wealth of parking available for those who learned to take advantage—again, during the critical Friday night and weekend periods. And this new parking is very convenient: it is right at the end of Theatre Way, an easy one-block walk both from Redwood City’s twenty-screen theater building and from its Courthouse Square. Given that the Box garage follows the same model as those under the theaters—the first 90 minutes are free, and with theater validation you get four hours free—rarely do you even have to pay for parking in this garage of more than 900 spaces. And for those who are willing to walk, the County Garage’s nearly 800 spaces—which are completely free—are also still available.

The Box and the County garages are great, providing more than ample parking—but neither are available to the public during the day on weekdays. Thus, if you drive downtown to work, to shop, or to have lunch during the week, your parking options are either street parking, the Jefferson garage, the Marshall Street garage, or the Main Street parking lot. 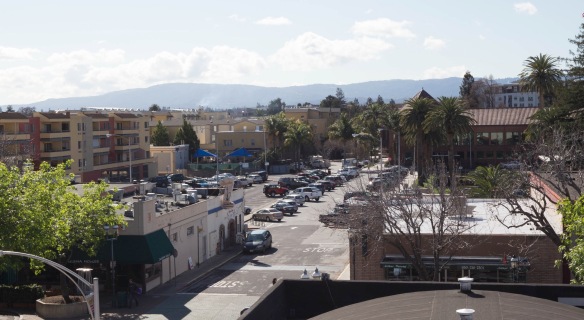 The Main Street lot has some 150 parking spaces, and if you drive through there during the lunch hour you’ll note that it is generally full. Thus, getting rid of this lot without creating equivalent parking elsewhere would likely upset a lot of regulars. Fortunately, though, a number of our downtown building projects are paying into a city parking fund that is intended for this very purpose. And although I don’t believe that the city has settled on a specific site yet, I do know that they’ve been giving thought toward building a municipal parking garage either in place of the surface lot between Jefferson and the downtown Public Library, or in place of the park on the other side of the library—at which point they may then turn the lot between Jefferson and the library into a park. This latter solution would have two benefits over the former:

In any case, the city could easily commission a parking garage for one side of the library or the other that would hold more than the 150 cars that the Main Street lot holds plus the roughly 100 spaces we’d lose from the library lot. And because this new garage would only be about a block from today’s Main Street lot, there shouldn’t be too many the objections to the relocated parking.

With the Main Street lot gone, the large space in the center of the block could then be reworked as a nice central city park. And as a good friend noted, the city could daylight Redwood Creek (this is my “canal” from my blog post title), which currently runs beneath the parking lot. This would not only give the park a great central feature, it would also serve as a reminder of the importance of the creek in Redwood City’s history. I only wish the creek could be re-exposed from this lot all the way to Bradford Street, where it can be seen today: this would allow people at times to take a boat from the center of downtown all the way to the Inner Harbor area on the east side of Highway 101. However, that underground portion of the creek runs through the Main Street lot, across Broadway, under the Marshall Street parking garage, and under the main Fire Station; daylighting it through all that would simply be too much of an upheaval. On the bright side, though, the portion of the creek that currently is accessible near Bradford Street—which is adjacent to where a large low-income development aimed at seniors is soon to get underway—is due to be spruced up and featured in a new small park that will run from Bradford to Veterans alongside the creek.

The Bradford Street project should be adding a small park along the creek, and with a lot of luck perhaps we could get a park to replace the Main Street lot. But there is a third place where I would like to propose we add a new park. This one, too, would take the place of an existing parking lot.

When I say “existing parking lot,” though, you’d be forgiven for not knowing that the site actually is a parking lot: I’m talking about the triangular parcel that sits adjacent to the now-shuttered “Pizza and Pints.” This Winslow Street lot was closed along with the Middlefield Road lot when construction on the Box buildings got underway: it was used as a staging area for construction equipment and materials. When the Box buildings were completed the lot was returned to service, but only briefly: it was once again shuttered when the 815 Hamilton project (that tall building that is being erected right behind the Fox Theatre) got underway, again so that it could be used as a staging area for equipment and materials. So essentially the Winslow Street lot—which has at most 46 parking spaces—has been closed since October of 2013, when the Box buildings broke ground.

My wife and I were sitting outside at Cru the other day, enjoying a glass of wine before meeting up with some friends. Cru, if you don’t know, is a great little wine bar in the Box buildings, around the side by the Caltrain tracks. They have a really nice outdoor patio that allows you to enjoy your wine and any accompanying nibbles in a comfortable, albeit momentarily noisy (when the trains go by), environment. Given that it is directly across the street from the Winslow Street lot and the 851 Hamilton project, I could not help but stare at the two as I was sipping my wine. 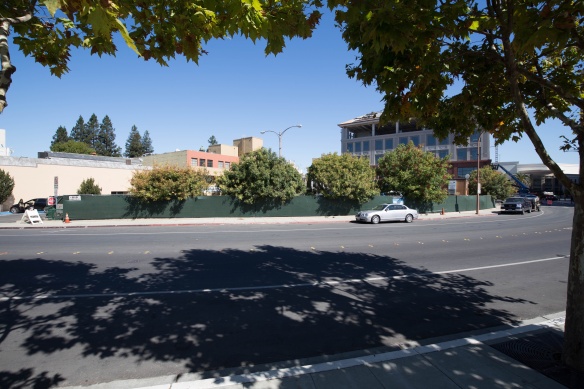 As I sat a number of thoughts ran through my mind. I thought about how long it had been since I had been able to use the Winslow Street parking lot. I thought about how many people have moved to Redwood City since that lot was first taken out of commission, and thus may not be aware that it is even there. I thought about how the city had once envisioned a grand entrance to the city in this area, and how the Box building’s design collapsed that vision into the small cement plaza upon which I was now sitting. And I thought about how we could use more parks downtown, if only to soften the hard surfaces of our new buildings.

As all of those thoughts swirled in my brain, it suddenly hit me: why not turn the Winslow Street lot into a combination park and city gateway? I envision a park that would be designed to lure people getting off of a train, and that would take them along an enticing path through the center of the park to Hamilton Street—from which it is only a short walk to Courthouse Square. Another pathway could lazily follow Winslow to the Middlefield Road face of the 815 Hamilton building; from there it is another short walk to the end of Theater Way. Well-designed signage could direct walkers to Redwood City’s most popular attractions. And to mark the park’s main entrance? It would have to be a third “Climate Best” arch, wouldn’t it?

So my “plan” would give us three new downtown parks and one relocated one, all with different purposes. My Winslow Street park would be less of a place to linger (although there would presumably be a bench or two) and more of a green welcome to Redwood City. The relocated park alongside the library could be the kind of park where families and kids would play—with play equipment and picnic benches and the like. The Main Street park would be something for everyone: a place to stroll and observe the creek, a place to sit and take in the sun, a place to run and play, and perhaps even a place to enjoy a small concert: the property is large enough that it could accommodate a small performing space. Finally, the Bradford Street park (which is likely happening, with or without my plan) would also be a place to stroll or sit alongside Redwood Creek.

What do you think? Do you like my plan? It certainly isn’t Panama, but I’ve thought about this forward and backward and it sure makes sense to me. The city has been considering locations for a downtown park, but has yet to announce anything. I say, hey, why stop at one?