This week I took a long walk that, among other things, took me downtown along Broadway. While passing Broadway Masala I noticed that their neighboring building, which houses Aili Ice Designs, has a new mural on its upper face:

The mural, which features flowers, honeycomb, and bees, really jazzes up the place, don’t you think?

If you look below the mural you’ll notice that this building actually houses two businesses: Aili Ice Designs, on the right, and the soon-to-open Teaspoon, a place that serves Bubble Tea and fruit-based “snow ice.” Teaspoon is part of a chain—they have five other locations in the Bay Area—so they presumably know what they are doing, but I can’t help but wonder if we have enough trendy tea places. Teaquation (on El Camino Real across from Sequoia Station) has been in Redwood City for almost a year and a half now, Comebuy (on Broadway, across from Powerhouse Gym) has been around for about two years, and Quickly (in Kohl’s Plaza) has been around even longer than that. And that is just three that I can identify off the top of my head; there are many more throughout the city. (There is also Lovejoy’s Tea Room, of course, but Lovejoy’s is in a class by itself; it is an English teahouse and isn’t like these more “hip” places that serve fruit teas and bubble teas).

Perhaps demand for fruit teas and bubble teas truly is on the rise, or perhaps the demand has been there and supply is just now catching up. Whatever the reason, it certainly feels as if we’ve reached a saturation point—but that, too, is just a feeling I have that is based on no real data. The fact that Teaquation, Comebuy, and Quickly have been around for as long as they have shows that there is demand for what they are selling; only when tea places begin to close due to insufficient business will we know for sure that we have actually hit the peak.

It is interesting watching the trends in businesses like this. Coffee places, for instance: you have to wonder if we finally have enough of those? And then there is the current fitness trend. Fitness places are springing up right and left these days. After a relative quiet period in the world of gyms, about two years ago 24 Hour Fitness opened their Redwood City “Super-Sport” gym on Broadway, about a block below Woodside Road:

Given the size of the place I thought perhaps that this gym would satisfy the workout needs of anyone in the area who wasn’t already a member of some other gym, and for a while that seemed to be the case. But lately there has been a lot of activity on the fitness front in Redwood City, mostly focused around gyms that specialize in particular kinds of workouts.

Not too long ago I watched a “For Lease” sign go up above All Star Karate (at 2636 Broadway, near City Pub). Wondering whether All Star Karate was closing or moving, or whether this was just a negotiating tactic by the building’s owner, I kept my eye on the place. It didn’t take long before I had my answer: after a month or two a sign was posted in the window indicating that All Star Karate was moving. Fortunately they stayed within Redwood City. Their new home will be (they open this Wednesday, June 7) at 2699 Spring Street, in the vicinity of the Stanford in Redwood City project: 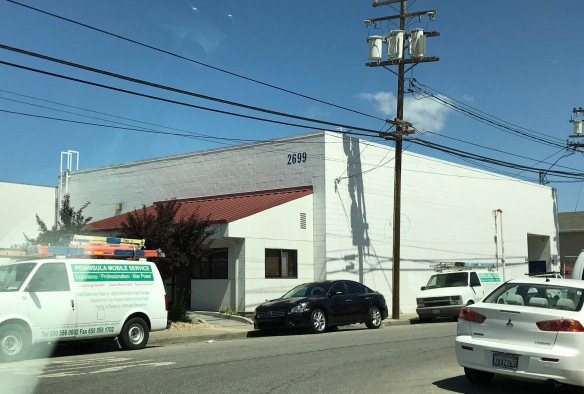 Although their new location isn’t going to be quite as convenient as their old for some, All Star Karate notes that their new place has larger training floors and some free on-site parking.

As for their old location, interior remodeling began almost as soon as All Star Karate moved out, and it wasn’t long before it became clear just who was taking over 5,280-square-foot space: Obstacourse Fitness. 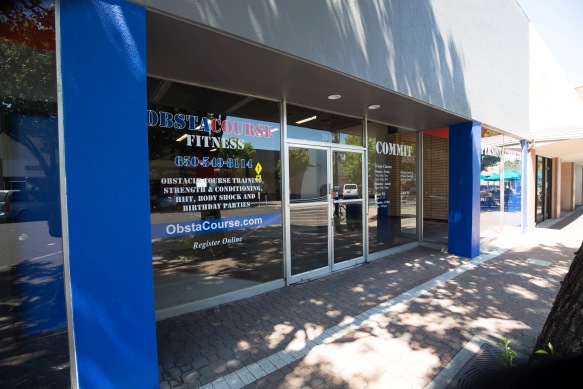 Next up, and the reason for much of my long walk, is Undisputed Boxing Gym. Today you’ll find this boxing gym in San Carlos, at the corner of Industrial Road and East San Carlos Avenue (just across East San Carlos Avenue from the under-construction Residence Inn by Marriott hotel that you can clearly see from Highway 101). But soon they will be moving to Redwood City, into a building that sits between Convention Way and Highway 101. Most recently this building housed Creative Self Storage, but before that it was a Harley-Davidson motorcycle dealership:

Remodeling is currently underway. When done, the building will have a 20’x20’ boxing ring, a 36’x36’ space dedicated to punching bags, a raft of stationary bicycles, and five designated training areas—in addition to men’s and women’s locker rooms and restrooms, a reception area, retail counter, juice bar, and lounge. All of that will be on the building’s ground floor. The small second floor will be used for offices, a conference room, and storage.

Undisputed Boxing Gym’s building plans were reviewed and approved by Redwood City’s Zoning Administrator at the end of March, and the contractor applied for building permits in May—so although you may have noticed the “coming soon” signs on the Highway 101 side of the building for some time now, work has really just begun and will likely take a while.

As for what they do, Undisputed gets people in shape through boxing. From their website:

Undisputed Boxing Gym takes fitness to the next level for undisputed results. Set to high energy music that gets you going, you’ll learn boxing forms and techniques through a series of routines that focus on kicking and punching, including intense bag intervals. Burn calories, tone your body, and leave the gym feeling unstoppable.

Any discussion of gyms in Redwood City needs to include an update on Powerhouse Gym’s move from the corner of Jefferson Avenue and Broadway to the former DB Shoes space, which is just across Broadway and a couple of doors down. Two or three weeks ago DB Shoes completed their closing sale, immediately after which crews moved in and emptied the space out in preparation for the gym. Retrofitting the space is a project that will take a couple of months, though, so at least for the summer members of Powerhouse Gym will continue to use the existing facility.

According to Powerhouse Gym’s website “the new location is of the same approximate size as our current ground floor.” However, a close look at the plans shows that they currently have considerably more space, in total, than they will in their new location (which will still be quite sizable). Because I don’t actually know how they are using their current space, though, it is possible that the actual workout floors will be about the same size. Possibly there will be fewer workout spaces, or fewer or smaller offices, or perhaps they simply don’t use all the space they currently have. I do know that, based on the floor plan they show on their website, the bulk of the new space will be configured as one large room that will serve as both a weight room and a cardio area. There will be two smaller rooms, one dedicated to yoga and one dedicated to aerobics, along with the expected restrooms and locker facilities, offices and reception desk.

Once Powerhouse Gym makes their move, we’ll finally see some action on the Jefferson/Broadway corner. The existing building (and everything along Jefferson up to but not including the currently shuttered Howie’s Pizza) will be torn down to make way for the four-story “Broadway Station” building. This building will have retail on the ground floor and offices (along with some retail) on the upper floors. As you may have heard, the Chan Zuckerberg Initiative has leased all of the office space in this building. As for the building’s retail space, I have yet to hear any news about potential tenants.

Getting back to gyms, whenever I head downtown I usually walk along the section of Broadway that borders Sequoia High School. Across the street from the school is an older building with a number of small storefronts. The building’s largest tenant appears to be Gelb Music; their main entrance is on El Camino Real, but they also face onto Broadway. They’ve recently given up some of their Broadway frontage, however. That space is now a small gym called Monarch CrossFit.

Monarch occupies a narrow but deep space that, according to them, is fully equipped to get people into “amazing shape.” They offer individual as well as group training. But be aware that CrossFit isn’t your typical workout, and it isn’t for everyone: it’s very intense. Monarch CrossFit welcomes visitors, but if you’ve never heard of CrossFit I would suggest doing some research before signing up.

Monarch’s facility is somewhat understated from the outside; I might not have noticed them except for the fact that one morning, as I was walking by, I saw a handful of people working out on some sort of equipment that had been set up right on the sidewalk. After that I noticed a number of signs advertising the business, taped up on public signposts around the city. Putting signs on posts meant for stop signs and crossing lights is a no-no, I believe, but I must admit that they did get my attention. I haven’t seen those signs in the last week or so, though, so perhaps they’ve gotten the message. In any case, if you are looking for CrossFit, you’ll find them at 2732 Broadway.

We all have our preferred ways to get in shape. Personally, I like to get out and walk. My wife prefers to work with a personal trainer. And many of my friends are members of various gyms around the city. Working out is not a fad, although some of the ways that people work out today just might be. With all of these new workout places, perhaps now there is something for everyone. Because of their narrow focus it is hard to say whether we have reached “peak gym” yet, but, whether or not we have, I wish these new businesses well. If nothing else I’m grateful that they are keeping our storefronts filled.

3 thoughts on “Working Out”