For so long it seemed as if all the development action on the peninsula was taking place in Redwood City, but no longer. Menlo Park has a number of projects in the works; you need only drive south on Highway 101 to see some of their largest ones. And San Carlos really seems to be taking a page out of Redwood City’s development playbook. Even as the bulldozers move in on projects throughout the city, San Carlos’ list of projects that are either proposed or in active development keeps getting added to. It has been a while since I’ve taken a walk through San Carlos to check on the progress of their various projects, so this week, before the rains hit, I laced up my boots, strapped on my camera, and headed north to see what’s up. As it turns out I got a little bit wet, but I learned a lot, so it was worth it.

San Carlos’ two most high-profile projects are making slow progress. Work on the Transit Village project is currently concentrated on the parcel north of Holly Street, where four of the project’s six residential buildings will be constructed. Having prepped the soil for foundation work, the developers appear to be trenching and running underground pipes for the utilities that will service those four apartment buildings. As for the Wheeler Plaza project, the developer has begun to underground utilities needed for that project, and has also been prepping the blue apartment building located at 657 Walnut Street for demolition. The buildings along San Carlos Avenue that will be torn down as part of this project continue to sit empty, with no visible evidence of preparations for demolition. However, those buildings are scheduled to come down soon, so expect some very visible (and exciting!) activity on the site in the next month or so.

Incidentally, I should point out that the handful of boarded-up storefronts along Laurel that back onto the parking lot that will largely become Wheeler Plaza are not actually part of that particular project. The remodeling of the buildings that span from 644 to 668 Laurel Street is a separate development effort by JMS Partners that will turn what once was a series of eight single-story storefronts into seven, some of which will be single-story and some of which will be two-story. This project is coordinating with the Wheeler Plaza project where it makes sense. In particular, the current utility under-grounding that is taking place behind those buildings is being done to the benefit of both projects.

The Wheeler Plaza and Transit Village projects are going to be huge, and will have a marked impact on San Carlos when they are complete. But for now, the most interesting development activity is taking place elsewhere: primarily along Industrial Road and along Laurel Street.

The new San Carlos Honda dealership being constructed at 777 Industrial Road is making great progress. I’ve written about this project before: when complete, this will be the new home (and name) of Honda Redwood City, which today you can find at the intersection of Hopkins Avenue and El Camino Real. Previously there was little to see: just an empty lot where the dealership would one day stand. But since then the developer has been busy erecting countless concrete structures that together will make up the new dealership:

The design for the dealership’s main building is particularly interesting: it will largely sit on “stilts,” leaving almost the entire property at ground level free for the storage of cars. In the above photo those concrete pillars are the stilts upon which the building will stand; the concrete beams that span those pillars will serve to support the two stories of showroom, service department, and offices.

Just down Industrial from the Honda dealership, at the corner of Industrial Road and E. San Carlos Avenue, workers were busy pouring concrete for the new Landmark Hotel project. When complete, this will be an upscale four-story, 204-room extended-stay hotel, with each room having its own kitchen.

This may not be the area’s only hotel, however. For those looking for a more conventional hotel experience, San Carlos has recently received a proposal for a Hilton Garden Inn to be located at the corner of Brittan Avenue and Industrial Road. This new seven-story hotel building would replace the two-story light industrial building that stands there today:

Note that it will only replace the building in the foreground of the above image; the buildings between it and the freeway (towards the right edge of my photo) would remain.

As proposed the hotel would have 162 rooms and four levels of parking with 158 or so spaces for cars and 26 for bicycles. The developer has submitted some basic plans, which include this rendering: 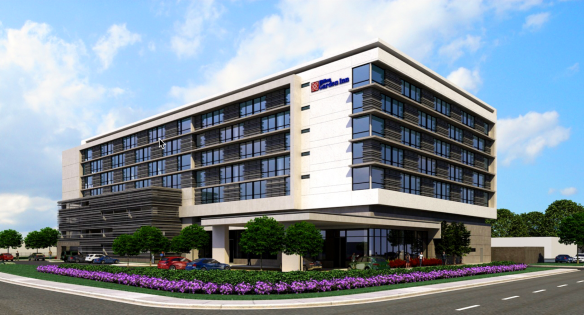 Quite a change, eh?

One San Carlos building project that I am glad to finally be able to take off my list—since it seems to be about done—is the four-story mixed-use building located at 1673 Laurel Street (close to Saint Francis Way). As if its pea-green and bright orange accents aren’t enough to make it stand out, the fact that no other building on the block is more than two stories high makes this one hard to miss:

The building’s upper three floors contain a total of six apartments (two per floor). The ground floor, however, is a commercial space, and I’m delighted to see that the space already has a tenant: a soup and salad restaurant called The Toss. The Toss is the brainchild of local San Carlos resident Tracy Everett. Although she hasn’t had any formal experience as a restaurant chef, her instincts seem good: we can always use more quick-but-healthy lunchtime options. Tracy hopes to open The Toss by mid-November, so keep an eye on them if this kind of thing interests you.

Further justifying the need to get out and walk when investigating projects such as the above, as I was exploring the back of the building I came across a project that only recently made it onto my radar: what appears to be a new residential building (likely a multi-family building, but it could be a single-family one) that, although its address is 1661B Laurel Street, is really only visible from the back alley: 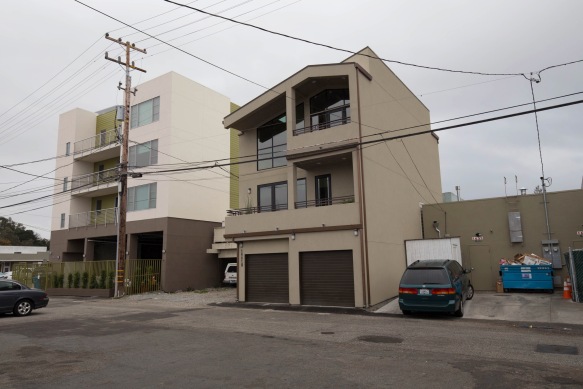 It is either all new, or it is a serious remodel. I have yet to find out anything about this building, so if anyone has any information, please share…

Another San Carlos project that I’m happy to put into the “finally” category is the little building at 1510 El Camino Real, to the right of the Mints and Honey place: 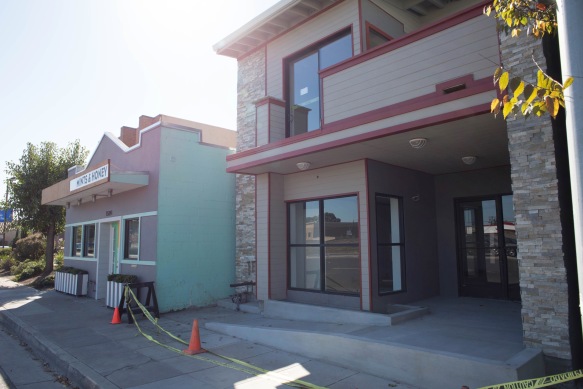 Something clearly happened with this project: either inspection issues, or financing problems, or maybe the crews were simply pulled off the project onto another job. Whatever the problem was, this building seemed to be about 90% done when work seemed to stall. It then sat many months with construction fencing in front and no visible activity going on either inside our out. Weeds were growing and the privacy fabric on the chain-link fence was starting to rot when finally the handicap ramp was poured and the fence was removed. Now that the building appears to be complete, expect to see a “For Lease” sign go up soon. This is a mixed-use building, with a 1200-square-foot commercial space downstairs suitable for retail, office, or restaurant; and a two-bedroom, two-bathroom apartment upstairs.

Taking another leaf out of Redwood City’s playbook, in what may be a first for San Carlos the ever-popular drinking and dining spot Town looks to be expanding their sidewalk seating out into the street, consuming a couple of parking spaces in the process:

For years now Town has had a handful of outside tables along its front windows, but to keep the sidewalk clear for pedestrians they’ve been limited in the number of those tables. As I reported last week, here in Redwood City we’re seeing an increasing number of restaurants expanding into the parking strip, especially along Broadway. Given the number of restaurants along Laurel in San Carlos that offer outside seating, I expect to see more restaurants follow suit, once Town has paved the way, so to speak.

One last point of comparison. As I walked around town I was struck by just how many of San Carlos’ utility boxes have been or are being transformed by artists. When Redwood City first started its utility box art program it did so cautiously, first approving only a couple of boxes. When the city saw the results, they okayed a much larger, city-wide program. I may be wrong, but it seems as if San Carlos simply jumped in with both feet: freshly painted boxes are appearing all over the city. Since the idea didn’t originate with Redwood City—numerous cities throughout the country began painting their utility boxes long before we did—I can’t assume that San Carlos actually got the idea from us. However, the success we’ve had with the program probably influenced them in some way. Regardless, I’m glad that they are doing it, too—I think the painted boxes are subtle but ultimately powerful influencers of people’s opinions regarding the city, and well, they’re just fun.

Although I am well aware that San Carlos has its own agenda and is not really following Redwood City’s lead, based on the variety and number of development projects they seem to be reacting the same way to the same forces as Redwood City is. The strong demand for housing, office space, and hotels is causing developers to take a close look at cities up and down the Peninsula, causing similar transformations to occur in both communities. While San Carlos may not really be taking a page out of Redwood City’s playbook, the net effect is the same: construction (and art!) is going on all over town. Just as Redwood City is undergoing some fundamental changes, so, too is the basic character of San Carlos as a sleepy little residential community changing. Whether or not that is for the better, we’ll just have to wait and see.

In response to last week’s article reader kat156 passed on the information that Lovejoy’s Tea Room, a popular British tea room currently located in San Francisco, is opening a second location on Main Street in Redwood City. I did a bit of digging and then dropped by their upcoming location at 901 Main Street to see how things were going. I must say, they got a fantastic spot, just across Stambaugh from Savers:

From what I can tell, the retrofit of the former beauty salon is just about done; Lovejoy’s should be opening very soon! Although they have a website specifically for the Redwood City location, it has very little information on it at this time. To get a real flavor of the place (including a menu) you’ll want to check out their main website. Although I have not tried their San Francisco location, I plan to check out their Redwood City store once it opens: I really enjoy a proper English tea (with scones, if they are anything like what you get in Britain). And I know that my wife and many of her friends will be checking them out: ever since The English Rose (which was on Laurel Street in San Carlos) closed, our area has been lacking a good tea room. Hopefully this is it!