Living in Redwood City and focusing on it as I do makes it easy to develop the mindset that we’re something special (but we are!), and that the issues we are facing are unique to our mid-peninsula city. But one needs only to look north to San Carlos to realize that they, too, have several large development projects going on at one time—projects which are likely to have major effects on the daily lives of current San Carlos residents. Although I haven’t yet really dug into Menlo Park’s projects, I suspect that Menlo Park will also see a major shift in how residents and area employees go about their daily lives once their own projects all come online (including the ongoing additions to Facebook’s West Campus; the massive Menlo Gateway project, just south of Marsh Road and east of 101; and their own Greystar apartment development, also located east of 101, north of Marsh Road, behind the Porsche dealership).

When I awoke last Monday I had not yet settled on a theme for this week’s post—and thus didn’t yet have a plan for where I was going to walk. After deciding that I’d probably just do some wandering to see what I could see, upon perusing the day’s news I came across an article about the San Carlos Planning Commission’s review and approval of the proposed “Meridian 25” project. It occurred to me that it had been a couple of months since I last gave our northern neighbor some exposure…and just like that I had a direction for that day’s walk. I went through my list of San Carlos projects and mapped out a nice walk that turned out to be just short of 9.5 miles.

On my way to my first stop on Industrial, though, I made a brief detour within Redwood City: I wanted to take a closer look at something that I had noticed—it’s hard to miss—in front of the 7-Eleven store on El Camino Real (just north of Whipple Avenue):

This bright yellow box is what is known as an “Amazon Locker,” and is a place to which you can send your Amazon purchases. Why would you do this? There are two main reasons. First, it provides a more secure destination. Rather than having your purchases remain in public view on your doorstep while you are at work, you can have them sent to this locker, where they will remain safe until you drop by to retrieve them. Second, it gives you some flexibility: you have three days to retrieve your purchases, so if you need extra time—if you are traveling, perhaps—it buys you a couple of extra days. But note that you must pick them up within three business days (you’ll receive an email notification or text once your package is placed in the locker; that’s when the clock starts), or else your purchases will be returned to Amazon for a full refund.

How does it work? Well, first you add the locker to your list of mailing addresses for your Amazon account. To add this particular box, simply navigate to the locker’s URL (http://amazon.com/addIda). Or, in your Amazon account settings, navigate to Manage Addresses and 1-Click Settings > Add a New Address and search for an “Amazon Pickup location near you.” Next, place your order and have it sent to the locker. Once you receive the email or text message indicating that your package has been delivered, simply go to the locker and enter the code (or have the locker the scan the barcode in the email message). The appropriate locker door will open, revealing your order.

If 7-Eleven near Whipple and El Camino isn’t convenient to where you live, note that Redwood City currently has two other Amazon Lockers: one is at the Milagros de Mexico market, on Woodside Road between Oxford and Gordon streets, while yet another is in Redwood Shores, at the Nob Hill Foods market. There is also one in San Carlos (at their 7-Eleven, on Holly Street), and one in Menlo Park (at the 7-Eleven on Oak Grove Avenue).

From the locker I headed to 837 Industrial Road, where Windy Hill Property Ventures, the developer, hopes that their Meridian 25 office development will one day rise. Altogether six properties make up the site—a site that is nearly eight acres in size, ranging along the east side of Industrial Road between Commercial Street and Bransten Road and extending all the way back to the Bayshore Freeway. Currently you’ll find six rather nondescript one-story tilt-up buildings there: 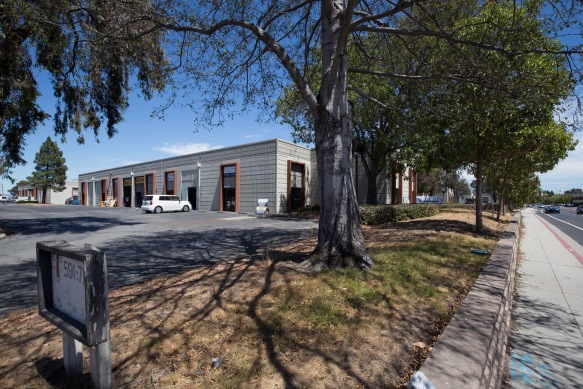 What has my attention about this proposed project is its sheer size: in total, the matching pair of six-story office buildings would total 528,520 square feet. For comparison, the two Crossing 900 (“Box”) buildings in Redwood City add up to just 300,000 square feet. The development’s other feature, a six-story parking garage (three levels would be below ground, and three above) is planned for the rear of the property, up against Highway 101.

The development is billed as “extremely transit oriented” but I wouldn’t call it that. From the San Carlos train station Meridian 25 is more than nine-tenths of a mile away, either by car, by bus, or on foot (and the Redwood City train station is farther still). Planning on taking the bus? Although SamTrans does service the area today, it does so only with a single pilot route labeled “FLXS”; depending upon the result of the one-year pilot there may or may not be buses running along Industrial in the future. FLXS does travel between the San Carlos and Redwood City train stations, so at least while it is running that is one way to get to the Meridian 25 site. But that is it for transit. Other than that, unless employees live in the immediate area they’ll likely be driving. From the intersection of Holly and 101 it is about half a mile, while from the Whipple/101 intersection it is roughly a one-and-a-quarter mile drive. While I can’t say how many cars will make the journey to and from the site every week day, it seems safe to say that the traffic on Industrial will get quite a bit heavier during commute hours if this project is indeed built.

Meridian 25 is scheduled to go before the San Carlos City Council soon; San Carlos residents who wish to have their opinions heard should keep their eye on upcoming meeting agendas.

Continuing down Industrial I came to the next project on my list: the site of the future San Carlos Honda dealership. This site, at 775 Industrial Road, is a “flag lot” that sits entirely behind the Melodic Remedy Dance Studio. The driveway to access the dealership runs alongside the studio, on the south side. You can best observe progress by walking into the studio’s parking lot on the north side of the building, however:

Demolition of the small shed that once stood at the north end of the property, and the concrete paving that formerly covered the rest of the property, is done. When I visited there was just a small pile of concrete rubble left to haul away, and a good-sized snarl of rebar ready to be taken to the metal recyclers. Earth-moving equipment is prepping the ground for foundation work.

San Carlos Honda recently picked up two additional small parcels out on Industrial, adjacent to their driveway. Apparently someone realized that having the dealership hidden entirely behind the dance studio wasn’t such a great idea, and that they should have more of a presence out on Industrial. Thus, the purchase of both 777 and 787 Industrial Road, where for now you’ll find two small block buildings that formerly housed San Carlos Radiator and San Carlos Auto Center. The plan is to level those buildings and use the property for signage and for the prominent display of for-sale automobiles.

Continuing down Industrial, I came to the next major project currently underway: the Landmark Hotel site. Here, too, the property has been cleared and heavy equipment is moving dirt around. But this site is seeing a bit more action: a giant auger is being used to drill holes in the ground, presumably for foundations (the building and its parking are above-ground; no subterranean parking for this project).

Next I walked on to San Carlos’s new Orchard Supply Hardware, which is fully stocked and very much open for business. On the way to and from I was somewhat saddened to note that Morrison School Supplies is closing; it seems that the proprietors have decided to retire, and will close after this year’s back-to-school season. In any case, after OSH I retraced my steps to Holly Street and checked in on the Transit Village project. Here, too, you’ll find the same song: heavy equipment moving dirt around:

From there I walked home by way of Wheeler Plaza (where not much is happening, except that all of the tenants of the existing building—including the Adult Community Center—have moved out) and Laurel Street.

I noted that all of the tenants of the buildings that make up the “644-668 Laurel” project (including Laurel Leaf, Mi Ranchito, Plantation Coffee Roastery, and more) are out; that particular project seems just about ready to get underway. Fortunately most simply relocated—only two or three went out of business.

When I reached Howard Avenue I peeked over the construction fences where The White Oak Flower Shoppe once stood. I had previously made a handful of visits to the site hoping to see the actual demolition of the building, but wouldn’t you know it, they tore the building down while I was visiting my kids in Oregon. At least they did a nice, neat job: the land is clear and ready for the next step: the construction of two apartments over two ground-floor retail spaces.

At least I’ll get to watch the construction, which will undoubtedly go on for a while.

The next time I make an excursion beyond our city’s borders I plan to switch directions and head down into Menlo Park. I want to get a good look at what Greystar is doing to their little city, as well as get some pictures of both that and the Menlo Gateway project, which got underway a month or so ago. I also hope to walk up Marsh Road and see how the project to repair the Atherton Channel that sits alongside the road is going (this project has a section of Marsh Road completely closed through mid-August of this year). Perhaps I’ll call that post “Southern Exposure”! For the next couple of weeks, though, I’m back to focusing on Redwood City. After all, there continues to be a lot to write about in this special place we call home.