Last Saturday, May 7, I conducted my first group walk for readers of my blog. Not knowing quite what to expect, I was delighted when seventeen people (and one dog, plus one infant in a stroller) showed up at 10:00 a.m. to join me in an informal tour of the Inner Harbor area. Fortunately, my fears for the weather proved to be unfounded: although we did encounter a couple of raindrops—mostly on the return journey—there was never enough rain to cause us to break out the raincoats or unfurl the umbrellas. It actually did start coming down just after the walk concluded, but for the two hours we were out on foot, we were all quite comfortable.

The roughly 3.5-mile walk (round trip) followed Maple Street over Highway 101 to the entrance to Docktown, at which point we then walked through the Docktown parking lot, over the “bridge to nowhere” (this foot and bicycle bridge crosses Redwood Creek just east of Highway 101, right next to our under-development Courtyard by Marriott hotel), and along Bair Island Road to the entrance gate to Bair Island itself.

I chose this walk because it explores a part of Redwood City that many residents are unfamiliar with. Plus, this area is very much in the public eye right now: the City Council just held a “study session” on the area during its last meeting (on Monday, May 9). And finally, I chose it because of all there is going on down there these days, what with the recent completion of the Maple Street Correctional Center, with the proposed Harbor View Place development project, with all of the activity swirling around Docktown lately, with the new hotel being built near the Boardwalk Auto dealerships, with the recent re-opening of Bair Island to the public, and with the active construction going on out at Blu Harbor.

I chatted with various individuals as we walked along, and periodically stopped both to allow the group to coalesce, and to speak about some aspect of the area. Our first stop was by the new jail (the “Maple Street Correctional Center”) where I spoke about both it and the Harbor View Place development proposal.

The above rendering shows Jay Paul Co’s proposed Harbor View Place project. As you can see, Harbor View Place is slated for a very large piece of land. The 27-acre site fronts onto Blomquist Street and backs onto Highway 101, and runs all the way from the Correctional Center to, at one corner, Seaport Boulevard. Thus, it occupies not only the land that once held the Malibu Castle miniature golf course, but also the Malibu Grand Prix site, the Granite Rock building, the Hayward Lumber yard (since relocated to just south of Seaport Boulevard), and the Lyngso property (since relocated to just north of the San Carlos airport). In the above drawing, each of the four eye-shaped buildings (B1 through B4) would be a nine-story office building. The property would also have three parking structures plus some surface parking and, as you can see, a great deal of green space.

Harbor View Place is just a proposal at this point; the presentation to the City Council was part of an Inner Harbor study session and served to acquaint the current Council with the basics. I expect that the actual project submission won’t occur for some time. Note this project isn’t a shoo-in; even if it is eventually approved it may take quite some time to get to that point. Thus we can expect that this land will be sitting vacant for some time to come.

After the group went through Docktown and traipsed over Redwood City’s own “bridge to nowhere,” I stopped on the north end to show a rendering and to talk about the Highway 101 underpass with which the city is moving forward. You may have already seen this rendering; it has been pretty widely publicized. In case you haven’t, however, here it is:

The underpass will sit along the north side of Redwood Creek and will provide a direct walking or biking connection between the end of Main Street (where it curves to enter Kohl’s Plaza, near the Toys ‘R’ Us) to the roundabout in front of the Boardwalk Auto dealerships. This roundabout is right in front of our under-construction Courtyard By Marriott hotel, making it fairly easy for hotel guests and One Marina residents to walk to downtown Redwood City. As well, it’ll make it significantly easier for those of us on the west side of the freeway to get to Bair Island. Personally, I can’t wait until it is done! Unfortunately, though, I’ll have to. Although the city has approved the project, and has the funding in hand (thanks largely to fees paid by the One Marina developer), it now has to go to higher levels of government for approval. And given how slowly our state and federal government typically works, we won’t see this thing open to the public until 2018 at the earliest. Ah, well, better late than never, right?

After the group passed through the gate and crossed over to Bair Island, I again paused and presented a brief review of the Blu Harbor project, which can clearly be seen from the island. Blu Harbor, the new name for Pete’s Harbor, is coming along nicely now. It will eventually consist of some 400+ apartments, more than 300 of which will be in a giant building wrapped around a seven-story parking garage. This garage:

It appears that the garage structure is nearly complete, so construction of the apartments around this huge concrete block should begin soon. In the meantime, the remaining apartments, which will be spread around the property in ten separate 10-unit buildings, are well underway. The following photograph shows some of those smaller apartment buildings. It also shows the footings being constructed for the large clubhouse and pool that will be for the exclusive use of Blu Harbor residents and guests.

Fortunately for the rest of us the harbor itself will be open to the public—the slips will be available to all, and not just to Blu Harbor residents—and there will be trails and public areas around the perimeter of the property. There will also be a small ramp for the public to launch smaller hand-powered watercraft (canoes and kayaks and such).

That was largely the extent of our walk, but I also wanted to mention one other project that is in the planning stages in this part of town. That project is the reworked Highway 101/Woodside Road interchange. Long in the planning stages, the final design is nearly complete. I attended a presentation by Caltrans on April 28 in the Council Chambers, and the same basic information was presented to the City Council at last Monday’s Council meeting. For those who were unable to attend either meeting, the two leading proposals, one of which will become the final design, can be found on the city’s website. We are in the middle of the public comment period for the project, so interested residents are encouraged to review the presentation and provide feedback online. Public feedback will only be accepted until May 26, so get those comments in!

For those of you who were unable to make it to my walk but would have liked to, I do plan to schedule another one soon. I haven’t yet decided where we will go, so if you have any ideas by all means let me know by submitting a comment. Once I’ve decided on the particulars I’ll post the information here on this blog, using the “Group Walk Information” link near the top of the page (just below the Climate Best arch picture).

Beyond the walk, there are a number of other interesting things going on throughout the city. Lately I’ve been talking a lot about the 601 Marshall Street project—mostly about how nothing seems to be happening—and sure enough, that was all it took, apparently. In the last week the construction fences went up, and the small buildings that were currently there started coming down:

Note that you can see the new Locale apartment development in the background; the two projects are only separated by a dead-end section of Fuller Street.

As regular readers also know, I’ve also been keeping a close watch on the former Emerald Market shopping center, at the intersection of Oak Knoll Drive and Canyon Road (kitty-corner from Canyon Inn). I’ve been told that one of the restaurant spaces—Kaigan Sushi—is very much open, and that the other—Hillside—should be open by the time I post this. Personally, I can’t wait to check them out! The market doesn’t appear to be very far behind, although it is not yet open, unfortunately. The restaurants are located to the far right as you face the market, and are currently only identified by cloth banners above the porch: 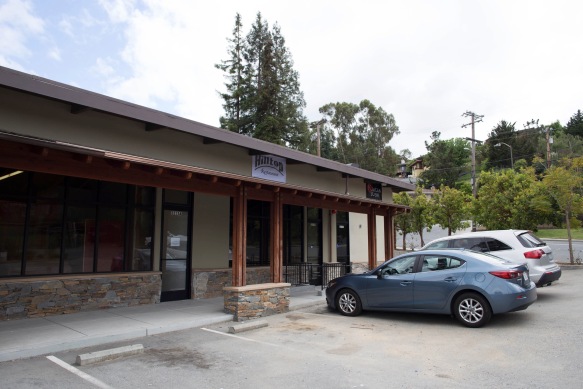 Lastly, at least for this week, “Downtown,” the restaurant at the corner of Broadway and Redwood Creek Crossing (the small alley that leads to the Marshall Street parking garage), has closed. I had been wondering about this place for some time; although there has been a restaurant in this spot for a number of years now, they just haven’t seemed to have had much luck attracting patrons. Fortunately, I’m told that the spot is being taken over by the proprietor of Yokohama Japanese Bistro, who currently occupies one of the tiny spots on Broadway just a couple of doors down towards Jefferson Avenue (next to Talk of Broadway). Although I haven’t been in there myself, I’m told that Yokohama is doing very well and could really use a larger space. Thus, the expansion into the much larger “Downtown” spot should work out nicely.

It’s exciting to see local businesses doing well, and others establishing a foothold in Redwood City. I plan to check out the two new restaurants, as well as the market when it opens. With all of this activity it’s a great time to be living in Redwood City, and a great time to be out exploring it on foot. Whether you join me on a group walk, or simply get out on your own, our weather lately is just about perfect. And with all there is to do and see out there, there is no better time to be walking Redwood City!

On Monday, May 16 at 7:00 p.m. the City Council will be holding a Town Hall meeting at Our Lady of Mount Carmel Church, at 601 Katherine Avenue in Redwood City. This is a great opportunity for citizens to give feedback to the Council. Indeed, such meetings are solely for this purpose. If you have an issue or want to express your opinions to the City Council on any relevant topic, I would urge you to attend and make your voice heard.

4 thoughts on “All Together Now”