As I walk through Redwood City’s residential areas, I naturally see front yards. A lot of front yards. Because my wife is a landscape designer, when I look at yards I try to see them as she might. I could never make it as a design professional, but I have learned a thing or two from her. Such as, when designing your yard you need to plan for growth, and not expect your newly installed landscape to look full and lush right off the bat. As well, she’s taught me the value of varying plant heights, textures, and colors. And I’ve learned to appreciate foliage; while some flowers are nice, plants without flowers can be as beautiful, or even more beautiful, than their flowering cousins. Finally, I’ve picked up on her love for native plants, and her strong feelings that here in California we should be eschewing lawns in favor of landscapes that will thrive here naturally.

And so I spend a lot of time looking at yards. Leaving the design to the professionals, my eyes are drawn to yards that stand out; yards that are different from the norm. I cheer those homeowners who have the courage to tear out their conventional lawns and shrubs and replace them with a well thought out, made-for-California design. I have less charitable feelings towards new installations that are unimaginative, and that simply put in a water-wasting lawn when one isn’t really needed. Such as was done at 99 Nevada Street.

I watched the transformation of the house at 99 Nevada with great interest. Formerly a tired, typical ranch home of the style built here starting in the Nineteen-Forties, the developer essentially demolished the entire house (leaving just enough to qualify as a “remodel”) and started over. I was so pleased to see what they built: a modern take on the ranch home, rather than a McMansion. During the construction I observed that the house had a well (for landscape purposes) which the developer was careful to preserve. I had hoped, given the amount of money and care put into the home’s construction—the final asking price was north of $2 million—that they would take equal care with the landscaping. But no, as the construction wrapped up and the landscapers moved in, here came the sod: 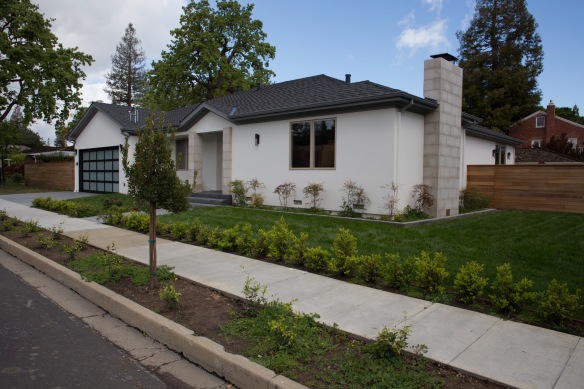 There are so many water-friendly ground covers that could have been used instead. I suspect that this is just for looks, and to satisfy buyer’s expectations and thus help the house sell. But isn’t it time that we changed those expectations?

If the house in the above picture looks familiar, I’ve written about it before. It was completed and listed last December, and a “Sale Pending” sign went up a month or two later. But curiously that sign has been taken down; it appears that the potential sale may have fallen through and that the home may once again be on the market. You can find an online listing at 99Nevada.com. I find it curious that there is no price listed…

As I walk around I’m seeing more and more places where people have ditched their lawns. Many are taking advantage of the Lawn Be Gone program to get reimbursed for replacing their lawns with drought-tolerant landscaping (in Redwood City, the program pays $1 per square foot—but be aware that you have to follow their requirements pretty carefully). I’m particularly pleased when larger organizations, such as churches, get in on the action. As did our own Unitarian Universalist Fellowship, at the corner of Brewster Avenue and Lowell Street: 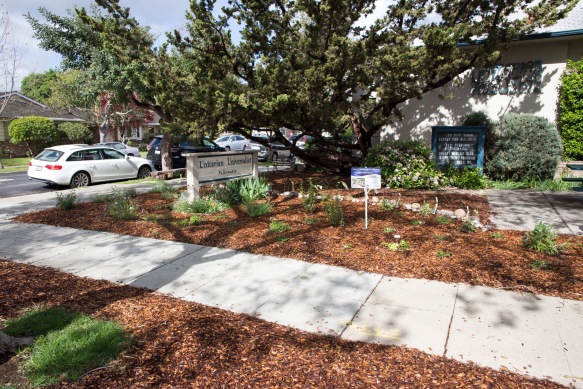 This landscaping is worth a visit. It is a great example of the kind of thing you can do instead of a lawn (note that the plants have a lot of growing to do; this front yard will look quite different when the plants grown in). In a particularly nice touch, they’ve labeled a great many of their plants, so if you see something you like you won’t have to wonder what it is. On the Lowell Street side they have some raised beds and some nice benches, making this a great place to get some ideas for your next gardening project.

Once you get over the idea that a front yard should be mostly lawn, you open yourself up to a whole host of possibilities. As several people have realized, front yards can be productive space. Some have even realized that they can use their front yards to grow food, as this house on Harrison Avenue (across from Whole Foods) is doing: 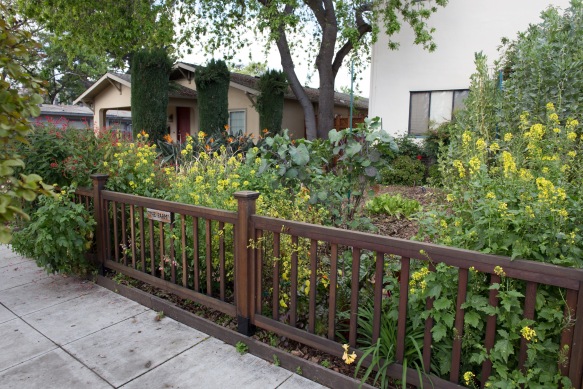 The garden is so lush it’s a bit hard to photograph, but I got a kick out of the sign on their fence (“The Farm”). It doesn’t show in the photograph, but they have another tiny sign within the garden that boasts “Organic veggies, premium potting soil, organic fertilizers, homemade compost.” Obviously, they are proud of their yard, as they should be!

Before you say, “But Greg, I live in an apartment, not a single-family home,” take a look at this place on Duane Street, across from McKinley school: 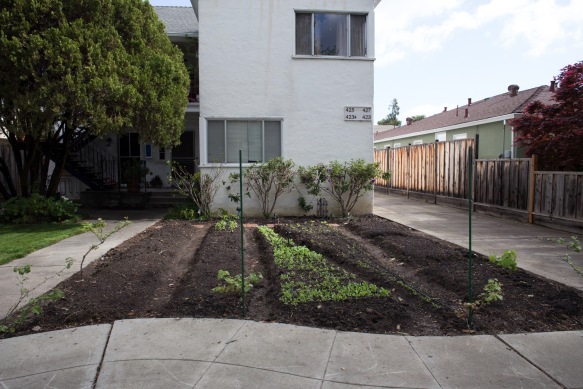 I’m not quite sure what they’ve planted, but those poles make me think that they’ve put in some vines of some sort (beans, perhaps?) in addition to whatever is in those central beds. I’ll have to pay them another visit once the plants have matured somewhat. Certainly not every apartment dweller is going to be able to do something like this, but the above building shows that it might be possible.

Gardens aren’t the only way you can make productive use of your front yard, of course. How about putting in chickens?

Chickens aren’t for everyone, and most people who have them put them in their back yards where they are easier to fence in, but if you have the space in front, why not? This particular place is on Roosevelt Avenue, right next to the Community Activities Building at Red Morton Park. Oh, and I give them bonus points: they have a Little Library just outside their gates (not visible in the above picture). Since I first wrote about these mini lending libraries (One for the Books, February 6, 2015), I’ve seen increasing numbers of them all throughout the city, which pleases me to no end. Now if I could just find the time to build mine…

I found the above house while I was checking out the current status of Red Morton Park. Redwood City’s 30+ parks are an ideal resource, particularly for those who have taken out their lawns but still occasionally need some open space in which their kids can play. Since the beginning of the year the city has been actively working to replace the artificial turf on three of the sports fields at Red Morton, as well as redoing the tennis courts. El Niño has interfered somewhat, causing things to go more slowly than the city would have liked, but my visit there earlier this week showed me that the contractors are taking advantage of every opportunity to get work done—and that they appear to be in the final stretch. For instance, Griffin Field is getting its turf installed, and should be ready for use in a couple of weeks:

McGarvey Field, on the other hand, is not quite as far along, although the ground has been prepped and seems ready for its layer of artificial turf. I understand that it will be next, once Griffin Field is done: 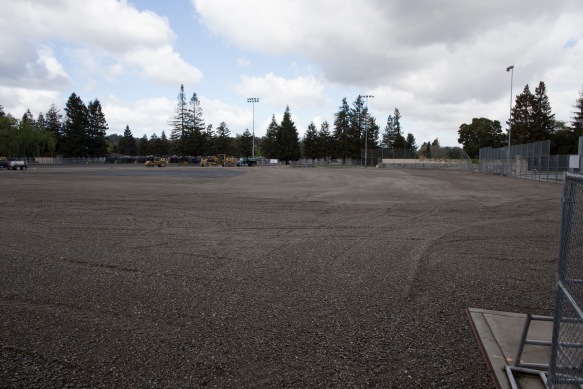 After McGarvey Field, Mitchell Field will get its turf applied. As for the tennis courts, well, they seem to be making slow but steady progress. The perimeter curbing and fence posts are up, and it appears that the courts themselves will soon be paved:

Given the stretch of good weather that we appear to be facing, it shouldn’t be too long now before we regain the use of these popular sports facilities at Red Morton Park.

While on the subject of parks, I wanted to note that the expansion of Jardin de Niños park (at Middlefield Road and Chestnut Street) will hopefully begin soon. The run-down old house on the adjacent property that will become part of the park has been torn down, and the property looks ready for construction:

(In the above photo the existing park is straight ahead, through the trees. The street to the left is Middlefield Road). I was told by the park’s designer that this new section is intended to be a quiet space for older folks who want to enjoy the park separately from the children at play. I should note that I took the above picture in late February, however, and nothing has happened since. Hopefully the work will begin soon.

A home’s front yard is part of the face that it presents to the public. I’m pleased to see that more and more Redwood City homes are updating those faces with plantings that are appropriate for where we live in California. Lawns are great for parks, for sports fields, and for golf courses, but for most yards in California they not only make no sense, they just aren’t necessary. Especially given that you can get paid to remove your lawn, if you have one, now may just be the ideal time to go native.

Unrelated to any of the above, but just because things continue to move along, I wanted to provide an Emerald Market update. The two restaurant spaces look pretty much done, and it appears that someone is assembling tables inside one of the spaces. There are no signs on the building, though, and no “help wanted” signs up, so don’t start planning to attend any openings just yet. As for the market, though, all of the developer’s attention now seems to be on that space. Its interior is quickly taking shape. From the looks of it, it is definitely a market, and they are not just building it on spec:

The red banding over the refrigerators (which cover most of the back wall and the entirety of the right-hand wall) make me think that there may be a particular brand involved, although a specific one doesn’t immediately spring to mind. Does this place look familiar to anyone? The counter on the left just has to be the checkout counter, and I assume that once the floors are cleared there will be a couple of grocery aisles in the center. It’s getting close! I’ll keep checking in on this place, and will keep you posted on any interesting developments.