I love to read. I give full credit to my mother, who also loved to read. When I had children of my own I determined to pass my love of reading on to them, so we established a regular evening ritual of reading together aloud. That quickly became my favorite time of day: a quiet bit of the evening when I could sit between my two boys and read to them, usually followed by a discussion of what we read and, once we had moved into “chapter books,” speculation on what might happen in the next chapter.

Having children proved to be a great excuse for me to seek out books that I remember reading as a child. I have many favorites among the books that I grew up reading, and I can identify the handful that I believe clearly shaped who I am today. One of those, one that spurred my love of buildings and construction, is Mike Mulligan and His Steam Shovel, by Virginia Lee Burton.

If you haven’t read it, do. It’s one of the classics of children’s literature. Essentially, Mike Mulligan owns a steam shovel and is finding work harder to come by in an era that is embracing modern diesel-powered excavators. But he finds a small town that needs a cellar excavated for its new town hall, and in an effort to prove that his steam shovel is as good as any modern machinery he boasts that he can do the job in a single day. He wins the job, and by working furiously from sunup to sundown he completes the excavation. In his haste, however, he neglected to construct a ramp by which he can get his steam shovel out of the hole. What does he do? Well, I won’t spoil the ending; you’ll just have to read it.

There is no question that Mike Mulligan stoked my fascination with building construction, and with the excavation process that often marks the beginning of a major project. We here in Redwood City have experienced a number of such projects in the last several years, and we have three in the “steam shovel” phase right now. I walked downtown the other day to check on these and on a couple of other projects, and spent a great deal of time, especially at the first site, just watching the machinery work.

While they haven’t quite gotten to the digging phase yet, I was amazed to see how quickly the entire block dedicated to Greystar II (103 Wilson) has been cleared. This block once held a four-story concrete-block apartment building, a cute but dilapidated old house, and a couple of light industrial buildings. When I dropped by earlier this week, all that was left was a portion of the apartment building’s first floor and two exterior walls from one of the light industrial buildings. The remainder of the property had been completely cleared, and the heavy machinery was busy recycling the rubble that once made up the buildings. I marveled at the skill of the excavator operator as he transferred the rebar that was piled on the ground into a waiting truck trailer. 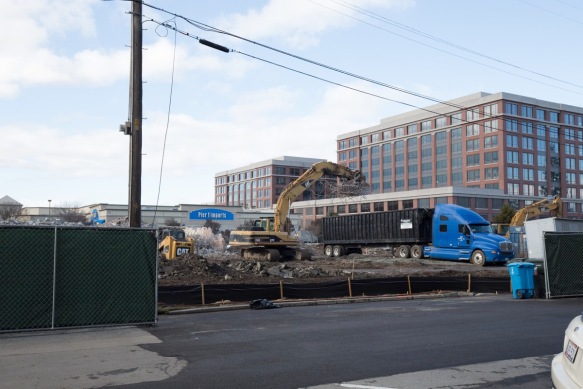 Very soon the site will be clear and the digging of the parking garage will begin. As a reminder, this is the latest project from the builder of the now-complete Franklin 299 project. It will be a seven-story, 175-unit apartment building.

Another site within Redwood City where we conceivably could have seen Mike Mulligan working is at 815 Hamilton, right behind the Fox Theatre. Construction on the five-story office building will commence once the underground parking garage and foundations have been completed. This garage will connect with the large garage under our Century Theaters complex, and will thus not only give us more parking on nights and weekends (when the occupants of 815 Hamilton aren’t using it) but will also give us a much-needed second exit from the theater parking garage.

Digging is very much underway on this project, although it is a bit hard to see given the opaque construction fencing. You can get some idea of their progress by observing how much of the blue crane can be seen. Look closely, and you’ll note that although the boom is visible, the crane’s cab is almost entirely below street level:

On to project number 3, which you’ll find at 550 Allerton Street. Here they are constructing a relatively small 6-story office building on what was once a parking lot. Right now work is underway to excavate what will be a two-level, 150-space underground parking garage: 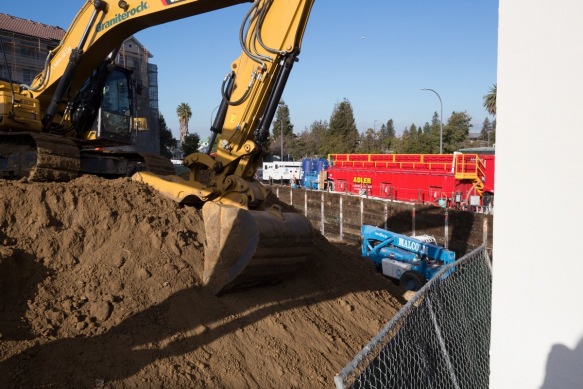 The early stages of any such project are especially interesting from an observer’s standpoint since progress is easy to see. Once a building’s basic structure is complete, however, work shifts largely to the interior and projects become less fun to watch. This has been the case for some time now with our two tallest projects. But both continue to make progress, and both are getting close to the day when they open their doors and welcome new residents.

The Marston building, at 601 Main Street, is the closest to being complete. This 196-unit luxury apartment building is scheduled to be done in early March; from their website it seems that people will start moving in by March 4th.

I spent some time on Marston’s website, and learned that these are luxury apartments indeed. When I looked, there were some 51 apartments available for lease (the remaining 145 may well have been leased already). Of the 51, there were four 548-square-foot studio apartments which ranged in cost from $3175 to $3290. Then there were twenty one-bedroom/one-bathroom apartments. These ranged in size from 711 to 898 square feet, and in cost from $3595 to $3795. Finally, I found listings for twenty-seven two-bedroom, two-bathroom apartments. As you might guess, they aren’t cheap: they start at $4315, and go up to $4585. As for size, they range from 1034 to 1256 square feet.

Amazing prices, aren’t they? And these are for a lease of at least six months. If you want a shorter lease term, the prices go up.

What’s that you say? You want to pay even more for an apartment? Well, Redwood City has you covered. Just head on over to our other large project, the 10-story, 469-unit Indigo apartments at 525 Middlefield Road. At Indigo, the sky’s the limit. You’ll have to wait a little longer, though, since move-in dates appear to be currently scheduled for June 18. From perusing Indigo’s website I found that these exquisite apartments range in size from studios as small as 495 square feet to 3-bedroom, 2-1/2 bath units as large as 1778 square feet.

Let’s get into some prices, shall we? At Marston the studios were around $3200. At Indigo, they’re a relative bargain: they range from $2265 to $2995. The cheapest one bedroom apartment I could find in the Indigo project starts at $2580; for that you get 547 square feet (and one bathroom). But I found much more expensive ones as well: for a whopping $4230 you can get a 952-square-foot one-bedroom, one-bathroom apartment.

Two bedrooms, then. For $3500 you can get a 791-square foot two-bedroom, one-bathroom apartment. But up your budget and you’ll find you can get a two-bedroom, two-bathroom 1554-square-foot apartment for a whopping $6726. Yes, that’s not a typo. Nearly seven thousand dollars. Per month.

Indigo has a select number of three-bedroom, two-bathroom apartments as well. Interestingly, these are actually a bit cheaper than the most expensive two-bedroom units, likely because although they have more bedrooms they aren’t quite as large, in total, than the largest of the two-bedroom units. At Indigo, the three bedroom units I found listings for ranged from $6226 to $6406; their sizes ranged from 1481 to 1505 square feet.

As I said, however, the sky’s the limit, and we’re not quite done. There are three two-bedroom units in which “the sky’s the limit” applies in more ways than one: they are penthouse apartments, and thus they have nothing but sky above them. And then there is their price, which is, frankly, astronomical. Are you sitting down? The cheapest of the three I found listings for, a two-bedroom, two-bathroom, 1635-square-foot penthouse apartment, runs $7616 per month. And then there is the crème de la crème: a two-bedroom, 2-1/2 bath 1778-square-foot penthouse apartment. Asking price? A sky-high $8356 per month (and possibly more if you want a shorter lease; all of Indigo’s prices have a range, and this one actually is listed as $8356-$8405).

And then there is Indigo’s pièce de résistance, if you will. Those prices I just quoted? They don’t include parking. Yes, although Indigo has a large parking garage,a reserved space isn’t included in the cost of your apartment. So if you want to park a car, be prepared to pay $100 per month more for the space. Motorcycle spaces run a mere $50 per month.

Charging for parking may not be as bad as it sounds, however. This is a relatively new concept in planning circles known as “unbundled parking” and it seems designed to discourage driving. Given that many Millennials are rejecting car ownership and instead relying on transit and services like Uber and Zipcar, this can make a great deal of financial sense. And Indigo’s location, just an easy walk from the heart of our downtown, helps to make a car-free lifestyle that much more palatable.

Mike Mulligan would have seen plenty of employment in today’s Redwood City, although I would seriously question whether he would have been able to live in one of the residential buildings he constructed. I’ll be interested to see how quickly all of these buildings find occupants; their success will show whether Redwood City is in tune with today’s economy or whether the building owners are simply reaching too far. In any case, if you want to be able to look out from a lofty height, or merely want the height of luxury in your rented living space, come to Redwood City. Here, it seems, the sky’s the limit.