Last Wednesday at around noontime I was exploring the Crossing 900 buildings and North Plaza. Sitting on one of the oddly shaped benches, my eyes wandered around the plaza, wondering if it was complete, or if there was more to come. Right now it is fairly sparse, with just two standard metal benches, a couple of oddly shaped structures that must also be benches, some very large pots with some simple plantings, and a number of lampposts. I suspect that most people passing through won’t really pay it much attention: 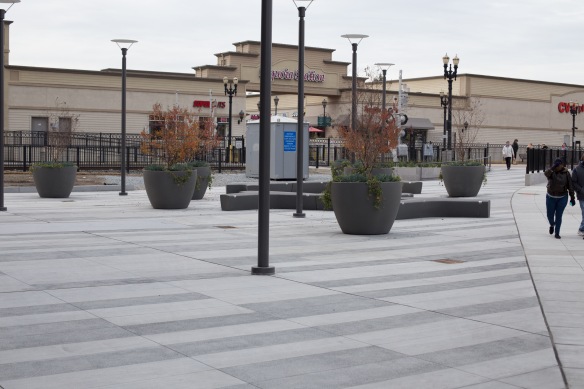 As I sat, I spent some time studying the artistic bench upon which I sat (it’s one of those you can see in the above picture). In addition to the chrome fittings that are clearly meant to deter skateboarders, I noticed that they also have a number of metal straps of the type you use to tie a pipe to a wall or to a floor joist: 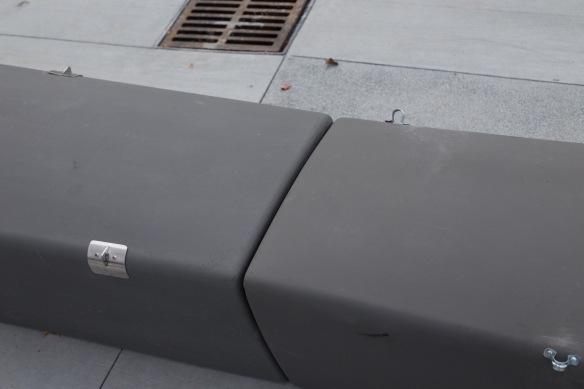 I had to wonder what those are for. Banners, perhaps? Or flags? Or some sort of shade structure in the summer? Or did they just run out of the other fittings? They did cause me think that the plaza may not yet be complete. I do hope that is the case, and that we’re getting a piece of art or an arch or something to really jazz the place up and draw people in.

As I pondered the benches, my train of thought was interrupted when I glanced up and noticed a crowd of people out in front of the Crossing 900 buildings (now Box’s headquarters). I just had to see what was going on, so I jumped up and strode towards the front of the building. Indeed, people were flooding out of 900 Jefferson. (Crossing 900 consists of two buildings. The building that sits on the corner has the address 900 Jefferson, while its sibling is 900 Middlefield.) About half of the crowd was on the open plaza in front of the buildings, while the rest were crossing the street or standing in front of Arya: 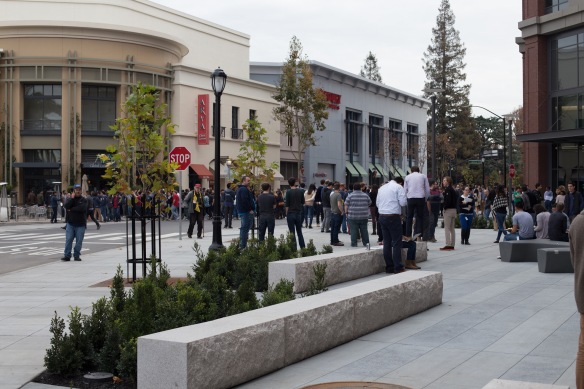 My first thought was that this was just everyone going to lunch: by my watch, it was 12:10. But what company sends all of its employees out to lunch at one time? And several people were holding food, as if their lunch had been interrupted. After a few moments, a Box employee came over to where I and several “Boxers” were standing, and instructed us to head to Courthouse Square. Apparently she assumed that I was a Box employee; I didn’t correct her, since I had every intention of following along anyway. After taking a few more pictures, I joined the crowd—which by then appeared to be somewhere between 100 and 200 people—and we slowly headed down Theatre Way. Many of the people were walking in the street, not realizing that Theatre Way is not just a pedestrian mall (it should be). They quickly jumped onto the sidewalks when a car approached, however. Once the mob reached the open square in front of the historic San Mateo County Courthouse, they clumped on the corner of Broadway and Theatre Way and under the white marquee set up for the Hometown Holidays festival. (Hometown Holidays takes place this Saturday, December 5, at 10:00 a.m. For the complete list of events, see the city’s news release.) 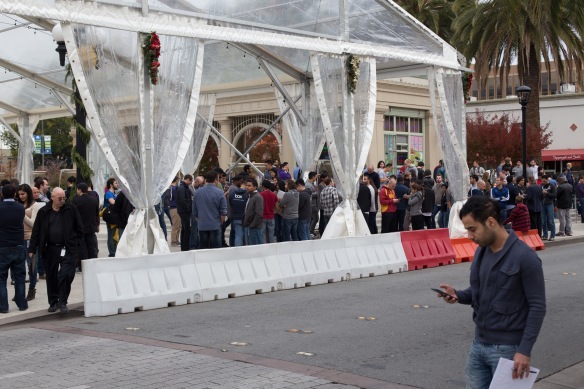 While we were walking, I had made two guesses: that either the company was going to take a group photo, or that this was a safety drill. Given that the Boxers only remained in Courthouse Square for a couple of minutes before dispersing, with no photographers in evidence (besides me, plus one or two people taking photos with their smartphones), I’m 99% sure that this was just a safety drill: that Box was performing a test evacuation to familiarize their employees with the procedure that they should follow in the event of an earthquake or other major disaster. This type of exercise is one that I personally have taken part in at several tech companies I have worked for; Apple, for instance, had us assemble in groups within the parking lots surrounding the Infinite Loop campus, as far from the buildings as we could get. For Box, though, the nearest large open space somewhat away from buildings is Courthouse Square, so that apparently is their designated evacuation area.

The crowd I saw was only a fraction of the total that will eventually occupy Crossing 900. Box apparently has about 1,250 employees. Although some of those people work in overseas offices, I assume that the majority will be working from the company’s new Redwood City home. Add in the employees of the companies to which Box is subleasing space, and we’re looking at quite a lot of people who will be flooding our downtown restaurants at lunch (and, likely, at dinner). Based on their size, I expect that the two buildings combined will ultimately contain between 1,500 and 1,700 people.

Before this all occurred, I had a good chance to peer into the first-floor front windows of both Crossing 900 buildings. Box occupies the entirety of 900 Jefferson, and apparently will be occupying some part of 900 Middlefield as well. I was interested to see that there were other company names on the signs being installed within the lobby of 900 Middlefield. In addition to Box, I saw signs for Pebble (the smartwatch people), Wealthfront (a “software-driven money management service”), and Shopkick (a mobile app that “connects shoppers to physical retail”). For Shopkick the move should be easy: their current headquarters are in Redwood City, at the corner of Main Street and Middlefield Road—only a block from Crossing 900. Pebble is coming from a bit farther away: they have been located in Palo Alto, but are moving their headquarters here, to 900 Middlefield. As for Wealthfront, they, too are currently located in Palo Alto. In their case I don’t know if they are moving or simply expanding into Redwood City. I suspect that it is the latter.

As for what else I saw through the Crossing 900 building windows, other than the main lobbies, all of the street-level rooms seemed to be conference or presentation rooms, or classrooms. I could see tables, wall-mounted video monitors, and ceiling-mounted projectors. Apparently there will be no retail or restaurants for the public to enjoy in either of these two buildings.

What the general public will enjoy, however, is the parking. Between the buildings I was very pleased to see the electronic signs for the parking garage: 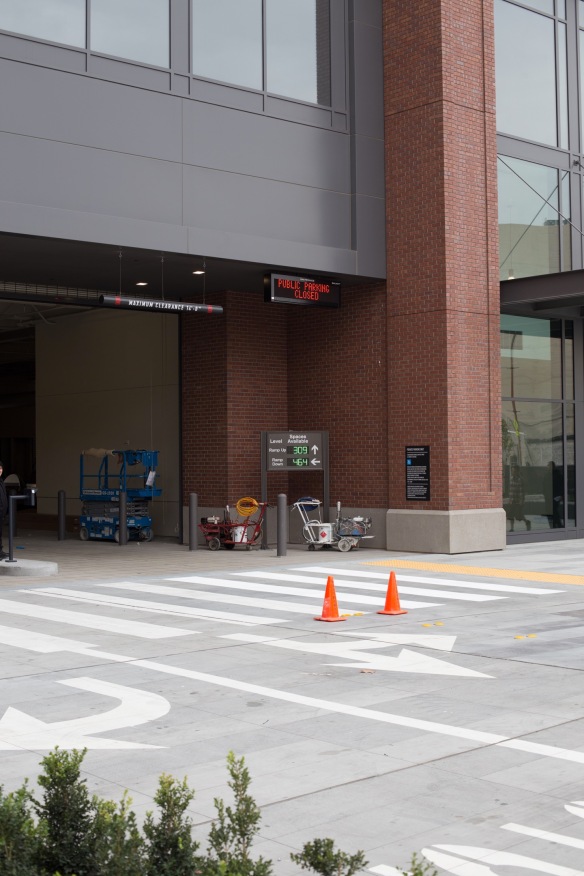 Above the entrance is a very important sign: the one that during the day says “Public Parking Closed”. During working hours the parking garage in the Crossing 900 buildings are strictly for use by the tenants and their guests. During evenings and weekends, however, that sign will change to indicate that the 900-space parking garage is open to the public. And down low, the sign with the green numerals indicates the number of free spaces within the garage. Redwood City’s Jefferson garage (under the Century Theatres building) and Marshall Street garage (across Marshall Street from our main firehouse) will also soon have parking sensors and similar electronic signs. Being able to get some idea of how many spaces are available, and on what floors, of each garage should go a long way towards improving the parking situation in Redwood City.  As for this new garage, I’m looking forward to trying it out. Once we residents begin using it, I expect that many of our problems finding parking on a Friday or Saturday night, at least, will become a thing of the past.

On the subject of parking, the City is doing its best to let everyone know that on Broadway, from El Camino Real to Main Street, parking is now limited to two hours. Full enforcement—that is, parking tickets and associated fines—won’t begin until January 1, but the two-hour limit is officially in force now; parking enforcement personnel are giving out warnings for people who exceed the limit this month. This limit only applies to Broadway, and only between El Camino Real and Main Street. If you need to park for more than two hours, be sure to park in one of the garages or city lots, or on another street.

Getting back to Crossing 900, I’m thrilled that the construction fences around the Crossing 900 buildings are at long last gone: I for one was getting very tired of the traffic limitations that they imposed. I also was getting tired of having to look through or around them in an effort to find out what progress was being made. Construction fences are one of my biggest annoyances, especially now that they universally seem to add the privacy fabric to the chain link fencing.

For two years or so there has been such a fence blocking the northern sidewalk going under the railroad tracks at Jefferson Avenue. I understand the need to protect pedestrians from falling debris during the construction of the Crossing 900 buildings, but it bothered me nonetheless. Fortunately, that fence went away along with the rest of the Crossing 900 construction fencing. Although the folks who removed the fence missed this sign, which detoured you around the fence that blocked the sidewalk: 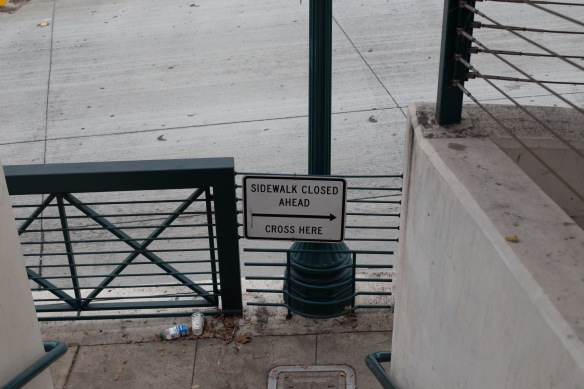 You are faced with this sign if you take the steps down to the sidewalk from the Pier 1 Imports store. Feel free to ignore it! It’ll be interesting to see how long this sign sticks around.

With the construction fences gone from around Crossing 900, now I get to contend with the ones that protect the 815 Hamilton project property. Fortunately, at least for now, the main gates to that project are wide open during the day, making sightseeing an easy task. There isn’t all that much to see at the moment, however. Other than the pile driver that is sinking the metal beams used to form the sides of the new underground parking structure, the only other activity I can see is the removal of part of the dressing room area from the back of the Fox Theatre.This small one-story concrete block structure is being cut roughly in half to accommodate 815 Hamilton: 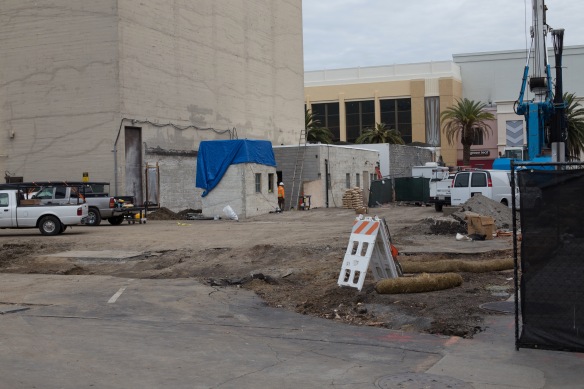 Box and its fellow Crossing 900 occupants are finally here. Our restaurants are starting to feel the impact—our waitress at Timber & Salt last night said that they are starting to get some dinner business directly attributable to Box—but not everyone has moved in yet, so it’s too early to tell how these two new office buildings will truly affect our downtown. I for one am not too worried, though. I’m sure we’ll adjust. And we’ll turn our focus to other projects within the city.