This will be my eighty-first post for Walking Redwood City. When I started this blog it was somewhat informal, but as I’ve gone along I’ve taken it more and more seriously and put an increasing amount of time and effort into it. Shortly after I began reporting on the development projects I was observing, I cobbled together some rudimentary tools to help me track the constantly shifting landscape. Not only do I keep files on the various projects, I also maintain a spreadsheet that lists them all, along with size, status and parking, along with some basic notes.

My spreadsheet allows me at any time to see the current state of all of the major development projects going on around the city. It helps me make some sense of the chaos that we are currently experiencing, especially in our downtown. Especially after a City Council election that seemed to largely hinge on downtown development, I thought it would be helpful to provide a sort of “state of the union” regarding Redwood City’s larger development projects. Feel free to bookmark this post and use it as a sort of scorecard as the projects progress.

To begin, I’m tracking eleven separate development projects that are either actively being worked on or are just about to get started within the Downtown Precise Plan area. Here they are, in order of estimated completion date, with the soonest to be completed listed first:

This project on Franklin, extending from Wilson Street to Monroe Street, is done, really, although as I walked around it yesterday there was still a worker or two doing some cleanup, and there were some plants around back that looked as if they still needed to be planted. The 304-unit apartment building is actively leasing and already has a number of residents living in it.

At long last, this office project is just about complete. Sometime before the end of November the construction fences should come down and the parking garage should be opened to the public on nights, weekends, and holidays, giving us an additional 900 parking spaces downtown when we most need them. Box will move in, and we’ll finally get to see how the addition of hundreds of tech employees will affect our downtown.

Although it is being built by the contractor that built the adjacent Crossing 900 buildings, this “gateway to downtown Redwood City” is otherwise a city project on what I believe is city-owned land. North Plaza appears to be pretty much done; I’m expecting that it’ll open up when the Crossing 900 construction fences come down. Unfortunately this doesn’t appear to be very impressive gateway: just a small triangular plaza with some large landscape pots and a couple of artistic benches. I assume that there’ll be some signage, although there wasn’t any the other day when I walked over to take pictures.

This hard-to-miss 469-unit apartment building at 525 Middlefield Road is scheduled to be completed next January. Its three ten-story towers are still receiving its exterior finishes, but the black “curtains” should soon come down, at which time we’ll get to see what the building actually looks like. The first floor has some storefront office space, which I believe will be occupied by the San Mateo Credit Union (their offices used to be where this building now stands).

Like Indigo, this apartment project located at 601 Main Street is due to wrap up in January. It consists of 196 studio, one- and two-bedroom apartments average 900 square feet in size in an L-shaped, 8-story building. Its ground floor will contain two retail spaces and a leasing office.

This five-story, 133-unit apartment building at the corner of Brewster Avenue and Winslow Street (with a garage entrance on Fuller Street) is currently having stucco applied. Expect it to be done by March 2016.

Scheduled to be completed sometime next spring, this 18-unit condominium complex being built at the corner of Brewster Avenue and Warren Street (just down the street from Fuller Street Apartments) continues to make good progress. It is one of the very few ownership projects going on in Redwood City right now.

All evidence of the old building that once stood here at the corner of Middlefield Road and Winslow Street is gone, and the adjacent parking lot that once was located immediately behind the Fox Theatre was being torn up as I watched. Digging the underground parking garage (that will connect with the Jefferson Avenue underground garage) is next. But just as Crossing 900 is coming online and the construction fences are being taken away, this project has taken its place, restricting traffic on Winslow Street and taking away most of the Winslow Street parking lot for the next year or so. The developer hopes to complete the five story office building by spring 2017.

With Franklin 299 complete, Greystar, the developer, now turns its attention right next door, to its next project at 103 Wilson Street. The construction fences are up, but no other visible work has taken place as yet. I presume that the plan is still to relocate the little blue house on the corner (to a city-owned lot at 611 Heller St.), after which the existing apartment building and the other light industrial buildings on the block will be demolished. Then they’ll build a seven story, 175-unit apartment building on the site. Look for it to be completed by the summer of 2017.

This project falls into the “not yet active” category; I see no evidence of any on-site work being done. The six story office building slated for this site was approved some time ago, however, so I expect that work will get underway very soon. I don’t have a completion date for this particular project.

After much discussion and many, many meetings with both the Planning Commission and the City Council, the eight story office building proposed for the site directly across from the Bank of America received final approval on November 16. Given the amount of time and effort that the developer had to put into receiving project approval, I expect that he’s very eager to get going and thus I expect to see work commence very soon.

In addition to the above-listed projects within our Downtown Precise Plan area, I am also tracking a number of other construction projects elsewhere within the city’s borders. Here are the ones that are underway or are getting started, sorted as best I can guess by their completion dates:

If you drive south on El Camino Real, this project is hard to miss. Located on the corner of El Camino Real and Oakwood Drive, Kensington Place is a 45-unit assisted living facility for seniors with Alzheimer’s disease or other forms of dementia. This project is essentially done, although I will note that workers are still fiddling with the sidewalk and front landscaping.

The county was hoping to have this project wrapped up by mid-2015, but no. The exterior of this building at Maple Street and Highway 101 is looking pretty good these days; there is likely a lot of interior work yet to do, but hopefully they’ll wrap this one up early in the new year.

Located on Bair Island Road between the One Marina condominiums and Highway 101, this 177-room, five story hotel was planned to be complete in early 2016. However, they appear to be behind schedule. I would expect to see it open about a year from now, in late 2016.

La Palma is a small subdivision that will contain twelve single-family homes being built on three very deep lots on Kentfield Avenue, just up from Woodside Road. 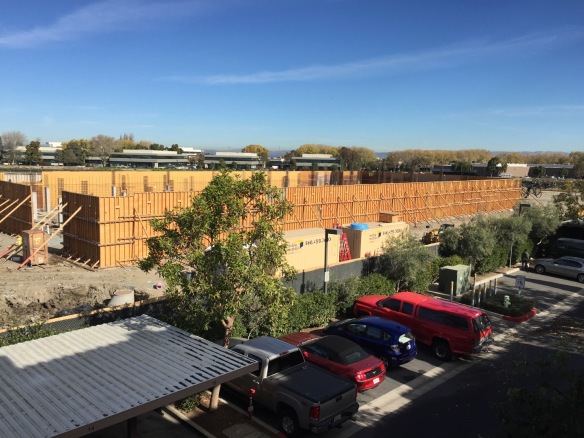 The forms are going up for the seven-story parking garage. The garage will then be wrapped by 311 apartments of varying sizes, from studios to 3-bedroom, 2-bath units. Elsewhere on the property formerly known as Pete’s Harbor, there will be ten smaller buildings containing ten apartments each, plus surface parking. The developer began this project by constructing the inner marina, after which they built up the surrounding land to make it suitable for building. While I don’t have a completion date for this project, I will note that the developer has an online waiting list for those interested in leasing, and they say that “pre-leasing” will begin in early 2016. Given the progress so far, however, I’m guessing that people won’t be moving in until early 2017.

The long-empty lot on El Camino Real next to Mountain Mike’s Pizza is finally seeing some signs of life! While driving by on Friday I noticed that a handful of stakes have been hammered into the ground. I’ll need to walk over and take a closer look, but I’m guessing that they mark the corners of the two buildings that will eventually contain twelve townhouses. Hopefully the San Mateo-based developer, Regis Homes, will soon be breaking ground on this small housing development.

I am tracking a number of other projects beyond what I’ve listed above (the Finger Avenue development, the Laurel Way Joint Venture, 2075 Broadway, Stanford in Redwood City, etc.), but those are either not yet approved or they have yet to put a shovel in the ground. But I’m delighted to report that Habitat for Humanity has just submitted their application to the city Planning Department. This is the first step toward getting this twenty-unit condominium project off the ground. Although the proposal is for a six-story building in our downtown (at 612 Jefferson Avenue) given that it will provide an ownership opportunity to twenty low-income families, and given that the city has already made a sizable investment in the project, I expect that there won’t be much, if any, pushback either from the Planning Commission or the City Council. Expect it to get underway sometime in 2016.

Redwood City has a lot going on right now, development-wise. New approvals may well slow down with the inauguration of the new city council members, but as you can see the members of our building trades will have plenty to do over the next year or two regardless. And throughout, you can bet I’ll be updating my spreadsheets and continuing to keep score.