Last Monday’s City Council meeting was almost entirely about low-income housing, but I’m going to save that for a future post (actually, multiple posts). Instead, I want to talk about the Inner Harbor. At one time I worked for NeXT, Inc. Our offices were on Chesapeake Drive, just off Seaport Boulevard. This being adjacent to Redwood City’s Inner Harbor area, I not only commuted through it but also spent a great many lunch hours exploring the Inner Harbor on foot. Thus, when I heard that the “Inner Harbor Task Force” was creating an overall plan for the area, I sat up and took notice. I’m glad I did, since what is being planned has the potential to add to our parks and give us some great new ways to access and enjoy the San Francisco Bay.

The Inner Harbor Task Force held public meetings for about a year, starting in mid-2013. I attended a number of them out at the Seaport Conference Center on Seaport Court. The meetings followed a guided process, starting with the needs of the various stakeholders (including the businesses in the area, the property owners, members of the Docktown floating-home community, as well as people representing the greater Redwood City community). They then itemized the challenges posed by the location itself, including the difficulties in getting to the area, as well as how sea-level rise would affect the Inner Harbor in the future. Finally, proposals were brought forth to enable the desired uses and to deal with the various challenges. But given the diverse needs of the stakeholders, nothing close to unanimity was reached on many of the proposals, much less a cohesive plan for the area. Given the widely opposing opinions that were aired, I wondered how they ever could come up with a single plan—and I was extremely curious to see just what such a plan might be.

Finally, almost two-and-a-half years after the process began, the city has finally published a draft of a 200-page plan for Redwood City’s Inner Harbor. It is accompanied by some 850 pages of comments received thus far plus a 725-page draft Environmental Impact Report. We, the community, are being given 90 days to review the material; send in your comments via email to innerharbor@redwoodcity.org. Or, attend the December 1 Planning Commission meeting and comment in person. Although I have not been able to read all 1,700+ pages, I have gone through the 200-page plan itself, and will highlight some of the more interesting elements below.

First off, what do we mean by “Inner Harbor”? Here is the map they included in the plan, identifying the 100-acre Inner Harbor area (outlined in red) and identifying, by colors, how the land is currently being used: 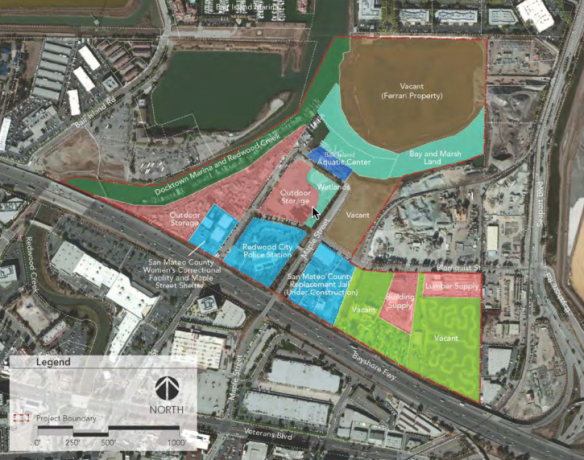 So, what is the plan? First off, Docktown. This community of 70 or so floating homes (shown above) currently lines the southeastern bank of Redwood Creek. Unfortunately, there is some question as to their legal right to be there. No one appears to be forcing them out in the short-term, but in an apparent attempt to avoid any legal entanglements (or, at least, a protracted battle with the State Lands Commission) while still maintaining a floating home community—which the Task Force and the plan seem very much in favor of—the plan recommends turning the nearby “Ferrari Property”, which seems to be wetlands now, into a marina for floating homes. This would remove the floating homes from the state-controlled Redwood Creek, and put them in a marina that has proper facilities (currently, only a small number of the floating homes in Docktown have sewer hookups; the rest have to rely on a pump-out service). As well, the new marina would have no issues with access or parking (Docktown’s parking lot is owned by a private party; the homeowners could lose their right to park there and indeed their ability to easily access their homes from that side of the creek). Of course, constructing a new marina would take time and money, and it seems likely that the cost to moor a home in the new marina would be higher than the costs at Docktown today. Given that Docktown is perhaps the cheapest place that one can own their own home within Redwood City, the City would do well to ensure that docking fees remain somewhat reasonable.

With Docktown relocated, and assuming that the Women’s Correctional Facility and Maple Street Shelter have moved, the plan anticipates that the triangular property along the creek (labeled “Storage” in the picture) would become house a new residential development.

On either side of Maple Street, the property adjacent to the Police Department and the property across Maple currently being used to facilitate construction of the Maple Street Correctional Center (but marked “Vacant” on the picture) would both become recreational fields and picnic areas. Between these fields and the water (Steinberger Slough) would be a “promenade” that would incorporate the existing Aquatic Center, plus a boat house and places to get snacks or rent kayaks. This promenade would continue as a walkway along Redwood Creek that would cross over the creek, providing a connection to the San Francisco Bay Trail.

Finally, the lime-green section labeled “Vacant” along with the two pink-shaded parcels (“Building Supply” and “Lumber Supply”) would likely become a high-tech office campus: in excess of one million square feet of office space divided into a handful of multi-story buildings in a campus-like setting called Harbor View Place.

Here is the rendering of the plan as it is envisioned by the consulting firm hired by the City to prepare the draft: 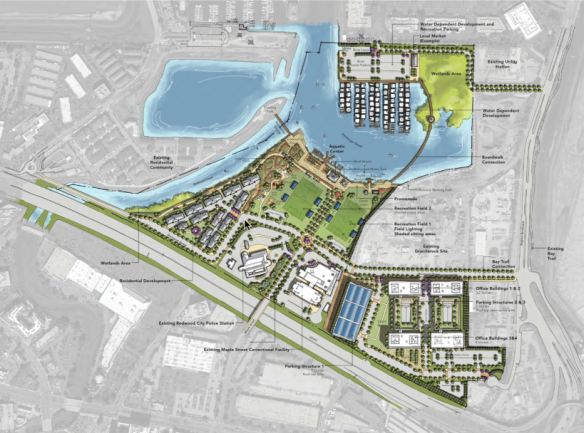 It sure is a pretty picture, isn’t it? Of course, we have to remember that this just a “vision” for the area. If the plan is approved by the Planning Commission and the City Council, rules will be enacted that will require developers in the Inner Harbor area to build congruent with the plan. But all this will take a great deal of time, and will be subject to private developers and city budgets. Thus what we get may or may not look much like this rendering.

I do want to point out some transportation-related portions of the plan, as they will significantly improve how we get to and around the area. This image highlights the public roads as they would be in their new configurations:

The biggest takeaway is something that I felt was a foregone conclusion: the so-called “Blomquist extension.” Currently, Blomquist Street runs from Seaport Boulevard to Maple Street, where it dead-ends. As envisioned by the plan, Blomquist would meet Maple Street at a roundabout, after which it would jog around the housing development and then connect up with Bair Island Road at the roundabout between the Boardwalk Auto dealerships and the new hotel. This would enable access to the Inner Harbor area not only from Seaport and from Maple, but from Whipple Avenue as well. And residents of One Marina and Blu Harbor, who currently have Whipple Avenue for their only means of entrance and egress, would gain a second way in and out, via Blomquist.

Also note the streets marked “Lane A” and “Lane B”. Today, Maple Street continues on past Blomquist along the Lane A alignment to provide access to Docktown, the Maple Street Shelter, and the Women’s Correctional Center. In this plan “Lane A” would simply be a means to provide passenger and small craft pickup and drop-off at the Promenade area. Access to areas such as the new residential development and the parking lots associated with the new play fields would be from Blomquist Street.

Parking lots. I mentioned that there were parking lots associated with the play fields: look closely at the plan rendering and you’ll see them along Blomquist Street. But you do have to look closely, for the simple reason that these lots are not large. Looking at the plan as a whole, you see a lot of green, and not much gray: there is parking for the residential development, the relocated floating-home community, for the Police Station and Maple Street Correctional Center, and of course parking for Harbor View Place. But for those of us who neither work nor reside there, parking is pretty limited. Beyond the two small lots associated with the play fields, there is also some on-street parking along Blomquist—but only from Maple Street to the corner where Blomquist meets the residential development. There does not appear to be any on-street parking along the remainder of Blomquist. Nor is there any along Maple or along Lane A or Lane B.

Not having much parking is consistent with the current desire to force people to leave their cars at home, if possible, and get to the area another way. If you live within the Inner Harbor area, walking should be quite easy. For those residents of the floating home community on the old Ferrari property, the plan assumes a boardwalk connecting the two parts of the Inner Harbor, simplifying the connection between the Chesapeake Drive area and the Inner Harbor. As well, the plan calls for a pedestrian bridge between the Promenade and the small park at the tip of the One Marina community; this, along with a sidewalk that adjoins the Blomquist extension, would make walking between the One Marina area and the Inner Harbor an easy matter. But what about those of us who live across 101?

I often walk across 101 in order to explore the parts of Redwood City’s by the Bay, and I most often use the Maple Street over-crossing. Not because it has great sidewalks—they’re nonexistent leading up to 101, and minimal on the bridge across it—but because there is very little vehicular traffic, so I feel much safer. Crossing over 101 at Whipple, or under it at Woodside, are both pretty dangerous in my experience. While Maple Street itself may be upgraded, the over-crossing itself is not likely to be changing any time soon. As for Woodside, the Woodside Road/Highway 101 interchange is being studied and will presumably be rebuilt someday, but we aren’t likely to see activity on this for years to come. The only possible solutions, it appears, are either an underpass near Woodside where the freight tracks run under the freeway, a pedestrian over-crossing where Walnut dead-ends into 101, or both.

Of course, walking to the area isn’t the only answer: mass transit can play a part as well. The plan suggests additional bus and shuttle stops, and presumably increased service. As well, there has been some talk about a light rail of some sort, so that could be part of the solution as well.

The Redwood City Inner Harbor Specific Plan is an interesting document full of numerous little details. But so many people have a stake in the area—either because they live there, they work there, they own property there, or they simply spend recreational time there—that a plan for such an area can at best be a compromise. It will be interesting to see how people react to it, and thus what the city ultimately does with the property. I do commend the overall idea to spruce up the area and make it much more accessible to those of us who don’t live or work there. Historically, our access to the Bay has been pivotal to the development of the city, and this plan—or one like it—would allow us to more easily celebrate our connection to the Bay.

5 thoughts on “Such a Pretty Picture”